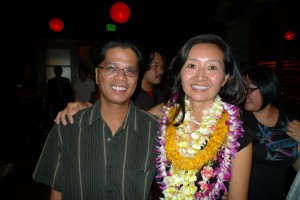 This blog is a little late because as you might guess, I passed out on my face after the launch party last night. Can you blame me? It was a fantastic evening, and I — we — are so grateful to everyone who came out and supported us. More importantly, we’re grateful to everyone who supports us every day by coming to this site. Every one of you got us to 1 million page views in just 23 days, no small feat for a little team like ours building from the ground up.

What struck me last night, other than the sheer size of the crowd, was the wide range of people who came. There were media, our “geek” friends, older people, young people, friends, frenemies, scenesters, homebodies (who got out just for the party), people dressed to the nines, people in shorts & slippers, and more. Many people only knew each other through social networks and were meeting each other for the first time in person.

And that is one of the magical things about events like these, that bring our online communities together. The people who make it to these real-life events, no matter how introverted or extroverted, have a real interest in the people and the world around them. And even after we go back to our respective computers, we’re all better people for reaching out to each other in the first place.

I tried to push out some photos during the evening to give people a glimpse of the party if they couldn’t make it. Here are some of the photos that posted to Facebook and Twitter, as we worked simultaneously to get a “Swarm” badge on Foursquare, as well.

The calm before the storm

I was the first to arrive, so I got to talk story a bit with Ka Managing Partner Bryan Yoshida.

You’ve already seen the complete gallery of party pics from last night, but here are some of my own. I tried taking out some of the redundant ones, but I’m pretty tired so I may have missed some! Also, I painstakingly put captions on every single photo, but a blip in internet service wiped them all out. So … I’m just posting these already!

Big, big mahalos to Bryan Yoshida and the staff at Ka for this wonderful party. They were there for us when we closed up shop, and were so great in helping us re-open our virtual doors. Here’s to more great events!