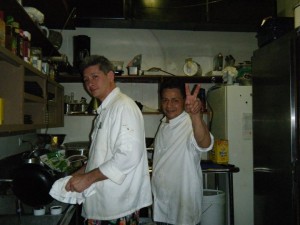 Back in the 90s, I was a banquet waitress at the Hawaiian Regent (the predecessor to the Waikiki Marriott) to supplement my income as a vice president at a PR agency. On nights when a lot of us were off, we would sometimes go to Paul & Terry’s Place in the Chinese Cultural Plaza for cheap drinks, darts, and karaoke. It was a super laid-back, hole-in-the-wall joint that was kind of a hidden gem. Oh, yeah, and did I mention cheap drinks?

Well, fast forward: Paul has retired, and Terry Kakazu re-named the bar Terry’s Place a few months ago. She also brought in a couple of chefs who wanted to experiment with menu items (pictured at right). I can’t mention their names because they work at other places, but Terry did let me grab this shot off that fabulous resource for investigative reporting—Facebook. So if you’ve seen them around town, you know who these semi-secret, self-titled “underground chefs” are.

Terry's Place doesn't really get hopping till later in the evening, so if you get there at 5 p.m., it's empty. The patrons are all regulars, so it's kind of like walking into the bar from "Cheers."

At first glance, Terry’s Place is the same hole-in-the-wall that I knew 15 years ago. But if you sit with your bottle of HASR wine and plate of rib eye steak, you’ll see it’s matured with underlying sparks of sophistication. Kind of like me.