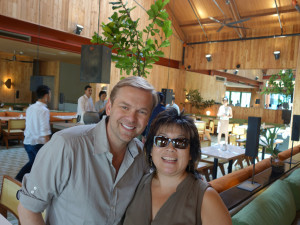 I got to meet Bill Granger at his new restaurant yesterday.

I had never heard of bill’s Sydney (yes, with the lower case “b”) until I got wind of it opening its first Hawaii branch this month, but for foodies in the know, it’s a famous restaurant owned by an equally famous Aussie restaurateur … and a welcome addition to Honolulu’s dining scene. Chef/food writer/television host Bill Granger is opening his long-awaited Waikiki restaurant tomorrow, and I got a sneak preview.

Granger has been called the “egg master of Sydney” by the New York Times because of his famous scrambled eggs — which you’ll see in the gallery below — and subsequently people think of bill’s as a breakfast spot. It’s actually more of a casual-smart cafe with all-day dining, featuring a bar/coffee bar with take-away items on the first floor, and table service upstairs. According to Granger, this new location has been “years in the making,” and since he’s into surf culture, the vibe is casual, but the overall design is pretty sophisticated.

Here’s what we ate yesterday, pretty much in order of our favorites, plus a few dishes that I wanted to try but people (ahem) snarfed up before I got a bite. There’s always tomorrow.

bill's Sydney is located in Waikiki, so it will be a little tricky for locals, but is worth the trek. You can find parking across the street in the Bank of Hawaii building; at this writing I'm not sure about validation costs because the parking stamp doesn't arrive until today.

These photos were just the highlights. For more photos, click here.

Is Popeyes chicken sandwich worth all the hype?