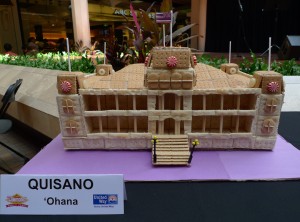 This blog has given me the opportunity to experience a lot of different adventures … and if you’ve been reading me for a while, you know that I love the quirky stuff. So when PR divas Susan Sunderland and Sandi Yara asked me to be a judge in the Diamond Bakery Make & Bake contest, I jumped at the chance.

On Saturday, Diamond Bakery held their annual Make & Bake contest at Ala Moana’s Centerstage, which benefits the Aloha United Way. Each team had to make a structure out of their crackers and cookies beforehand and bring it to the event. They also had to make a dessert or pupu using Diamond Bakery products.

Interestingly enough, the teams had to excel in both cooking as well as the building. I wondered, “What if someone isn’t a good cook, but makes a fantastic structure? Or vice versa?” As it turned out, the cooking and building skills were pretty close.

Royal eggplant quiche. This was delish and I hadn't had breakfast, so I wanted to eat the whole thing.

Russ Sumida dropped by to watch the contest and said that he was watching me in my new profession: judging food contests. He may be on to something! On November 7, I’ll be judging a country stew contest at Waimalu Plaza.

After the Diamond Bakery gig, I went over to Pearlridge to watch the American Institute of Architects – Honolulu’s annual “Canstruction” contest, which benefits the Hawaii Foodbank. Each team has to make a giant structure out of canned goods and stick to the theme. This year, the theme was “Kids CAN!,” so the structures were geared toward things related to kids — a happy meal, Oscar the Grouch, etc.

Each structure also has to be planned to create an actual meal, so they can’t just pull the cheapest or the most colorful cans.

If you’d like to see the gigantic can structures, they’ll be on display at Pearlridge Uptown till October 3, at which time they will be “de-canstructed” and donated to the Hawaii Foodbank. You can vote on your favorites; for every can you bring, you get one vote. The winners will be announced at the end of the display.

My recent blog posts
The social side of social media
Not your typical school lunch
The Willows’ Anniversary Party
Dinner at Azul
Fia Fia at the Ihilani
Tairyo’s grand opening party
Chinee like me: Dining at Lobster King
Okinawan Festival 2010
Grand opening of Sephora Waikiki
BYOB at the Burger Co.