Asahikawa is considered simply a transit point for travelers to get to other cities around Hokkaido — if anything, a place you might spend one night at most. But you could easily spend a few great days here shopping, eating, and sightseeing.

Our first impression was a good one: Upon checking in at the Loisir Hotel Asahikawa, for which we paid about $75 (!!!) per night, we found that the staff is pretty good at English — more so than our Sapporo hotel. There are also signs in Japanese and English, which helped a lot. And best of all, as you can see in this video, there’s free wifi for guests not just in the lobby, but in the room. And the wifi was pretty fast!

Our next impressions were pretty good, too, as you’ll see in the following galleries. Asahikawa is best known for its zoo, and since it’s so far north is supposed to have an awesome array of cold-weather animals. However, the zoo closes twice a year for maintenance, and we arrived during one of those times. You can also visit one of the Ainu Museums (which was also closed when we were there), probably a significant stop for Hawaii visitors as these showcase the indigenous people of Japan and Russia. If you’re into crafts and woodwork, Asahikawa is known for that; we aren’t into it, so I can’t tell you what is available, but a quick search online will take you to listings for furniture and even the traditional textile fabric of Hokkaido. If you’re into shopping, the famous Heiwa Dori pedestrian mall that runs straight up from the train station is full of boutiques, department stores, and restaurants.

If you just want to relax and take in beautiful sights, there’s a Russian-Japanese Green Park behind the Loisir Hotel with sculptures and trellises; there are various temples; and you’ll find art throughout the city (literally, as you walk down the street).

Like everywhere else we found, Asahikawa has its share of ramen restaurants, so it’s hard to choose. If you do a search online you will also find listings for the Ramen Village, but it turns out this place is about 40 minutes outside of town.

But, back to the reason we were in Asahikawa: To visit the Otokoyama sake brewery. Our friends at The Sake Shop (@Sakeshop) on King Street helped us arrange a tour, and the president himself — Mr. Yokichi Yamazaki — took us around. His manager, Takako Iwabuchi, and Yousuke Isono, also came with us on the tour. Here’s a video of what we saw. It’s a little jerky since I was doing it on my iphone and juggling my camera, but I think you get a good idea of how their sake is made.

Here’s a gallery to show the rest of it.

The 400-year-old brand is probably the most well-known sake in Japan and in the world, and their brewery is just 15 to 20 minutes from the Asahikawa train station.

And, here’s the rest of Asahikawa’s highlights. If you want to see all of my photos, click here.

On the advice of online guides and our Twitter friend @Tanikaze, we checked out Santouka, a ramen shop toward the train station. (It's also spelled Santoka on various sites.) 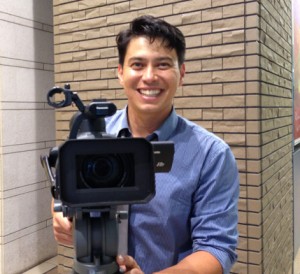 To get to Asahikawa: Go to JR Sapporo Station and catch the Super Kamui, which runs every half hour to Asahikawa. The ride is about 1.5 hours.

By the way, we met up with Taizo Braden of KHON at JR Sapporo Station as we were transferring from Noboribetsu to Asahikawa. He interviewed me for a segment in his own Sapporo series. Click here to see it!

Up next on Monday: Back to Sapporo City, then a round up of our favorites and tips.