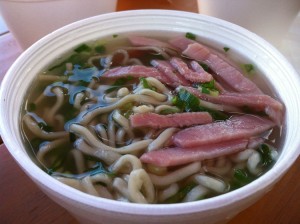 And we’re not afraid to debate them, either.

Case in point: Nonstop’s Mari Taketa (@nonstopmari) sparked a spirited online debate with her blog about saimin — and how much she doesn’t like it.

Ask anyone from the Islands and they’re tell you where to get the best saimin, ramen, oxtail soup, pad Thai, pho, chow mein. You name a noodle dish, and local folks will have something to say.

Even when it comes down to the noodles themselves.

I was talking with Rainbow Drive-In owner Jim Gusukuma the other day and he mentioned that he switched the saimin noodles he had been serving from flat to curly noodles.

“It makes a difference,” he said, smiling.

Is that true? Do noodles make that much of a difference? And are saimin noodles — slightly thicker than fine Chinese egg noodles and ideally a bit chewy — really better curly?

What's on the menu at Saturday's Festa Italiana

Is Popeyes chicken sandwich worth all the hype?