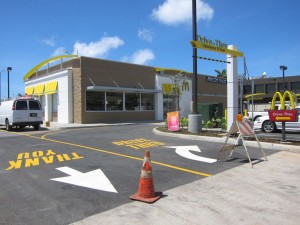 Forty-three years ago, McDonald’s opened its first restaurant in Hawaii — in Aina Haina.

Seems like a strange neighborhood to open the first McDonald’s — why not the higher traffic areas of Waikiki or Ala Moana Center? — but it quickly became an icon in East Honolulu, the gateway, if you will, to the quickly expanding Hawaii Kai.

But today this landmark in Aina Haina will be torn down, making way for the newer, sleeker, one-story version opening just steps away. It features an outside seating area, a double-lane drive-thru and a roof that doesn’t leak. 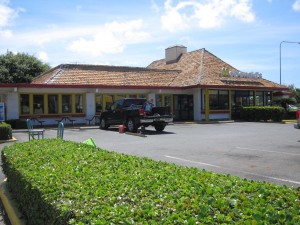 The old-style peak roof — this is one of the last restaurants with this design — won’t beckon you to grab a Big Mac on your drive home. Another icon in Hawaii — a part of history — will be gone.

It made me think about change — and whether change is actually good.

As most of you know, I’m leaving Nonstop Honolulu tomorrow to embark on my own blog and get back into the kind of longer-form writing that I enjoy. But it’s a risk. Leaving Nonstop was easily one of the toughest decisions I’ve made — ask my mom and boyfriend, who had to deal with my agony and migraines — but sometimes change is necessary.

Like McDonald’s in Aina Haina, I’m leaving, but I’ll still be close by, offering the same menu and service but in a different location.

McDonald’s is offering 43-cent soft drinks today at its new restaurant in Aina Haina to celebrate its grand opening. (Too bad it didn’t reduce its menu prices to what it was when it first opened. That would mean 19-cent hamburgers and 25-cent fries.)

Our go-to: Foods of summer