Editor’s note: Catherine Toth is back on Nonstop. Although she’ll be blogging primarily on her own site, thecatdish.com, Nonstop will run some of her posts and also her weekly Cat Chat video segment. 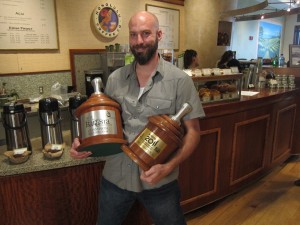 It’s not everyday you get your cup of coffee made by the country’s best barista.

Really, Pete Licata, the coffee quality manager and barista trainer at the Honolulu Coffee Co. at Ala Moana Center — and reigning U.S. barista champ who placed second in the world this month — only works five days a week.

Originally from Kansas — and a huge beer connoisseur — Licata earned the runner-up spot at the World Barista Championship held earlier this month in Bogota, Colombia. Competing as the U.S. champ, Licata progressed through the field of 54 baristas to reach the final round, pitted against five other finalists from Japan, Spain, Australia, El Salvador and the United Kingdom. They each prepared four espressos, four cappuccinos and four original signature coffee drinks to exacting standards in a 15-minute performance judged by an expert panel. Licata lost to Alejandro Mendez of El Salvador to become the first Hawaii barista to ever make it that far in a world competition.

And he’ll make you a soy latte if you catch him on his shift.

We stopped by to chat with the second-best barista on the planet and got him to brew us some coffee, too.

Check out more photos of Licata in action, visit The Cat Dish.