I honestly had no idea what to expect going into “Train to Busan.” When I received the invitation to review the screener, all I saw was a poster of a man clutching his young daughter as they ran from what looked like a huge train wreck. Oh cool, I thought. Another fun Korean action movie! Maybe it would be like “Under Siege 2”!

Then I started watching. The first jolt came during the opening scene when a deer jumps to life after getting run over by a truck. Its milky glazed eyes are a tip-off that something is weird. The main characters board a KTX train to Busan and a young girl running hysterically jumps on board. She’s obviously injured and at death’s door. And then it happens. Her body jerks, her neck cracks and folds in ways it shouldn’t. And she chomps down on the neck of a worker trying to help her. 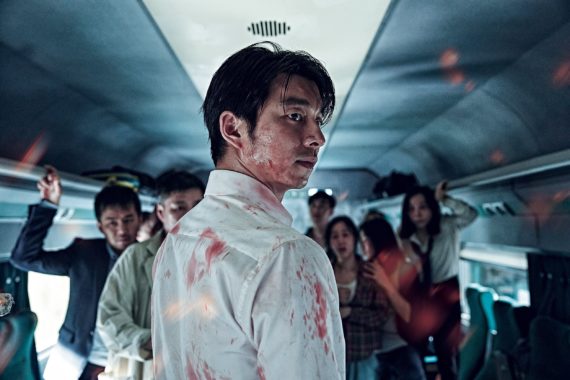 I’ve seen many Korean ghost and spirit films but I’ve never been aware of any attempts at a zombie movie. With my curiosity piqued, I sat up in my seat, hoping for a horrifying and fun time.

“Train to Busan” is like “World War Z” meets “Snowpiercer.” Most of the action takes place on a train with the terrifyingly quick zombies eager to munch on any humans they can sink their decayed teeth into. Human characters are introduced with minor back stories and you instantly try to figure out who will die and who will survive. Some are obvious zombie food, but the standouts are tough guy Ma Dong Suk and his pregnant wife Jung Yu Mi. I loved their chemistry and toughness when fighting the zombies. Ma especially comes off well. He’s obviously afraid, yet all he cares about is protecting his wife and their future daughter.

Star Gong Yu is also effective as the lead, convincingly playing a selfish jerk who is able to realize that his daughter for once needs to come first. And I have to mention the villain. The character doesn’t have a name but is easily one of the biggest assholes in cinema history. When the film nears its conclusion, you will be praying for him to suffer a miserable death. 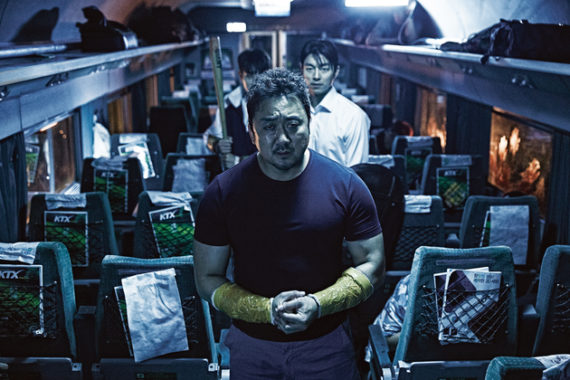 The action scenes with the zombies are executed surprisingly well. First-time feature director Yeon Sang Ho does a great job of orchestrating some really fierce zombie attacks, which can be challenging given the confined train setting. The rules of the zombies are quickly established and they remain consistent. A scene where the passengers must make their way through four zombie-filled cars to get to their loved ones is especially intense yet fun to watch.

The plot does get out of hand toward the end and as with many Korean films, the run time feels a tad too long. But overall, I had a bunch of fun with “Train to Busan.”

“Train to Busan” opens in theaters tomorrow at the Consolidated Theatres Pearlridge 16.