Why do you like saimin? I’m assuming you do, because I’m the only human I know who hates it.

I hate it on a plate. I hate it in a bowl. I hate saimin so much, I will eat any bowl of noodles — Japanese, Chinese, Vietnamese, Korean, Thai — before I’ll even consider saimin. In fact, the fact that I love noodles and hate saimin makes me resent saimin even more.

You know what else? It’s hard to be a local in Hawaii and hate saimin. You might as well hate air. To hate saimin is even more un-local than hating Spam, which after all wasn’t born in the islands. 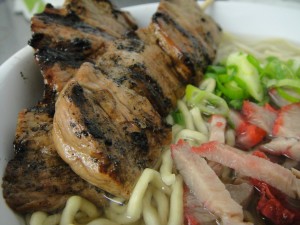 Saimin is hallowed. It’s from the plantations, where immigrants like my great-grandparents cooked it up with the meager things they had on hand, like dried shrimps and kamaboko fishcake. And it’s part of growing up in Hawaii.

Which is why I think it gets so much hype. I’m seriously wondering if the mass taste buds of Hawaii slip back into reveries of childhood and going out with the gang after UH football games every time they slurp up the soggy noodles, so much so that they overlook my seriously considered conclusions about saimin:

1. The broth is meh. It always is. I have yet to meet a saimin broth that makes me swoon.

2. The toppings are meh. Get real, fishcake?! Green onion? Even the fancy stuff: Spam and char siu, ooh.

3. The noodles, with two exceptions, are beyond meh. Mushy and tasting of nothing more than wheat and salt, or firm and tasting of a factory. The two exceptions I’ve encountered are Shige’s in Wahiawa and Nakai Saimin on Nuuanu, both delicately silky and ultimately slurp-worthy.

No, I’ve never tried Hamura’s. Or that place in Hilo. I have tried five places on Oahu, late last year in fact, when the assignment to rank the best saimin on the island for Metromix fell in my lap. Actually, it was my idea, suggested specifically for anyone else. I’m still confused about how the pitch boomeranged, but anyway I found myself staring into a future of endless bowls of saimin.

I rallied. I would be like Jeffrey Steingarten, the pompous and brutal head judge on Iron Chef America. When he landed the job of food critic for Vogue, the first thing he did was confront the foods he despised most, starting with kimchee. He forced himself to eat it, as often as he could, every kind he could find, until he got used to it, then got to like it, and then got to know the distinctions. Now, he says, Korea’s national pickle is his national pickle, too.

As with pizza, finding people to go saimin-hunting with me wasn’t hard. Everywhere we went, I tasted bowl after bowl. At first I assumed I just hadn’t found the island’s best saimin yet. After five restaurants, I realized I had yet to find a bowl I even liked. And I was running out of saimin shops.

It wasn’t me, then, it was saimin. The more I thought about it, the more I resented saimin. What kind of mass deception was it pulling on the people of Hawaii?

That’s why Ed Morita ended up taking over the gallery. He did a great job. He actually appreciated the separate qualities of noodles, broth and toppings, and he came out with a surprise No. 1, the oxtail saimin at Violet’s Grill.

But my original question remains: What is it about saimin? Is it truly delicious, or does nostalgia flavor your bowl? Do you cut saimin some slack because it’s hallowed? Is it really just OK?

Someone please explain. I really want to know.

See also: Saimin: I get it

Local food is back