I’m 75 percent Okinawan, but I’d never been to the motherland. So when my full-Okinawan grandma wanted to make one last pilgrimage with my family before traveling became too hard for her, I jumped at the chance.

Okinawa turned out to be night and day to the 205-mile an hour pace we experienced in Japan. We only had 30 hours to soak up all the sunny island had to offer between two legs in Nihon, so we made sure our short stay was packed. We saw some sights, participated in a few cultural activities and ate as much as we could but those 30 hours were more than just culture and a belly full of food.

1 p.m. Touchdown in Naha, Okinawa’s capital. The 89 percent humidity hits us like a wall as soon as we step off the plane. First thought: “I hope I survive the next one and a half days without getting dehydrated.”

Okinawa reminds me a lot of Hawaii because of its slow pace and laid-back vibe. Our tour guide, who we met in the airport, tells us the humidity gets unbearably worse as summer progresses, especially because typhoon season starts in July. Yikes. 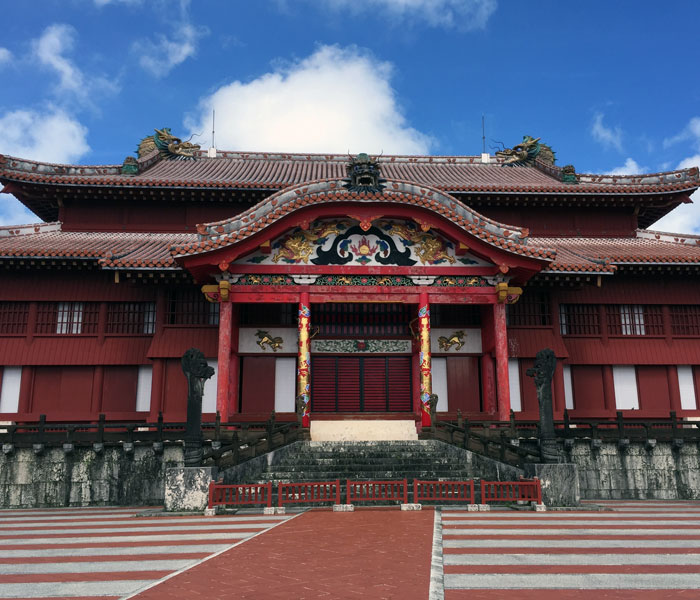 You can really see how the castle’s structure was heavily influenced by Chinese architecture, as opposed to Japanese standards. Our tour guide says Okinawa as a whole has tons of Chinese influence due to its trading relationship.

2 p.m. Tour of Shurijo Castle, a well-known Okinawan landmark that was once the palace of the Ryukyu Kingdom. According to our tour guide, the castle was destroyed during the Battle of Okinawa in 1945 but it was reconstructed on its original site in 1992. Shuri Castle is also the only structure that’s printed on Japanese yen as a symbol of its historical significance. We toured the inner rooms of the castle and we even caught a traditional Okinawan dance on our way out. 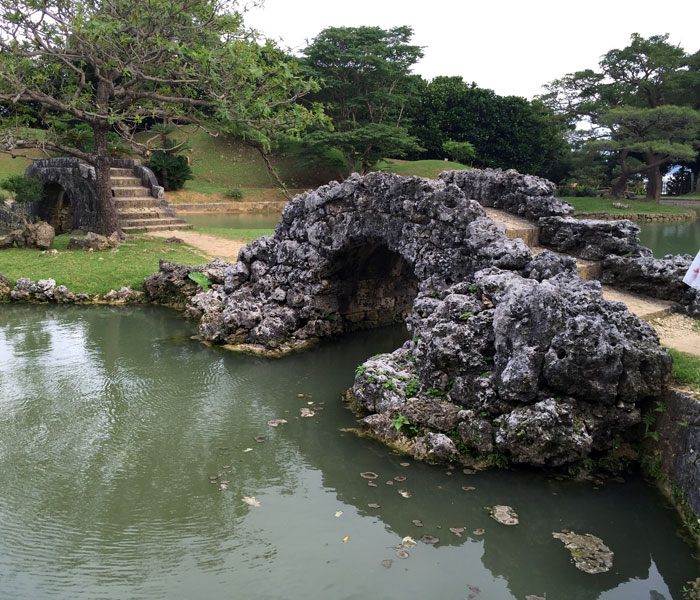 The two stone bridges are meant to show balance and harmony, as one is rough and one is smooth.

4:15 p.m. Brief walk through Shikinaen Garden to enjoy the shade and lush scenery. It’s completely different from the frenzied pace we encountered in Japan. 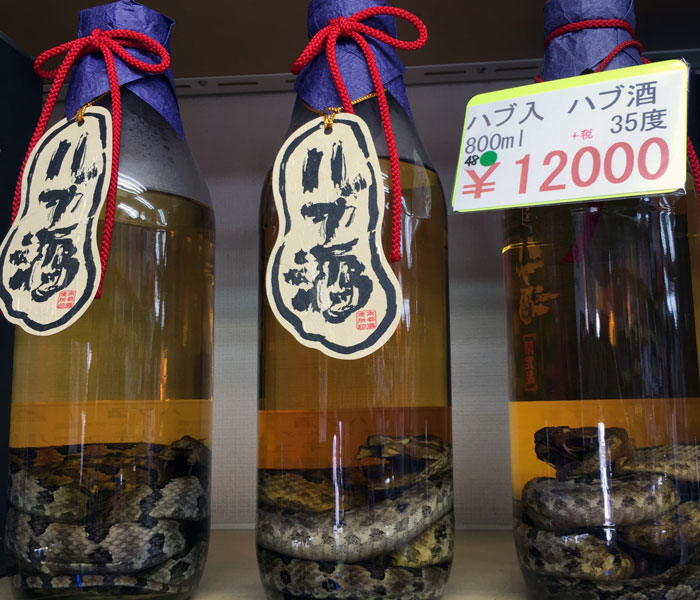 Habushu or Okinawan snake wine is available at many shops

Our tour guide explains that habu snakes usually come out when it’s cooler in the early morning or late evenings and she cautioned us to keep an eye out for them if we’re out late. Habu are related to rattlesnakes and are used as the base for habushu, an awamori-based liquor. Awamori is an alcoholic beverage unique to Okinawa that is characteristically strong. Many brands of habushu are sold with the snake still inside the bottle. Don’t even think about bringing this omiyage back. 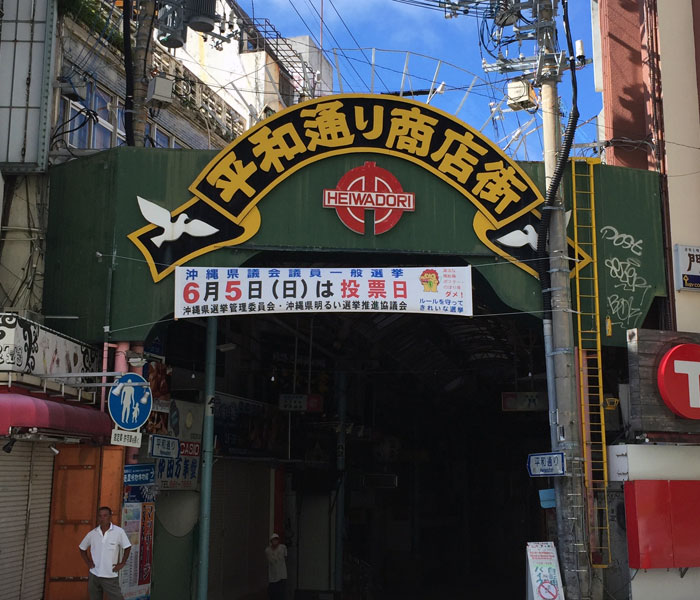 One of the signs that herald an entrance to International Street.

5 p.m. We made our way to International Street, better known as Kokusai Dori, which is packed with hundreds of shops and restaurants ranging from Starbucks coffee shops to local eateries serving traditional Okinawan fare.

Mom scheduled us to do our own shisa lion paintings at one of the local stores. Shisa, or lion-dogs, are an integral part of Okinawan culture and are often found near the entryways of homes and shops as symbols of strength and to ward off evil spirits. 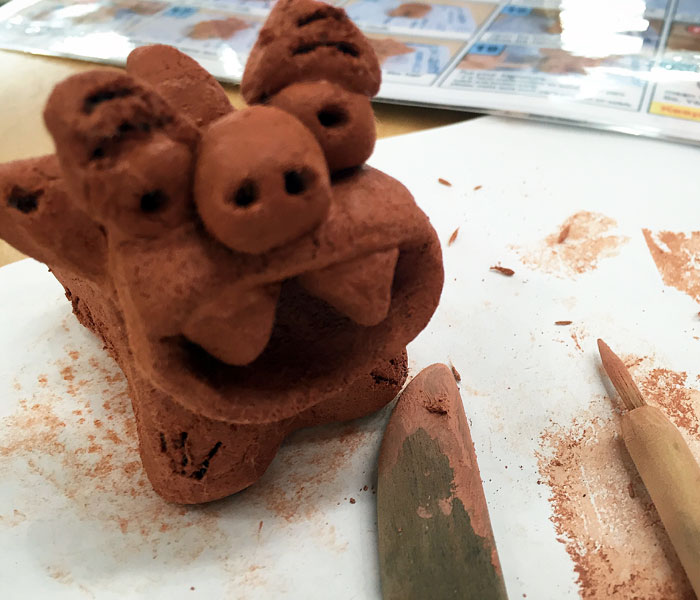 DIY shisa sculpting. It’s a lot harder than it seems.

Little did we know that we’d not only be painting our own miniature shisa, but we’d also sculpt them out of clay ourselves. The process took a lot longer than planned and though my shisa looks like a character out of Angry Birds, I found the lesson enjoyable and therapeutic. 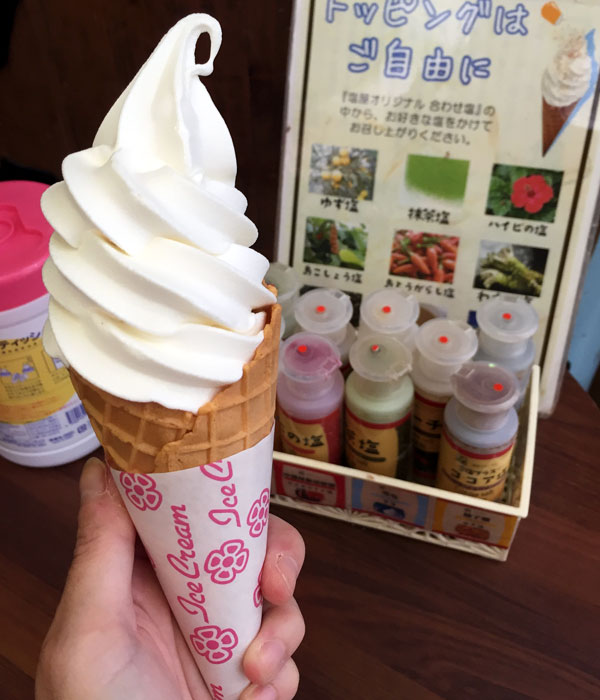 Of all the salts we tried (black sesame, cocoa, hibiscus, matcha and more) I liked the wasabi flavor best. It gives the sweet yukisio soft serve the perfect amount of saltiness and heat. Wasabi salted soft serve…who knew?

After our shisa-sculpting experience, we come across a store that featured salts only sold in Okinawa. Better yet, you could purchase a soft serve ice cream cone and sprinkle different salts on it to try the unique flavors. I love soft serve, so this option was a no-brainer. 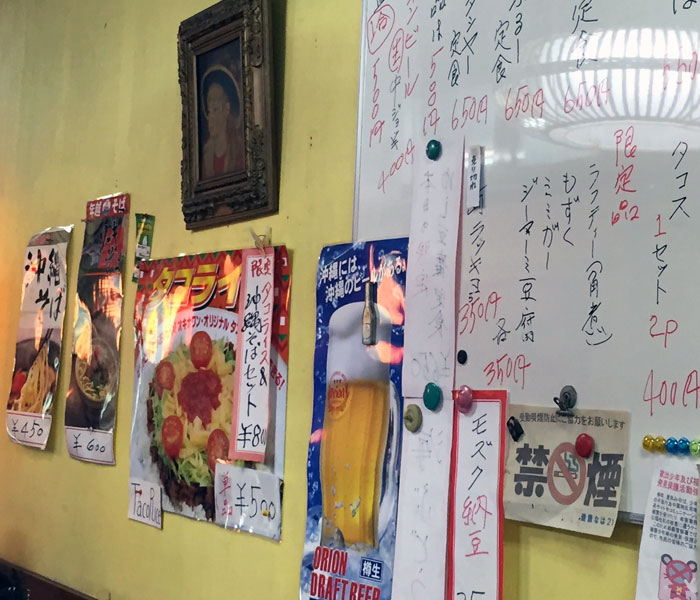 I’m sure the eatery offered more than just taco rice and soba, but those are the only photos we can make out. By default, everyone orders either entrée and my brother gets an Orion (Okinawan) beer.

8:30 p.m. For dinner, we went to the first hole-in-the-wall restaurant we found accessible on the street level so Grandma wouldn’t have to climb more stairs.

I could tell this was a local shop because no menus existed. Much like Ethel’s Grill in Kalihi, descriptions of the available items were taped to the wall and we pointed to the ones we wanted. I inhaled my taco rice entree in under five minutes. Did I mention I was starving?

Unfortunately the soba, called suba by locals, we ordered lacked flavor and needed a generous helping of shoyu, but the taco rice was seriously on point.

10 a.m. We spent the entire day shopping, eating and exploring Kokusai Dori once again. We poked our heads into the Okinawan McDonald’s to see how different it was; travered the biggest Don Quijote on the block; and ate anything that looked remotely interesting. 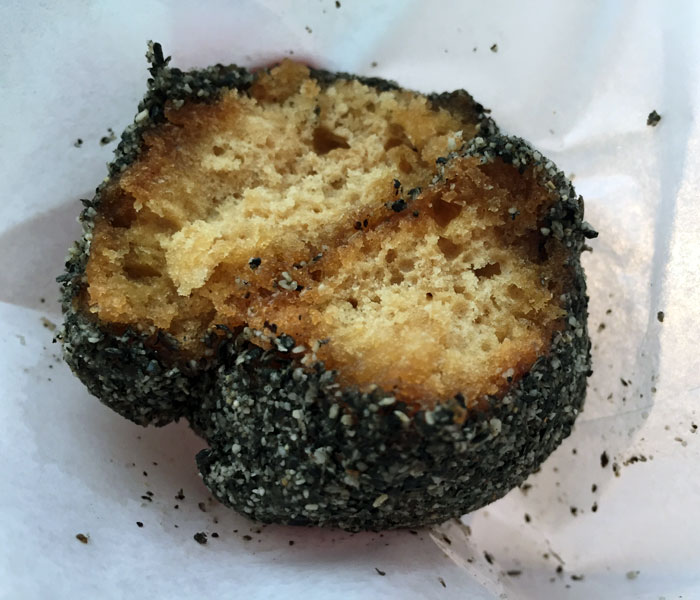 I love the hint of saltiness that isn’t overwhelming in the black sesame andagi.

Food highlight: getting freshly made andagi from a local vendor. Andagi are available in original, black sesame, coconut and brown sugar flavors, with black sesame being the most popular flavor. The andagi is fresh — warm and chewy on the inside, complete with a light, crisp exterior. The rest of my family ordered the original and brown sugar varieties. 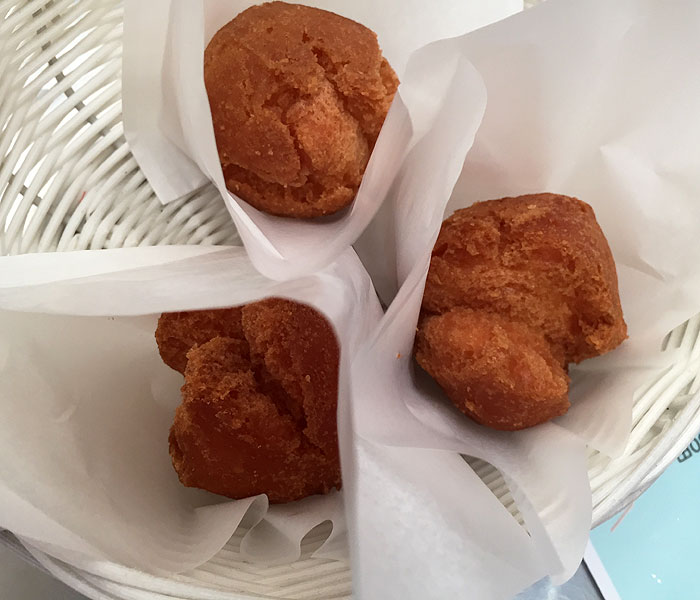 My brother said the brown sugar flavor is true to its name and featured a distinctively sweet taste.

The day before, we saw many signs for Blue Seal Okinawan ice cream. Blue Seal originated in Uruma City in 1948 and is famous for its unique flavors that cannot be found outside of Okinawa such as sugar cane, beni-imo (sweet potato) and shiiquasa (similar to a citrus fruit).

Of course, we stopped by one of the shops and get a variety of flavors, including sugar cane and Okinawan salt cookies. 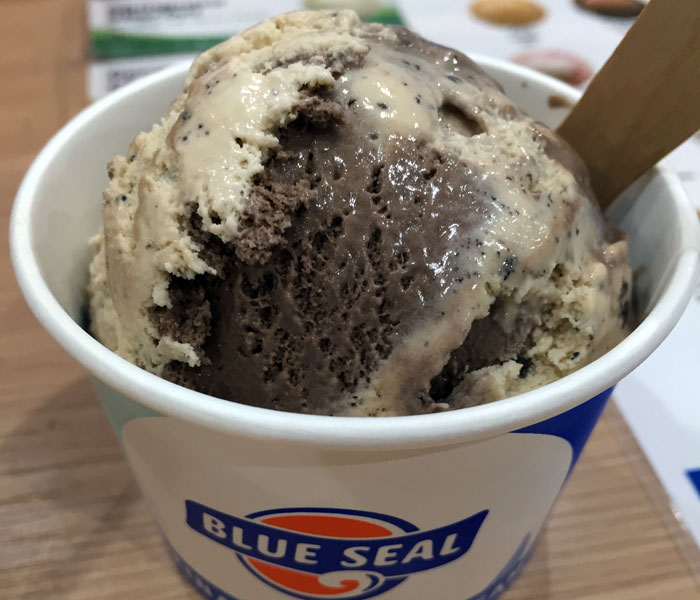 After much contemplation, I settled on the shop’s limited edition chocolate cookies swirl. With flavors like Ryukyu royal milk tea, beni-imo and maccha latte available, it was harder than ever to choose just one flavor.

5 p.m. Departing Naha Airport for Tokyo. I intended to sleep during the two-hour flight but I found myself reflecting on my Okinawan experience instead.

Aside from the unbearable humidity, I thoroughly enjoyed every aspect of my 30 hours in Okinawa. Despite the language barrier, just being there with the locals made me feel a stronger connection to my roots and heritage. Seeing Shurijo Castle made history come alive, and exploring International Street — where locals often shop — truly made me feel like a part of daily Okinawan life. I can’t wait for my next visit back to the sunny island of Okinawa.

Born and raised in Honolulu, Kelli Shiroma moved back to Oahu in 2015 after pursuing her master of arts in journalism at USC and working for a year in San Diego. When it comes to food, Kelli's favorites can be boiled down to three main categories: brunch, cheese (mac & cheese) and desserts. Her interests include working out, traveling and all things Disney. Follow her on Instagram and Facebook: @kellishiromabraiotta.