I didn’t get to get a significant taste of as many hotspots Downtown as I would have liked on this last trip, but hopefully you get an idea of the area’s resurgence. The new restaurants and bars are within walking distance of the main hotels, and cater more to Las Vegas locals … you won’t get the tacky, touristy vibe of The Strip or feel like you’ve never left Hawaii like on Fremont Street. 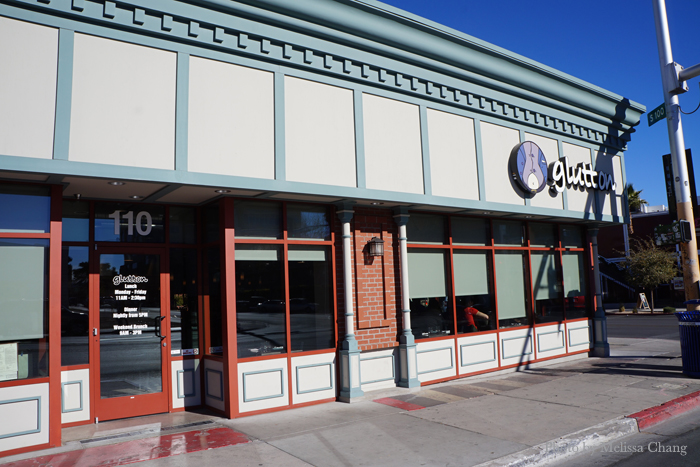 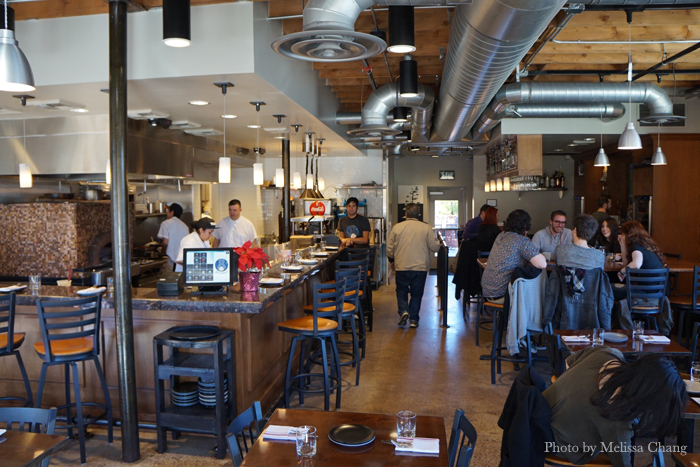 One of the newer restaurants is Glutton, which is a stone’s throw from Carson Kitchen and across the Downtown Container Park. Overall, the menu seems to be pretty simple and straightforward, but with a few modern themes; the creative cocktails seem to be the bigger draw. But on this day, we went to Glutton for brunch, so weren’t ready for as much booze as we’d normally be drinking with a meal. 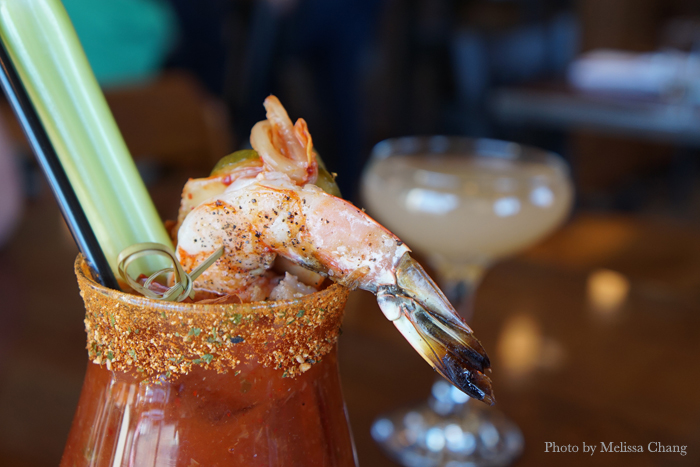 Still, the signature Glutton Mary is like a meal in itself — it’s a kimchi bloody mary made with American Harvest vodka, shrimp, pickled mushrooms, celery and togarashi chili. Definitely lick the glass and drink to get the full effect, as it is spicy, sweet, and savory, with complex layers of flavor and textures (yes, textures) in every sip. 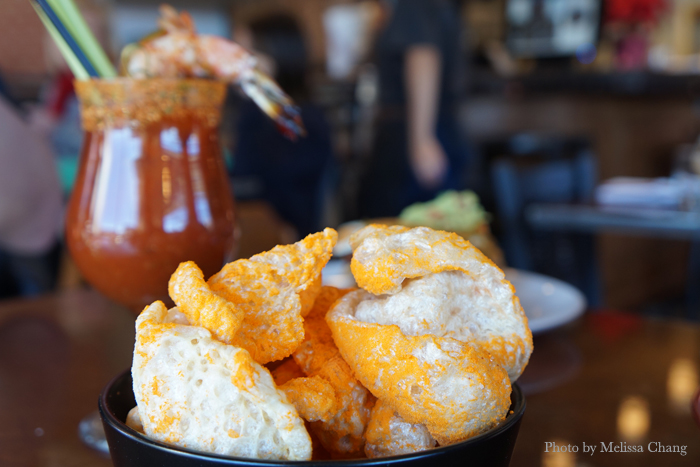 The spicy pork rinds seem to be a staple here, and go really well with the Glutton Mary. They’re actually not super spicy; they’re kind of like a cross between pork rinds and spicy Cheetos. But it works. 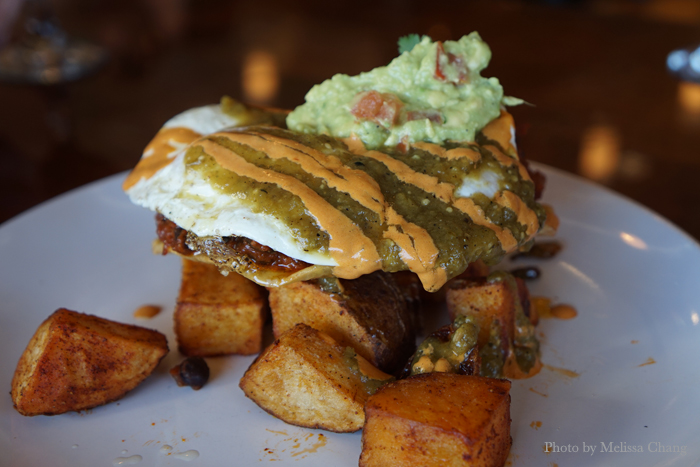 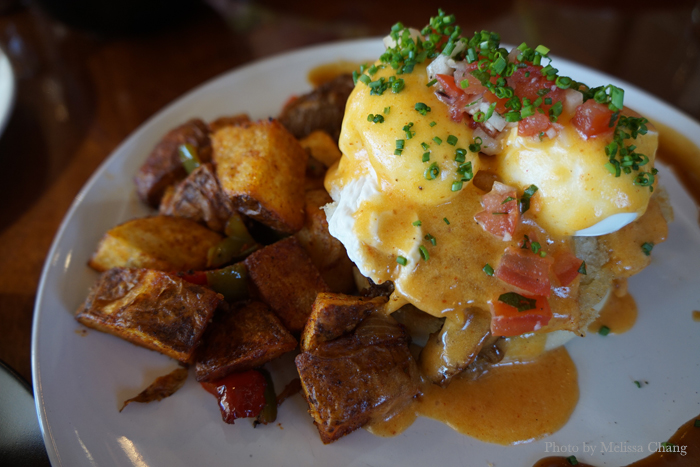 If you can’t decide what to get for brunch, get the Benedict. It’s different from any Benedict we’ve had, with a rich braised pork, poached eggs, English muffin, and chipotle hollandaise. Unlike regular Benedicts, which are just buttery and salty, this has a wider range of flavors, with the slight spiciness that cuts the richness and mellows the saltiness. It’s good, and we definitely recommend that one. 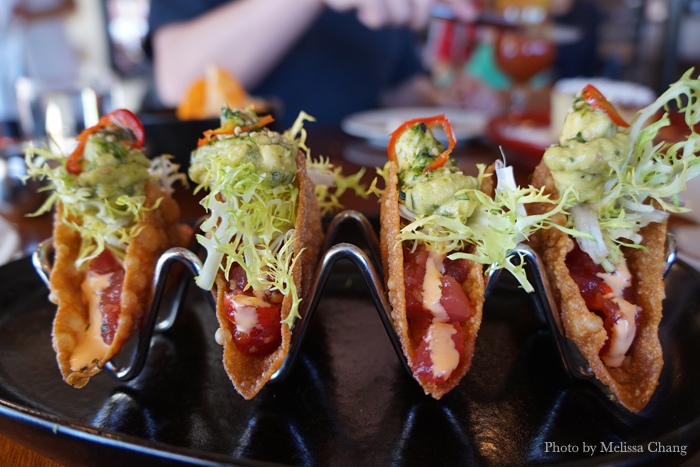 Aside from the redundancy in “ahi tuna,” these tacos are great little snacks. It’s hard for Hawaii people to eat poke outside of our island home, but this is actually pretty good — I’d recommend it to any homesick expats. It’s not mixed with flavors that you’re used to seeing in Hawaii, but it works: sweet chili, yuzu guacamole, frisee, and pickled fresno pepper. Yuzu guacamole? Hit me up again! 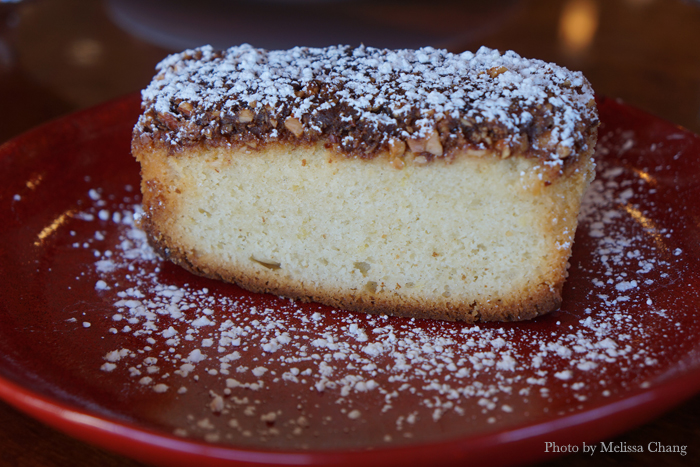 I didn’t know what to expect when I ordered the lemon almond coffee cake, but I’m glad I did. The house made coffee cake is made with almonds, lemon, olive oil and a generous streusel topping. It’s so dense that you should share this, or you’ll be too full to try the other things. Definitely get it, though.

Speaking of something sweet, I had a scoop of gelato on my way out of Vegas at Perfect Scoop. They are rated one of Las Vegas’ best ice cream shops, and they are prolific on social media. Since they don’t just follow, they engage, I had to return the favor and actually show up to try their stuff. Too bad it was just me, or I could have tried more. 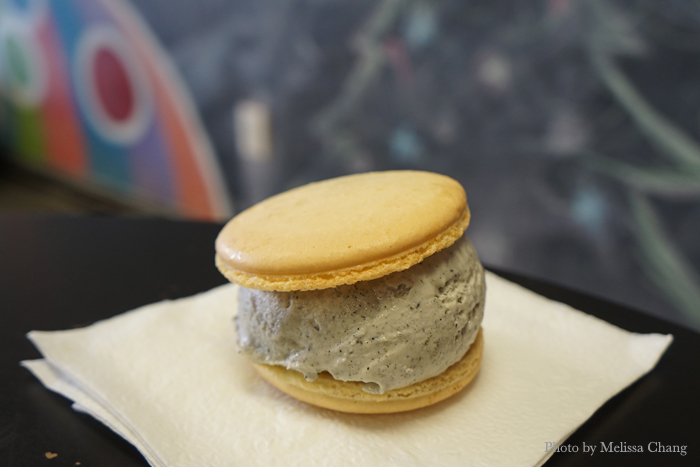 The one thing you might want to get if you can only eat one thing here is their French macaron ice cream sandwich. They have a variety of giant meringue cookies, so choose your macaron flavor and then choose your ice cream. One of their employees recommended the vanilla macaron with black sesame ice cream, and that was a nice combo. I don’t see how you could go wrong with any of the flavors, though. Just be aware, these sandwiches are huge, and no one can finish it by themselves. So unfortunately, half of this had to go to waste. Follow them at @PerfectScoopLV and tell them I sent you.

And that was it for this trip! To see all the photos, click here.