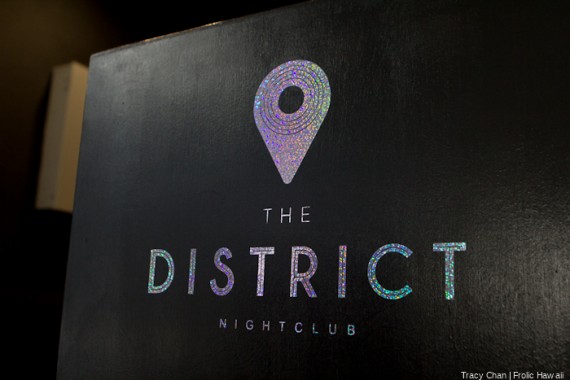 Bar Seven, formerly Venus Lounge, the large nightclub space below The Republik, has gotten a makeover and is poised to be a major new player in Honolulu’s nightlife scene. Enter The District.

The logo is an obvious nod to social media and GPS mapping apps. “You have arrived at your destination,” it announces. 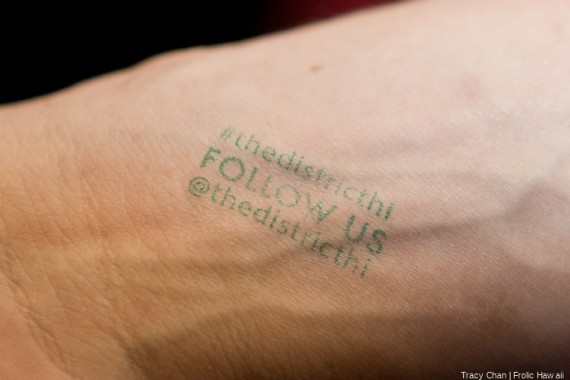 This emphasis on social media and mobile technology is also evident in the club’s stamp, which includes the hashtag, #TheDistrictHI and their social media handle. It’s a revealing commentary on how nightlife culture has changed, and how integral our smartphones have become when it comes to going out and having fun. 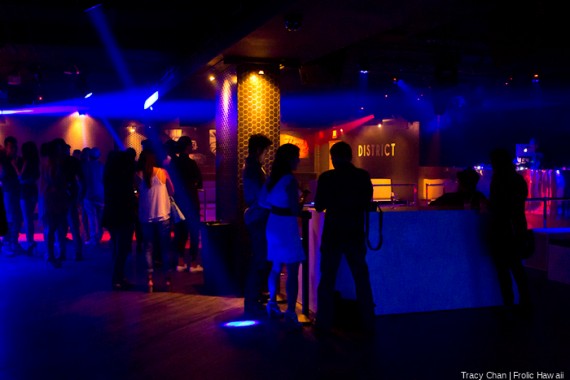 The former Bar Seven has been cleaned up, remodeled and brought back under the management of one experienced group. Gone are the midnight drag shows and the stand-up comedy nights; in its place is a new, 23+ upscale nightclub venue with three bars, 15 bottle service tables and an impressive sound and lighting display. 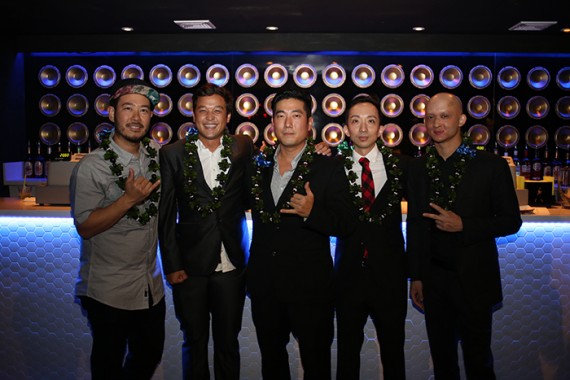 Meet the team behind The District — Element Group — one of Honolulu’s leading nightlife promotion teams. These are the guys responsible for Ginza, and former nightlife hot spots Tsunami’s, Vice and Ka Restaurant and Lounge. All of them are still under 40, and they’ve proven themselves by gaining a following that has accompanied them to numerous venues, even the unexpected ones. One of the partners said it took about 10 guys two months to renovate the club and get it looking the way it is. Now that’s teamwork! 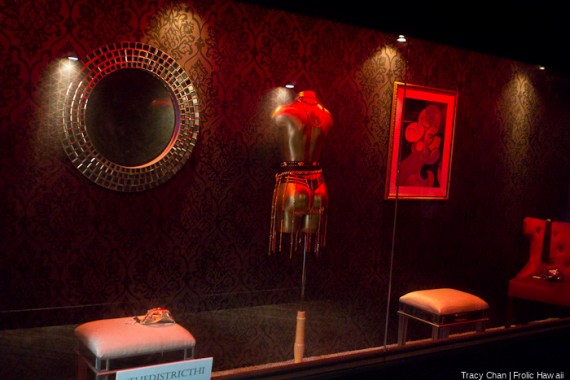 Walk into the club and the first thing you’ll encounter is a “peepshow” nook, reminiscent of a museum display. Later, there will be live models posing or doing risque displays. 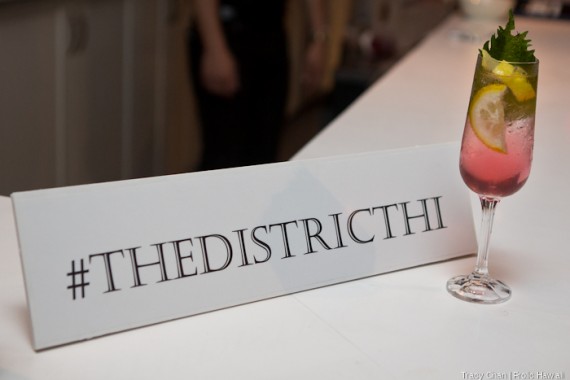 The drinks start at $8 for a cocktail, $6 for a beer. Four signature cocktails were available at Thursday’s preview event. This is my favorite of the four sample offerings, the Shiso Cooler, made with Choya Umeshu, Japanese Ume liquor, Iichiko Blu barley spirits with yuzu, Yukari Shiso, syrup and lemon juice. Tasty and sweet, but not too sweet, this one best appealed to my palate. 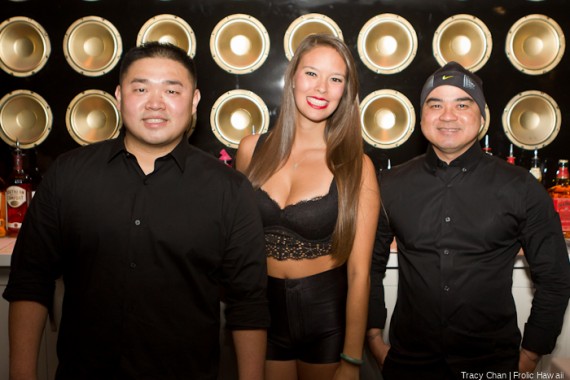 Meet some of the bar staff. 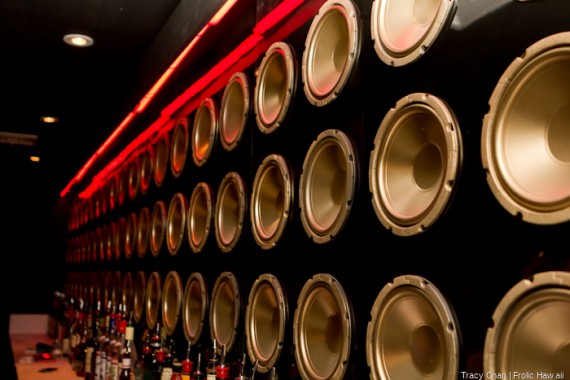 This cool display of real speakers behind the second bar (there are three bars inside the venue) isn’t hooked up, but it’s a neat new concept that fits in with some of the retro decor. 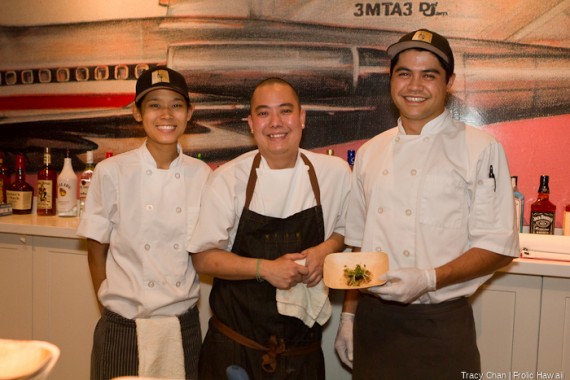 MW Restaurant staff were on hand to provide food for the preview. Normally, this would be a fully functional third bar, but for special occasions, it can also double as a food sampling station. Whether The District also plans to target foodies and the pau hana crowd like Vice did remains to be seen. 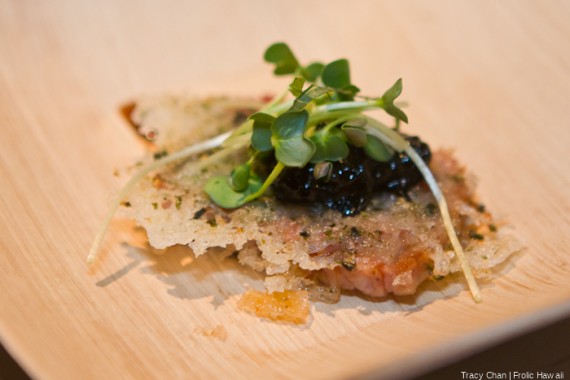 MW’s candied Spam, probably the most popular of the three food samples. 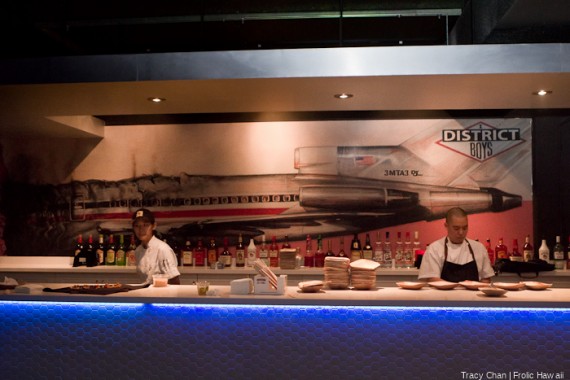 Here’s a wider look at the bar. An interesting thing to note are the retro touches that contrast, sometimes confusingly, with the ultra-modern ambient lighting. Frequent clubgoers will probably compare the clean white of the interior furniture to M Nightclub, while some of the more vintage photos and art could be compared to Republik upstairs. As far as atmosphere goes, though, The District meets in the middle, between ultra classy and not too classy to be uncomfortable. 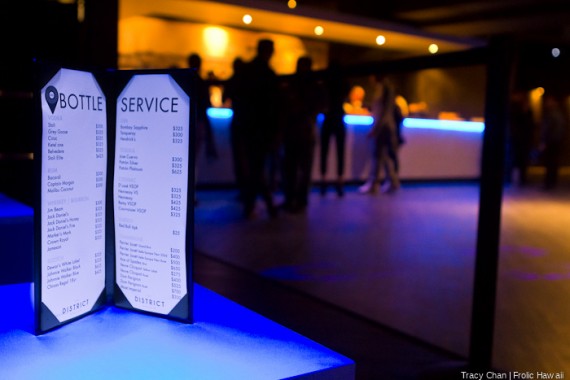 Bottle service prices are on the higher side, however. With Grey Goose, Jack Daniels and Jameson going for $325 a bottle and more unusual offerings like Patron Silver going for $625, most people might save the bottle service for a special occasion. 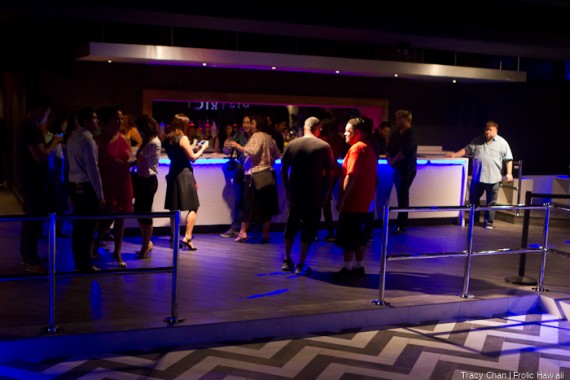 A view of the bar closest to the sunken dance floor. 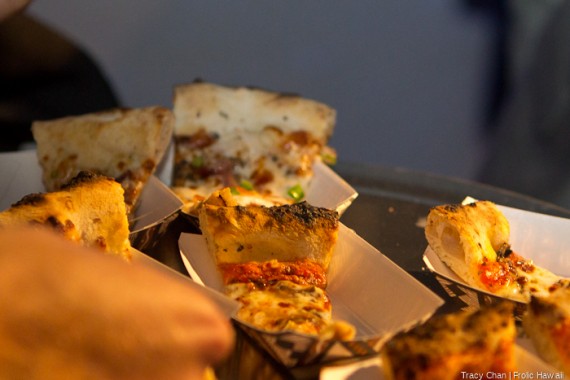 Pizza from the lounge next door. Sadly, it is no longer V Lounge, but there’s still good pizza just around the corner from the club, a plus for any hungry clubgoer. 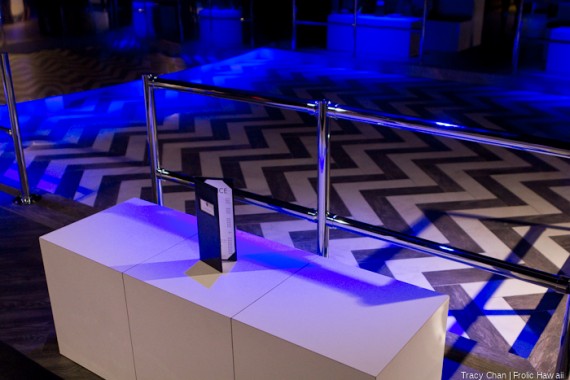 One of the coolest things about this new club, in my opinion, is that every seating area looks like a VIP section. There is, of course, an actual VIP section in back next to the DJ booth, and another small VIP corner by the main bar, but the fact that all seating is sectioned off and overlooking the dance floor is nice. Limited seating also makes it clear that this isn’t a place to lounge around; instead, you should be mingling or dancing. 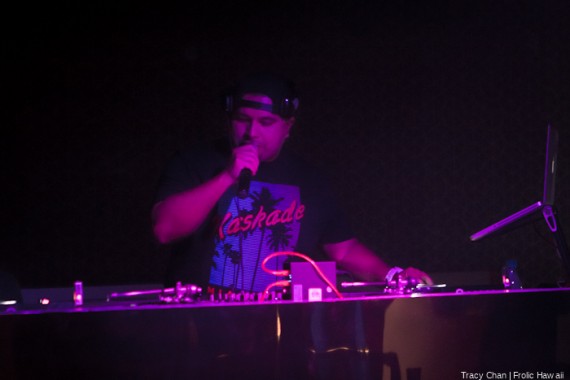 DJ Alex Dreamz from Las Vegas (you may remember him from the grand opening of Vice Nightclub) and his partner Drum Lord will host Friday’s soft opening. Together, the pair goes by the name, Club Killers, and you can be sure they’ll break the dance floor in right.

The District’s state-of-the-art sound and lighting system makes the club feel smaller than it actually is. Also on the floor: Co2 Cryo Cannons that give off an impressive amount of smoke. 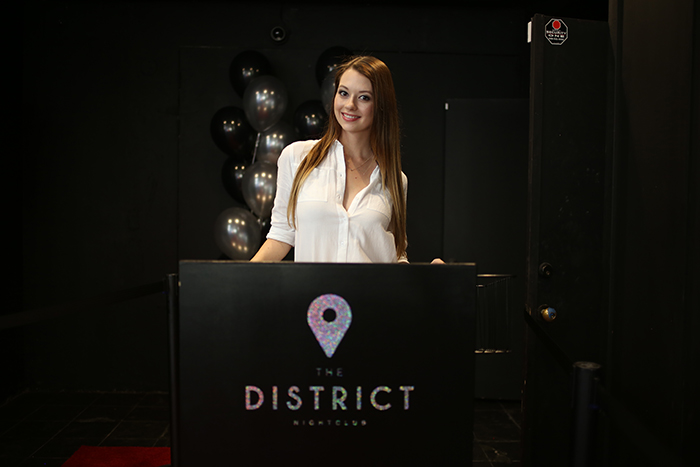