I exercise to eat. That’s why I decided to reward myself with a trip to 9Bar HNL for breakfast after my morning run. I don’t really run that far. Or for that long. Anyways, I woke up my partner in crime and we drove down for some grub and morning libations. 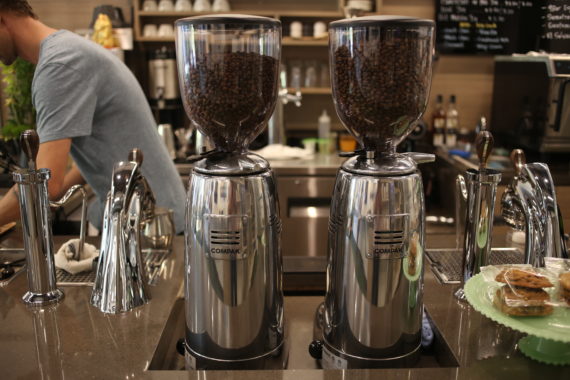 One is the loneliest number that you’ll ever do.

9Bar HNL is the latest coffee shop to open its doors at SALT at Our Kakaako. Located on the first floor, we found the cafe right after stepping out of the parking garage elevators. We walked in around 9 a.m. and found it surprisingly busy for being new. Mainly with young mothers and their infants. It was probably giving my better half some ideas. 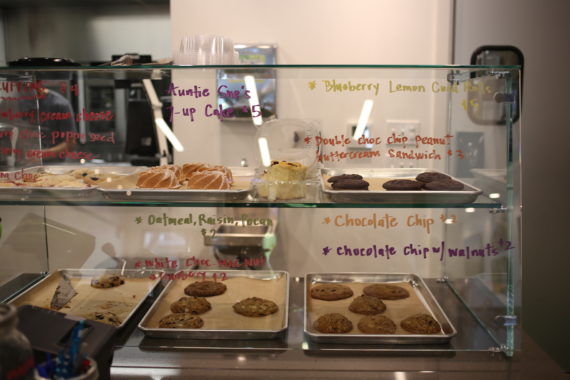 They’re waiting for a good home.

The menu selection had the standard array of caffeinated beverages, with a smattering of breakfast fare and baked goods. Although the selection of edibles is limited, you can order breakfast all day which is 7 a.m. – 4 p.m. on weekdays and 8 a.m. – 2 p.m. on weekends.

Being from the mainland, I opted for the Cali Bowl ($9.50), paired with sparking pineapple juice ($2.50). My girlfriend went for the Aloha Bowl ($9.50) and a cappuccino latte ($3.75)—definitely the breakfast of champions. The latte comes on a neat little tray, paired with sparkling water in a shot glass. 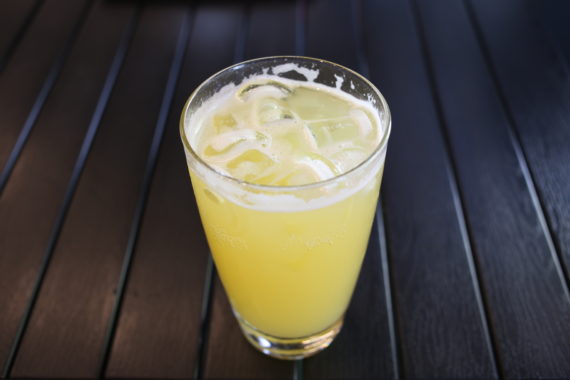 Sparkling Pineapple. It’s like there’s a party in there and everyone’s invited.

When I read ‘sparkling’ pineapple, I thought it was a fancy way of just saying delicious or sweet, but what it really means is that carbonated water is added to the pineapple juice. Not really my thing, but some of you may like it. Later, we tried the sparkling POG ($2.50), which I liked a little more. I could taste less of the carbonation, probably because the lip of the glass is crusted with li hing mui powder. The sourness took my mind off the carbonation. Good thing they had complimentary water on the side. 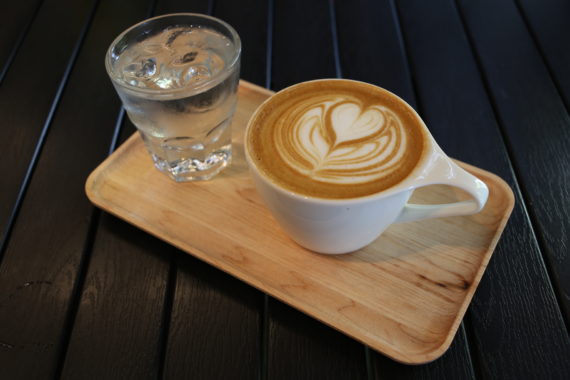 The babes enjoyed her cappuccino latte. She remarked on the nice latte art, then described the flavor as being stronger and more pronounced than other lattes she’s had. After taking a sip, I’d describe it as a concentrated taste that immediately lets you know that you’re about to get a caffeine rush. 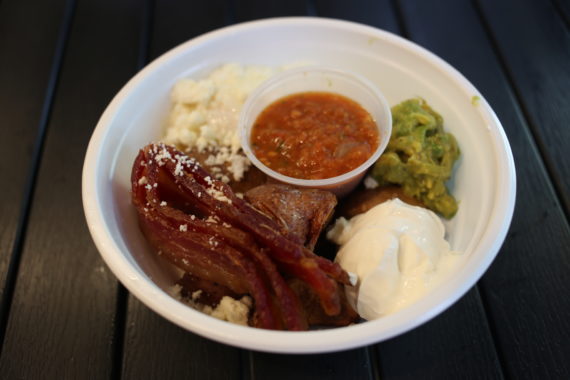 Cali Bowl. And if you want these kind of dreams, it’s Californication.

My Cali Bowl was filled with goodness. Not sure how to tackle it, I first went for the roasted potatoes. The potatoes were a bit bland, but that changed after dabbing them with the sour cream and guacamole. The guacamole is seasoned well and the mixture of the two made for a nice combo of tang and zest. The bacon was thick and tasty, but a little chewy. The egg yolk, when broken, runs over everything. Not a bad thing, but I prefer my yolk firmer. I would have liked the Cali Bowl a little more if it was warmer though. 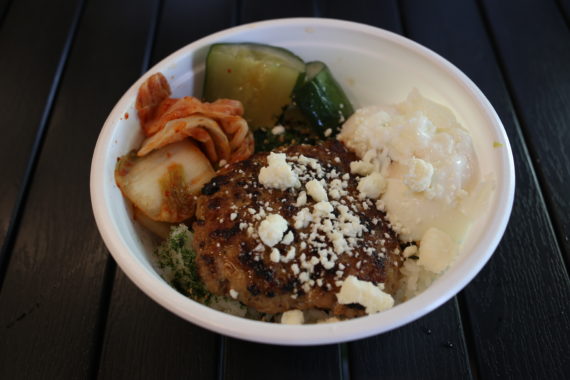 Her Aloha Bowl looked like it was filled with aloha. A slab of homemade sausage rested atop rice, kim chee and a poached egg thrown in for stepping up that breakfast game. The sausage was packed with flavor and a bit salty. It was delicious though, with a pleasantly mild aftertaste. I noticed that her poached egg was done they way I liked: a soft, yet firm yolk. She remarked at how the nori in the rice was a nice touch, with the kim chee having a gentle flavor. In her words, the Aloha Bowl was basically a higher-end loco moco. I would have to agree, as I ate what she couldn’t finish. It’s my God-given duty. 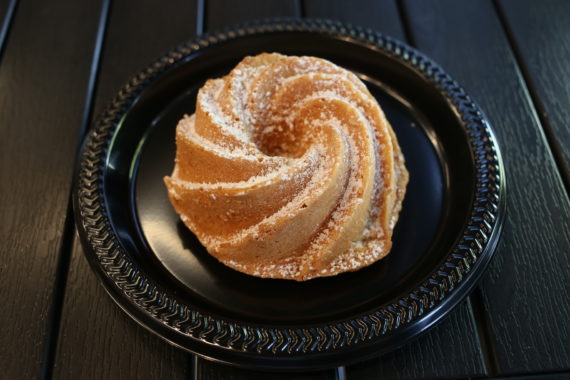 7UP Cake. Because make 7UP yours.

I was full. But you don’t need to be hungry to eat dessert. I went back to the cashier and ordered a 7UP Cake ($5.00). I liked the shape. It’s a 7UP cake because it’s made with 7UP soda. (I had to Google that.) While I sat in contemplative silence, digesting one-and-a-half bowls of food, the server arrived with our cake and two forks. I enthusiastically began to wreck that cake.

The crust is firm, with a slight crispy flakiness to it. It tastes great, but doesn’t lend itself to being cut with the side of a fork. The yellow cake within the interior was sweet, fluffy, with a hint of lemon and lime. A very light pastry, that I felt would be good to share with others. She said it’s better to not share and just spend the whole afternoon eating it by yourself. When you’re right, you’re right. 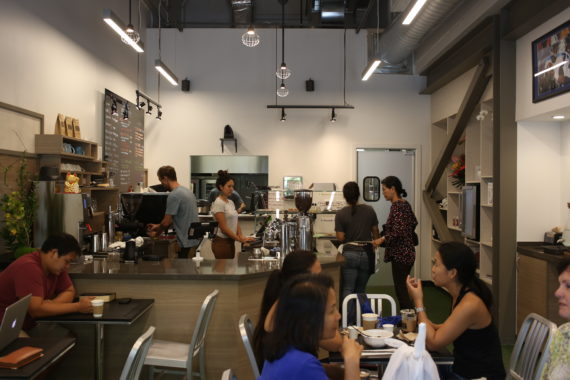 As I waited for that feeling of guilt to wash over me, which usually happens after I eat a filling meal, I take notice of the customers shuffling in and out. It’s quite busy. Which is understandable, from the quality of their fare. My keeper remarks that she could see herself going back for afternoon tea, coffee and a pastry. I feel like it’s a spot to go for when I want a light breakfast. If I wanted something heavier, I would bring her so that I could eat her leftovers.

And if you’re wondering why it’s called 9Bar HNL? You’ll just have to go down yourself and ask.