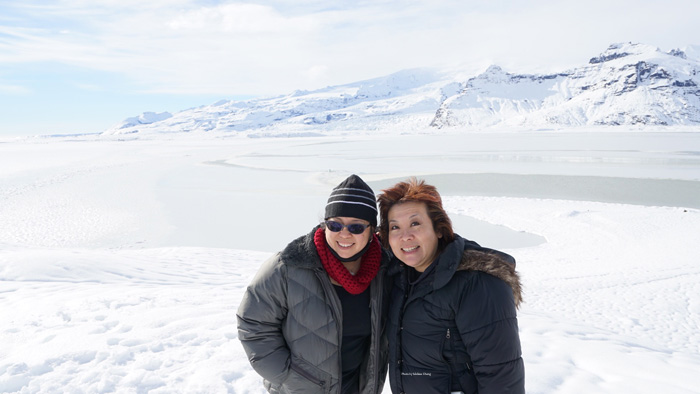 As many of you know, Iceland is a (figuratively) hot destination for travel right now. Blogger Deb Aoki and I became two of the 2 million visitors to the Nordic island recently, and that was quite the adventure!

I’m going to start my adventure at the end, though, just to get it out of the way: We all know that America has a lot of crime, everywhere. Upon landing back in Oakland, someone broke into Deb’s car and took our suitcases, plus her backpack, plus my camera with all my photos. I had not downloaded all my photos to my phone yet, so there’s a lot that I wanted to show you, that I won’t be able to share. Thankfully, both of us had been forced to leave our laptops at home. 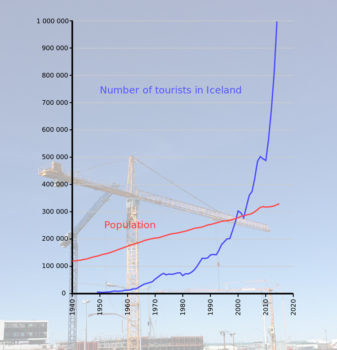 The Reykjavik skyline looks like Kakaako, as Iceland rushes to build enough hotels to meet tourism growth. Chart by Borvan53, number of tourists from the Icelandic Tourist board data, population from Statistics Iceland – Own work, CC BY-SA 4.0, https://commons.wikimedia.org/w/index.php?curid=37883927

That being said, despite the crazy rise in tourism over the last 10 years, Iceland is the safest place on earth, a fact their residents love to brag about. How crazy is it? In 2008, Iceland experienced a huge financial crisis when the country’s major banks failed and were taken over by the government. Fortunately, someone at the tourism board must have been a genius, because around the year 2000, the number of tourists to Iceland exceeded the country’s population and it’s been on the rise ever since.

Case in point: There are tons of tour operators there. We did one excursion with Arctic Adventures, and they reported that in January 2016, they had only 400 customers for the entire month. In January 2017, they had 4,000 customers. And they believe the same is true for all other Icelandic tour companies.

We visited Iceland — like many people you’ve probably seen in your instagram feed over the last year — because we found a good airline  deal. Wow Airlines has outrageously cheap sales from North America, and Iceland Air offers a free stop there if you’re going to or from Europe. As you’ll see in the coming blogs, it’s cheap to GET there, but expensive to BE there.

The first thing we did was visit the iconic Blue Lagoon, one of the most visited attractions in Iceland. In 1976, a pool formed at the site from the newly-built geothermal power plant’s wastewater. In 1981, people started bathing in it after reports of alleged healing powers from skin ailments. In 1992, the official Blue Lagoon bathing facility was opened.

This is something you do upon arrival or before departing, because it’s closer to the airport than to Reykjavik. We arrived at 4 a.m., shopped at Duty Free, collected our baggage and got our car and Trawire wifi. The weather changes every 10 minutes there, thanks to their microclimates, so we drove through rain, sleet and snow. 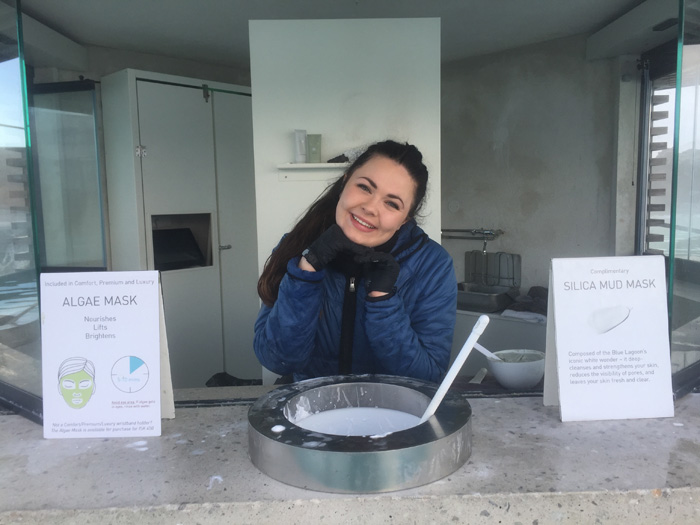 You can get a silica mud mask, followed by an algae mask, from Hjördís Hjörleifsdóttir. Tell her Melissa808 sent you!

TIP: This is an expensive tourist facility, and there is a cheaper local option somewhere down the street. However, I believe the Blue Lagoon spa provides towels and has all the other trappings (like a bar and mud mask booth). If you have enough room in your luggage, maybe you can pack a towel and whatever else you need so you can do the cheaper spa.

Here’s where we knew we weren’t in Oakland anymore. Upon arrival, we asked the front desk if we should check our suitcases in.

Blank look. “Why do you need to check in your suitcases?”

“They’re in the trunk of our car. Someone might break in and steal them!”

Blank look. “Ummmmm, you locked your car doors, right? Well, then, they should be safe. This is the safest place in the world! We aren’t America.” 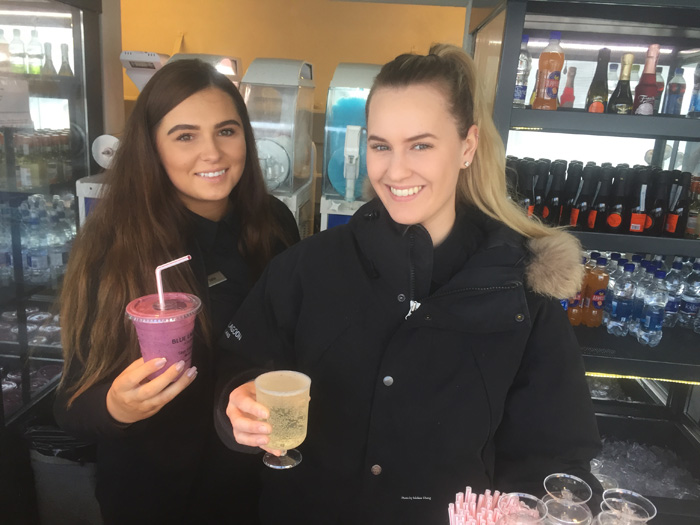 The lagoon bar features alcoholic as well as non-alcoholic drinks.

A soak in the Blue Lagoon is a great way to start the trip, as it feels great after that long plane ride.

TIP: If you go to the Blue Lagoon, tickets must be purchased ahead of time. Get the first appointment of the day because the facility is less crowded. It’s more expensive, but you may want to spring for the Premium Package in the winter because it includes a robe, and damn … it sure is cold. You can soak for as long as you want, but you won’t want to stay when the hordes of tourists start pouring in.

TIP: Bring all your toiletries & hair care in, because unlike Japanese onsen, the Iceland spas don’t provide any personal care items.

That was our introduction to Iceland, and hopefully a good introduction for you, too! Up next: Our Buuubble experience! To see more from our trip, check out the #AlohaIceland hashtag on Instagram.