“I left my harp in Sam Clam’s Disco.” — Jodie Laltoo

Since I hadn’t been on the East Coast for more than 20 years, I had to make a side trip up to Maine to visit a long-lost sorority sister. Jodie Laltoo was originally from Maine, but through a very long string of convoluted events, she ended up in Hawaii and graduated from Kahuku High School. Many people thought that her last name was Tongan, but she’s actually half Indian (“Ghandi Indian,” as she defines it) and half English.

We pledged together at the University of Hawaii, and she was the first person I’d ever met who was so friendly, wild, outrageous and transparent — I thought it was an East Coast thing — and although she was usually very spontaneous, she loved standing traditions. She was broke, but always generous with what she had, and crazy smart but often cut class. So she would get things done (she graduated early, in fact) but was also a huge partier, so sometimes things … didn’t get done. Now that I think about it, though, she never threw anyone under the bus, just owned any shortcomings, loudly and proudly.

My parents thought she was hilarious. They tried to introduce her to local foods, but I don’t think she liked a lot of it. One day, she tried to make musubis on her own (and remember, this was before there was the luxury of the internet) with Uncle Ben’s long grain rice, while using butter to hold them together into balls. Needless to say, they weren’t very popular. I can still hear my parents cracking up as she told them. 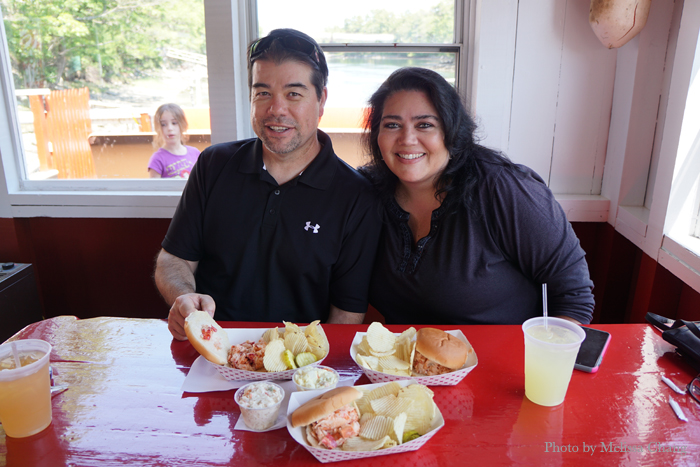 I didn’t realize it until I started planning this trip that one of the last times I actually saw Jodie was at a Sigma Lambda party, making out with this guy that she just met, James Nielsen. I didn’t know it til now, but that night when they kissed, they freakishly knew they had met their soul mate. They immediately cocooned, graduated, then moved to Maine — then got married and had two kids.

They’ve been together 30 years, which is the same amount of time that’s passed since I had last seen her. Thirty years?! Are we really old enough to say shit like that? How upsetting.

I’m going to show you my trip photos a little out of order, just to get things in context.

When James moved to Maine, he did it sight unseen. All he knew was that he wanted to be with Jodie. Now, James is half Korean, and I always considered him white, but when he got there, he was blown away at how homogenous the culture is. In fact, he and Jodie are the most exotic people there! 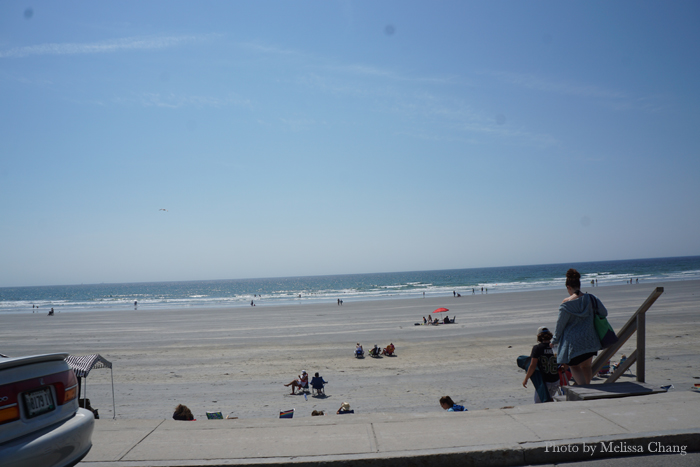 Then she took him to the beach near where she grew up. “That’s not a beach, that’s a mud flat!” he exclaimed. 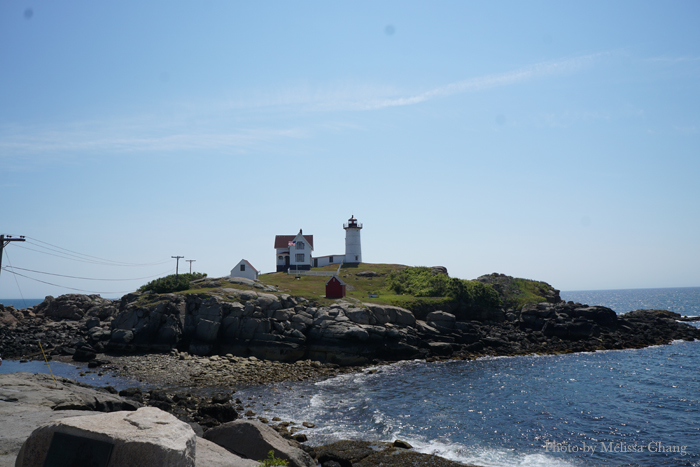 York is beautiful, though — it’s postcard perfect. One of the main attractions is the historic Cape Neddick Lighthouse, also known as The Nubble. Built in 1879, it’s such a classic example of a lighthouse that the Voyager spacecraft, which carries photographs of Earth’s most prominent man-made structures and natural features, includes a photo of The Nubble with images of the Great Wall of China and the Taj Mahal. (This is in case the Voyager falls into the hands of intelligent extraterrestrials, so they know how we build things.) 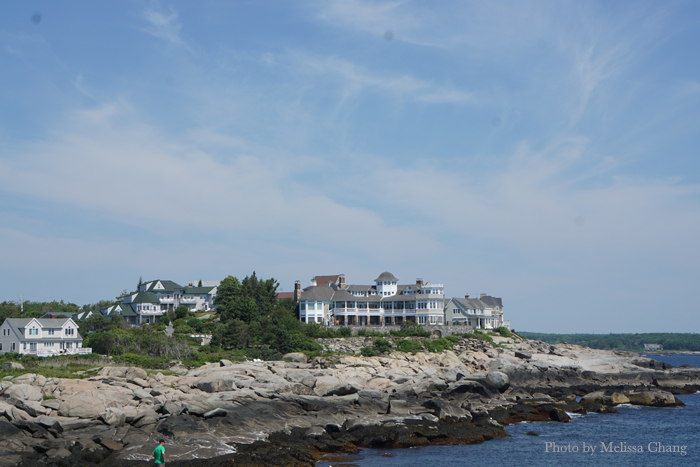 On the other side, you can see some mansions on the land’s end. Jodie actually told me some other interesting stories about the buildings, too long for the blog. But I am intrigued with the green-roofed mansion! 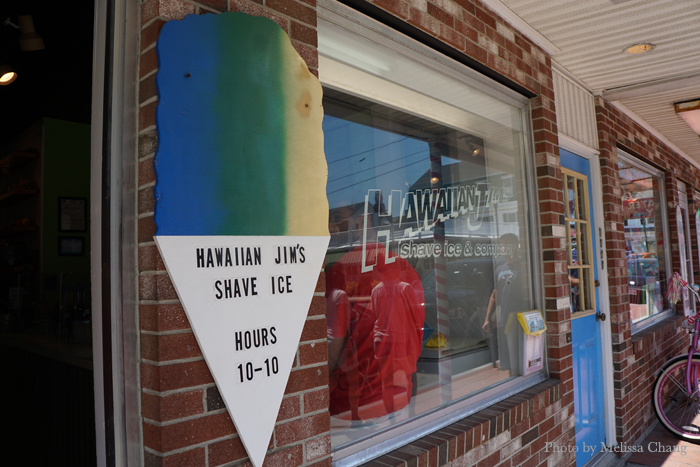 When Jodie and James first got to Maine, they opened a shave ice stand. James had worked at a shave ice store while attending Moanalua High School, so he knew the ins and outs and how to properly make a cone. Remember, out here, James is exotic, so the locals call him “Hawaiian Jim.” That seemed like the perfect name for a shave ice shop. 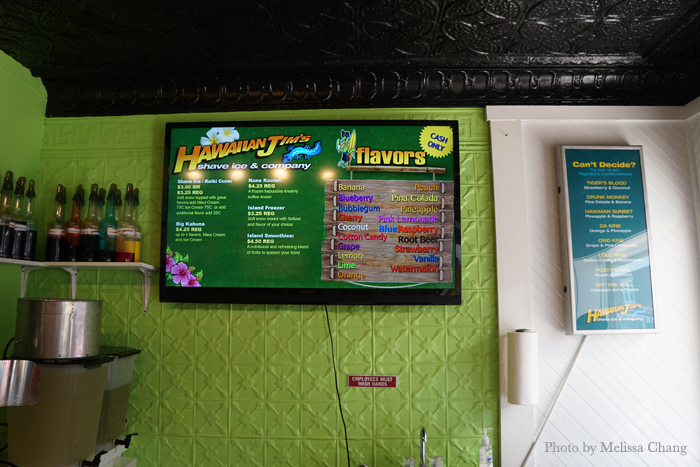 They’ve since sold the business, but the new owners have trained their employees well! Here’s how our guy made my classic strawberry shave ice that day: 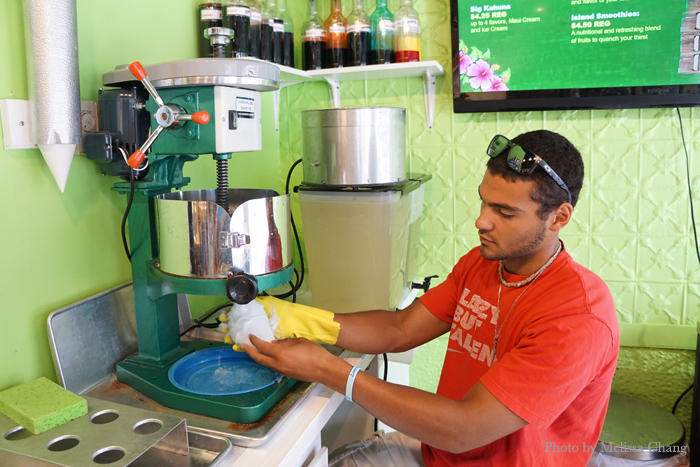 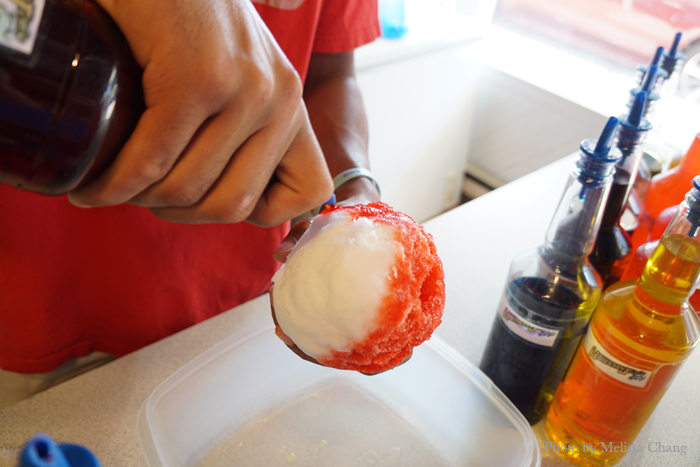 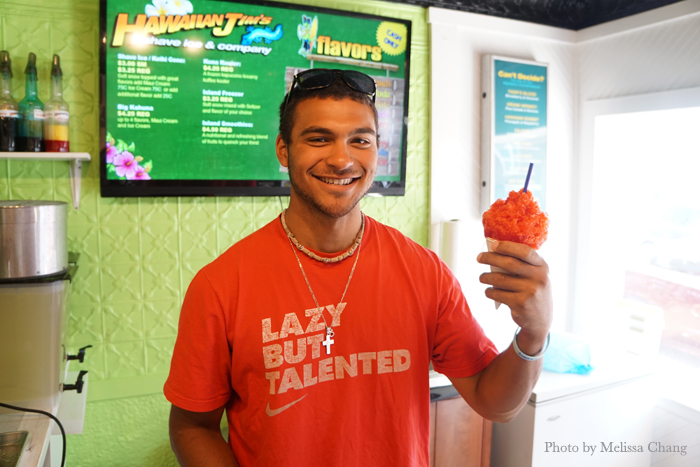 They have to get their syrup from Pennsylvania, so it doesn’t quite taste like the shave ice spots at home. It tastes more like … bon dance shave ice. But it’s correctly fluffy! 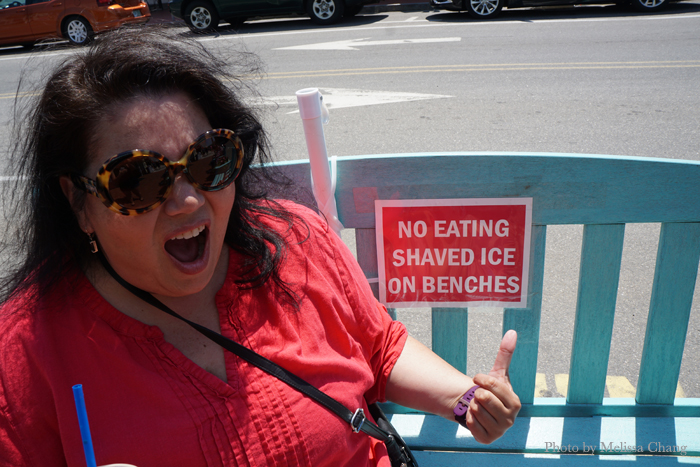 …but be careful where you eat it. “Shaved” ice. LOLz. 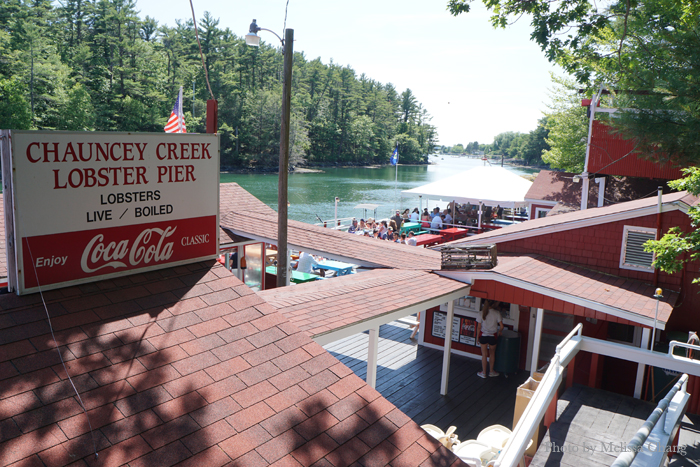 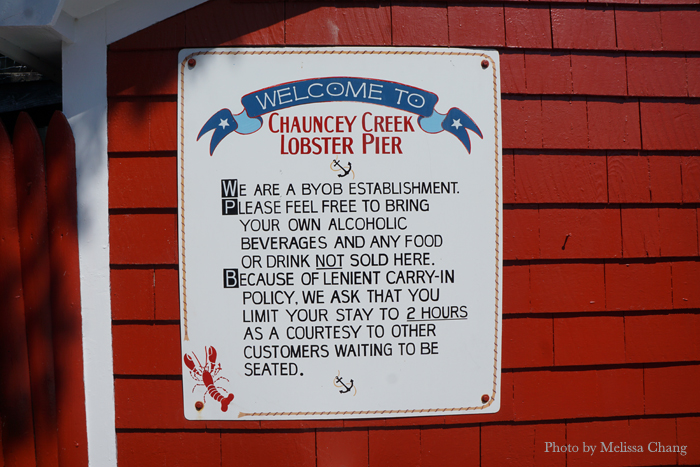 If you’re in the Kittery area, as we were, you should get a bottle of wine from 7-Eleven (there’s only one, and it randomly follows me on Instagram) and head over to Chauncey Creek Lobster Pier. Since this is a very popular gathering place for locals, the parking is a bit of a problem, so be prepared to find street parking farther down the road and walk. 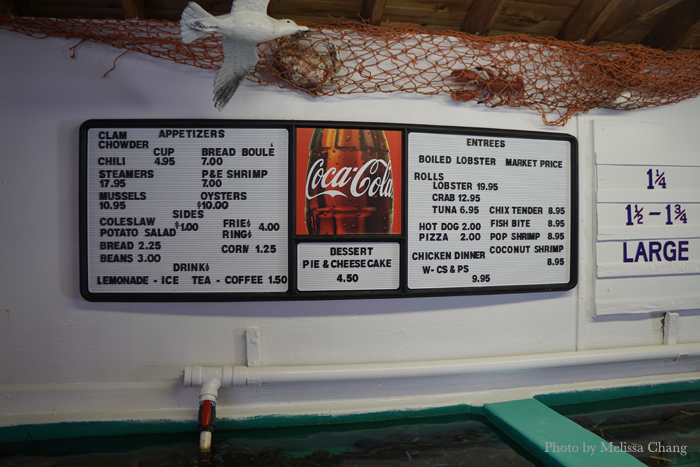 As you noticed in the sign, you can not only bring your own booze, you can bring in any food not sold there. They used to only sell lobster, but have expanded their menu to the sides, as well. But this is still a pretty awesome deal. 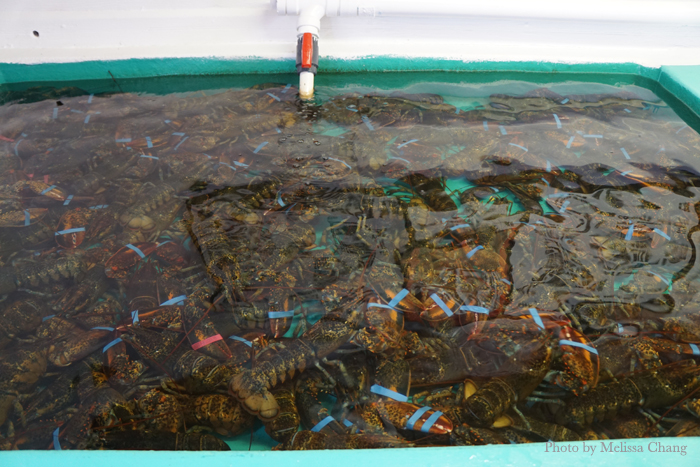 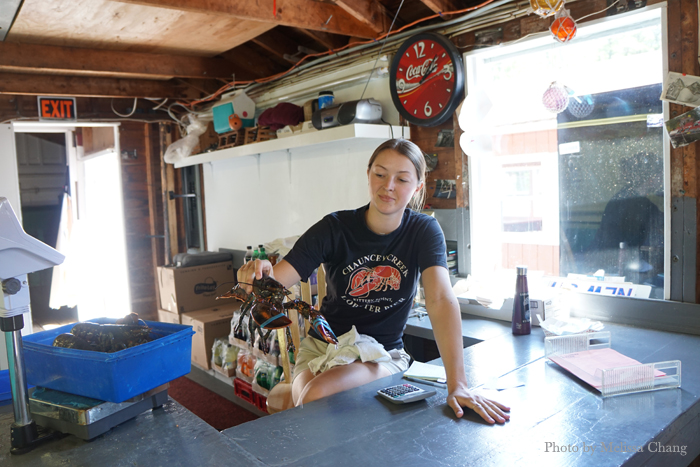 If you want a whole lobster, they’ll help you pick it from the tank and cook it for you. So fresh! 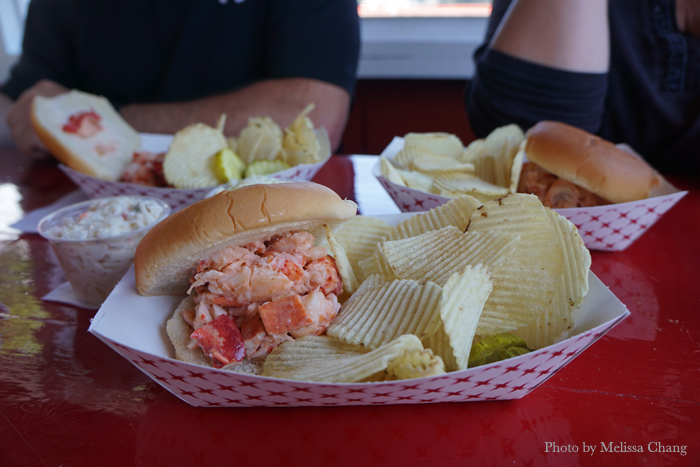 It’s plentiful here, but not necessarily cheap. A lobster roll is $19.95 and it comes with a side of chips and pickles. But you can’t beat the ambience — if you look down, you can see the river flowing below. 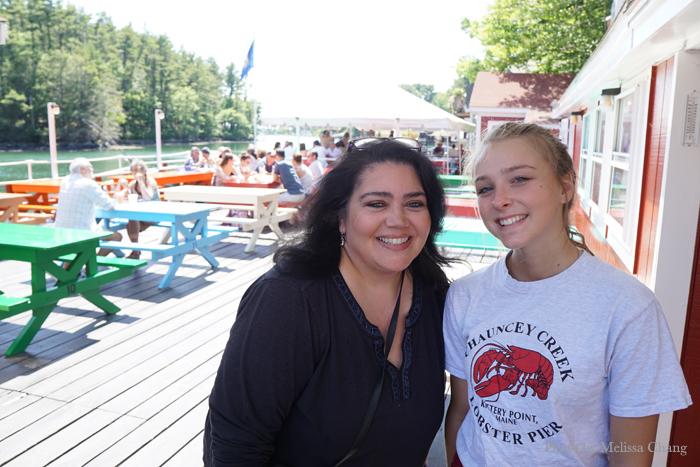 On our way out, Jodie ran into her neighbor! It’s nice to see kids all grown up and working! 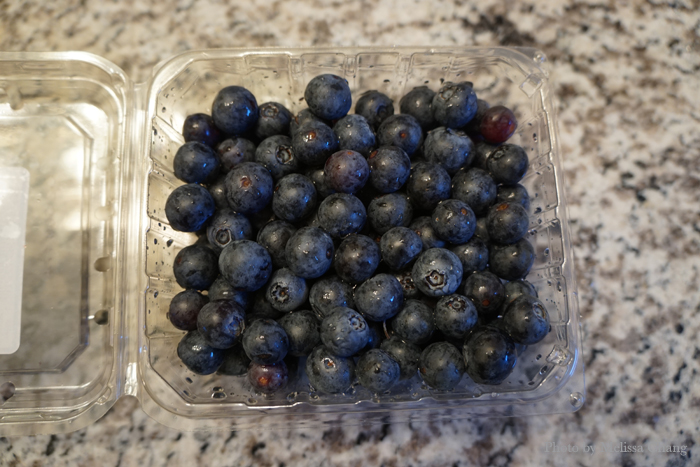 Break before dinner: Jodie sent me to my hotel room with a basket of Maine blueberries, one of the things they’re known for. Why can’t we get stuff this great in Hawaii?

I figured that since Jodie is half Indian, finding the best food of her culture might be a neat thing to do. So we headed to their favorite Indian restaurant, Tulsi. 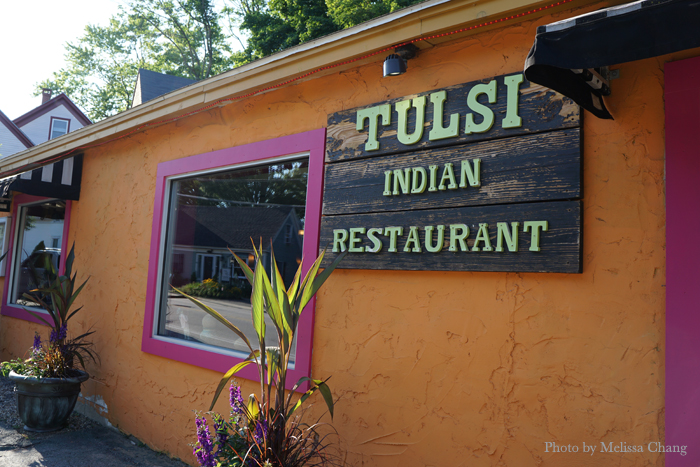 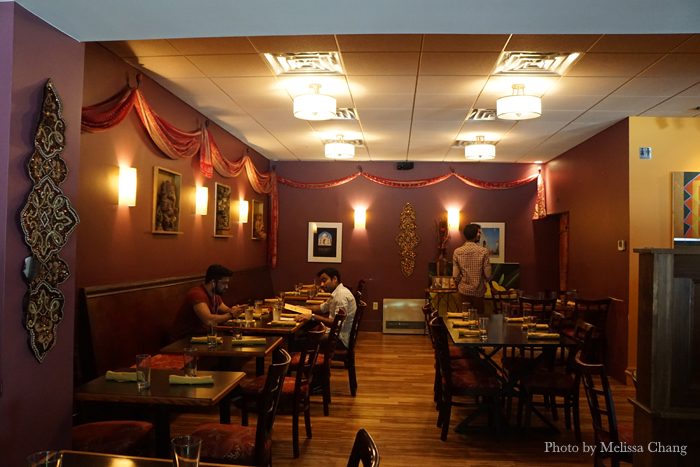 I don’t think they know there’s a congresswoman with the same name. 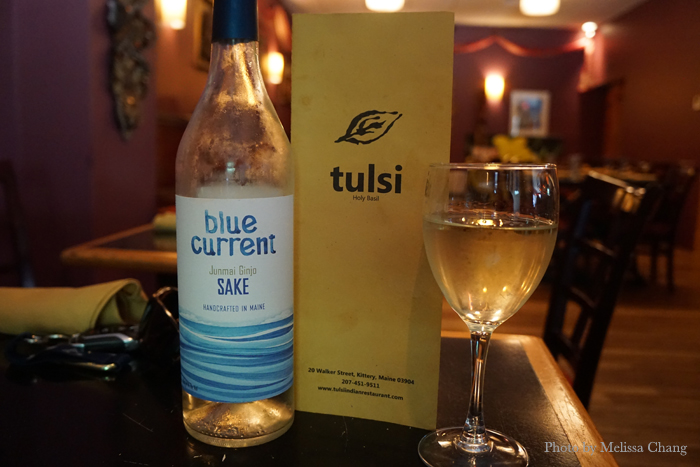 Did you know they have a sake brewery in Maine? Blue Current’s rice is grown in California, milled in Minnesota, then brewed in Kittery. Now that I’ve had a lot of sake, I can say that it’s definitely American, with a coarser, bolder flavor than its Japanese counterparts. I don’t think sake beginners will like it, but experienced drinkers may appreciate it. ($11.50 per glass) 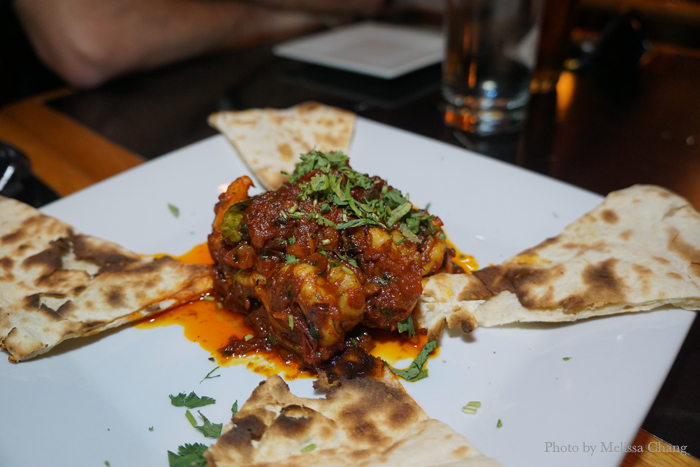 Shrimp Balchow ($10) — sautéed shrimp in a tangy, spicy Goan sauce and served with crispy naan — goes well with the sake. It was nice to get Indian flavors that are different from the same old things we have in Hawaii. 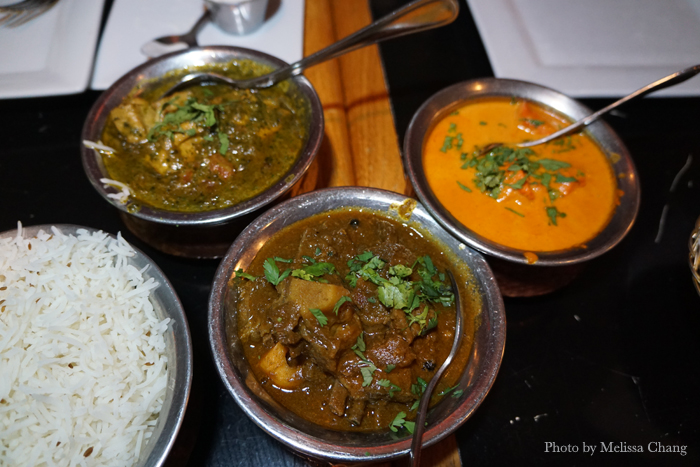 Jodie ordered an off-menu cilantro chicken (about $16, left) that was excellent. It wasn’t quite a curry, but it had interesting flavors that brought out the herb flavors without being grassy. The goat curry ($15, center) was tender and not gamey at all. And you can’t go wrong with the chicken tikka masala ($15.75), simmered in a tomato cream sauce. 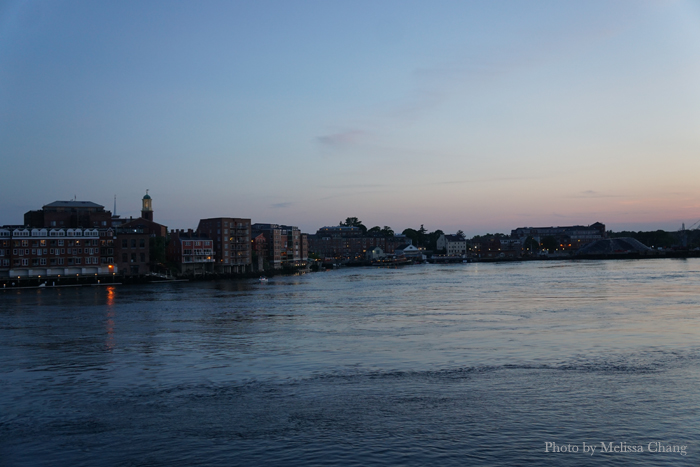 We walked off dinner wandering over the bridge that bordered Maine and New Hampshire. It’s so cool to be so close to the borders of many states!

In that first day alone, we caught each other up on so many things, yet by the end of the trip, I’m not sure that we finished talking about everything. Everything had changed in our own lives since our student days: Our parents had passed, our families had grown, our health had morphed with age and we and our friends had all gone on to careers that suited us. It was nice to see that Jodie and James now own a brand management and digital marketing agency, and how it’s grown — much like my own social media marketing company. Jodie’s personality — which is pretty much the same! — actually has helped them to grow and sustain their clients, while James, being sort of opposite, keeps the work going. I was most impressed at how marriage and children look so good on Jodie; she’s still the same fun and crazy girl, but completely settled.

It was seriously like I had traveled through a time warp. So much time had passed and so much of life had happened as we traveled different paths 5,000 miles apart. But it was amazing to see that after 30 years, our core identities and our friendship had not changed.

Up next: Sightseeing around New England! To see all photos from this part of the trip, click here.