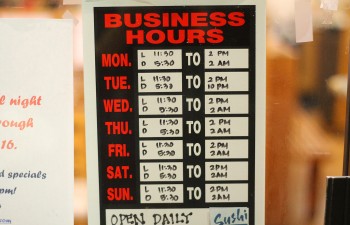 Open until 2 a.m. is what we’re looking for.

It’s after midnight, and your stomach is growling. Besides standing around empty parking lots wondering where to go, after-hours eaters often share something else in common — they’re looking to save a buck. Maybe you blew most of your cash on cover charges or drinks, hopefully on someone new you met. However, food trumps love, especially when it’s late, so I’ve come up with my favorite places for late-night cheap eats.

What do I consider late and cheap? Generally, eateries that still serve food after 1 a.m., with prices around $10. Also I stuck to places in town, since most night activities occur there. Disagree with my list or think you have a better one? Let me know in the comments.

Taiyo makes the list for being open until 3 a.m. on Fridays and Saturdays. If you need your ramen fix after or even before your late-night escapades, Taiyo is definitely an option, with more than 10 varieties of ramen, including seafood, wonton and katsu. Best part: It's under $10. For ramen connoisseurs, there are better places to go, but not after 1 a.m. If you're really on a budget, you can opt for the small curry plate ($5), which comes with a respectable amount of rice, curry and meat. (I had to ask the server if they really gave me the small.)
Taiyo Ramen
451 Piikoi St.
808-589-2123

Here's an old standby for the McCully-Moiliili crowd who want a late-night alternative to Zippy's. Although the quality of food between Sanoya and Taiyo is comparable, Sanoya stays open until 3 a.m. As far as parking, they only have a few spots in back, but street parking is usually available along King Street. Although known for its ramen, Sanoya also has an appetizers menu with gyoza, tofu, katsu and more, with nearly everything under $5. If that requires too much thinking at a late hour, there are combination plates, all under $10. I recently had the Udon Set, which came with udon, chicken katsu, a scoop of rice and a side of kimchee. The portions were generous; I actually couldn't finish it, which makes me think with Sanoya, you definitely get your money's worth.

No. 3: The Window at Lucky Belly

Another of my go-to spots is Lucky Belly, not the restaurant, but its side window that opens from 10 p.m. until 2:30 a.m. Thursday through Saturday. Affectionately known as The Window, it would have topped my list if the parking weren't so tough, there was more seating, and it had better hours. There's a small wooden bench available for diners, but most just stand to the side and happily grind away. There are only three items, but all are just $5. The menu changes every week, depending on what the chef feels like making. It's always an adventure, just like being in Chinatown. The quality of food is consistent with other Lucky Belly fare, so it's a great value. Here's the pork belly bao, which comes with sake hoisin and pickled cucumber.

Popular with the University crowd and people who live in the neighborhood, Sushi King offers midnight specials available after 10:30 p.m. every night. They're a bit on the pricier side — around $12 — but if you're willing to throw in a few extra bucks, you get decent quality Japanese food. Sushi King also made my list because of its hours, decent parking and better quality food than Sanoya and Taiyo. I recently ordered this salmon cutlet ($11.45) on rice, which included salad, miso soup, and six pieces of spicy tuna. The portion wasn't overwhelming, but what set off the set was the spicy tuna. The spicy tuna, however, is limited, so you may have to settle for either a California roll or cone sushi instead.

Yanagi Sushi tops my list with its combination of good food, free parking and decent hours. Yanagi stays open until 2 a.m., except on Sundays, when they close at 10 p.m. (Note though that the last order is at 1:30 a.m.) Yanagi beat out everyone else because of its late-night specials menu, with most dishes $10 or less, and a few items around $15. The menu includes such things as broiled salmon, fried baby tako and kurobuta sausage. Rolled sushi is available for about $5, along with combination plates ranging between $10-$14. Deciding to splurge a bit and being a spicy tuna fan, I recently opted for the spicy tuna bowl ($9.95). It came in a bowl of rice, topped with decent amount of spicy tuna. The tuna had a very clean flavor. The portions were deceptively generous, as I quickly found myself reaching my limit as I neared the bottom of the bowl. For late-night cheap eats that actually taste good and keep your finances in check, you can't go wrong with Yanagi.