The wait is over. Well, for the most part. 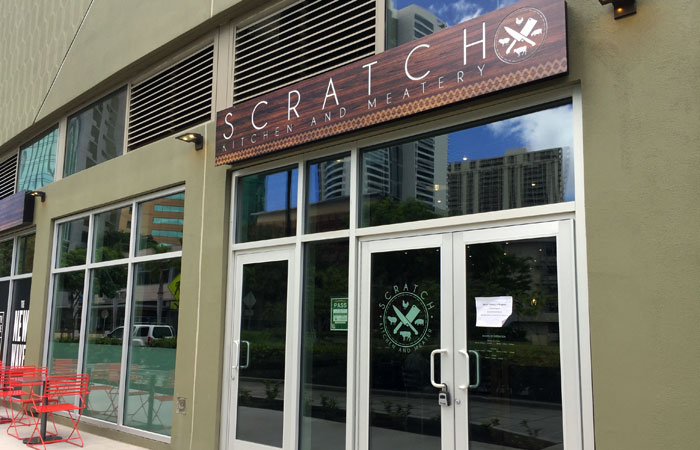 Scratch Kitchen and Meatery is in South Shore Market, with the entrance on Auahi Street. 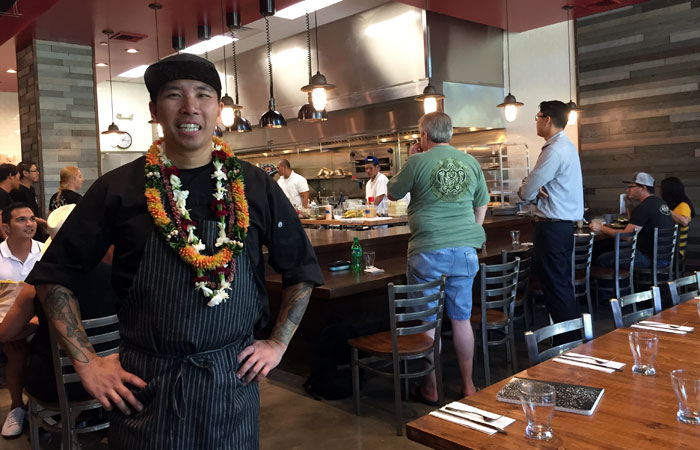 Scratch fans will like that the new location’s opening menu is almost identical to that of the Bakeshop.

“You’ll still find staples like our milk & cereal pancakes, shrimp and grits and pork belly pasta,” says chef-owner Brian Chan. “But there will be a few things that are different. We’ll do a few more meat-centric daily specials.” 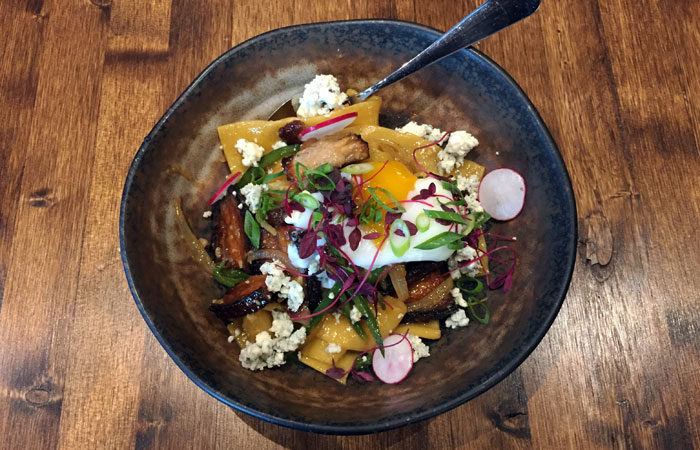 The cider-braised pork belly & apple pasta ($15), a crowd pleaser at the Bakeshop, is on the menu at Ward. 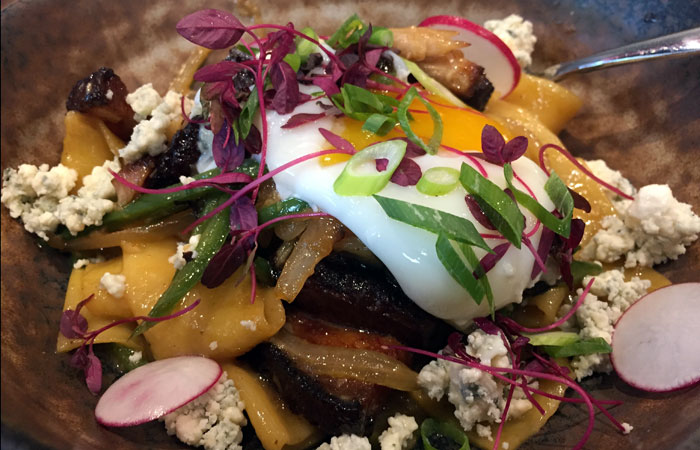 Hand-cut noodles are from a pasta company in Kalihi and the pork is from Waianae.

One of the dishes you can only find at Meatery is the Strawberries n’ cream stuffed French toast ($11). It was featured as a special at the Chinatown location and was a hit. 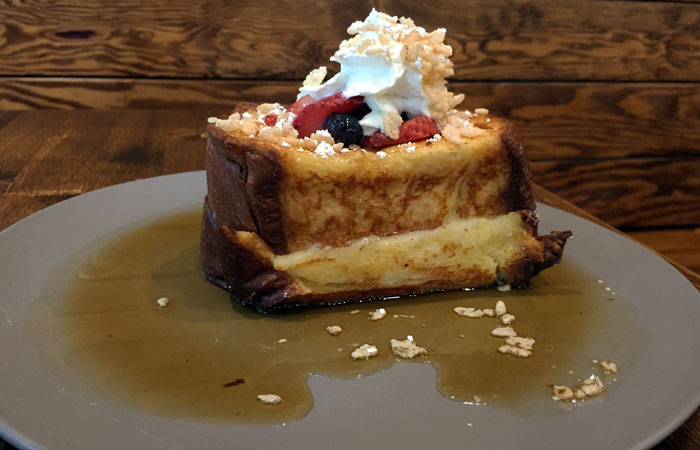 This French toast is topped with honey whipped mascarpone and crunch granola in a pool of sticky maple syrup.

The toast is billowy, yet dense. It’s stuffed generously with delicate marscapone, cream cheese and strawberries. 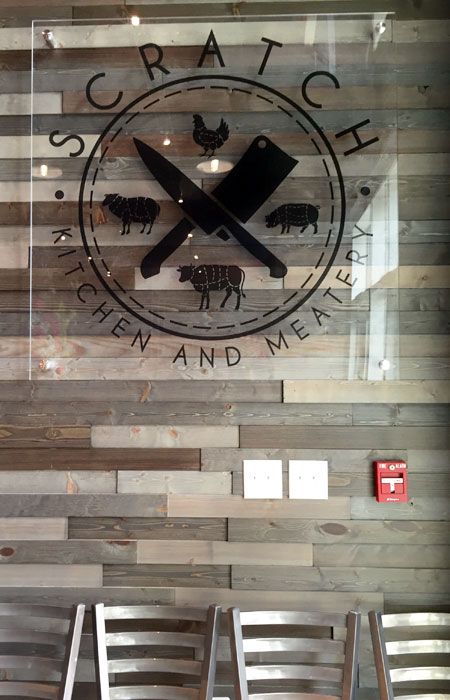 The difference in the look and feel is immediately striking. Bakeshop in Chinatown, a cozier space, is bright with white subway tiles. Meatery’s high ceilings and larger size allow for darker colors and more drama. Chan says he designed it that way on purpose. 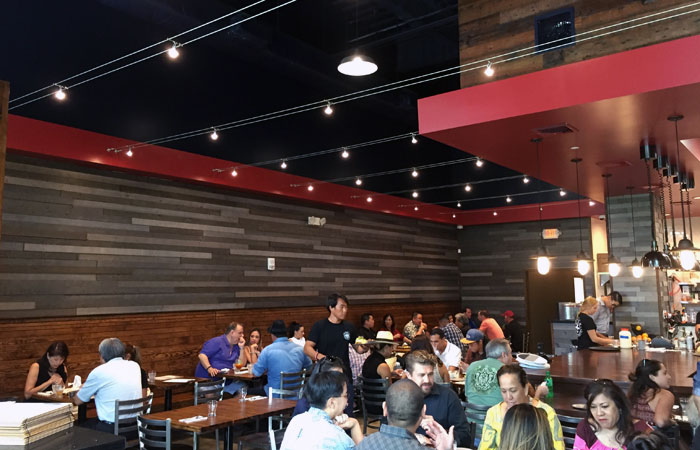 “I designed the Bakeshop more for female aesthetics — the light colors and airy feel,” he says. “For Meatery, I wanted to focus more on dudes. We made a lot of stuff by hand — we tried to keep it as personal as possible.” 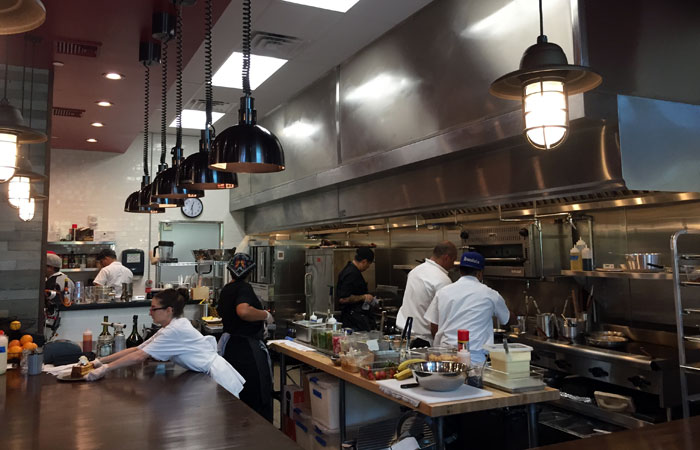 There are two kitchens — the open kitchen in front and a prep kitchen in back. The total kitchen space is about half the size of the restaurant.

The biggest difference at Meatery: dinner service, which starts in May. The concept will center around Southern fare and house-cured meats. Chan says the restaurant will eventually have its own butcher and offer charcuterie for sale in a deli case.

“We’ll do classic Creole Cajun dishes and traditional southern dishes that someone’s grandma would make,” Chan says. “I tried to make it authentic Southern as possible, but keep it fun and unique.”

The Meatery team is already preparing, since a lot of cured meats take time to age and mature. When it starts in May, dinner will be from 5 to 9 p.m. daily except Sundays.

“We’re going to have an extensive bourbon and whiskey list and a bunch of different cocktails,” Chan says. “It’s something I’ve never done before, so it’s pretty exciting.”

Born and raised in Honolulu, Kelli moved back to Oahu in 2015 after pursuing her master of arts in journalism at USC and working for a year in San Diego. When it comes to food, Kelli's favorites can be boiled down to three main categories: brunch, cheese (mac & cheese) and desserts. Her interests include working out, traveling and all things Disney. Follow her on Instagram and Facebook: @kellishiromabraiotta.

Egghead is back in town: New brunch spot opens in Kalihi