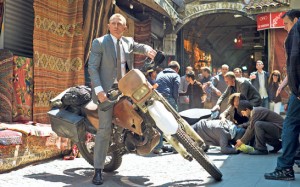 As a huge James Bond fan, I was wondering with great anticipation how the film franchise would celebrate its 50th anniversary. I have seen every Bond film from the first (“Dr. No”) to the last (“Quantam of Solace”), and even the one that doesn’t officially count (“Never Say Never Again”). Sure, some were better than others, but they were all at the least entertaining. After all, who could resist exotic locales, cool gadgets and beautiful women, not to mention the most iconic hero in film history?

I must admit, however, that I was a bit skeptical when I heard that Oscar-winning director Sam Mendes would helm the newest film, “Skyfall.” After the smashing success of “Casino Royale,” it was widely agreed that its follow-up “Quantum of Solace” was a bit of a mess and fans were hungry for anther good Bond film, especially after a long four-year wait. But would the director of heavy dramas such as “American Beauty” be a good fit?

The answer is a resounding yes. In fact, I would love it if Mendes directed a few more Bond films. His take on the British spy is so captivatingly perfect that I cannot think of a single flaw in the film. Of course, it helps to have a cast with an Oscar-heavy pedigree. Winner Javier Bardem and nominees Ralph Fiennes and Albert Finney join franchise regulars Daniel Craig and another Oscar winner Judi Dench to make up a very formidable cast. Fiennes brings his typical stoic demeanor in playing a British bureaucrat who thinks M (Dench) should retire and Finney plays a tough farm hand who looks over Bond’s childhood home. Ben Whishaw also makes a terrific new Q, the supplier of Bond’s many gadgets. His youthful arrogance and innocence is a refreshing new take on the character. But it is Bardem who steals the show. His villain Silva will go down as one of the greatest Bond villains ever. When he finally makes his appearance about halfway into the film, he not only owns every scene he’s in, he owns Bond himself. He’s ruthless, evil, scheming and always one step ahead. 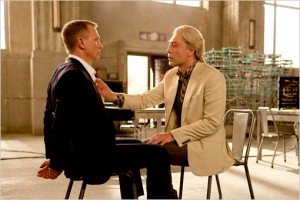 “Skyfall” of course has Bond visit the requisite exotic locales, but I loved that this film brought him back to England to defend his home ground. After a terrific opening sequence in Turkey involving a motorcycle chase on rooftops and a fist fight on a speeding train, Bond is presumed dead, but returns after learning that the MI6 headquarters has been bombed. He makes a quick stop to Shanghai and Macau, but spends the second half of the film entirely in London. Bond has always hopped the globe for all of his missions, but “Skyfall” makes this latest one personal. Someone is attacking his home turf and hurting people he cares about.

Mendes surprisingly has a great eye for action and while the action scenes look great, I was much more impressed with his dedication to characters and story development. This isn’t the typical bad guy out to destroy the world 007 movie. It’s a much deeper and meaningful film with themes of betrayal, revenge and redemption, not the typical elements of a Bond film. But not only was Mendes able to tell such a great tale, he also very naturally inserts many nods to Bond films of the past 50 years. Fans of the 007 movies will have a blast recognizing these moments. One such moment is an incredible looking opening credits scene accompanied by the theme song sung by Adele. The images will no doubt bring back memories of many previous Bond films. 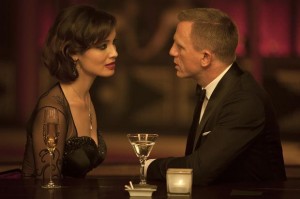 And while I’ve been going on and on about the stellar cast and the flawless direction by Mendes, the unsung hero of the film is actually cinematographer Roger Deakins. Every scene is visually stunning, and I can’t remember seeing a better-looking film this year. From a local Turkish market, to the neon heavy Shanghai skyline, to the makeshift underground MI6 headquarters, Deakins makes every scene pop. A fight scene with silhouettes in a Shanghai high-rise building is especially beautifully shot. I’m already looking forward to seeing his work again in high definition on Bluray.