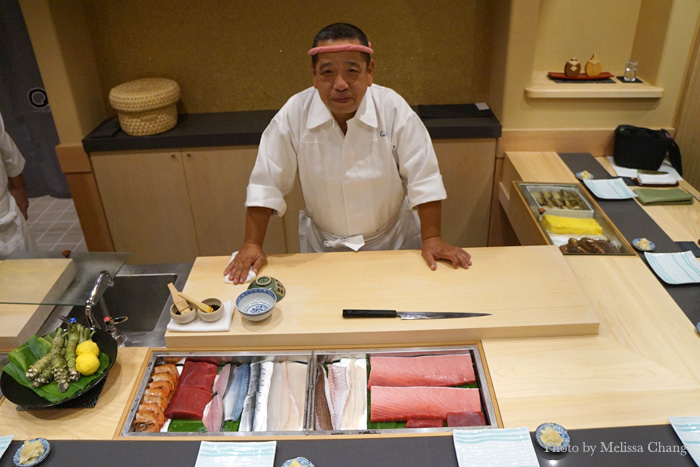 Sushi fanatics have been waiting for Maru Sushi, an iconic Michelin-starred sushi bar from Sapporo, to open in Honolulu. Founding owner and executive chef Takeshi Kawasaki held a little pop-up a few months ago to test the waters, and a whole week of dinners sold out in less than a day.

Kawasaki actually retired and left the restaurant in his son’s hands, but wanted to keep his skills sharp while enjoying life in Hawaii. So instead of flying all the way to Japan, you can enjoy his exquisite sushi right on the edge of Waikiki. Honolulu has chain restaurants whose other locations have Michelin stars, and we have chefs who have worked in Michelin-star kitchens. But Kawasaki is our first Michelin-star chef. 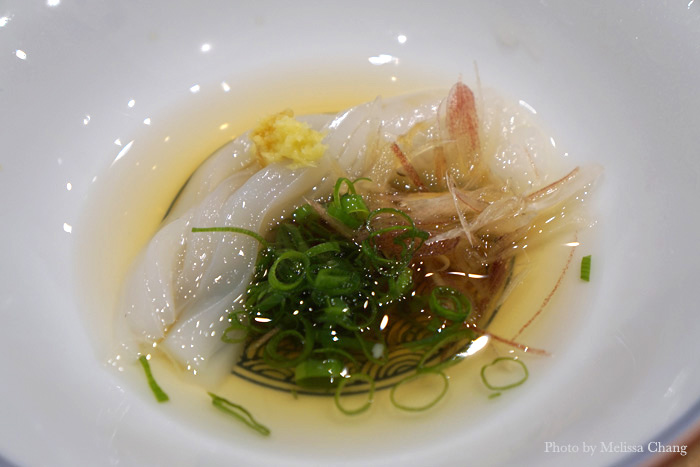 Ika “somen,” where the fresh, tender squid IS the somen. 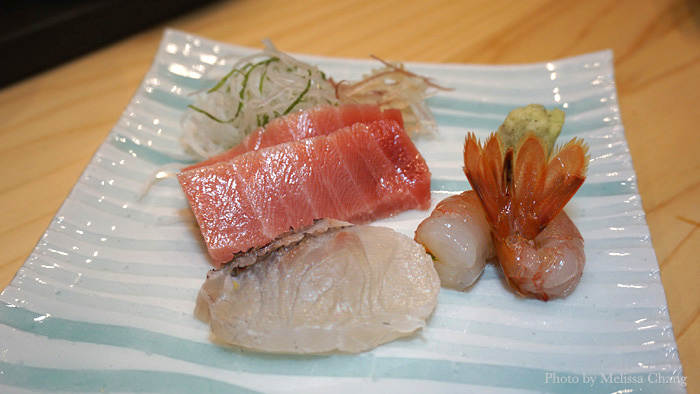 An assortment of sashimi to start: chutoro (fatty tuna), flounder and amaebi. 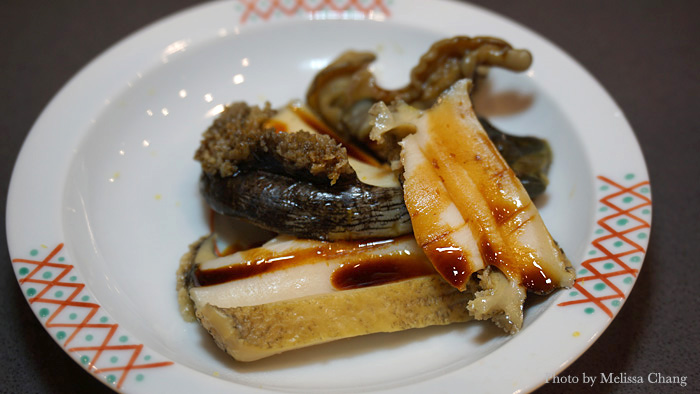 Fresh Kona abalone, cooked to perfection and topped with a special soy reduction. 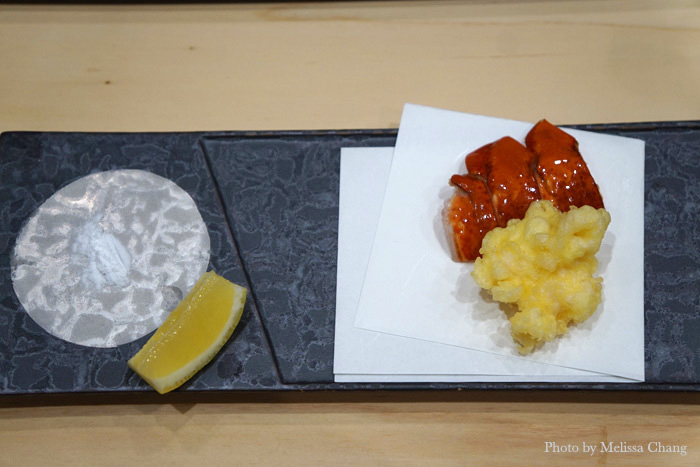 Local lobster tempura with a special, powdery-fine Japanese salt that is only slightly salty. Amazing! 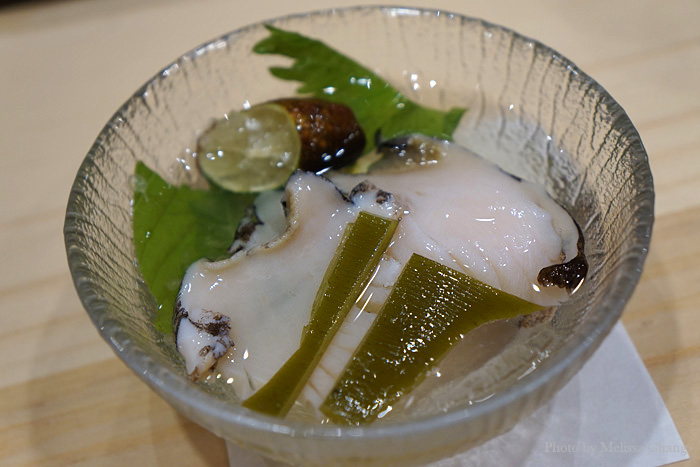 More Kona abalone, this time salted, shucked and sliced right before us. The dashi isn’t for drinking, but with the mix of herbs and finger limes, it makes the abalone taste like it came right out of the ocean. You can eat the konbu, which is imported from Hokkaido.

At this point, we got a little intermezzo of salt-cured murasaki (purple) uni that was unlike anything I’d ever had. Who would have thought that such a process would be so delicious? Usually you don’t mess with fresh uni, but here they wrap it in konbujime and press it into a mold, and pack it with salt. The salt never touches the uni, but the flavor is still imparted. 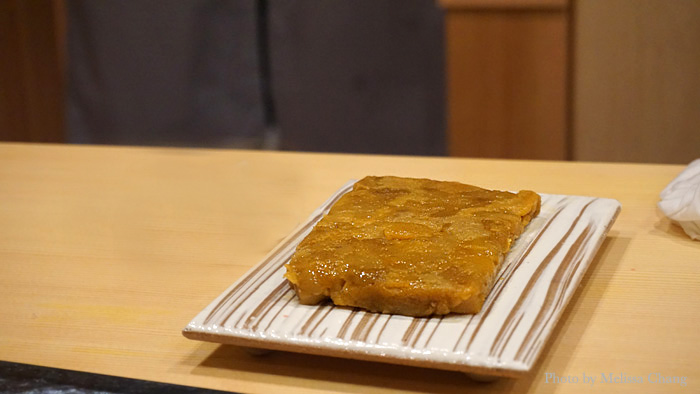 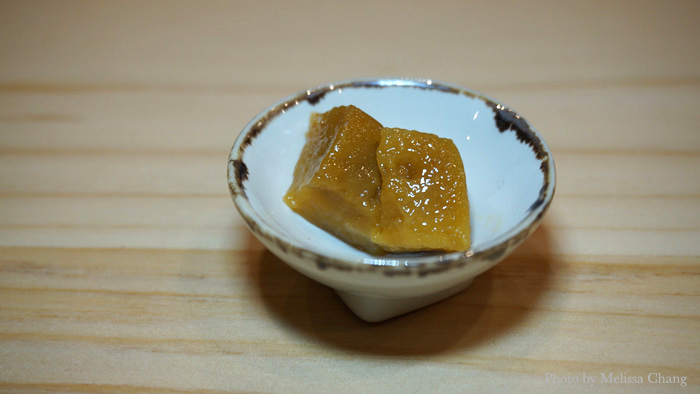 Everyone got two little bites of this heavenly intermezzo. It’s slightly salty, slightly rich, and a complete treat.

Continuing on with the culinary adventure… 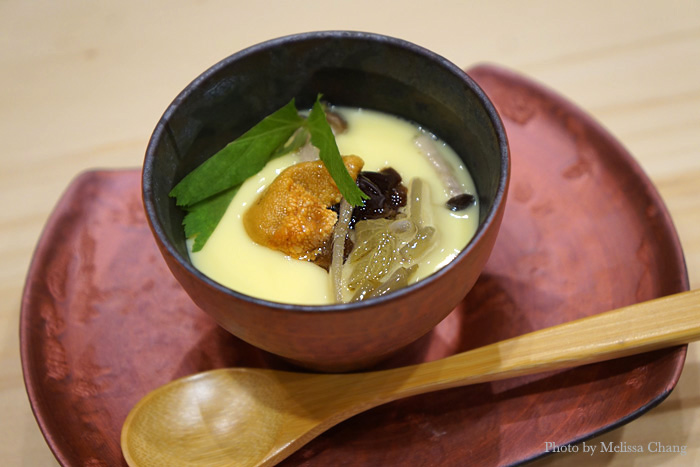 Quite possibly the best chawan mushi you’ll ever have, a very light, silky egg custard with uni, shimeji mushrooms, and more. It has a whole medley of flavors and textures. 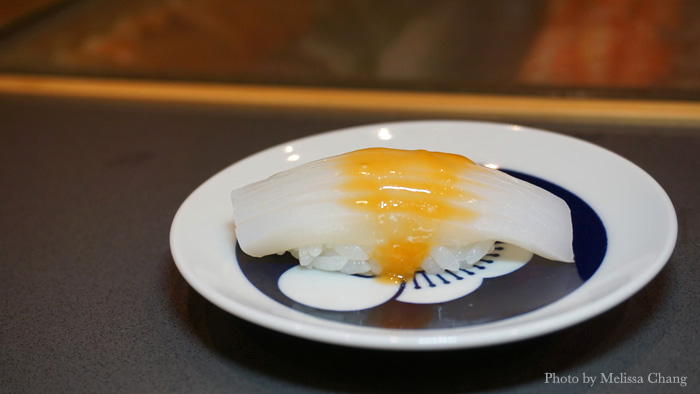 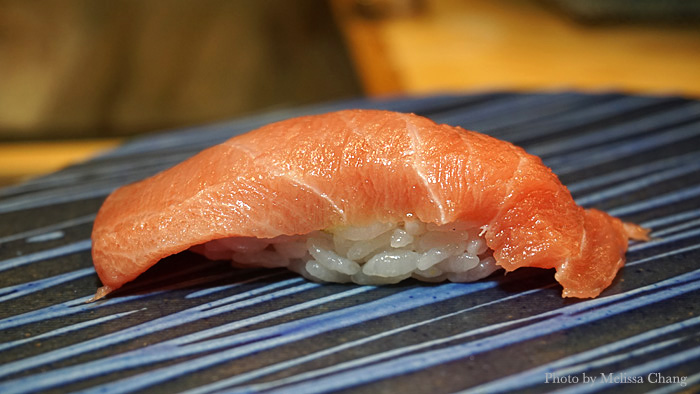 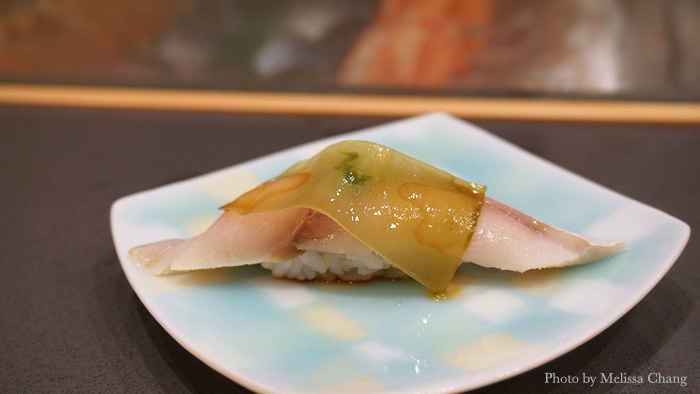 When Kawasaki had his pop up, this was my (and chef Keith Endo’s) favorite. Mackerel topped with a special blend of green onion and ginger to impart a garlicky flavor, and topped with konbu. It’s the most unique piece of sushi ever, and even if you don’t normally like oily fish, you’ll want more of this one. 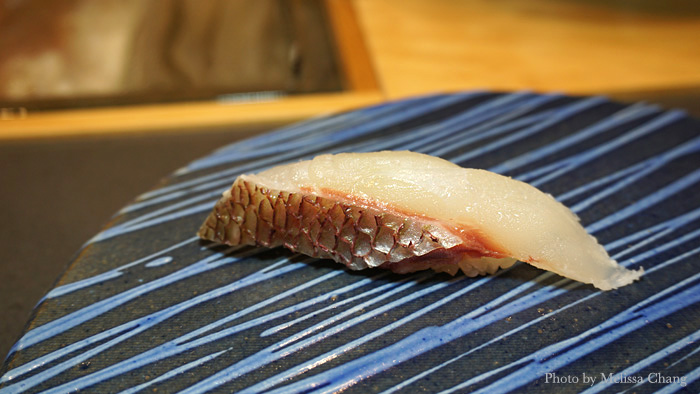 He includes slices from “regular” sushi bar fish, but every bite is fresh and clean, and a cut above. 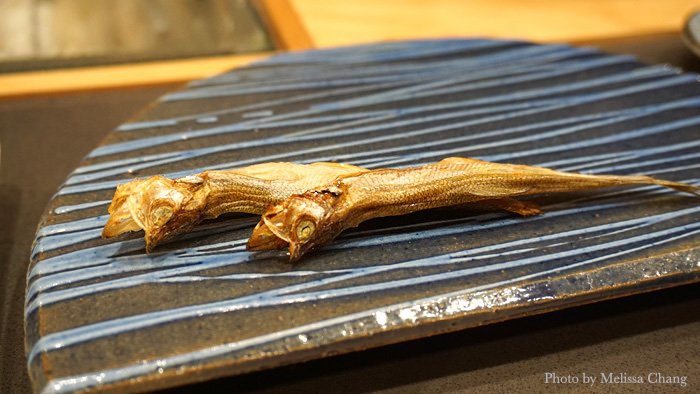 Another intermezzo, special smelt that’s been salted and dried. This is very good with sake! 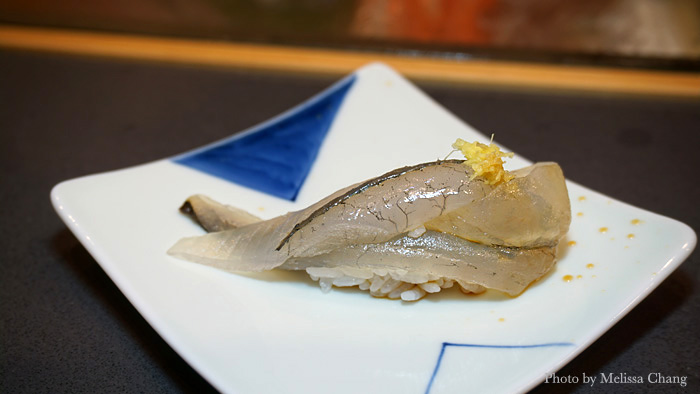 Sayori is a skinny, seasonal fish usually caught between winter and summer. Since the body is so skinny, Kawasaki, takes the fillets and braids them artfully atop the rice. Delicious and pretty! 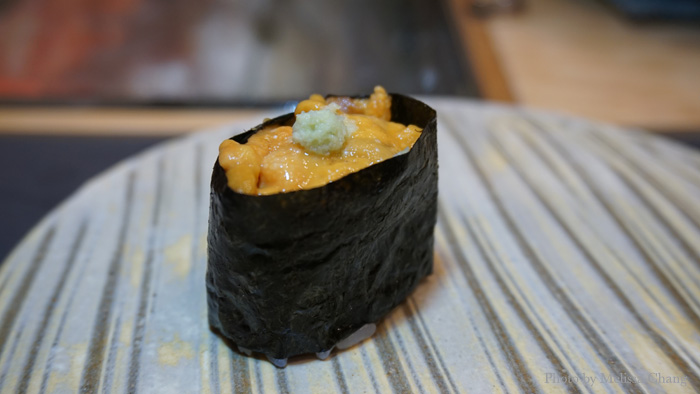 Bafu uni: When we got this piece, we were instructed to dab a little bit of shoyu on it with our chopsticks, which was very good — but it’s just as stellar eaten plain. 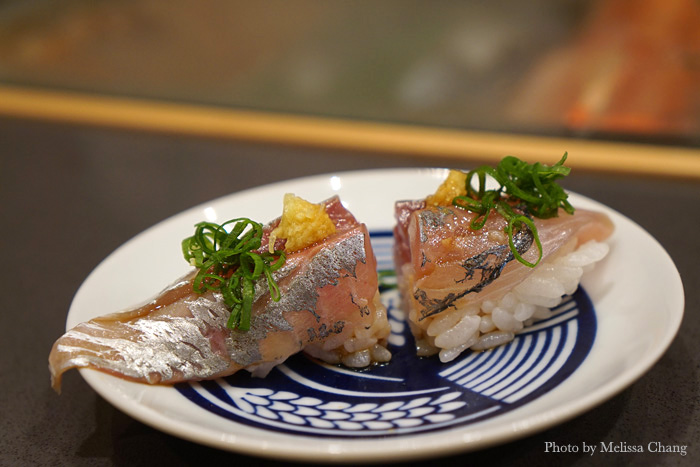 Aji is a milder-tasting fish than saba, and is most often served with green onions and some grated ginger. Here we were taught about the Japanese tradition of cutting sushi in two to accommodate women, whose mouths are smaller — they believe you should look beautiful when you eat. 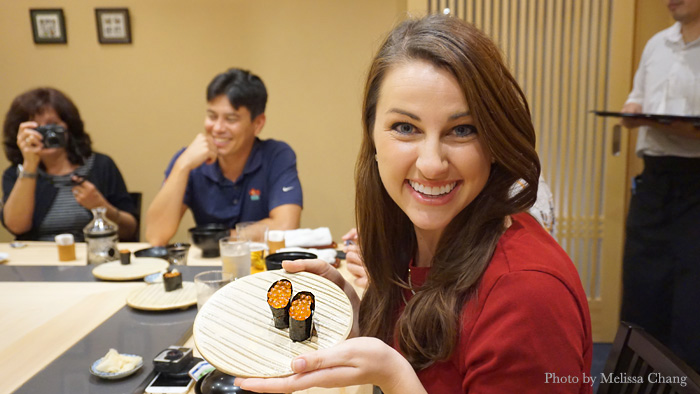 Everyone gets one piece of ikura, but KHON’s Kelly Simek got so excited about it that she got two! 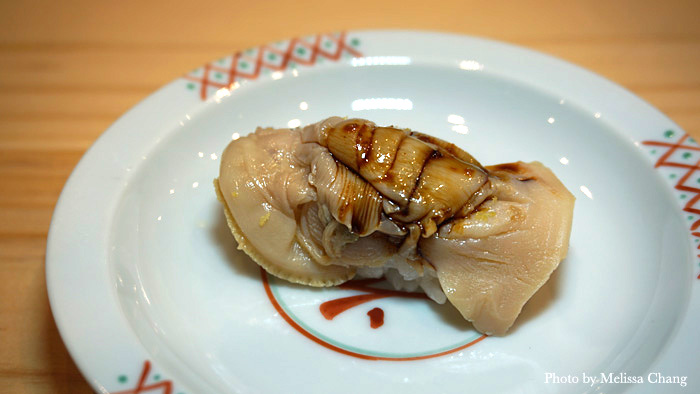 Normally the clam nigiri tends to be overly crunchy and chewy, but Maru’s Hamaguri clam is a bit more tender, so it’s easier to eat. You enjoy the clam flavor more than you wrestle with any texture issues. 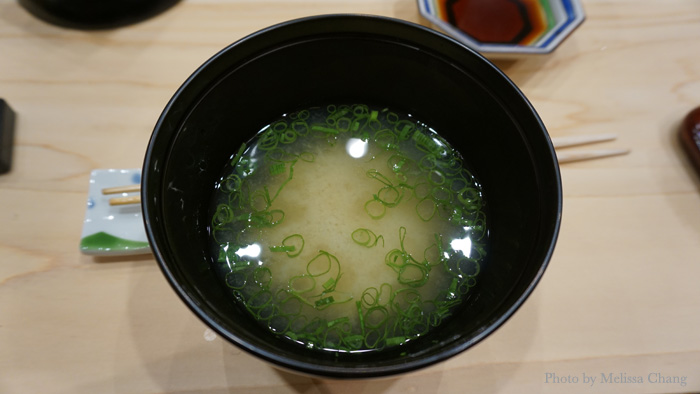 Quite possibly the best miso soup I’ve ever had. Made with lobster stock, the broth is rich and extremely hearty. 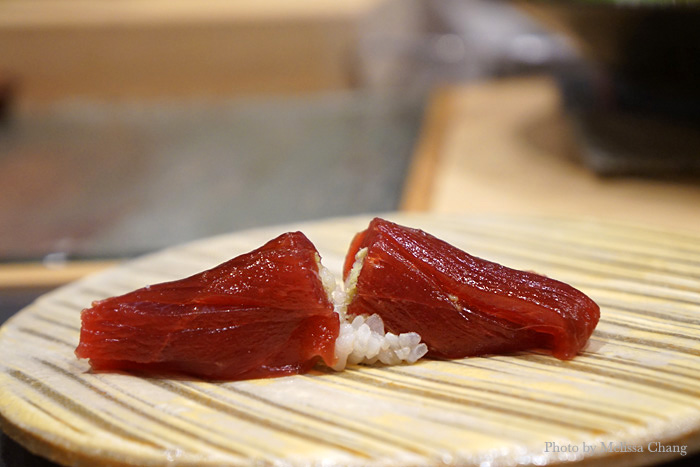 We noticed a plate of maguro being brushed and marinated with shoyu during dinner, and toward the end he served it to us, perfectly salty (all Japanese restaurants, especially sushi bars, have their own custom shoyu). 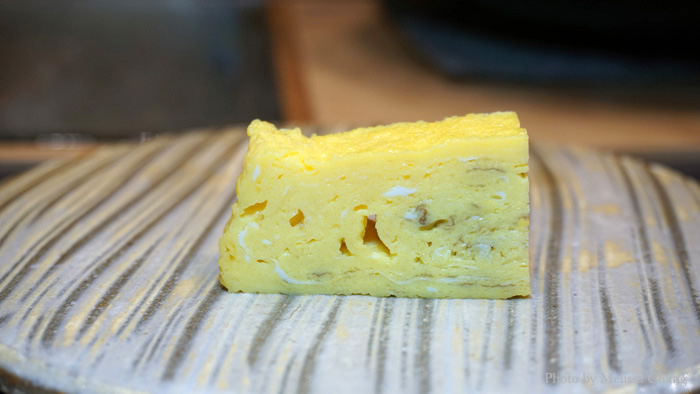 The tamago that signifies the end of the meal. Kawasaki’s is more eggy than cakey, which I like. 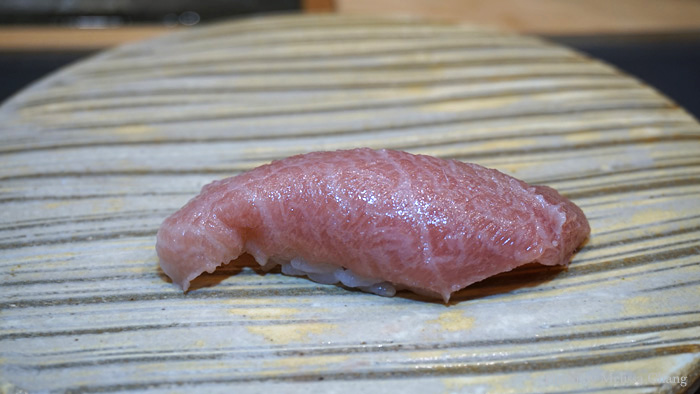 Many people will ask, is this sushi worth it? Like all high-end sushi bars, you get to eat unusual and/or high-end items, or unique preparations of things like the salt-cured uni. But you very rarely get to eat these prepared by a Michelin-star chef, and you can taste his skill in every bite. The meal is more than just an outstanding sushi dining experience; each time I’ve eaten Kawasaki’s omakase, everyone at the sushi bar was excited, surprised, and exhilarated with each dish (and some, moved to tears). It’s more than dinner, it’s a full ride.