Dubai skyline at dawn by Jan Michael Pfeiffer. The Burj Khalifa is the tallest building there.

One of the most striking things about the United Arab Emirates (UAE) and Dubai in particular is the grand scale upon which they build things, thanks in part to the money flowing from the oil industry there. But here’s something most people don’t know: although many elements of Dubai’s trading infrastructure were built on the back of the oil industry, revenues from oil and natural gas account for less than 5 percent of the emirate’s revenues. Real estate and construction (22.6 percent), trade (16 percent), entrepôt (15 percent) and financial services (11 percent) are the largest contributors to Dubai’s economy. 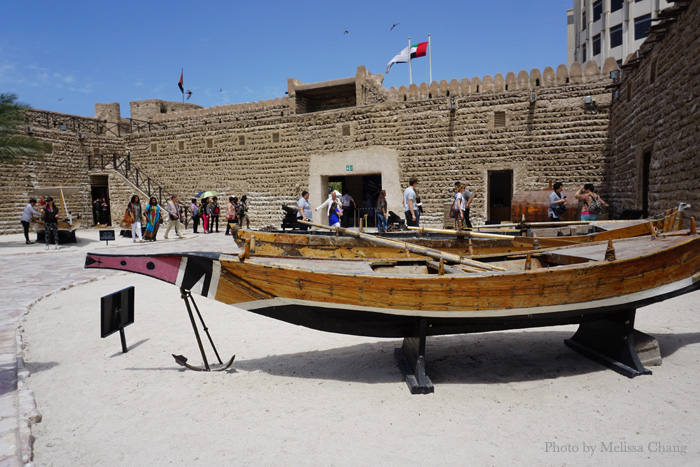 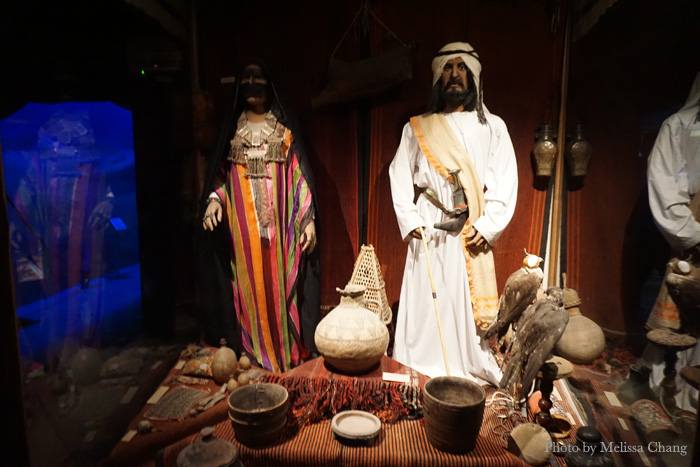 It wasn’t always like this. A visit to the Dubai Museum at the Al Fahidi Fort — the oldest existing building in the city — will show you what life was like in the area before oil was discovered. In fact, they have actual artifacts from several archaeological digs that date back to the third millennium B.C., including a grave of a couple that will remind you of the musical “Aida.” Well, it did for me, anyway.

Despite this little slice of history, Dubai as we know it is really not very old. Visit the world’s tallest building, the Burj Khalifa, and the view will show you that this city pretty much sprouted out of the desert from nothing in the last 10 years. The real estate market has had its share of downturns there, but you’ll see cranes everywhere as the city continues to grow and build out as they prepare to host the World Expo 2020. 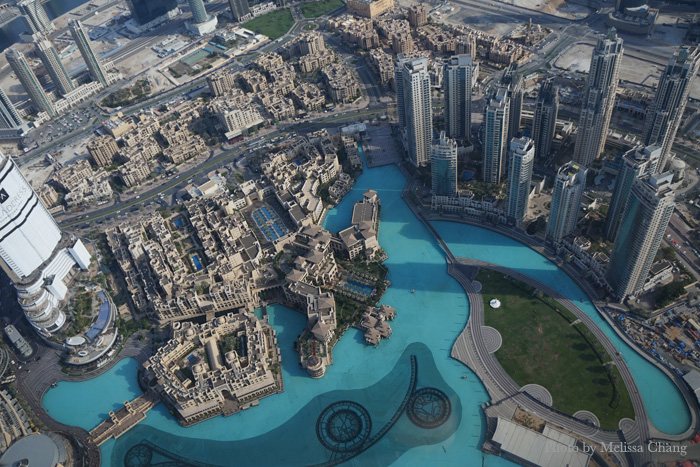 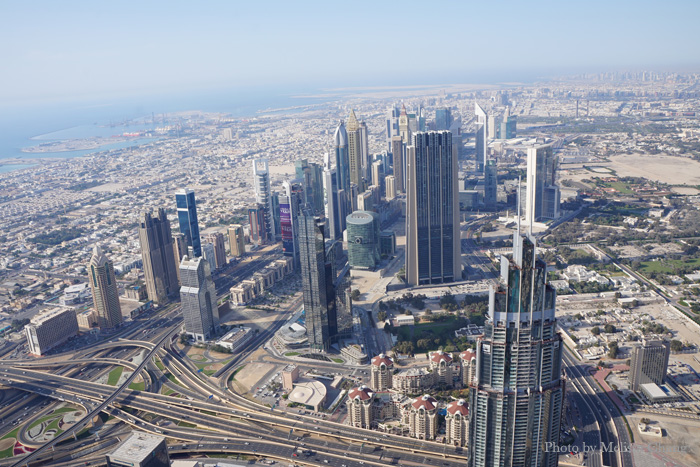 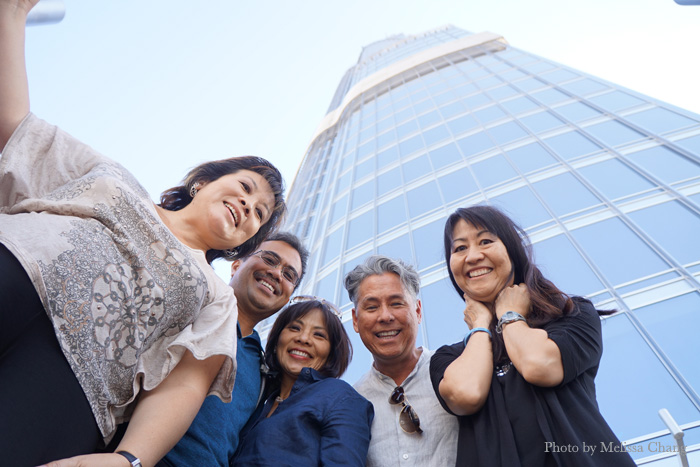 The Burj Khalifa is the tallest structure in the world, at 2,722 feet and 163 floors. The 124th-floor observation deck was originally the world’s highest observation deck; in December 2011 it was surpassed by Cloud Top 488 on the Canton Tower in Guandong, China, at 1,601 ft. Not to be outdone, in October 2014 the Burj Khalifa opened the 148th floor SKY level at 1,821 ft., regaining the title for the highest observation deck in the world. You’re getting the theme of things here, right? My tower is bigger than your tower?

If you travel the world, you’ll find there are a lot of familiar structures from Shanghai, Singapore, Las Vegas and more in Dubai — but bigger. 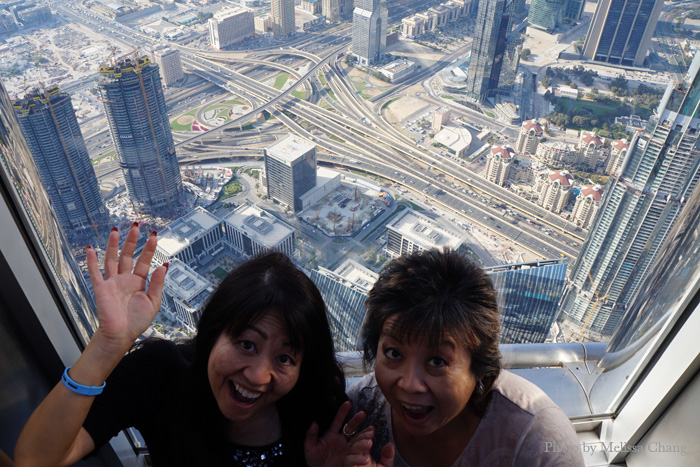 Don’t visit the Burj Khalifa if you are afraid of heights!

Tip: Reserve your tickets for the Burj Khalifa at least a day before you plan to visit, as they sell out quickly. You have to choose a time slot in which you want to go in, and from there you can stay as long as you wish. Don’t think you can just walk up to the ticket desk and buy a ticket for a spontaneous trip. 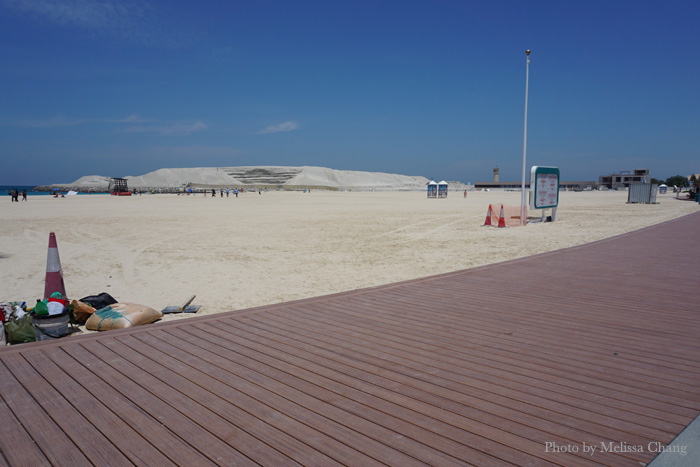 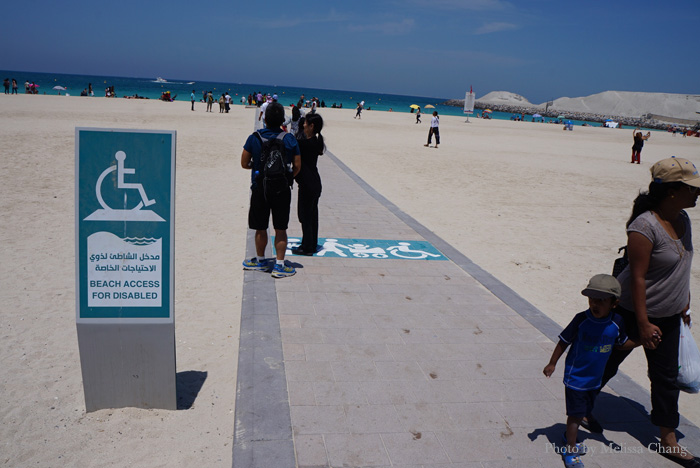 Hawaii people will be excited to get some sun time at Jumeirah Beach, which is wide with no oceanfront structures — much like Copacabana and Ipanema in Rio de Janeiro — so more people can access this view. Feel like a sellout yet, Hawaii? The boardwalk is extremely wide so there’s room for pedestrians, joggers and bikers. The most thoughtful thing I saw that even Hawaii does not have is a super wide concrete ramp that goes from the boardwalk almost to the water, to accommodate wheelchair-bound beachgoers. (Access Surf would appreciate this photo.) 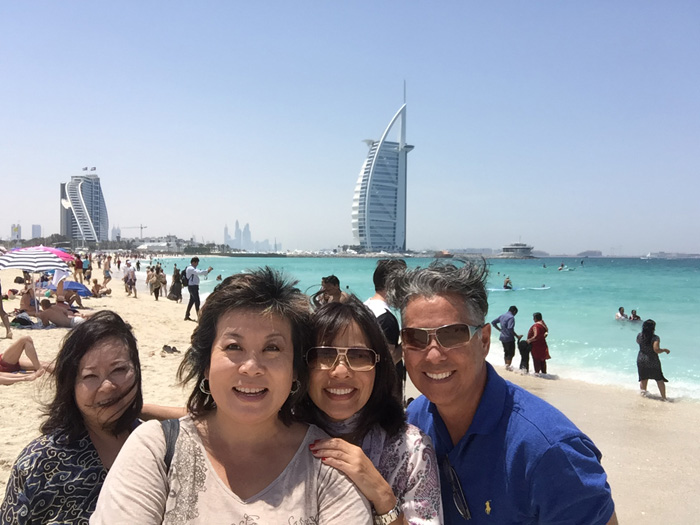 Wish we were there: With Nadine Kam, Avis Thomas and JR Buenconsejo.

From the beach, you can see the Burj Al Arab, the third tallest hotel in the world and one of the most expensive. It’s also known as the only seven-star hotel in the world, a term that hotel management did not ever claim themselves. You can’t even go inside the building unless you are a registered hotel guest or have a reservation at one of its restaurants; I believe the cheapest menu is the tea at about $100 per person (that’s not afternoon tea, it’s just tea).

Needless to say, we never got to go in. 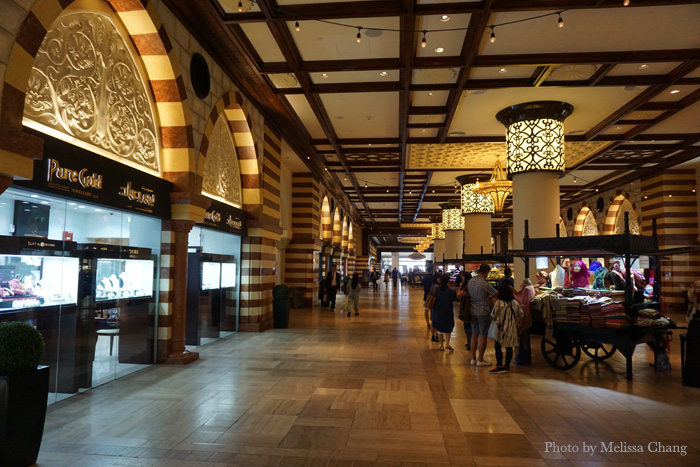 But, back to the mall, where it seems a lot of Dubai life takes place. At first I thought it was odd that our expat hosts, Jolie and Bobby Remington, wanted to go to the mall all the time. Yes, Dubai Mall is the world’s largest mall with 1,200 shops covering 5.4 million square feet. Yes, it’s air conditioned. And yes, it’s got some fantastic attractions, like the Burj Khalifa, a gigantic aquarium and an ice rink. But is it really what Dubai life is all about?

It actually is. We confirmed this with Emirates Airlines chef James Griffith, who has lived there for 24 years. Some of the best restaurants are at the malls, because so much of the population eats there. Plus, the malls and hotels are the only places that are allowed to serve alcohol. So there you have it. 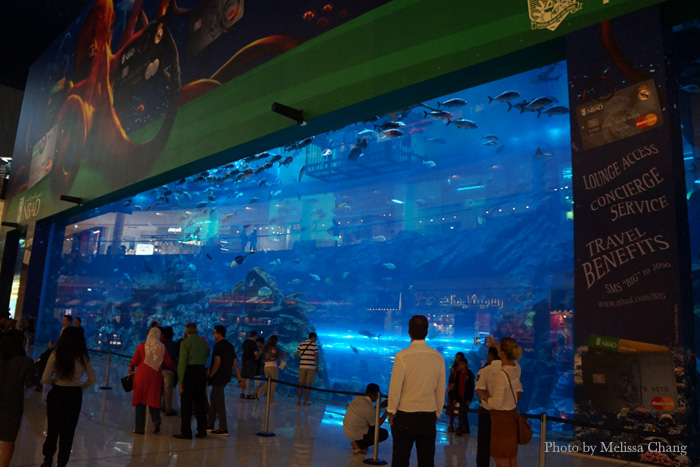 The Dubai Mall aquarium, which actor Rob Lowe visited while we were there. On the same day, too! 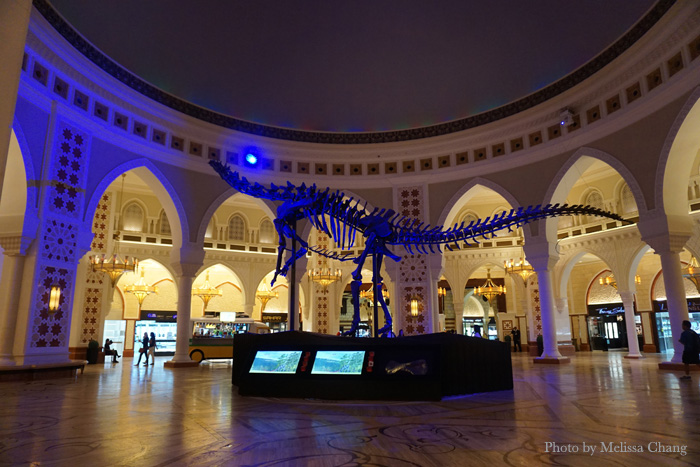 A dinosaur skeleton on display at Dubai Mall. 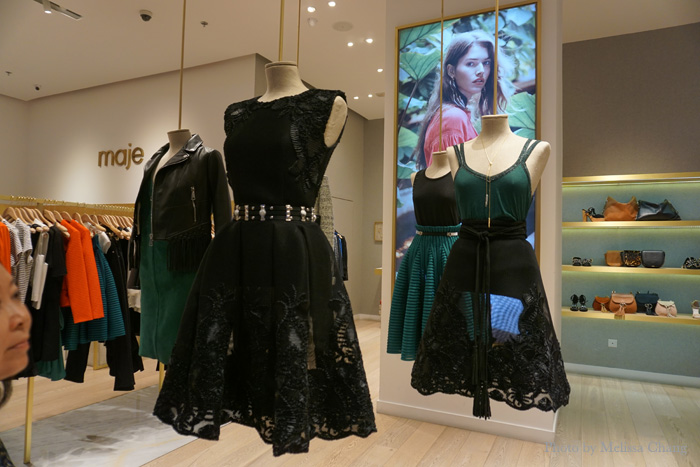 Some fantastic fashion designers get a small section in American department stores; here, they have their own stores. 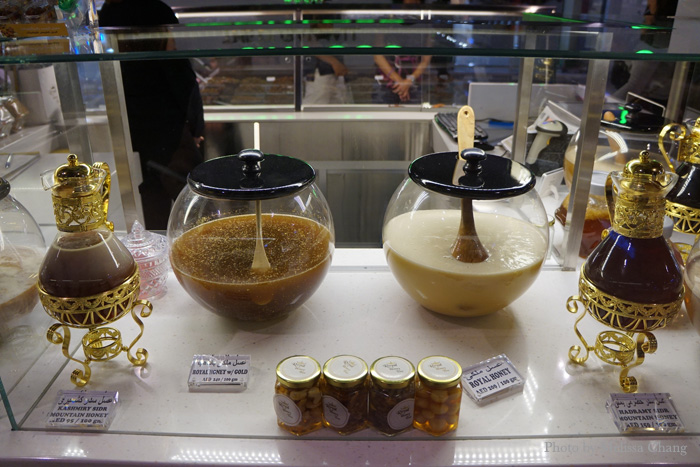 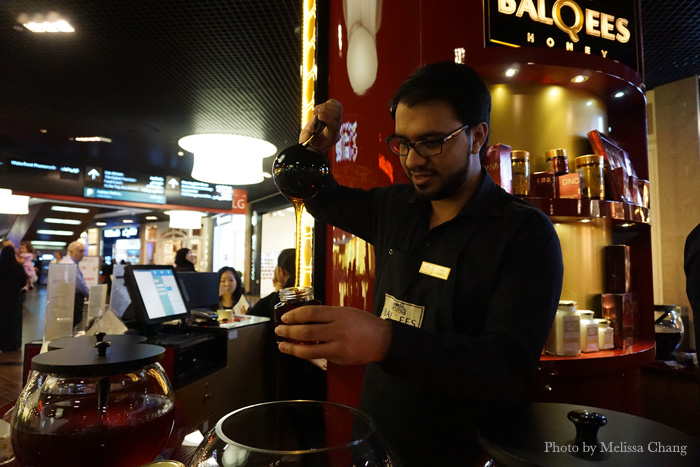 One of the many honey kiosks that you can find at all the malls. Honey is big here, and a lot of it comes from Yemen. We asked if they have any decline in their bee population, and they said no — they believe the decline is due to America’s extensive use of pesticides, since they don’t use many there. Ask the kiosk for a sample, and you can immediately taste the difference even if you are not a honey aficionado. The flavor is extremely rich and complex; it almost makes the honey in Hawaii taste watered down by comparison. 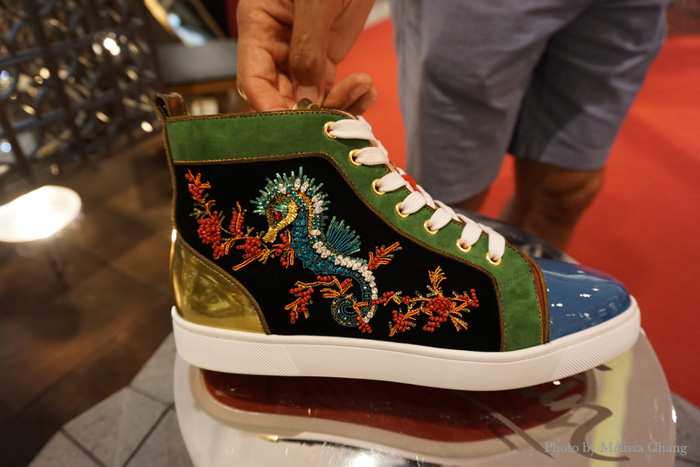 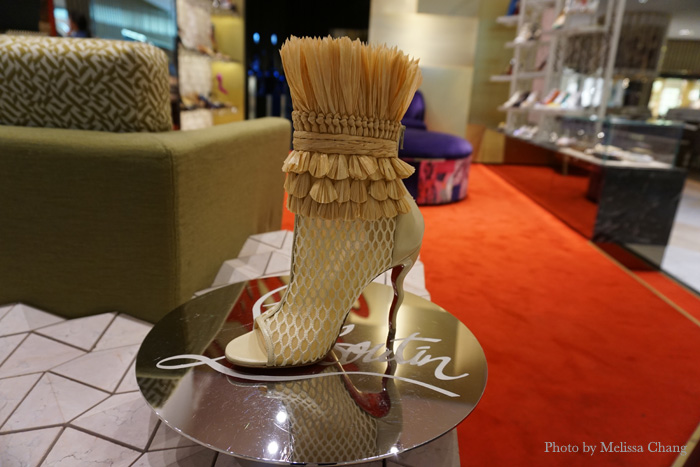 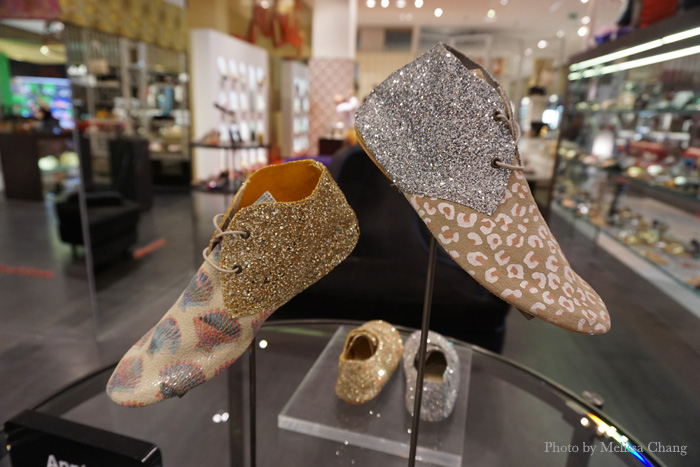 Forget the shoe department. There’s a whole section of the mall dedicated to shoes. 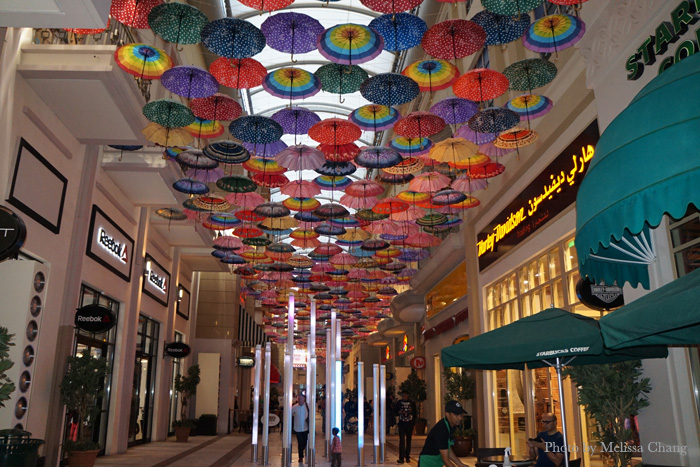 And a whole section of the mall dedicated to jeans and sportswear. Complete with colorful umbrella art, an interactive light/sound display, and a piano that anyone can walk up to and play. 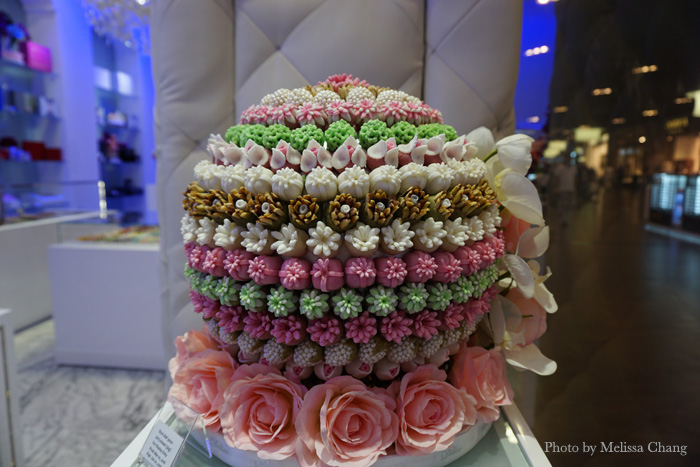 Who needs to eat candy when they have handmade confections too pretty to destroy? 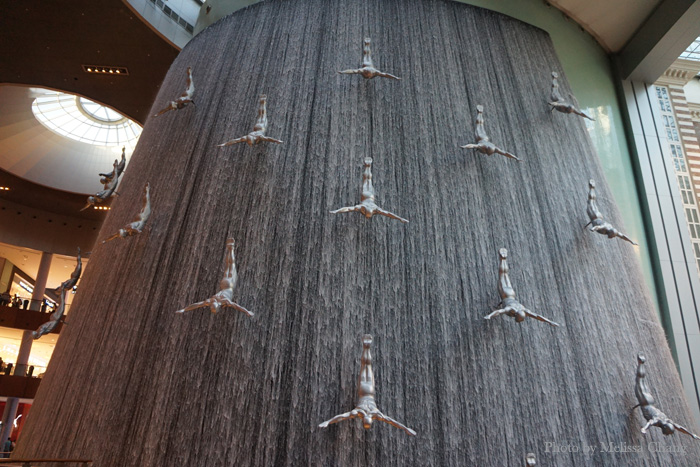 Photos don’t do this art installation justice. “The Divers” is comprised of two separate four-story waterfalls and life-sized fiberglass divers, a nod to a bygone era when pearling was a major source of income for the Emirates.

Finally: I have a dinky little Youtube video of the spectacular dancing fountains at Dubai Mall, set to Arabian music. If you thought the Bellagio Fountains were great, think again. This is 25 percent larger than the one in Las Vegas (of course!) with more elaborate shows.

And if you thought my video showcased a fabulous show, this one will blow it out of the water. Literally.

For those of you who are asking why I’m not posting about skiing in the Mall of the Emirates: We went to Ski Dubai, but didn’t go in — it costs about $80 for the Polar Experience (which doesn’t include skiing) and about $55 for two runs on the slope. The price was steeper than the slope, so we passed on it. 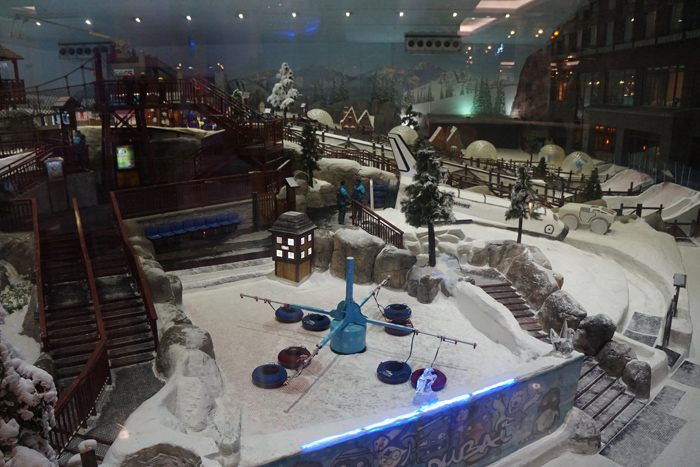 Looking in from the outside of Ski Dubai.

So does the mall food live up to the hype? Up next: What we ate there!