New Zealand, or Aotearoa as it’s known in Maori, is nothing short of magical. From green pastoral landscapes to soaring seaside cliffs, there wasn’t a vista that didn’t enthrall me. Although my six days in Auckland couldn’t do kiwiland enough justice, it’s my hope that sharing a slice of my experience will help you understand why this is a trending travel destination.

Did I mention that this was my first trip abroad? 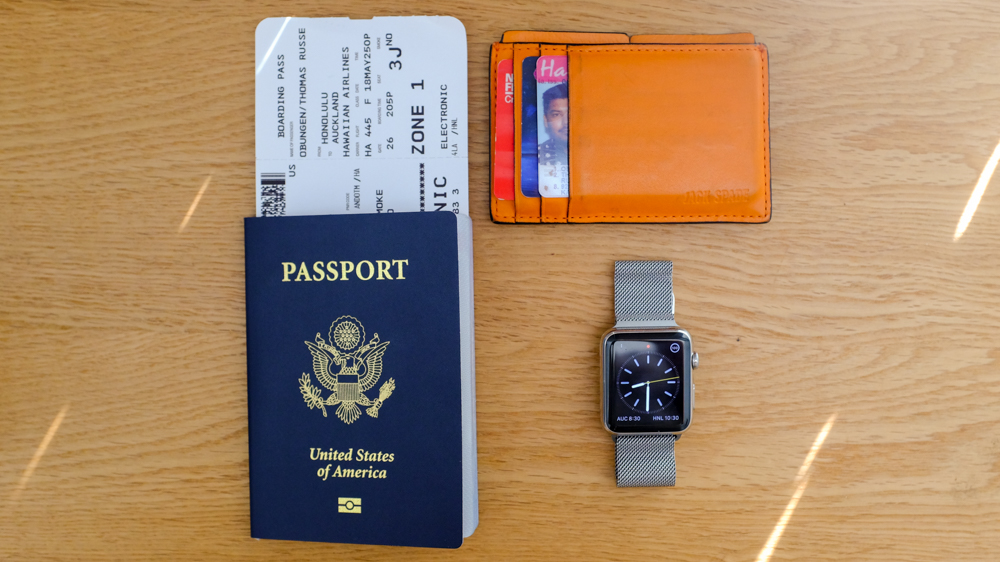 Auckland is a diverse city of just over 1.4 million people, one-third of New Zealand’s entire population. It stretches 216 square miles across an isthmus sandwiched between two active harbors, earning it the nickname of the City of Sails. Commonly compared with San Francisco in geography and climate, Auckland is a perfect city to explore and a gateway to the New Zealand bush. 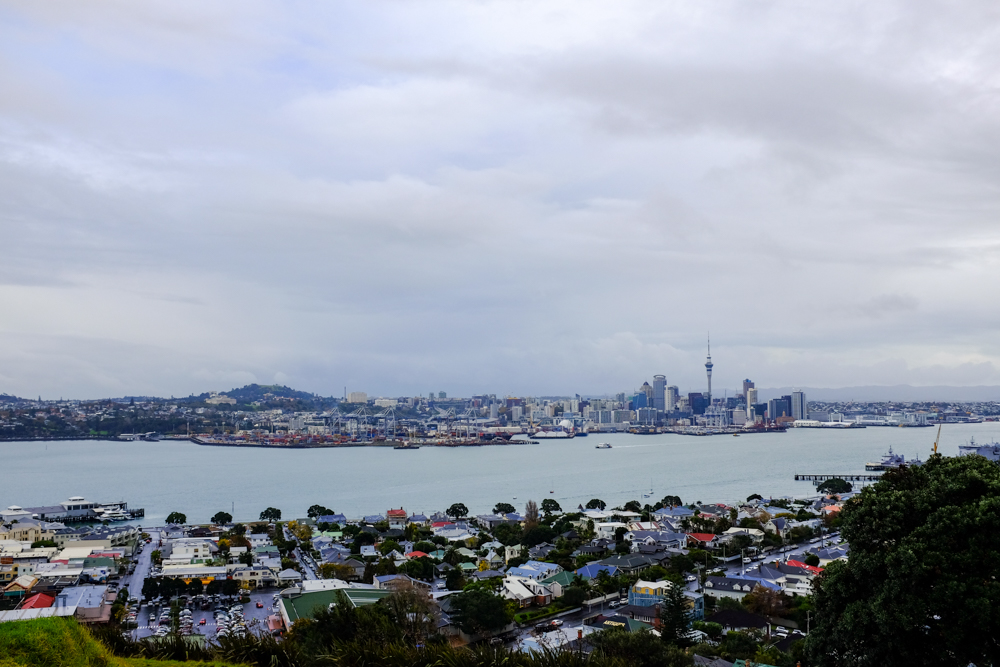 The Auckland Central Business District (known as "the CBD") is the financial hub of New Zealand.

While I found that it wasn’t necessary to purchase New Zealand currency prior to my trip, I recommend having some cash on hand to pay for smaller meals and items. Most Kiwis use chip-enabled cards, which we’re slowly getting in the States, but you’ll want to watch out for foreign transaction and currency conversion fees if you get swipe-happy.

The U.S. dollar has been favorable against the kiwi in recent weeks, trading at around $1.45 New Zealand dollars.

New Zealand is squarely in the Southern Hemisphere, about 900 miles east of Australia in the Tasman Sea, which means its seasons are flipped from what we experience north of the equator. Summer for us means that it’s winter for them and vice versa. As of this blog, it’s fall in Auckland, making it a beautiful time to visit if you’re into mellow autumn hues of changing leaves and an occasional downpour. Highs were in the 60s (in Fahrenheit) and lows got down to the 50s. 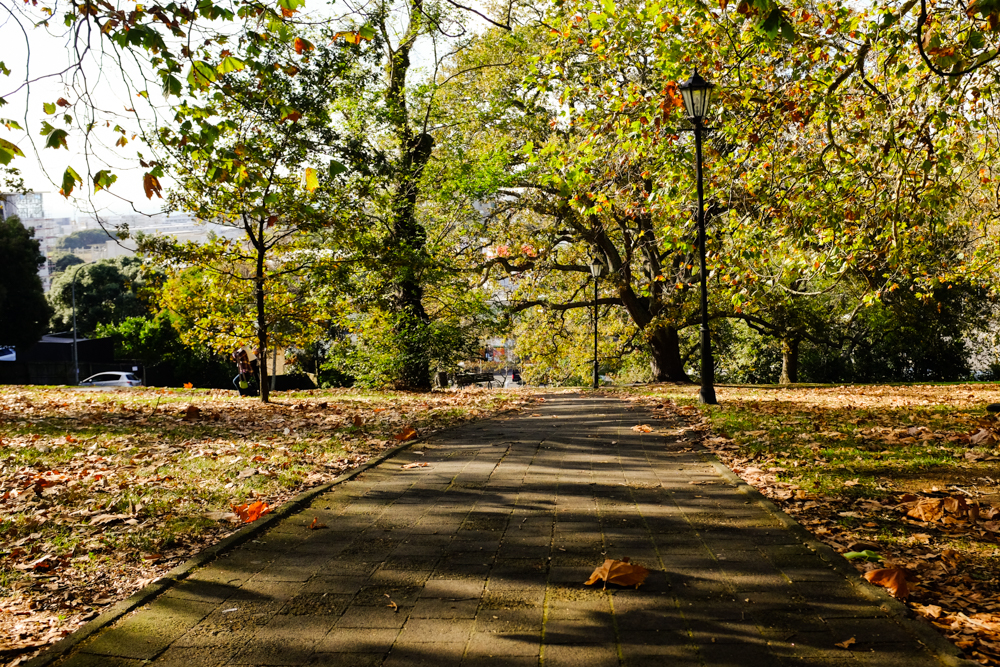 Planning ahead, I packed a thicker jacket (that in the end took up valuable omiyage space), jeans, hiking sneakers and a rain shell. Layers are key because you’ll be stripping them off as the day goes by, only to add them back on at night. Most days were wet, so the best piece of clothing I had was my water-resistant rain shell. If you don’t have a good rain jacket, there’s no shortage of outdoor gear shops in the Auckland area. 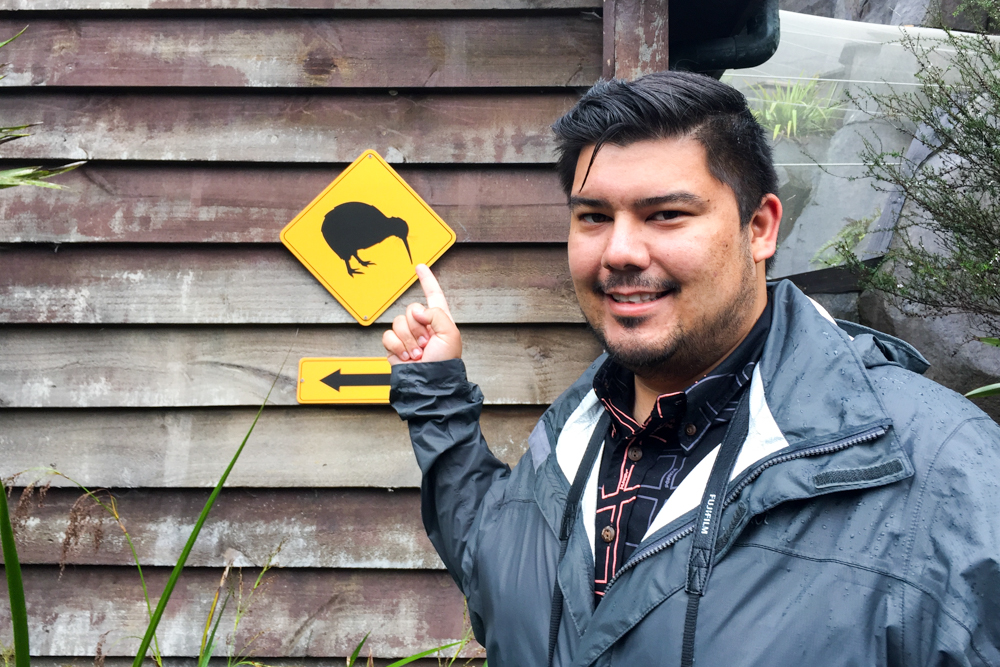 If you plan on bringing your electronics, make absolutely sure you have a travel adapter. New Zealand, like Australia, uses the V-shaped prong 230/240v plug. I picked mine up from Target for $24 and it has three outlets and a USB outlet so I was able to charge two iPhones, my Apple Watch and camera all at once.

Inner city neighborhoods are small and easily reached by public transit or foot but if you’re itching to get out of the city – like I did – renting a car is necessary. I rented a fully loaded SUV from Budget for about $52 NZD or $36 USD a day and found it to be plenty comfortable for longer highway trips out of the city. The perceived safety of a higher ride height and the SUV’s driver assistance technology also eased me into driving on the opposite side of the road – something I had never done before aside from in the zipperlane to the airport. 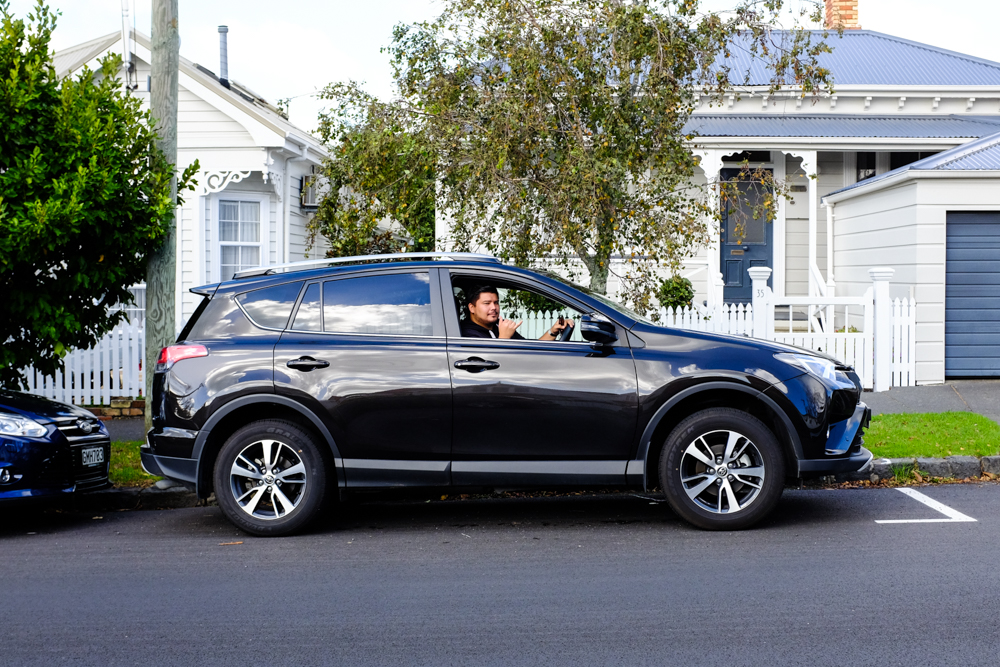 Imagine parallel parking a new car from the passenger seat on the opposite side the road. Trust me, it’s harder than it sounds.

If you’ve never driven a right-hand drive car or on the left side of the road, I recommend doing it at least once in your life. Driving in the city was stressful, but once I got to the open road all was good. Except for those dang roundabouts. Those are just unnerving. 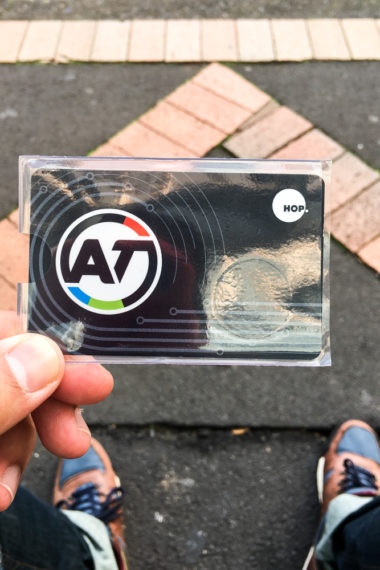 If you’re staying in Auckland, I recommend picking up an Auckland Transit HOP card ($10 NZD / $7 USD + fare) at the Britomart Transport Centre. This is your ticket to get on buses, trains, ferries and even the super convenient SkyBus airport shuttle. I stayed at an Airbnb just outside the CBD along a major bus route so I used my HOP card extensively. Each bus ride ranges from $1.60 NZD / $1.10 USD for an inner city destination to $16 NZD / $11 for a trip to the airport on the SkyBus. But no matter the fare, just remember to tag off and say “Thanks driver,” like a true polite Kiwi.

As in any sensible city, Uber is widely used and available around Auckland. Drivers are friendly for the most part and they’re eager to make conversation, especially if you’re “from the States.” I caught a 30-minute ride from the airport to my first Airbnb rental in the Viaduct Harbour area for about $38 NZD / $26 USD. All of my other rides across town were less than $6 NZD / $4.50 USD, making Uber a great option for getting to trendy areas like Ponsonby and Karangahape Road (K’ Road) in a pinch.

Since I was in the City of Sails, I couldn’t pass up riding one of the hundreds of ferries that crisscross Waitemata Harbour and you shouldn’t either! Whether you’re going across the way to Devonport or all the way out to Waiheke Island, a short trip on the ferry is a fabulous way to see the Auckland skyline and get out of the city for the day to taste some of New Zealand’s finest wines. 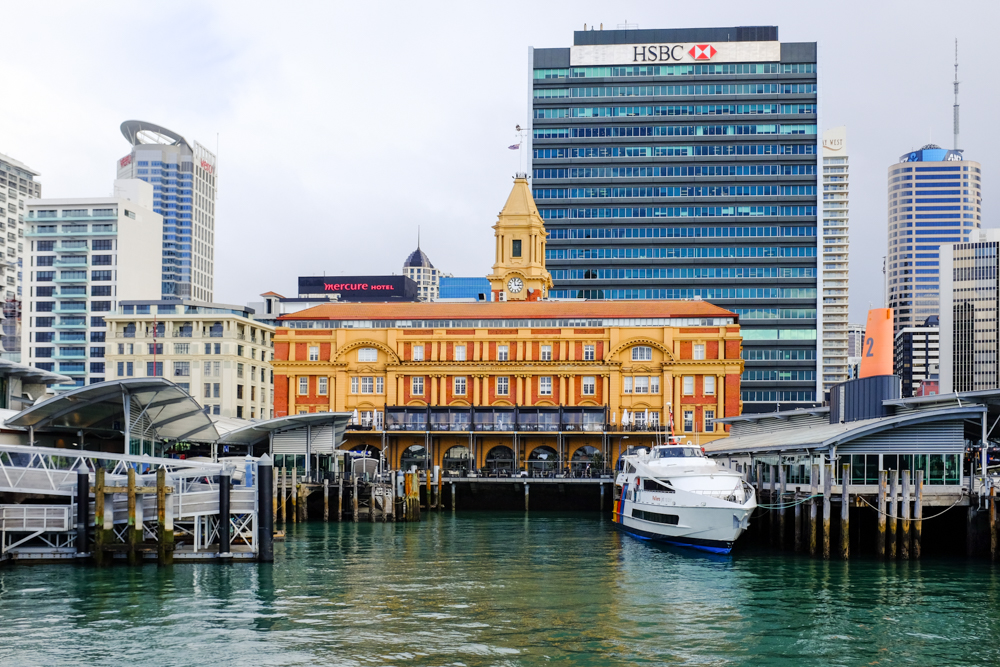 The Auckland Ferry Terminal was completed in 1912 and connects mainland Auckland with many islands of the Hauraki Gulf, including Waiheke Island known for its vineyards and beaches.

Using your AT HOP card, just head to Queens Wharf and tag on at the gate for $4.50 NZD / $3 USD to Devonport, which is often compared to Sausalito in the San Francisco Bay Area due to its proximity to Auckland and ease of access via ferry.

If you’re like me and have T-Mobile, you’re in luck! T-Mobile’s Simple Choice data plans include international 3G data roaming and texting so you can text and Snapchat your way through New Zealand with some ease. My iPhone 6S Plus caught the Vodafone NZ signal, but browsing websites and data-rich applications ate up my battery life if I wasn’t connected to a strong WiFi hotspot. Otherwise I could hail an Uber, check my texts and post to Instagram just fine. Free WiFi is advertised around the city and in many cafes, but in most cases you’ll be limited to 50MB of data or a 30-minute session – they’re just trying to tell you to get outdoors and enjoy life away from the screen in your pocket! 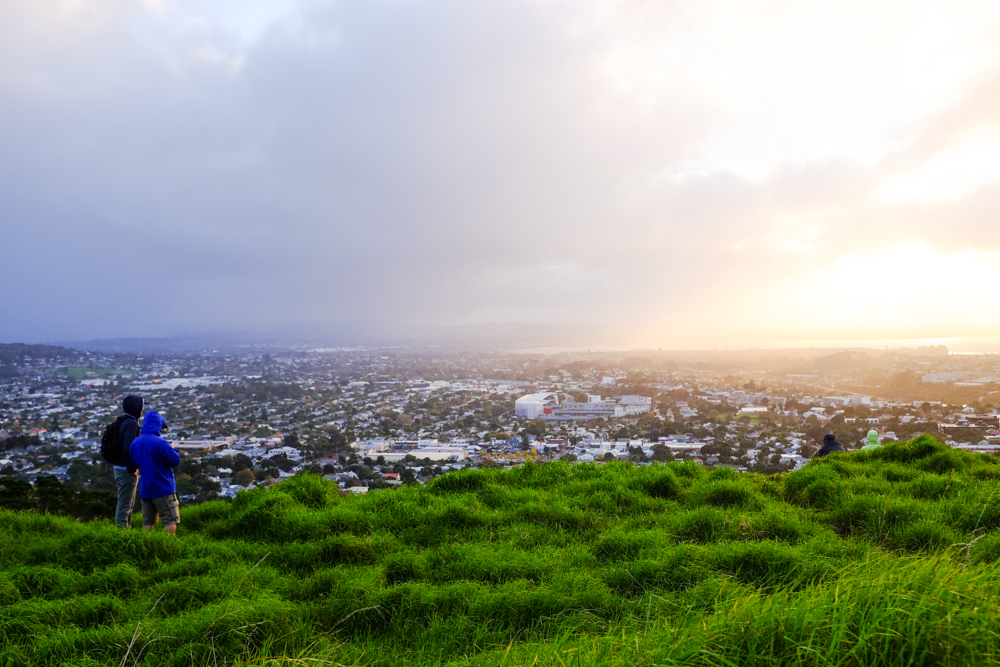 If you got off your phone, you would have noticed this gorgeous sunset over the city.

If you’re with any other carrier or prefer a better connection, you can pick up a travel SIM at the airport for $50 NZD / $34 USD that’s loaded with data, talk and text.

Passport? Check. Tickets? Check. Sense of adventure? Check. Sounds like you’re ready to get lost in kiwiland! Up next is Kia ora Auckland: Where to eat.