I’d been wanting to try the hidden sushi bar at Natsunoya Tea House since Garrett Wong (now of Sushi Ii) was there. I knew it was tiny and had its regulars, but somehow never had the time to think about making my reservations a month in advance.

The first time I actually saw it last year, I was at a party in the main hall. I poked my head in through the noren (doorway curtains) and the regulars turned and shooed me out, saying, “Don’t eat here. Junk.” You know that meant I had to try it! 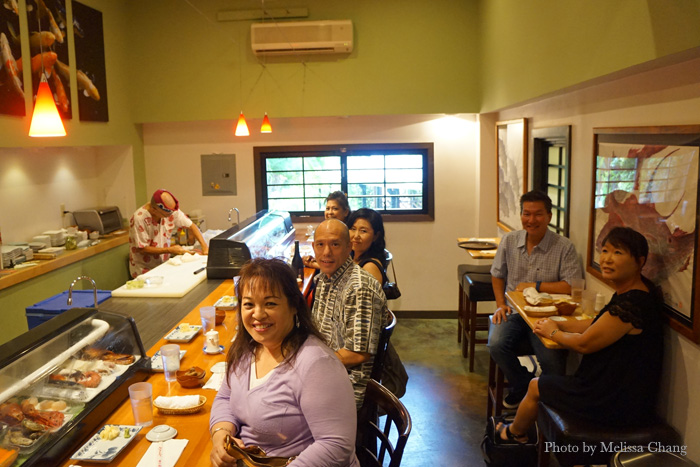 I finally got to go recently with my classmates, many of whom are now foodies and into sake. It was a large group — eight people — and we found  out after the fact that they don’t let all of you sit at the bar. They said they need to leave seats open for other customers, and a party of our size overwhelms the sushi chef, Sho-San. If you go, the best size party is two; try not to have more than four. (There are a total of 12 seats at the bar and two, two-tops. Large parties can also opt to get a private room upstairs, but that’s probably no fun.) 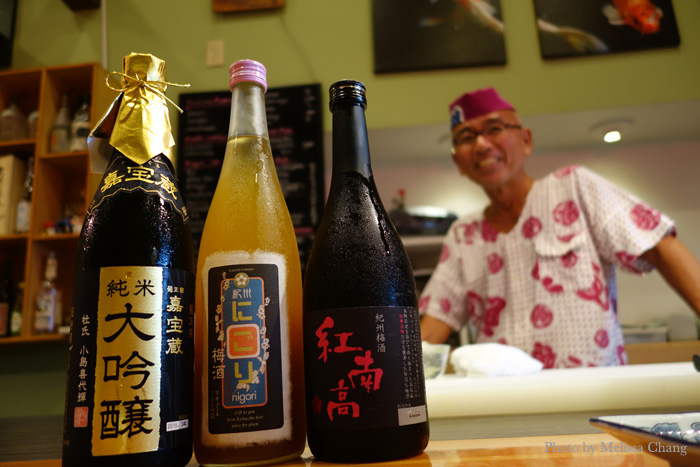 Sho-san is all smiles before service begins. I brought my sweet sake from Nakano in Wakayama.

One of the big draws for the Natsunoya sushi bar is that it is BYOB. They’ll help you put your bottles in ice and provide glasses. Sho-san had worked as a freelance sushi chef for about 10 years, doing more catering jobs, before landing this gig four years ago. 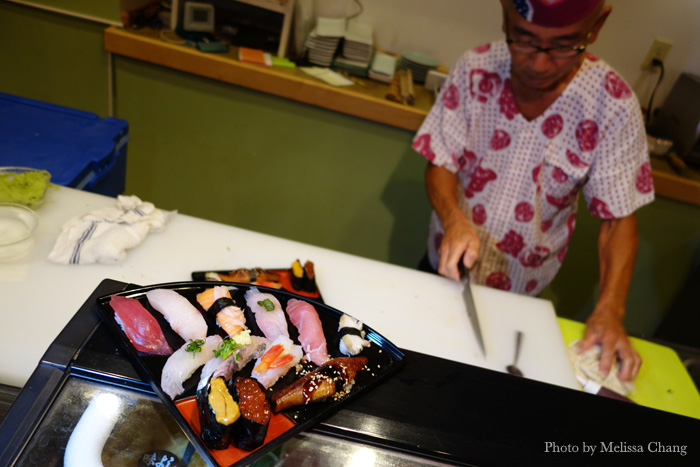 FYI we think this is what the sushi omakase is supposed to look like.

We found out later why Sho-san doesn’t like large parties. He wants to serve everyone at once, and that’s hard to do with too many people. This is what the omakase sushi combo ($36) is supposed to look like. 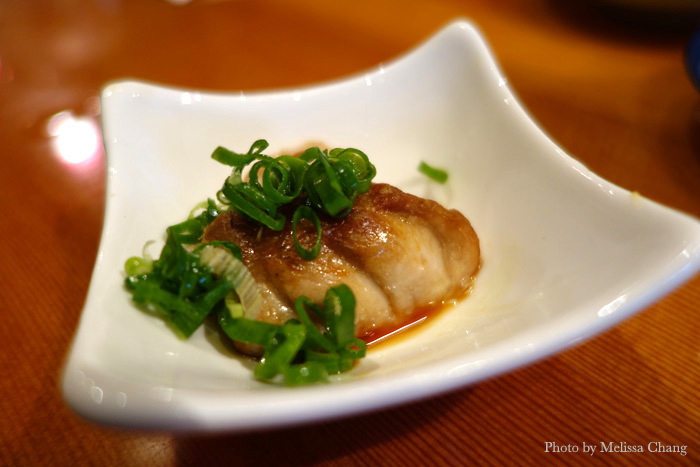 To start: A bite of seared ahi.

You get a different starter each time, I think. This was a nice intro to a delicious meal. 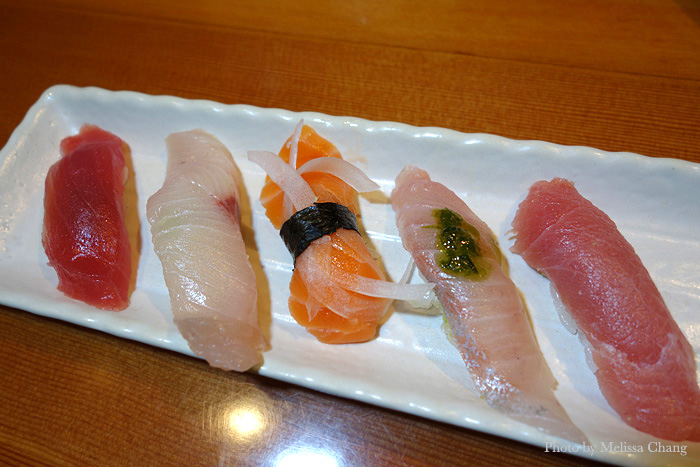 The first set of nigiri to the group.

To accommodate our group, our omakase sushi combo was served in segments. This first batch included maguro, hamachi, salmon, local fish with homemade “pesto” (with herbs from the garden) and chutoro. These melted in our mouths! We were also fascinated at the size of the rice underneath, which was super tiny. 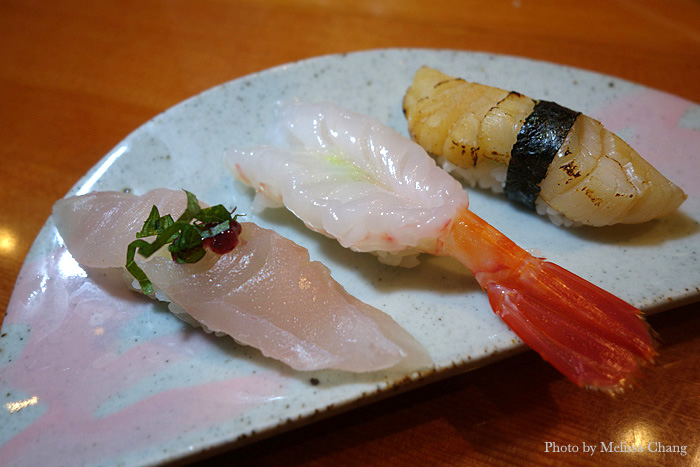 Second set of nigiri to the group. 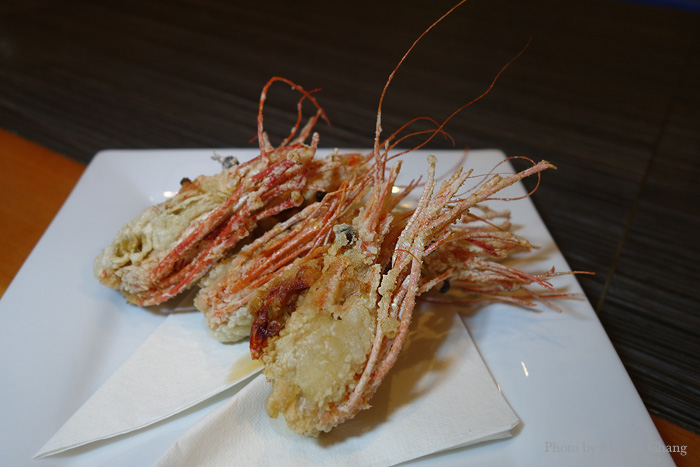 Remember the Molokai amaebi? These are their heads.

The amaebi heads. These were fried so well, I could eat the whole thing. Sometimes that’s hard to do. 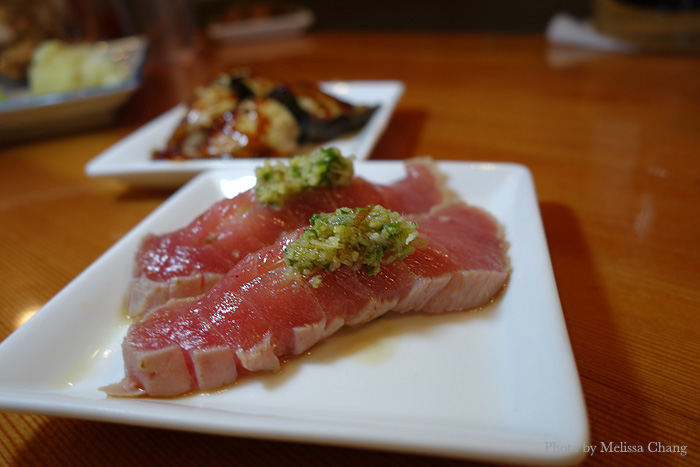 The seared ahi with garlic-ginger topping was so good! The topping isn’t overwhelming but adds nice flavor to the sushi. 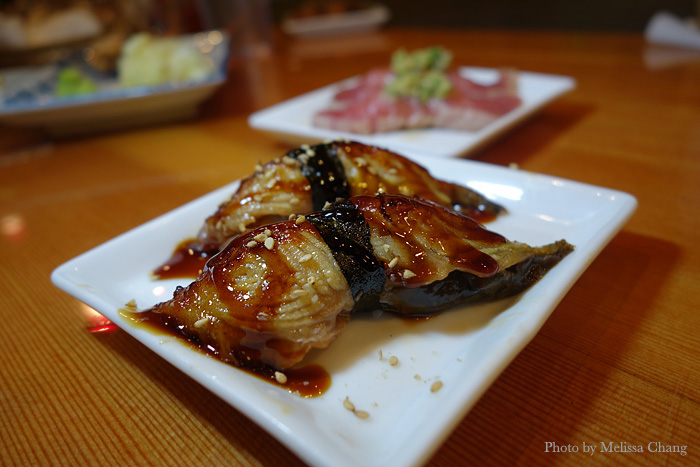 The unagi melted in my mouth, so I knew it was good quality. 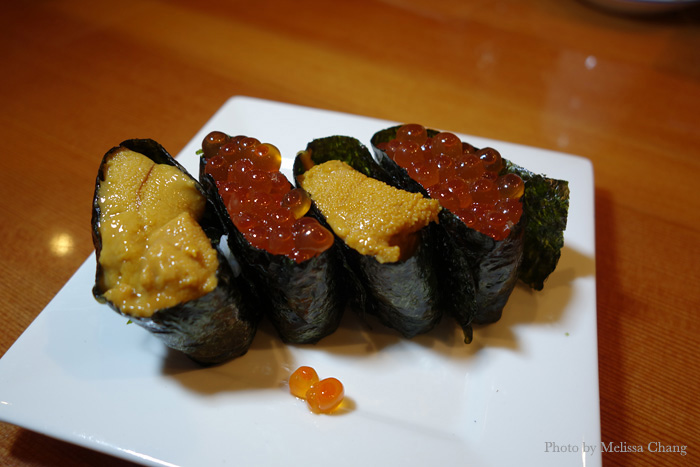 This signaled the end of the omakase, but we didn’t know it.

This plate signified the end of the meal, but there was no announcement, which was a little strange. But we later realized Sho-san was starting to get overwhelmed as the seats around us filled. Was it good, though? Hell yeah. 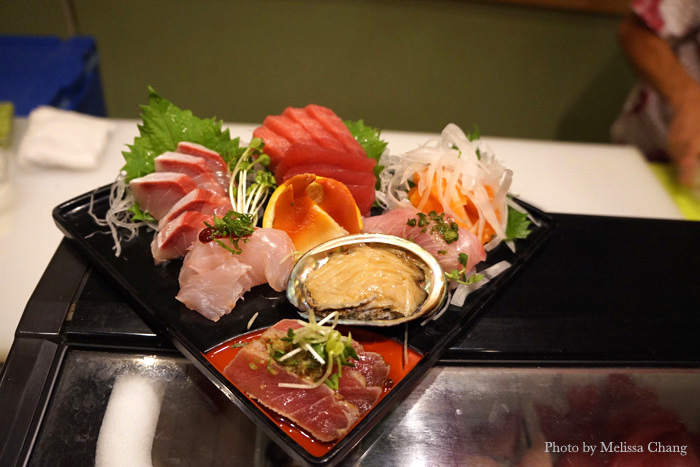 This is what the sashimi combo omakase looks like. When I go back, I’ll probably get a sushi combo, then split this with someone. What a deal, right? 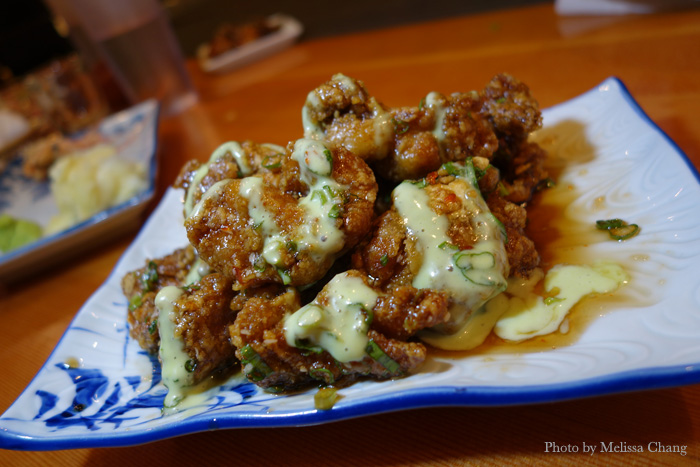 I wasn’t a big fan of the cooked food — if you’re hungry, it’s okay to order to fill you up, but it’s not nearly as good as the sushi. This is the chicken karaage with (what we think was) a wasabi aioli sauce drizzled over. 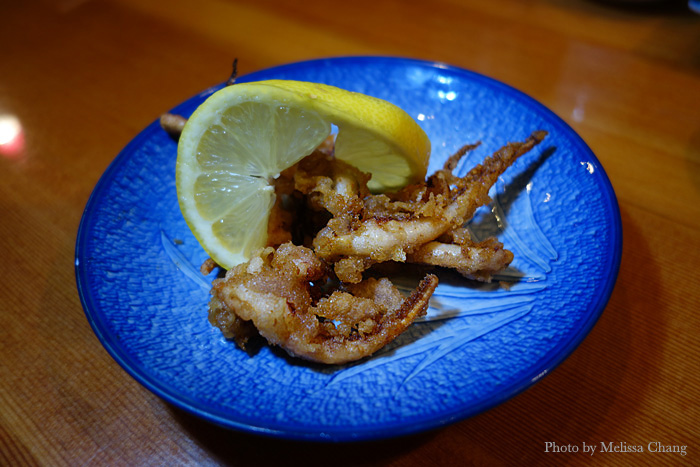 Geso karaage. I didn’t try this, but took a photo to show you. 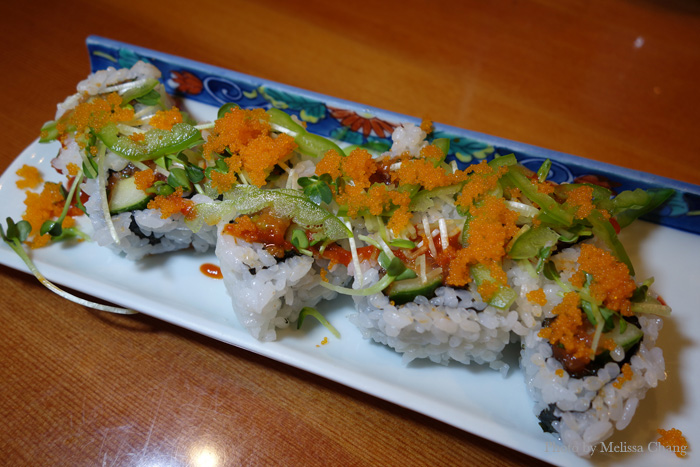 Melanie didn’t order omakase but had a spicy sushi roll comprised of ahi, salmon and hamachi and topped with tobiko, peppers, sprouts and spicy sauce. 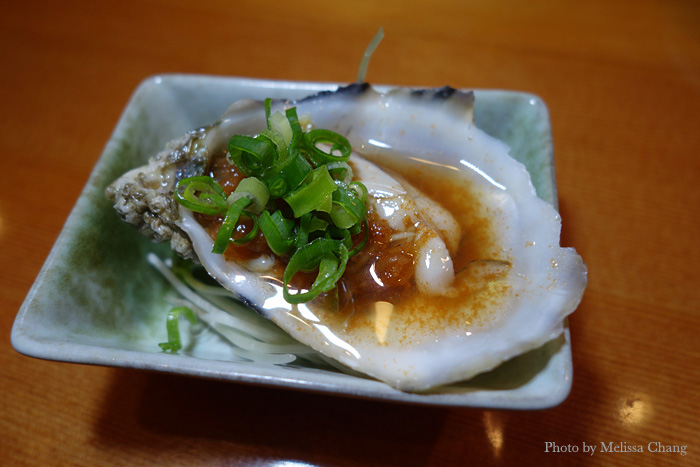 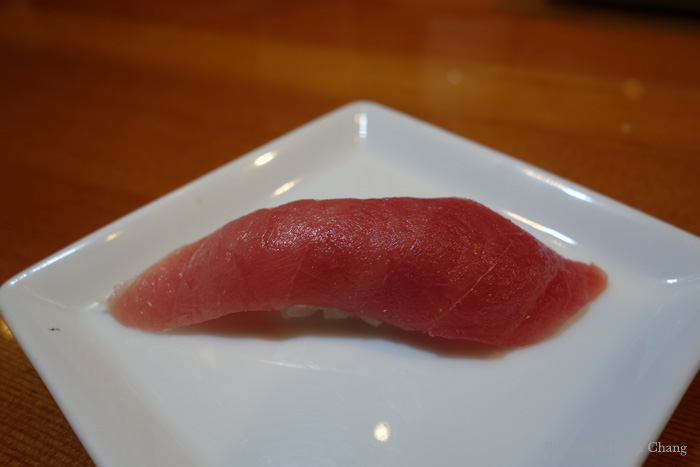 I ordered a chutoro ala carte, and was surprised that it looked different from the omakase. Sho-san said it was a different cut. Still melty! 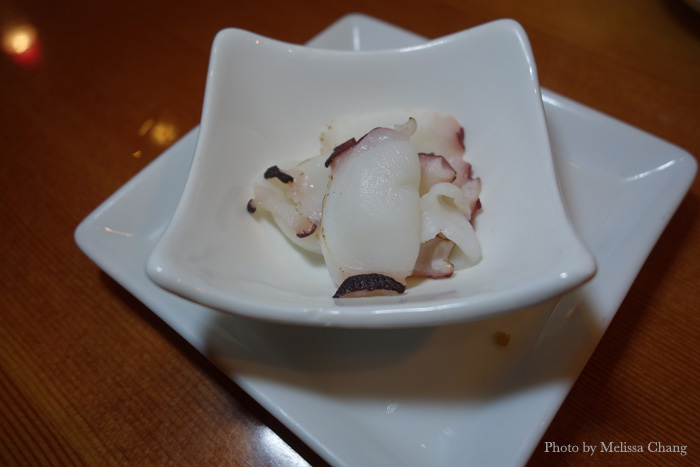 At the end, as we were talking story, Sho-san happened to have some extra tako from another order so he made a sample plate for us to try. It’s fresh Kaneohe tako, lightly torched on the spot. I would order it again as it’s very delicate and tender, and the torching brings out the salt in a subtle way. 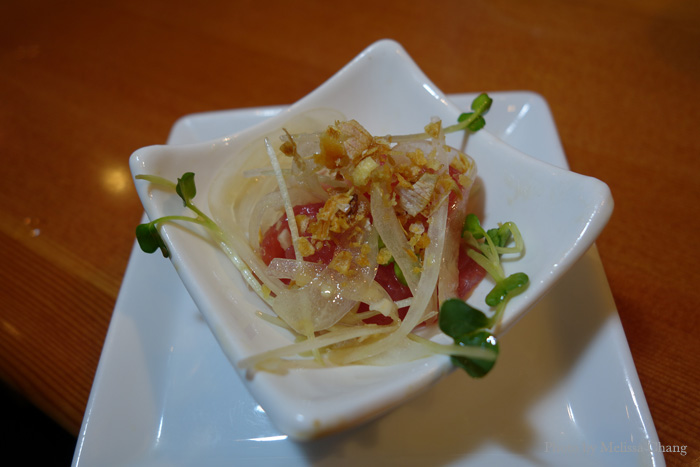 He made us poke on the spot.

Sho-san also had some extra maguro so he made us some poke on the spot with onions, sprouts, and dehydrated onion for some crunch. This was probably some of the best poke I’ve ever had, and I’m salivating again as I write this. It’s that good!

At $36 for a fresh sushi dinner, especially BYOB, I would say this is one of the better deals in town for sushi lovers. Tips: Make your reservations well in advance, go in a small party no larger than four, and get an early seating. The parking lot may fill up, since the main tea house is servicing large parties, and you may be turned away by the valet.