Dream “A Midsummer Night’s Dream” when Hawaii Opera Theatre (HOT), Hawaii’s only opera company, brings it to life this month. As part of HOT’s “Things Are Not As They Seem” 2015-2016 Opera Season, they’re featuring Benjamin Britten’s inventive interpretation of Shakespeare’s comic play as their next production starting Friday, February 12. 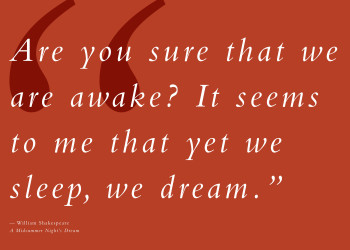 “A Midsummer Night’s Dream” brings three fantasy realms of fairies, nobility, and working class characters of a mythical Athens and an enchanted forest together. Madness ensues throughout the realms when the Fairy King, Oberon, introduces a magical flower to the land and unlikely romances begin to blossom amongst the characters. This fanciful production will be led by maestro William Lacey and award-winning artistic director, Henry Akina, celebrating his twentieth year with HOT.

HOT’s previous productions have brought some of the most talented opera singers to Hawaii from around the world and “A Midsummer Night’s Dream” is no different. Seven artists are making their Hawaii debuts, including Paul T. Mitri as mischievous Puck, Anne-Carolyn Bird as Fairy Queen Tytania, and Daniel Bubeck as Oberon. The cast also hosts many returning HOT favorites like Kyle Erdos-Knapp, who played Toby in HOT’s production of “Sweeney Todd,” and singer Jamie Offenbach, who played the Mikado in “The Mikado” and The Bonze in “Madam Butterfly.”

Win tickets to the show

We’re giving away two pairs of tickets to the opening performance of HOT’s “A Midsummer Night’s Dream” on Friday, February 12, 8 p.m. at the Blaisdell Concert Hall. To enter our giveaway, just fill out the form below to sign up for our Frolic Hawaii newsletter. Even if you’re already a subscriber, you can still fill out the form to enter the giveaway. The giveaway ends at 4 p.m. on Friday, February 5, 2016. We’ll be randomly selecting two winners, who will be contacted via email.

You can also find more information and tickets to HOT’s February 12, 14, and 16 performances online at HawaiiOpera.org or from the HOT Box Office by calling (808) 596-7858. Tickets start at $34, with discounts available for groups, military, and students through the HOT Box Office.