I don’t usually post bad news in my blog, but this one is a little different. I had just uploaded photos for an upcoming post, where my friend Pam Davis and I went out to Laie to visit various people — among them, longtime restaurant manager David Nagaishi. Then Pam sent me the news: I’m sorry to say, he passed away that Sunday night after having a heart attack the day before.

I actually held off on posting this right away because I didn’t want it to be part of a social media spectacle like when we lost Ryan Suenaga. I don’t need to be the first to post about this; it’s just a post to remember someone who was a major part of Hawaii’s restaurant scene for decades.

If you have been in or around the restaurant business for the last 40 years or so, you probably were touched by David in some way or another — as a server, a customer, a chef, or just an industry peer. He was one of the most recognizable and popular restaurant managers in Hawaii, having managed places like Nick’s Fishmarket, the Black Orchid, the Bali Room, Don Ho’s, Il Lupino, Ocean House, and Mariposa. 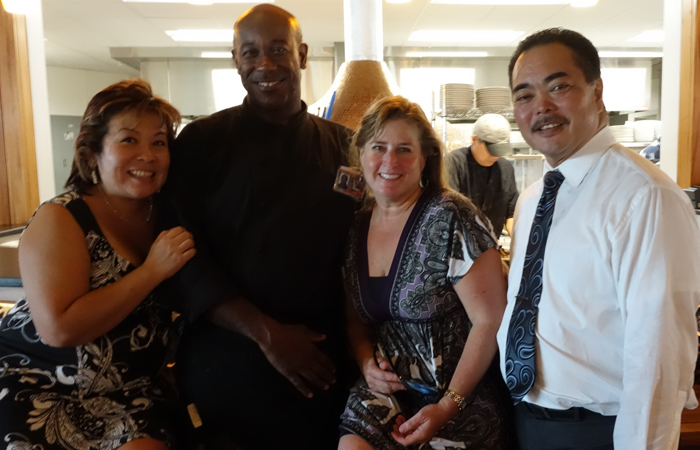 With Sean Priester, Pam Davis, and David Nagaishi at Pounders.

His most recent stint was at Pounders Restaurant in the Polynesian Cultural Center’s Hukilau Marketplace, where we visited him a couple of weeks ago. Chef Sean Priester told us that Pounders was David’s dream job, since he was a Latter-Day Saint, and his work style was a perfect fit for the company’s corporate culture.

I had known who he was for many years, but didn’t get to actually work with him until a few years ago when he was managing the Ocean House, since the Outrigger Reef is one of our clients. He was obviously a seasoned pro, as he was quick with his assessments and recommendations on what the restaurant needed or what had to be done. I don’t know if it was easy for him, but he made things easier for those around him to do their jobs.  It wasn’t just his professionalism, but his extensive knowledge and expertise, that made David one of the most sought-after restaurant managers in town.

You can see other people’s tributes and information on his service on his Facebook page, here. His service will be on October 7 at The Church of Jesus Christ of Latter-day Saints Kalihi Stake Center, 1723 Beckley St. Parking is available at Farrington High School across the street. Viewing is 7 to 10 a.m., service 10 to 11 a.m., and burial immediately to follow at noon at Valley of the Temples in Kaneohe.

A hui hou, David, until we meet again.

Not your typical Valentine’s dinners