One of the biggest misperceptions that people have about Iceland is that it’s a small place because it’s an island. Nothing could be further from the truth. I know it sounds a little scary and humbug to not have a home base, but you should plan to keep moving every day or two after your initial couple days in Reykjavik.

Everyone said we had to see an ice cave while there, but they’re in very remote places, and you aren’t allowed to access them without a guide. (Actually, you probably could, but good luck trying to find it on your own as you hike through the snow for three days.) Every tour company we looked at started at Jökusárlón glacier lagoon, which is a four and a half hour drive from Reykjavik. The tours last anywhere from a couple of hours to a couple of days, and then you have to drive four and a half hours back. 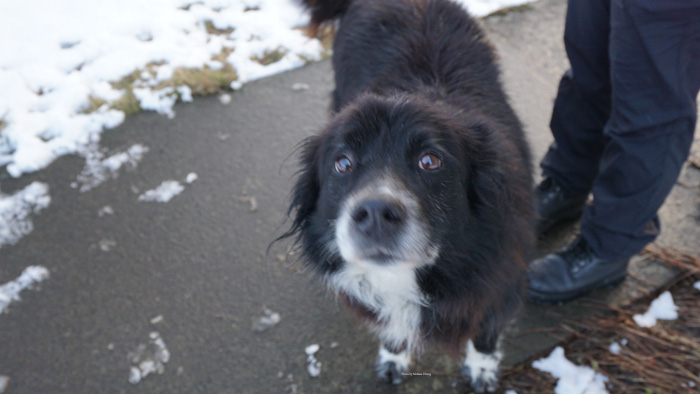 Farm dog Galdur (Icelandic for “magic”) greeted us at our AirBnB.

Since we were short on time, we spent the night at an AirBnB in Eyjafjallajökull, the area of an historically active volcano — just two and a half hours from Reykjavik. Once you leave the city, the driving is super easy and there’s no traffic. 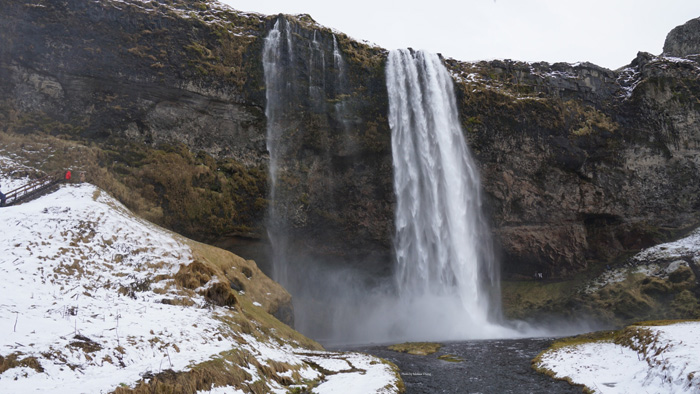 Skógafoss! Those red and white dots are people’s jackets, which shows you how huge the waterfall is.

On our way there, we could see a huge waterfall in the distance, so we took a detour to check it out. Turns out it’s Skógafoss, one of the biggest waterfalls in the country at 82 feet wide and a 200-foot drop. According to legend, the first Viking settler in the area, Þrasi Þórólfsson, buried a treasure in a cave behind the waterfall. You can climb the muddy stairs to view the falls on the left, and hike further to walk behind it, but be prepared to get soaking wet.

Our night in the AirBnB wasn’t remarkable, but we did get free breakfast, which was a bonus since all food in Iceland seems to be outrageously expensive. If you prefer nicer accommodations, look into the Foss Hotel chain, which seems to have locations along this route to Jökusárlón and seemed to be competitively priced. (I would probably do this if I go again.)

We got a late start and had to be at Jökusárlón by 11:30 a.m., but our GPS said we wouldn’t get there until 12:15. What?! Never fear, Deb is a California driver and Iceland roads are fairly deserted. We got there on time by speeding to the glacier lagoon and once in a while passing the chumps doing 50 miles an hour. I’m not telling you to do what we did, I’m just telling you it’s possible.

It was an unusually nice day in the south coast, and our guide was dumbfounded that we were also lucky there weren’t many groups in the cave. On this day, our group had the cave to ourselves for about half an hour, only overlapping with a group at the beginning and at the end. Usually, there are several groups in the cave at once and everyone is jostling for photos. Here are some of mine: 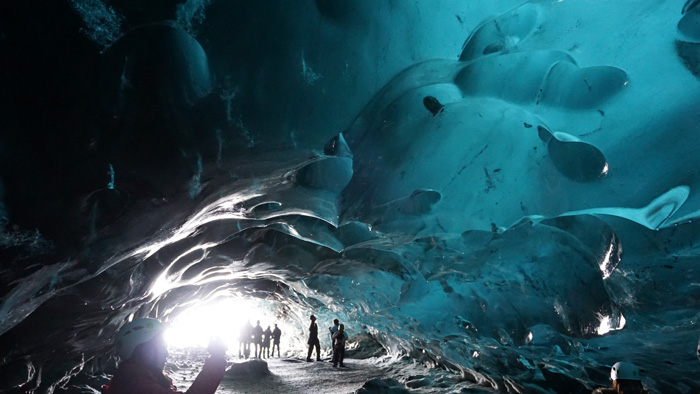 This was taken inside the cave, looking back at the entrance. 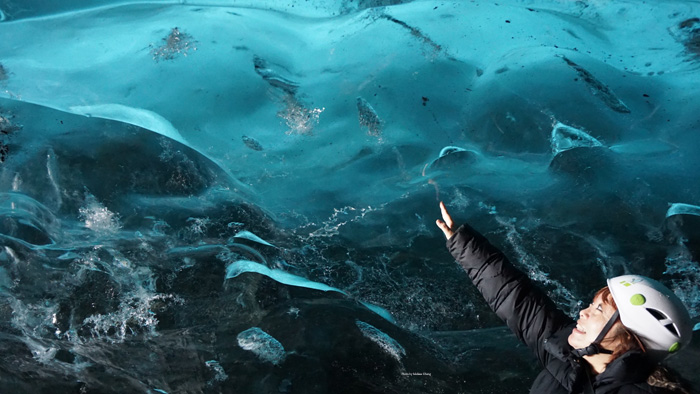 It’s like an underwater world! I was hoping to see fish or plants in the ice, but there weren’t any. 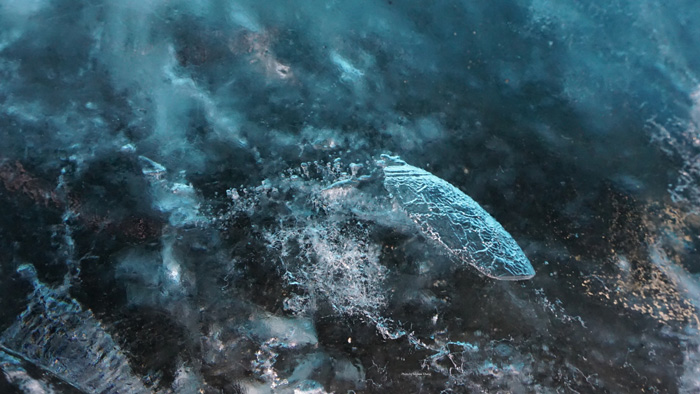 It’s so cold in Iceland that water freezes pretty quickly. We saw a few bubbles like these, frozen in mid-rise. 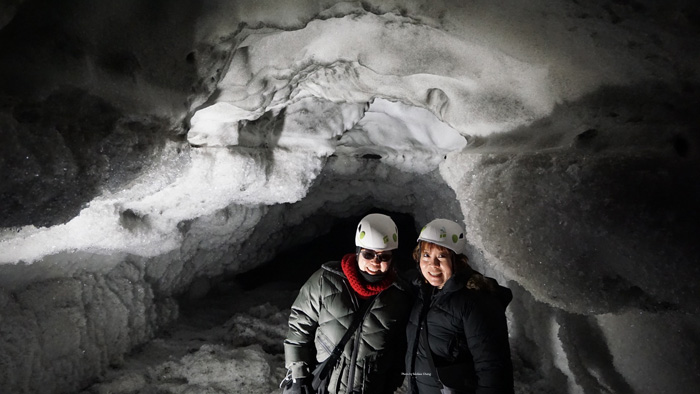 Deb and I hit the end of the cave — at least, the part that was safe. When the ice melts in the summer, the water comes out in such great force that it defies gravity and flows upward through this cave. 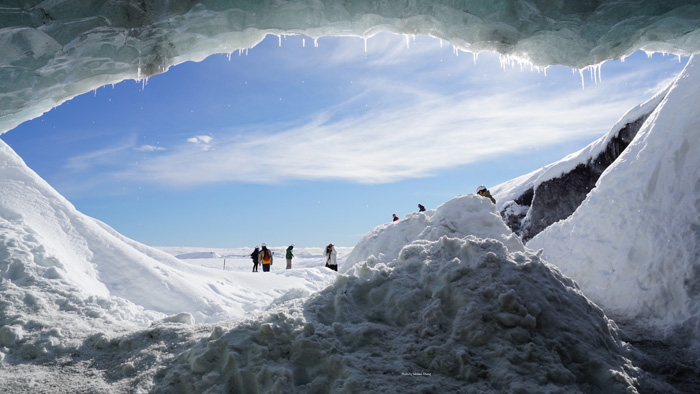 And the mouth of the cave as we left. I saw a hole that my sister in law had climbed through two weeks earlier, and as I got close to it, a park ranger shooed me away. Ha!

Since it was an unusually nice day, our guide asked the driver to stop at this point overlooking the lake, which he never gets to do. 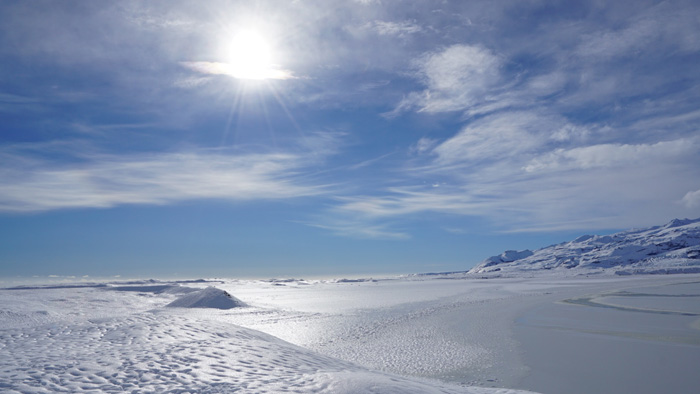 In the summer, this Cool Whip wonderland is flooded, and the guides switch from cave tours to water and fishing tours. 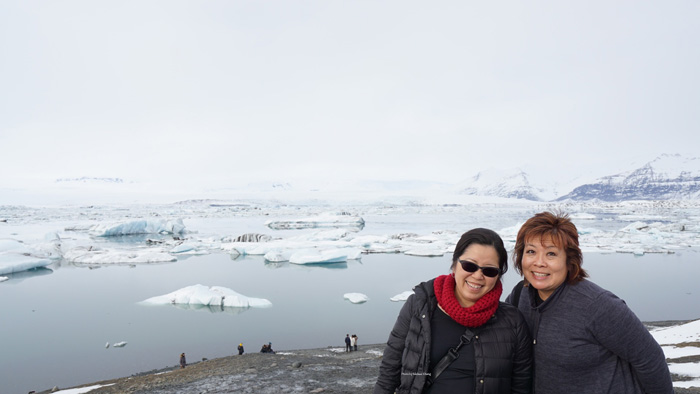 The meeting point for all tours is the glacier lagoon, so be sure to make time to explore the area before or after your tour. Most people are civilized and will be taking photos like this. 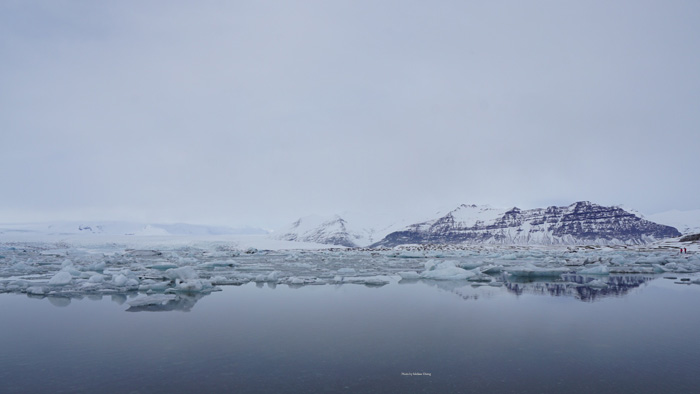 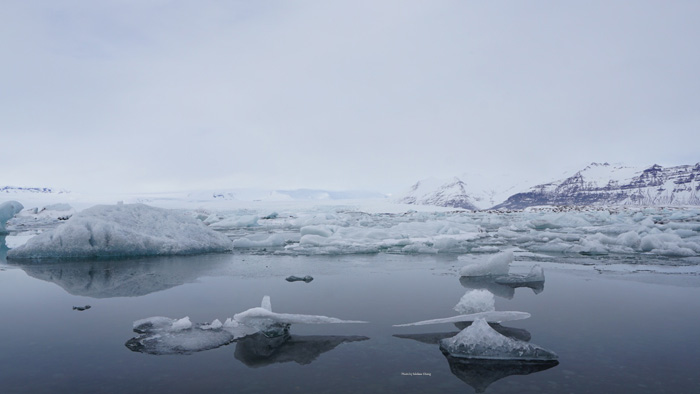 And then there are the ugly tourists (from all countries), who will be throwing large rocks at the ice formations or balancing on ice cubes for the ultimate selfie. 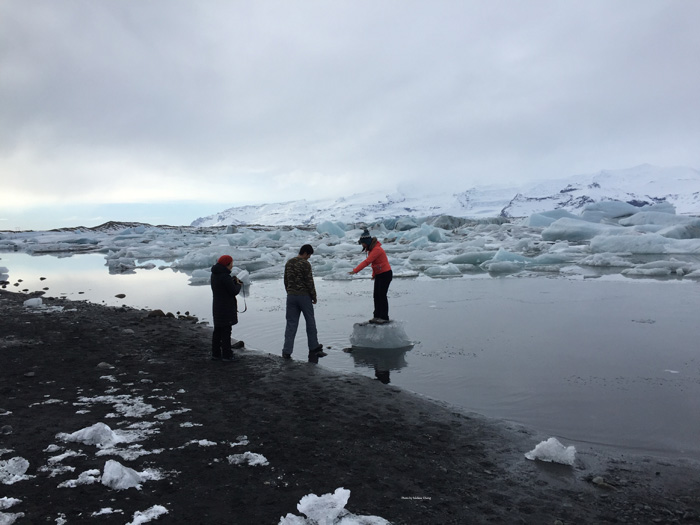 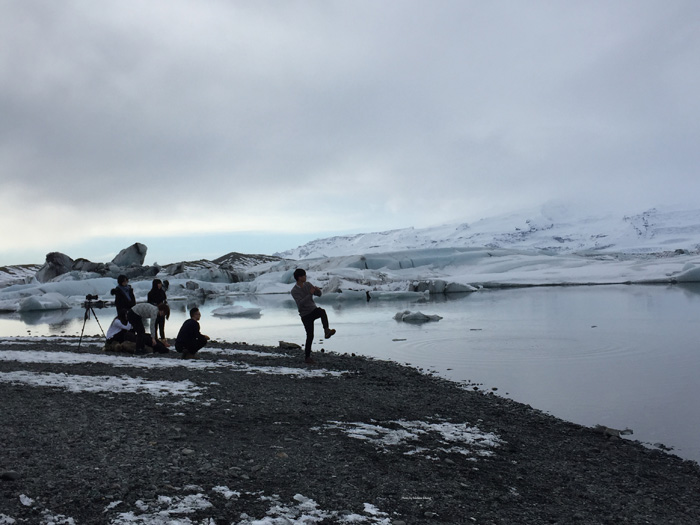 TIP: Most people put the fear of God in us and said we needed to wear rain pants or snow pants here. My sister-in-law, who had been here two weeks prior, said that all I needed was Uniqlo thermal underwear under hiking pants (like fancy leggings) and she was right. There are fewer nerve endings on your legs than your top, so they don’t feel as cold. 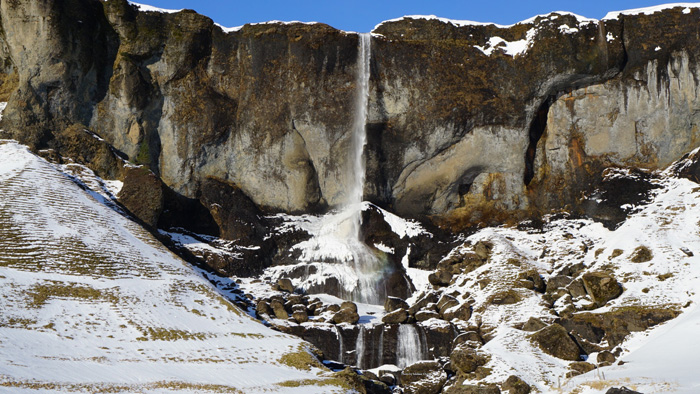 We came upon another pretty waterfall on our way home, and it was situated in someone’s back yard!

On our way back we stopped in the little town of Vik, which I understand is very scenic, but dusk was falling so we weren’t going to see much of it. I just have two tips for you as you drive through here: 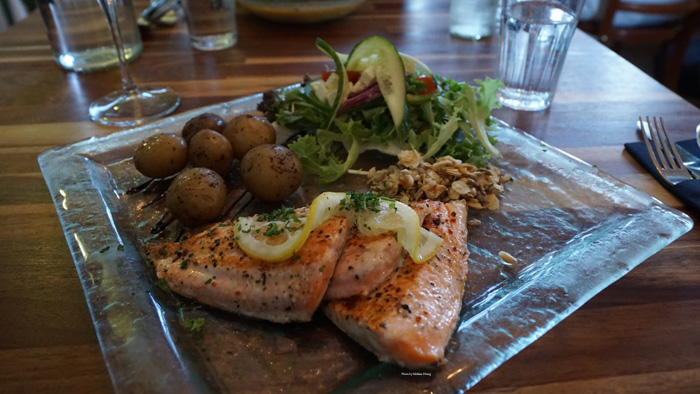 The salmon is one of the best things at Sudur-Vik.

First, you will find TripAdvisor highly recommends a restaurant called Sudur-Vik, but the place is very expensive and overrun with American tourists. The kind that may be trying to pay for their meals with American cash. If you come at a peak hour, you can expect a very long wait. They do have a nice view, though, which leads me to my second tip: 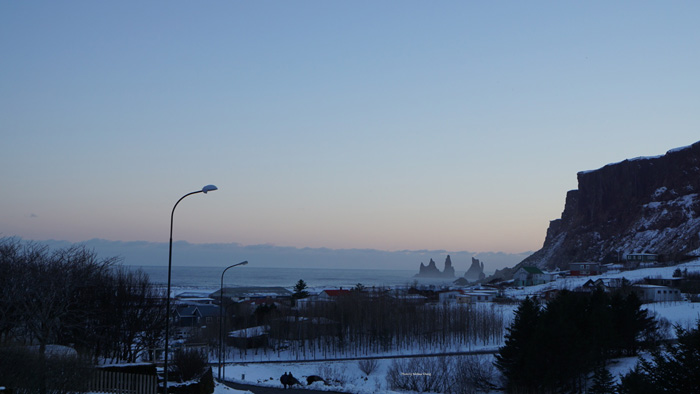 You might want to get a look at Reynisdrangar if you are in Vik during the day.

You can see these interesting rock formations: Reynisdrangar are basalt sea stacks under the mountain Reynisfjall near Vik, framed by a black sand beach that was ranked in 1991 as one of the ten most beautiful non-tropical beaches in the world. Legend says that the stacks originated when two trolls dragged a three-masted ship to land unsuccessfully and when daylight broke they became needles of rock. If the sun were still out, this probably would have been an awesome photo op.

Up next: Our favorite eats in Reykjavik. To see more from our trip, click here or check out the #AlohaIceland hashtag on Instagram.