With just four full days in Dubai — two of which were on tour — there wasn’t a lot of opportunity to try everything people recommended. Nonetheless, the flavors on this side of the world were as intense and wonderful as we expected.

You’ll probably be disappointed to see this blog post because there isn’t a huge variety — it’s mostly Lebanese. We wanted to get local Emirati fare, but found that most traditional Arab food is cooked at home, so there are few true Emirati restaurants. (They are starting to open some, though, to cater to tourists like us, so I think there are three restaurants in the city now.) I guess that means we have to go back to try it!

You’ll also be a little disappointed to see we didn’t eat out in the streets for super local fare. As mentioned in the previous post, most people go to the mall to eat. It’s air conditioned, it’s consistent and clean, the local foot traffic ensures the food is good … and malls and hotels are the only places that serve alcohol. Even Dubai PR queen Nisrine el Hajji sent me a short list of eateries to try, and half of them (as far as I could see) were in a mall.

Here’s a look at two popular spots we tried for regional food, one of which was recommended by Nisrine. Prices are in Arab Emirate Dirhams. 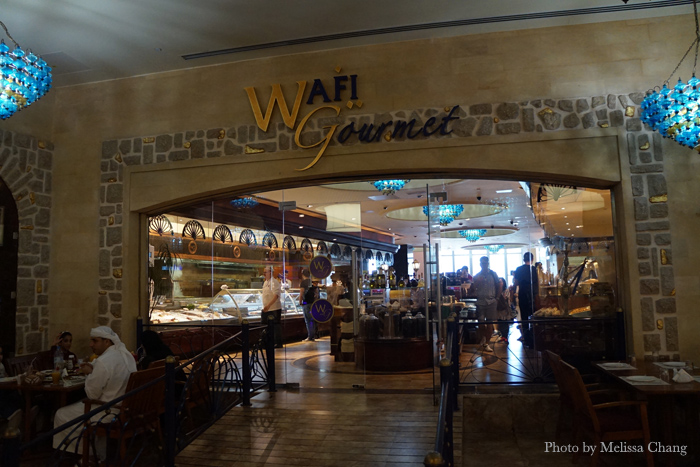 Wafi Gourmet is a one-stop shop for pretty much everything. We went there to eat, but found there were many great foodie gifts made right on site, like baklava and nougat, and snacks like olives and pastries to take on the road. 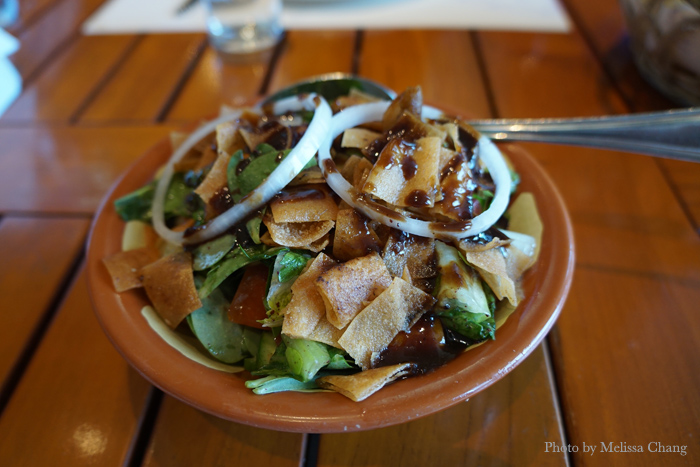 At first I was skeptical of the fattoush, which is a salad tossed with fried pita. Salad is salad, right? But at Wafi, they make a pomegranate vinaigrette, and that makes an exceptional difference in the overall flavor of the salad. It’s got the sweet-tart flavor going on, but very balanced and a little lighter due to the pomegranate. Oh, and fried bread in salad is always a good thing! 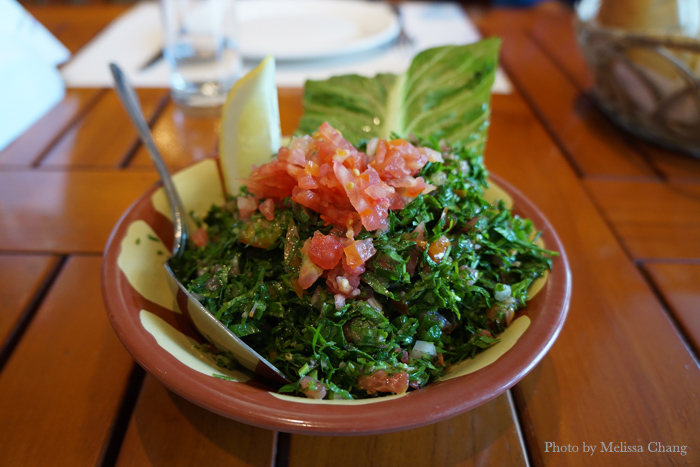 The tabbouleh here is fresh and, again, well-balanced. In the United States, usually this tastes too acidic to me. Why is it everything tastes better on the other side of the world? 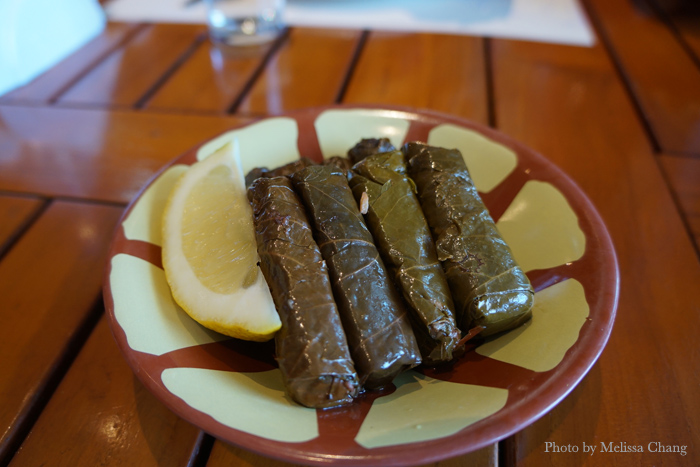 Okay, well, stuffed grape leaves pretty much tasted the same here as they do in the United States. If you like this dish at home, you’ll like it in Dubai. 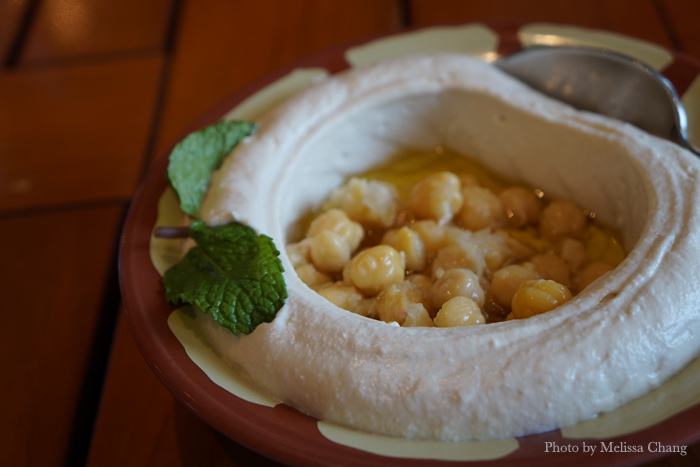 Here’s what I really liked: The hommos. I don’t know what it was, but it tasted like the real deal and I loved that it was smooth, not gritty. Some people said they preferred it gritty, though, so I guess the texture is a matter of preference. But the flavor was so much more authentic here, with the right blend of olive oil, chickpeas and seasoning. 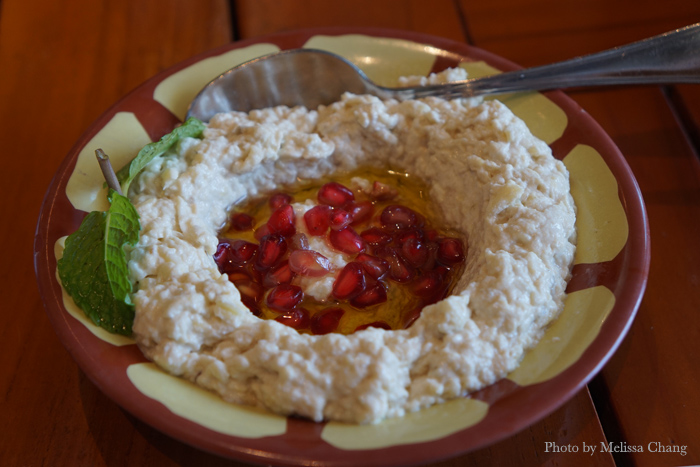 We had no idea what to expect from the moutabal, but I guess the closest description is likening to baba ganoush, which is like hommos with eggplant. They sprinkle pomegranate seeds on it, though, so it gives it a tinge of sweetness. 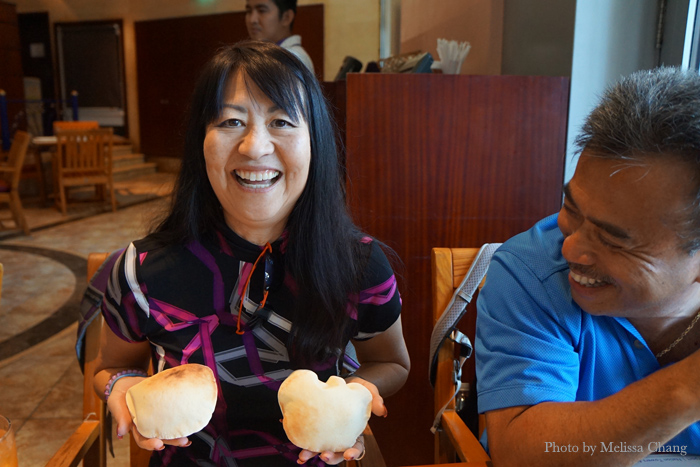 The pita served with these dips are fluffy, hollow balls of bread, not the flat pockets you usually see in the United States. If they sit out too long, they do flatten and get stale, which makes me raise an eyebrow to the crap we are eating at home.

The following three dishes are mixed kabobs, including lamb, beef, chicken and fish ranging from about 72 to 82 AEDs per plate. You can’t really tell in the photos, but the plates are huge! You could easily split this and a salad and feel very full. 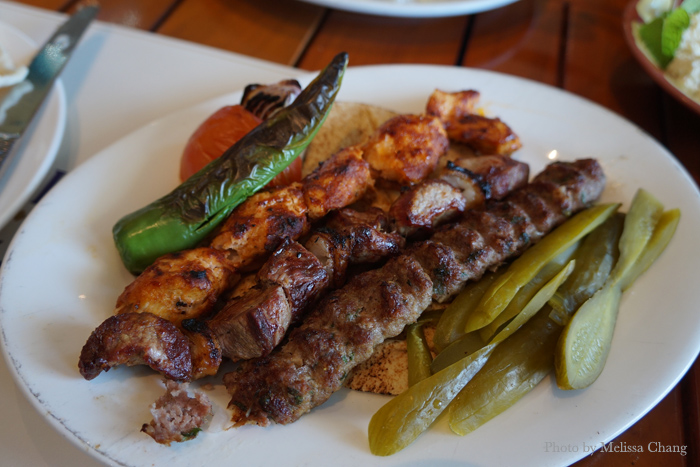 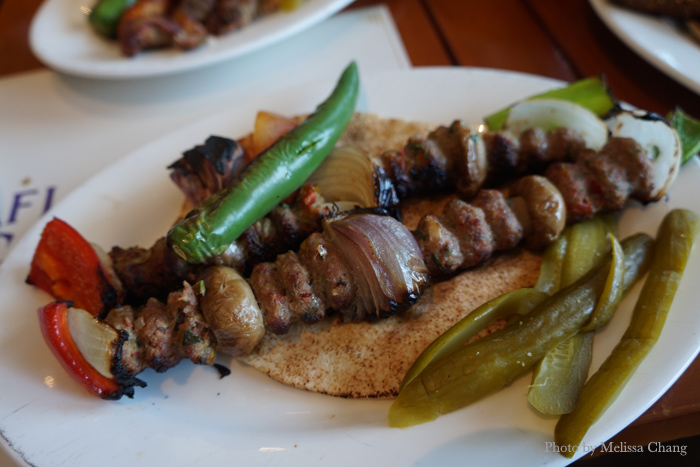 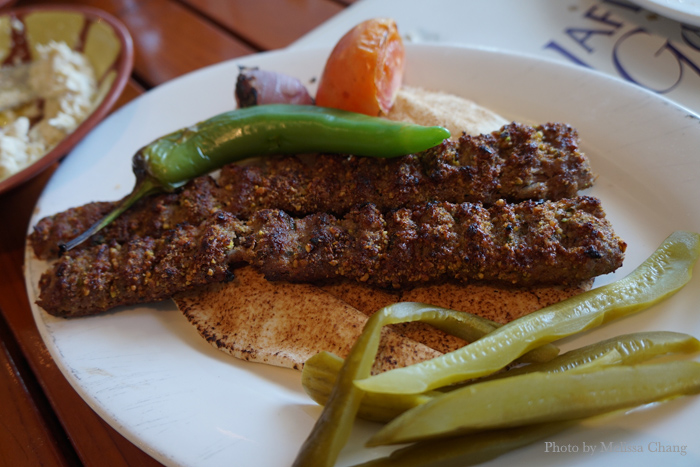 If you’re into lamb, you’ll love Dubai; the meat is wonderfully tender and full of flavor, and not gamey. If you’re not into lamb, this may be the place to give it a try. 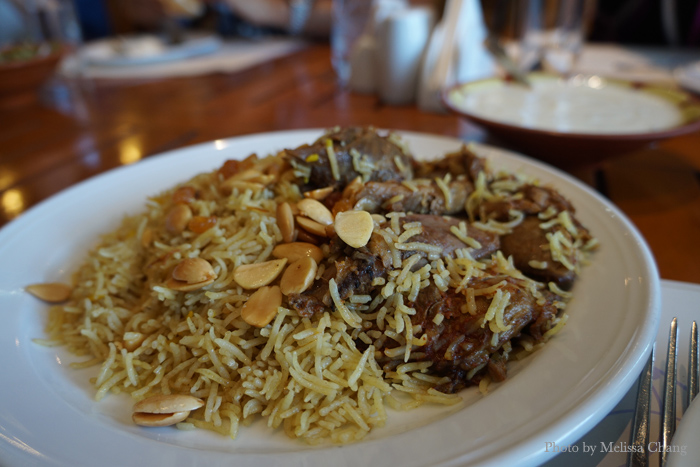 I loved the mutton masala, which came with a yogurt sauce (background) and long-grain rice with raisins and almonds. It didn’t taste super exotic, but I could tell it was seasoned in a way that I wouldn’t be able to replicate at home. 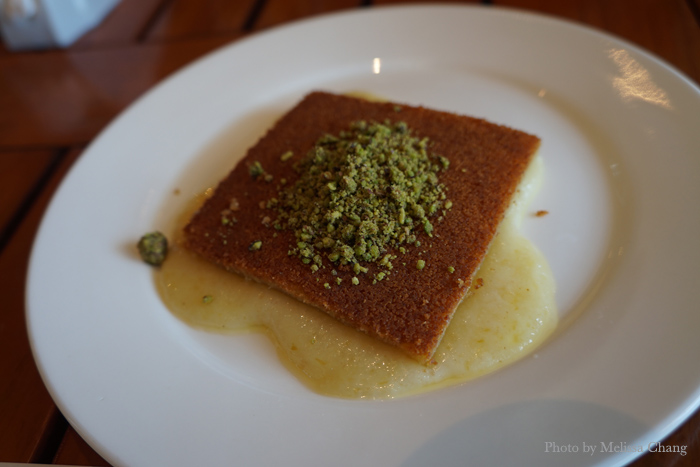 There are different ways to spell this dessert, but no matter how you do it, it’s pronounced kuh-nah-fah. And it’s awesome. It has the consistency of butter mochi, but it’s actually vermicelli pasta crushed up, cooked and pressed into a pan, then cut into squares. It’s got an oozy cheese filling and is sprinkled with pistachios, then a simple syrup (or sometimes rose or orange syrup) drizzle. It seems so simple, but Varouj Artinjian of Mary’s Mediterranean Kitchen in Mapunapuna said that not all the ingredients are sold in Hawaii, so it can’t be replicated here.

Nisrine suggested Karam Beirut, which is also in Dubai Mall. It’s also Lebanese and has dishes similar to Wafi Gourmet. 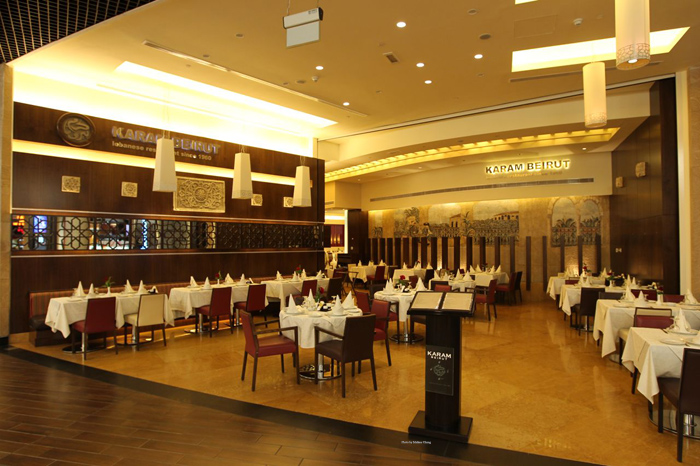 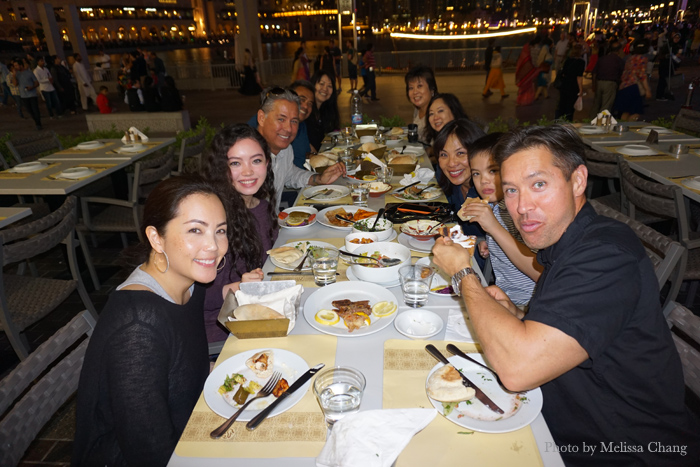 With our hosts, the Remington family! Jolie and Bobby (front) are originally from Mililani but have lived in Dubai for about 18 months. Their daughter Quinn is next to Jolie, and son Aidan is next to Bobby. Clockwise from left, starting from Quinn, are: JR Buenconsejo (Jolie’s brother), Kyle Unten, Val Ogi, me, Nadine Kam, and Avis Thomas. 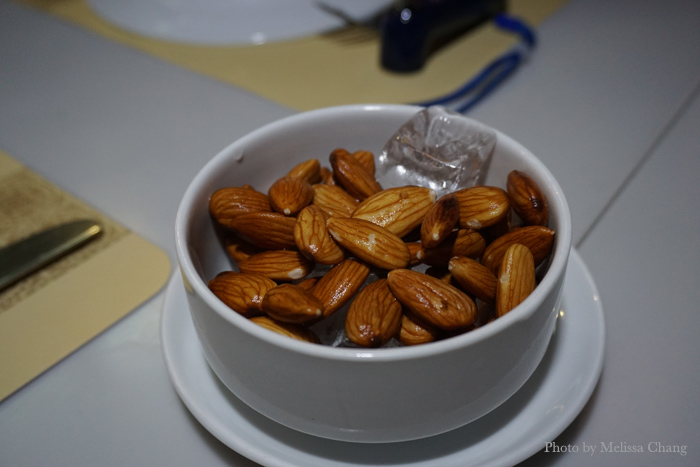 They started us with a bowl of almonds on ice cubes. We’re still not sure why it’s served this way, but the ice does provide moisture to help you peel the skins off the almonds. Too much work for me! 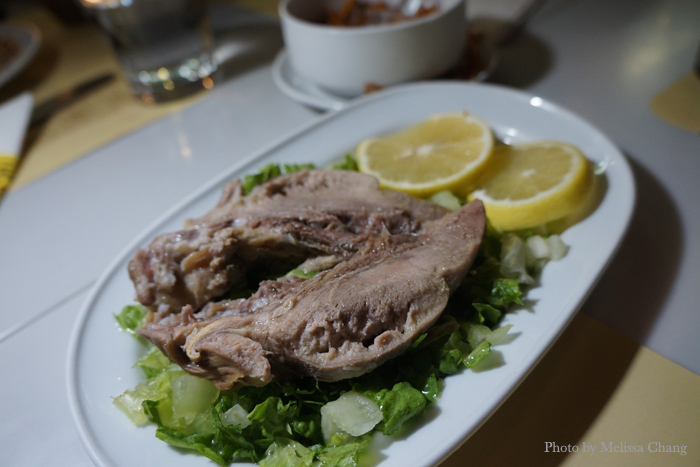 The lamb tongue sounded interesting, but I wouldn’t order it again. Unlike cow tongue that we eat here, it’s pretty much just boiled, then seasoned with lemon juice and olive oil — soft and meaty, but very plain. This would be a great pupu with the right sauce! 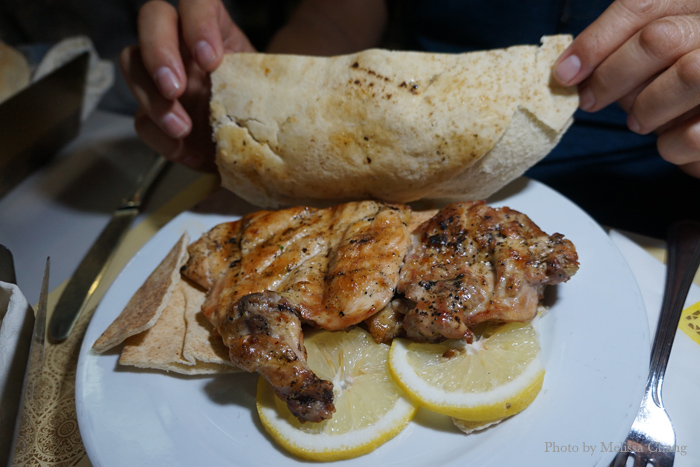 No surprises with the grilled chicken: It was moist but not oily, and served with pita to make it easier to eat without getting your hands dirty. 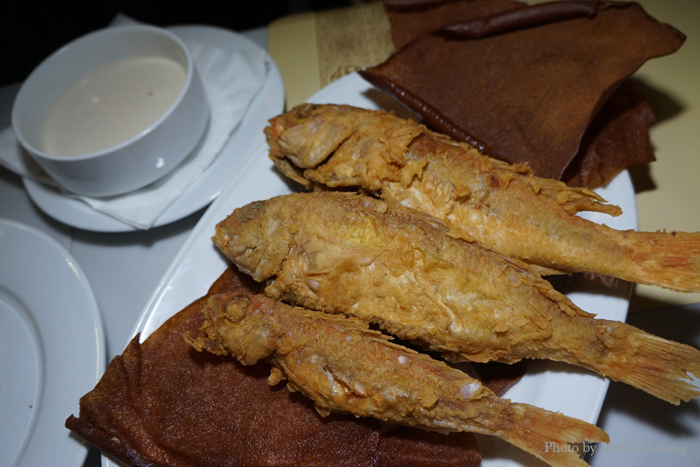 The red mullet dish sounded interesting. These were baby fish, battered and fried whole, and served on fried pita with yogurt sauce on the side. Be careful with this dish if you order it, though, as it’s full of bones! 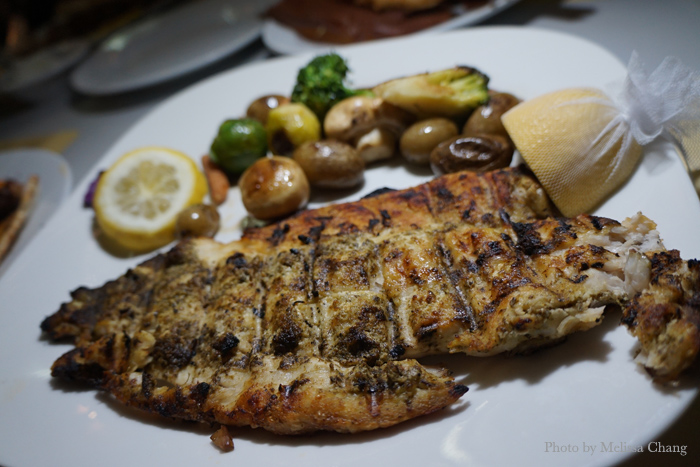 Hamour is brown striped bass and is probably one of the most popular fish in this region. You’ll see it on every menu, and it’s usually served like this: grilled with spices. I liked that it was moist and boneless, and it seems to have mild enough flavor that it could be served with different sauces or spices … so I wonder why they don’t change it up more? Maybe someone out there can answer that. It’s good, though, and I do recommend it. 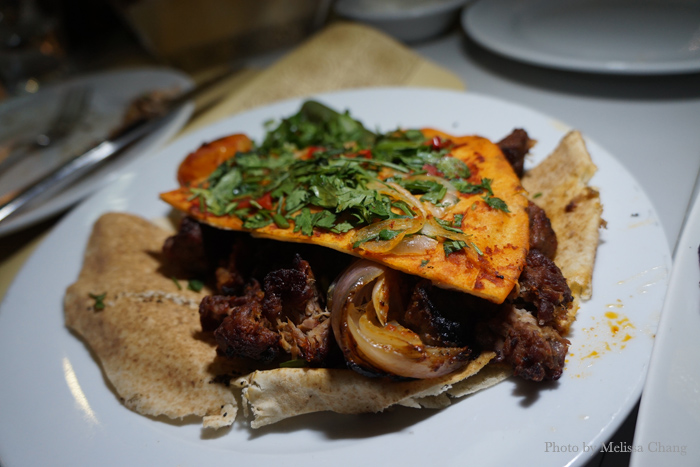 The spicy lamb was just mildly spicy, which was okay for me since I don’t like it to overpower the other ingredients. 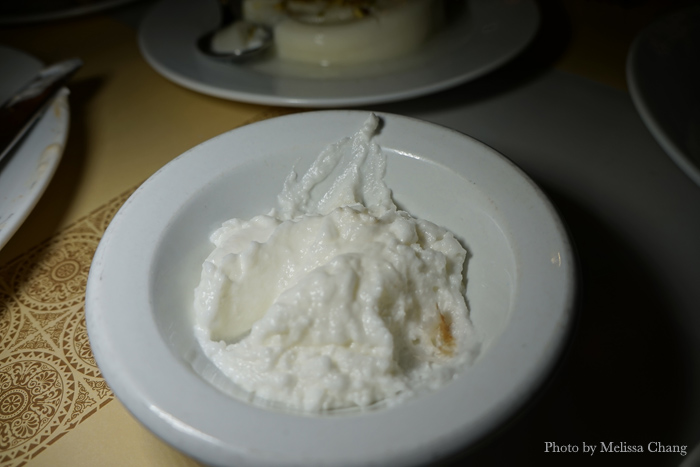 This garlic sauce was served with the chicken above but we all dug into it and ordered a second bowl because it was so delicious on everything. Another dining mystery — why don’t they just serve this with everything? We slathered it on the pita chips, on the fish, chicken, everything. It wasn’t too strong, but I’m sure it affected our breath. 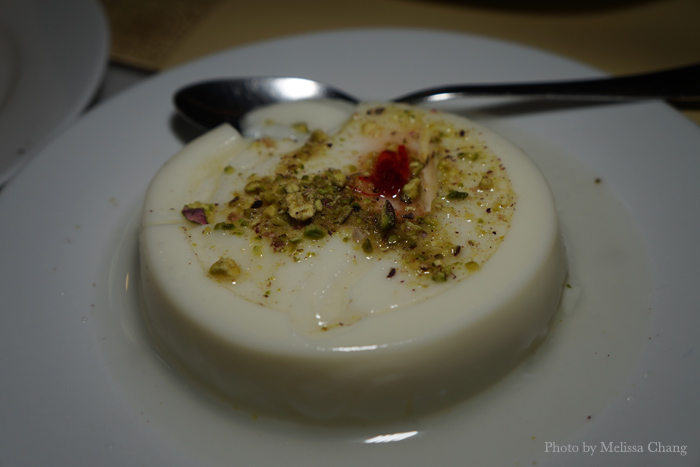 This was like a mild panna cotta, drizzled with rose water and crushed pistachios. It’s very light, and not as rich as it looks or sounds. 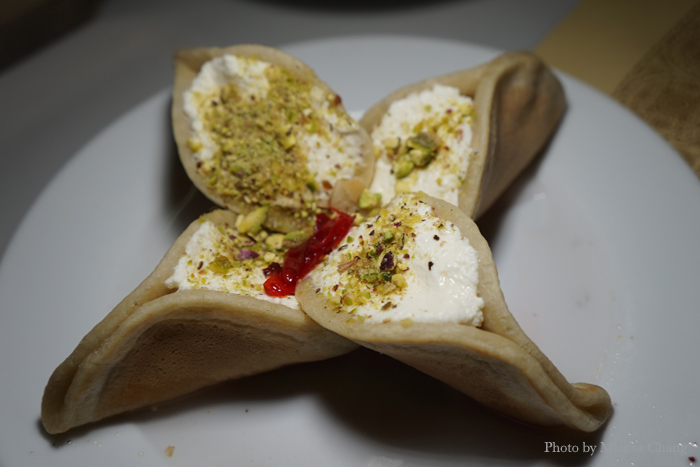 This dessert consisted of clotted cream in little pancakes, again sprinkled with crushed pistachios. While both of the desserts we had were pretty good, I have to say the knafa from Wafi Gourmet was the best and much more unique.

Below are samples of items we tried in the massive mall food courts! There’s a lot of Indian food in the food courts (top), and you can’t go wrong with any of them. The middle photo shows a mix grill plate from a Lebanese plate lunch spot, which included a grilled lamb chop. Who would have thought you could get restaurant-quality lamb in a food court? If you come across one of these vendors, and you like lamb, I recommend buying a whole plate of lamb instead of the mixed grill. 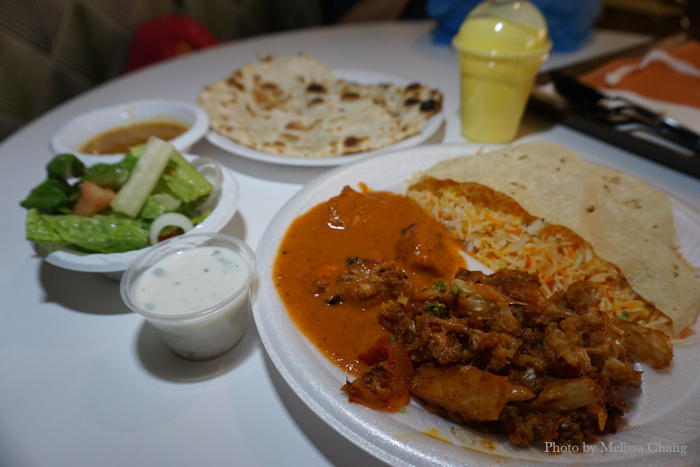 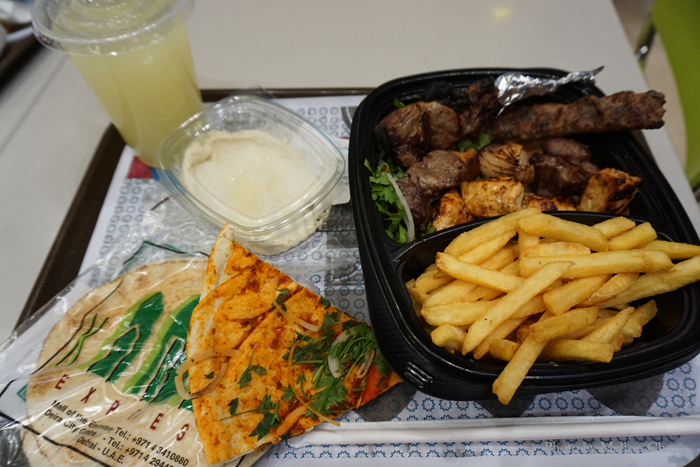 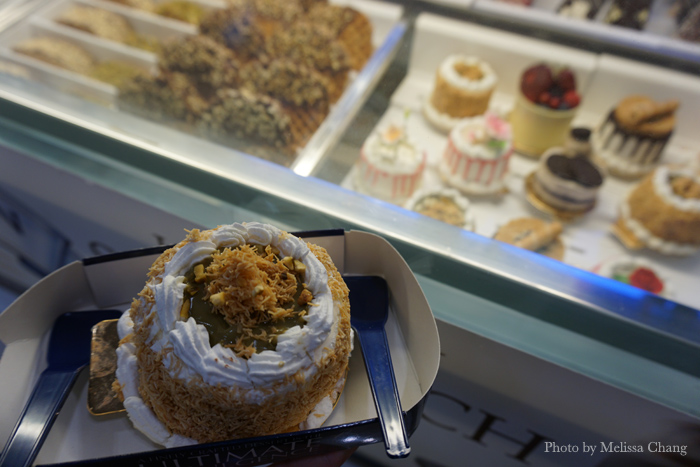 My last dessert in Dubai was a knafa ice cream cake from London Creamery. This ice cream spot is known for their fancy ice cream bars, but the cake was delightful, too. It didn’t taste exactly like our first knafa, but it was a good interpretation.

Just remember that Dubai is super westernized, so if there is anyone in your group who is not adventurous, there will be something for them to eat, not just Lebanese, Indian or Emirati food. To be honest, it felt wrong to see so many U.S. brands like P.F. Chang, Buffalo Wild Wings, Cinnabon, Hot Dog on a Stick, Shake Shack, etc. throughout the city. But there’s a huge Western population there, and a sizable Hawaii expat community, so you can expect to see many familiar stores and restaurants.

If you spend more time in Dubai, you’ll eat more than we did and probably a wider variety.

Up next: from malls to the old markets! A quick look at the spice, gold and textile souks.