You can’t go to Dubai without visiting the souks (old markets), at least for the experience. They’re full of stimulation for all the senses, to be sure, even if you’re not looking to buy anything.

Here’s my warning, though: You know how, when you walk through American malls, there are kiosks with aggressive salespeople calling to you or even grabbing at you? That’s how it is in the entire malls on this side of the world. And it’s even worse at the souks. If you don’t like that kind of, um, salesmanship, don’t go.

Tip: shop a little first at the big supermarkets — Carrefour, Tesco, Geant, etc. — to get a better idea of what’s available, how they’re packaged, and what the prices are. When you go to the souks, there are few items with marked prices and you are expected to negotiate for what you’re buying. And sometimes, the packaging at the supermarkets make things clearer when you bring it home for souvenirs. I bought a little at both the souks and the supermarkets, not always for the price, but the packaging.

Our day started with some henna tattoos by JR’s talented niece Quinn Remington, who lives in Dubai. 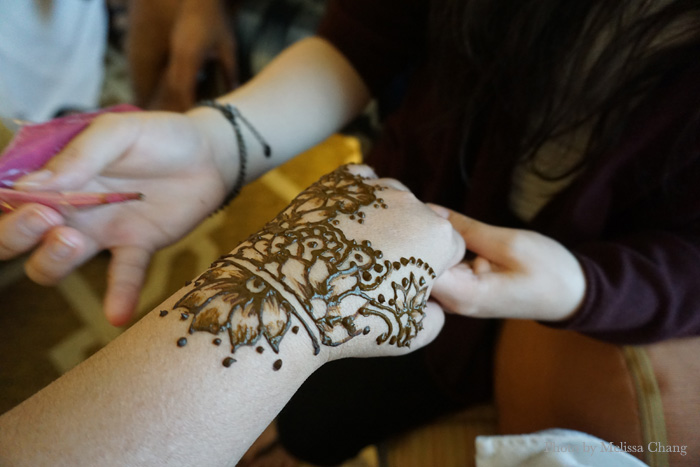 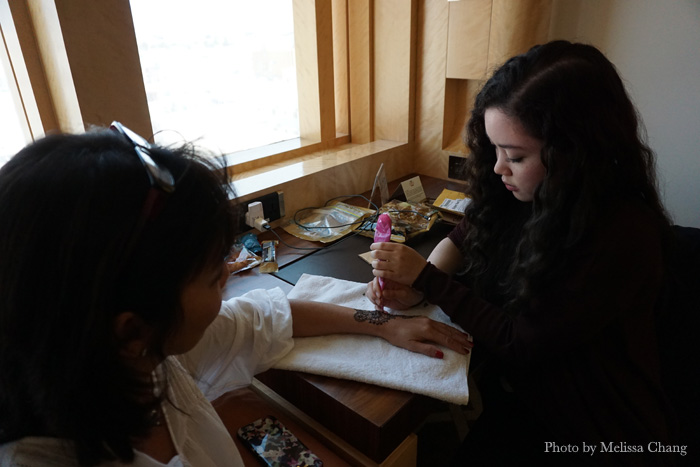 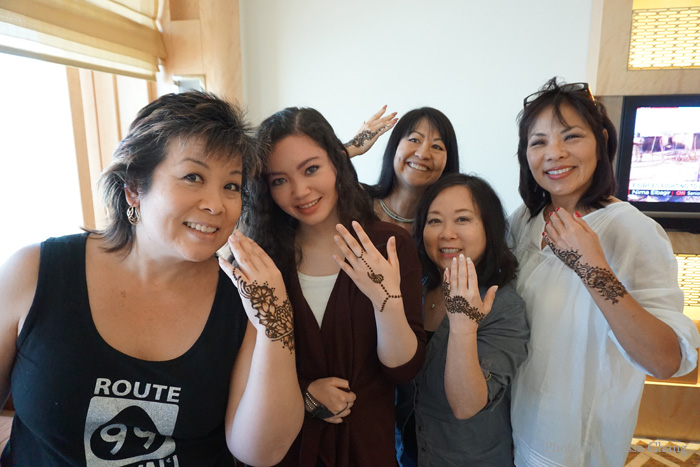 Here’s a quick spin through the gold souq. Most of the stores don’t open until 10 a.m., so it was a little odd to see many of the stores with shopkeepers who wouldn’t let us look at anything. 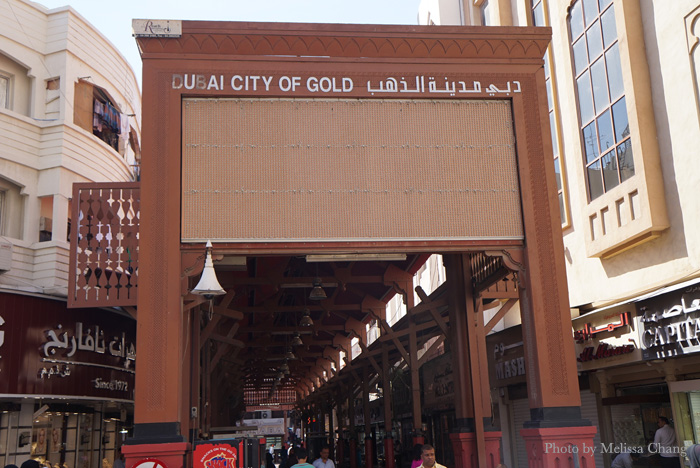 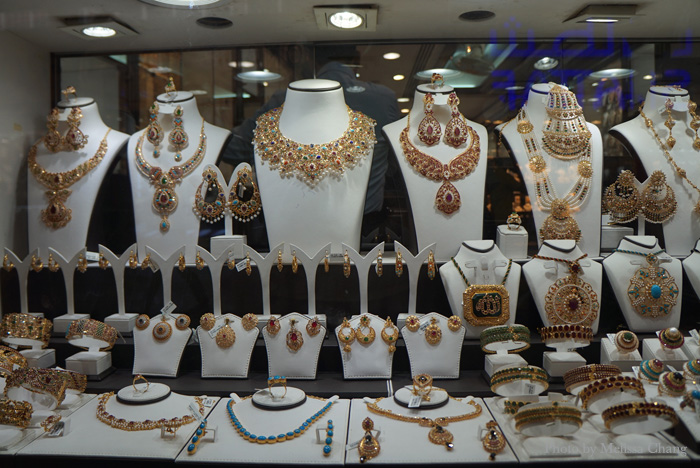 Tip: You can buy gold jewelry at the airport under less pressure, but there’s definitely more variety at the souq, which has about 300 retailers. So if you’re really in the market for jewelry designed here, take your time and make no apologies. 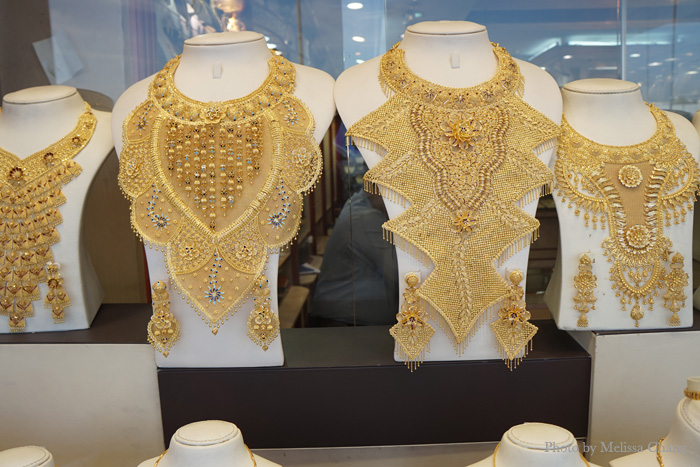 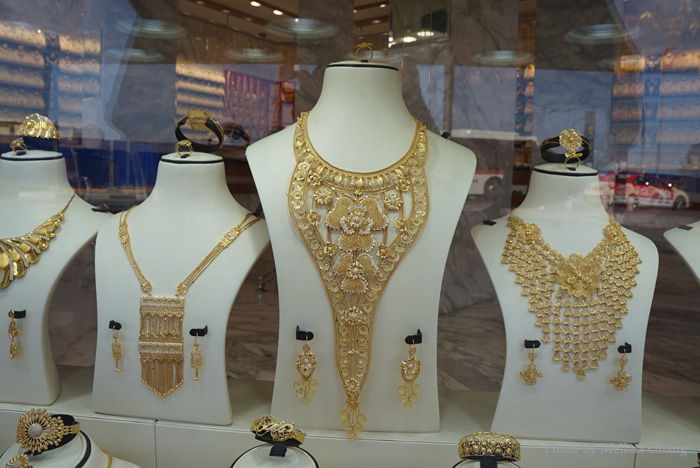 We saw everything from tiny, dainty pieces to elaborate gold breastplates, even a dress! Women really do wear these here, but for special occasions, like weddings. We weren’t going to buy them, so we didn’t ask how much they were, but I’d say some of the breastplates in the top photo cost and much as a Prius. It’s estimated that at any given time, there are 10 tons of gold present at the souq. 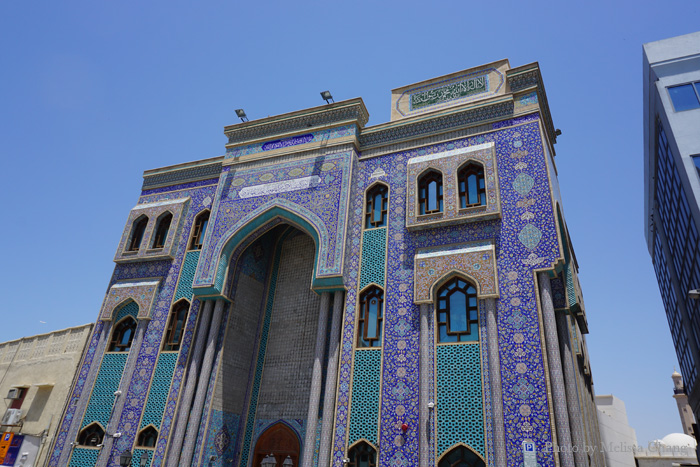 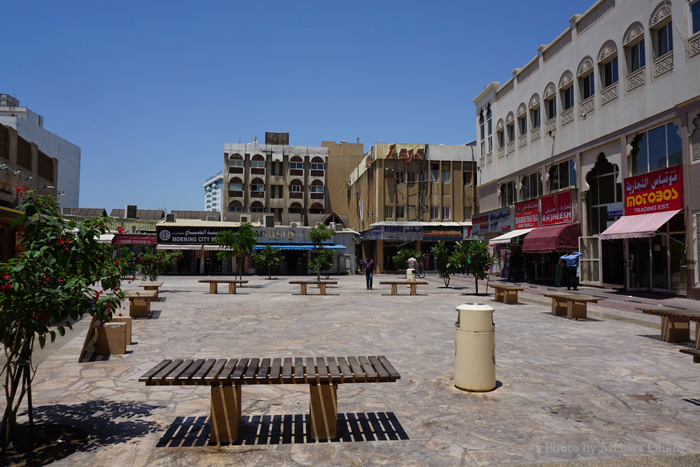 All of the souqs are located in Deira Dubai, or the old part of town, and are in walking distance of each other. Many people drive, though, since it’s so hot. If you’re headed to the textile souq, you’ll see a mosque, then an open courtyard that leads to an alley that goes into the souq. Can we be any more hidden? If you have some time, take a break and take in the architecture around this area, as it is kind of neat. 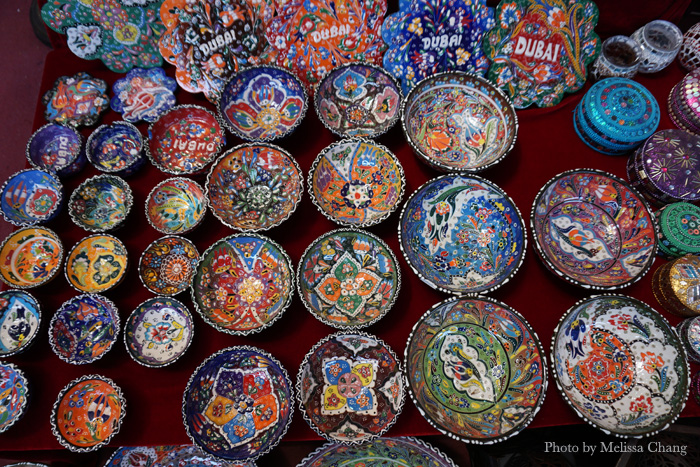 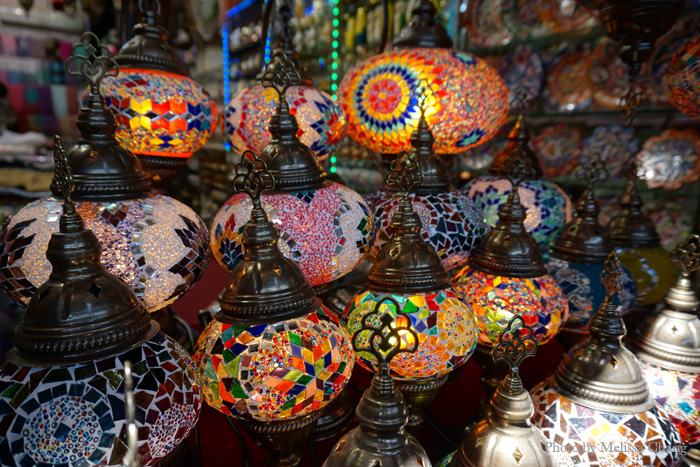 I didn’t really stop to take photos in the textile souq as the salespeople were most aggressive here. You can get scarves, clothes, fabric, shoes, accessories, and of course, household items like the bowls and lamps above. They do sell spices here, and the spice souq has some clothing vendors, but I think the clothes here are probably cheaper at the textile souq. 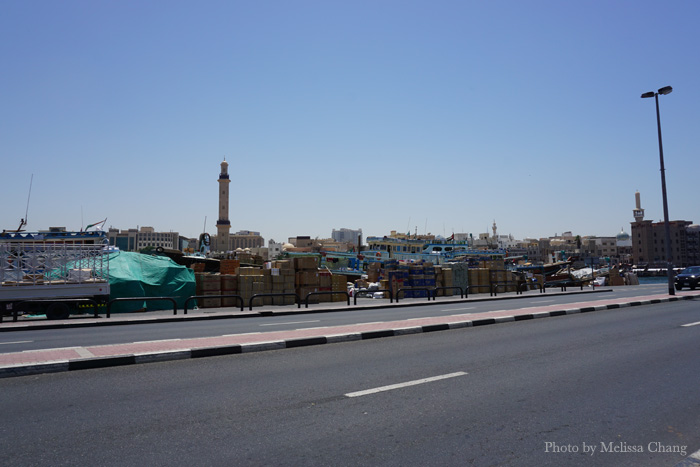 You’ll see the docks directly across from the spice souq, and it’s a little alarming to see that they unload things right there on the sidewalk. There’s no Matson here! 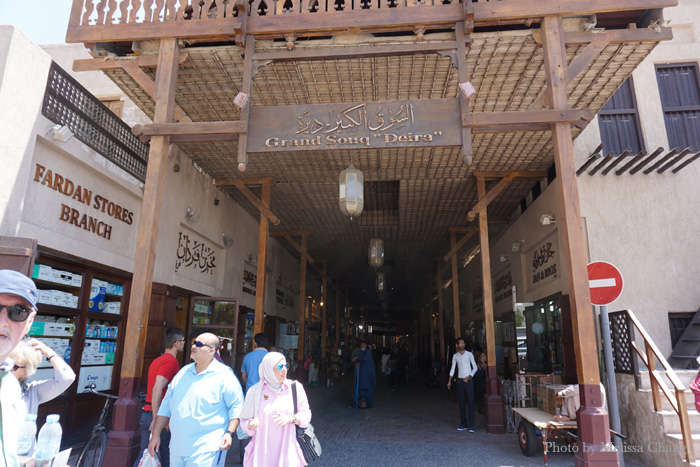 The entrance to the old spice souk.

The spice souq is probably the largest of the three that we experienced, with several winding lanes in one area making it a maze to get through. It was also the most visual, with a large variety of items, not just spices. 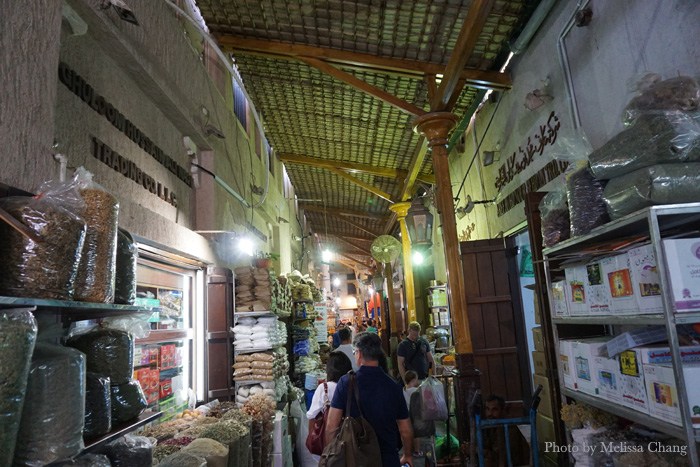 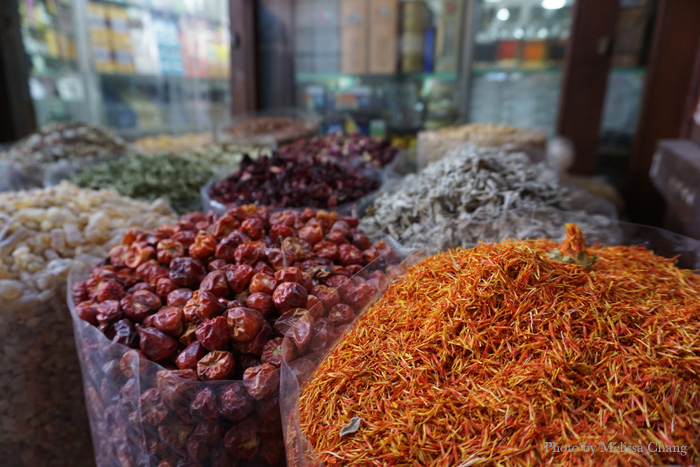 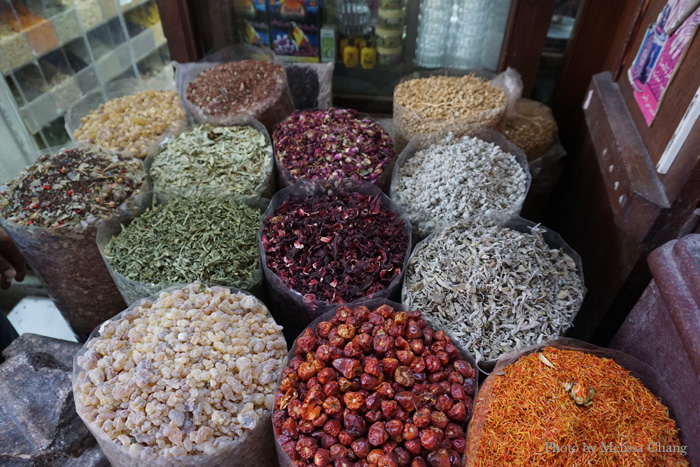 Here, many of the spices and flowers are displayed openly, and many of them are very unfamiliar. Don’t be shy; ask what things are … you may be surprised! 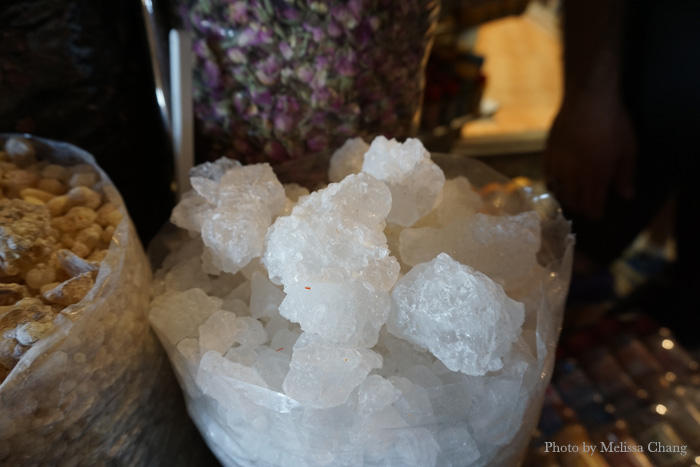 This is aftershave for men. What? They said they rub this on their faces after shaving! 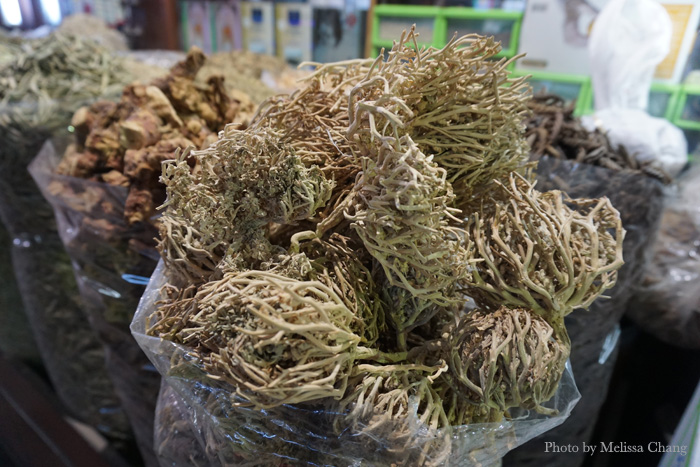 My group left as I was taking photos of this one so I didn’t get a chance to ask. Does anyone know what this is? 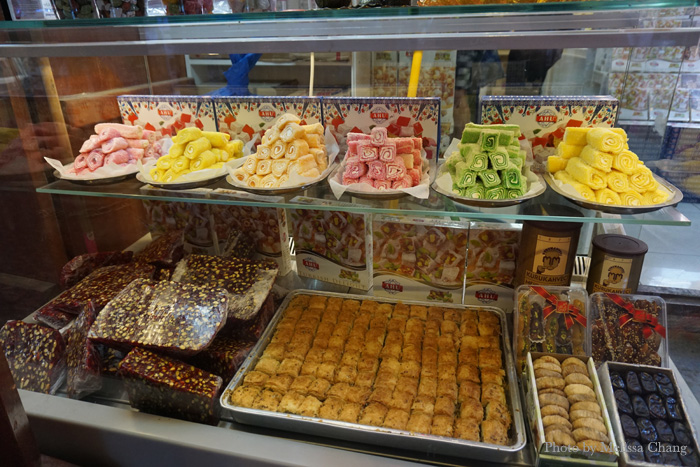 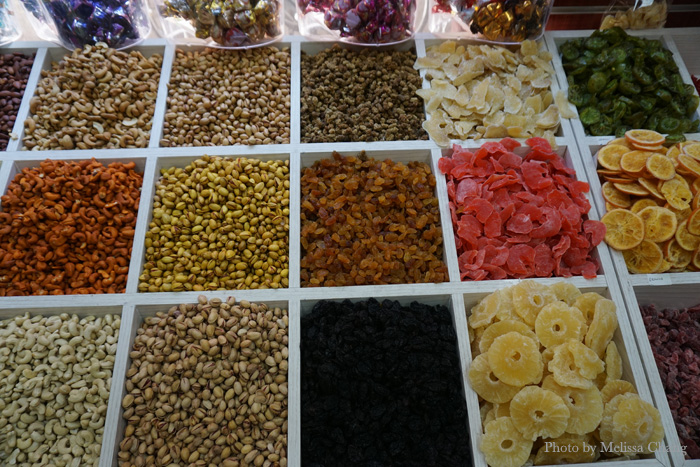 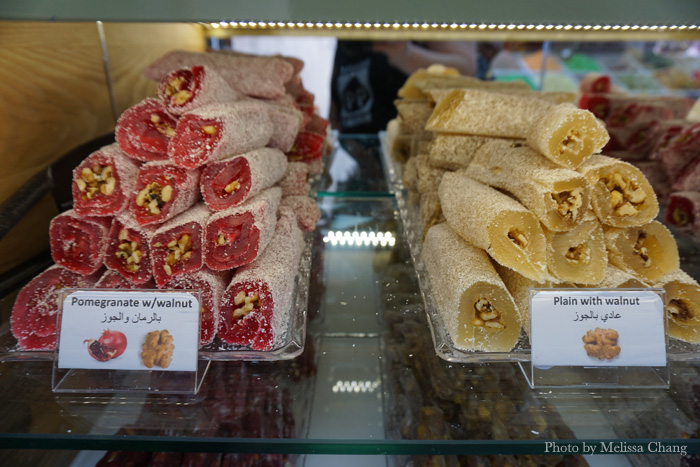 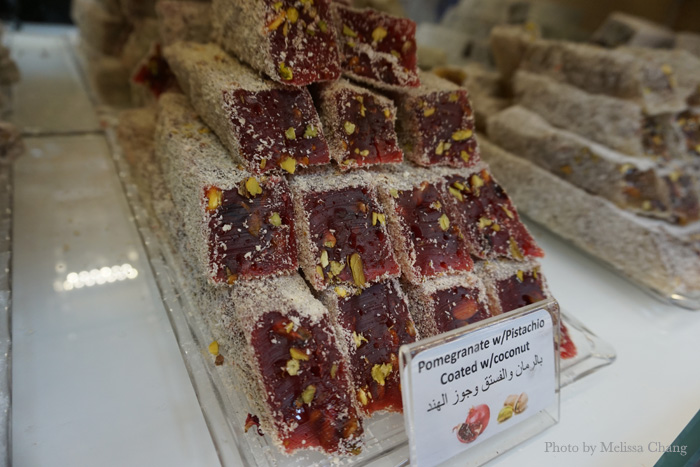 I didn’t need to buy dried fruits, since we have a lot of that here, but I do regret not stopping to buy candies from the one confectionary store we saw. He had a lot of unusual items that I didn’t see in any other stores, like the pomegranate jelly with pistachio. He gave us a lot of samples, which all had intense flavors yet weren’t too sweet. 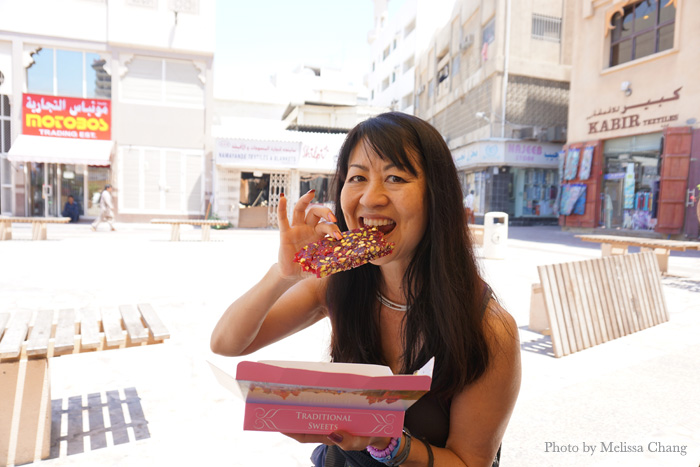 Val got the pomegranate candy with pistachio, plus some others. We asked who she was bringing that home for and she said, “Bring it home? No, I bought it to eat right now!” (Val bought a lot of foodstuff that never made it into her suitcase.) 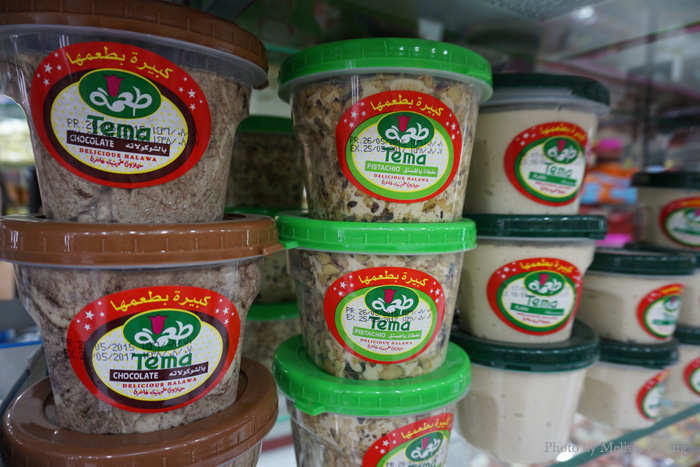 Delicious Halawa? No, it’s not describing the area near Aloha Stadium. You’ve heard of halva, right? It’s a super-sweet confection, usually nut butter-based (but sometimes flour-based) and usually using tahini, or sesame. I almost brought some of this home, but couldn’t think of who I’d give it to! I did buy more things from this store, though. 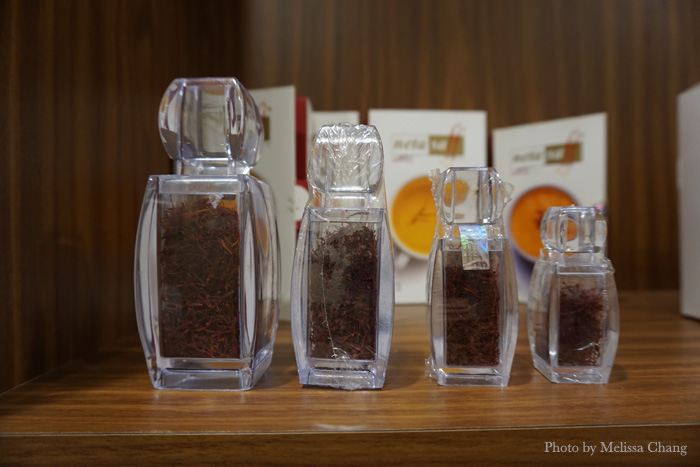 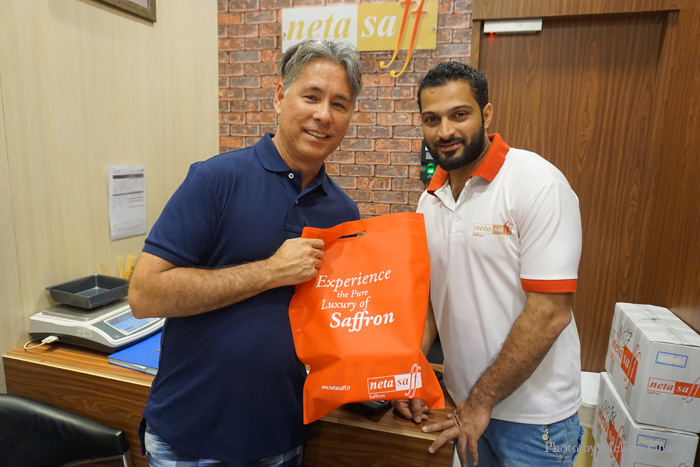 And I bought a lot of saffron from Samir at the Neta Saff store, since it was nicely priced and displayed in these classy containers. The middle east is known for their saffron, and as you could see, they sell a lot of it. Our salesman, Samir pointed out that his saffron wasn’t a blend — many vendors mix the strands so you get red and yellow in one batch — but higher quality since it was all red.

Which brings me to a little travel rant, which I rarely do: As obnoxious Americans, we are told to learn other people’s cultures so that when they visit us, we can be more sensitive to their needs. We’re also told to learn other people’s cultures so that when we visit them, we don’t offend anyone. I’m all for that, but why don’t more of these middle eastern salespeople learn our culture, as well? I was pretty stressed out from the aggressiveness of the salespeople, and ended up buying more from Samir, the halawa store and one other mostly because the shopkeepers were mellower. They hung back to give us space, but were attentive when we needed them, so I felt more relaxed and ready to buy. In one store, the older salesman was laid back and I was laying out the items I was going to buy. His younger coworker came back from a break and started his aggressive sales pitches, which essentially killed any more sales the older man could have made, since I just wanted to get out of there. If any Dubai salespeople want some lessons on how to sell to Westerners and Asians, call me.

Up next: a side trip to Abu Dhabi!