We wrapped up the group travel part of the trip with Doko Ga TV by exploring a few historic spots in Sapporo … and, of course, getting some last bites in. 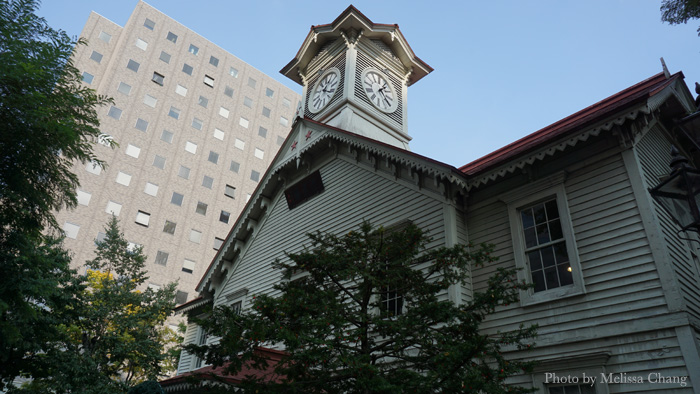 Before I show you the spots near JR Sapporo Station, I’ll just mention the Sapporo Clock Tower. In all my travels to Hokkaido, this was the first time I ever visited the clock, but most Japanese people make the trip there because it’s kind of the equivalent of visiting Aloha Tower. And, if you visit on October 16, admission is free because that’s the tower’s anniversary. In any case, it’s probably better if you visit on your first trip to Sapporo, as it gives you a good summary of the city’s history and how the agricultural industry became such a big focus for its residents. During this trip, the theme of Japanese men going off to the United States or Europe to learn new techniques (and falling in love with white girls) came up a few times, which surprised me since I thought Japan was a closed society back then. But apparently there were Western settlers who had a huge influence on the development of Hokkaido’s agricultural education and industry, which is why the island produces some of the most amazing food. 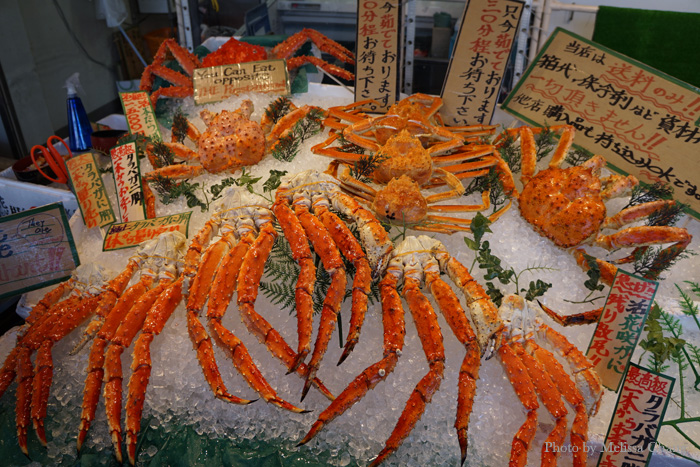 Crabs for sale at Nijo Market.

By the way, Nijo Market is just a 10-minute walk away from Sapporo Clock Tower, so if you’re in the area, you might as well check it out.

Nijo is a famous fish market in the middle of the city, and it can be a little touristy, since visitors like to eat breakfast there. After all of our adventures, we were too full to eat at Nijo, but it’s fun to see all the seafood and produce. 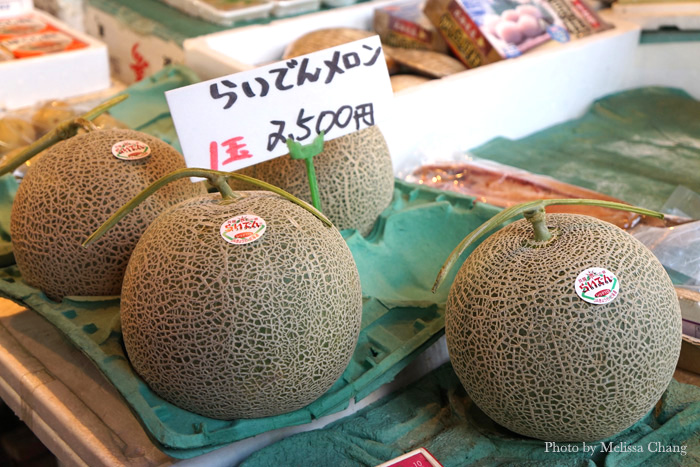 Yes, these yubari melons are about $25 each. That’s pretty cheap, considering that department stores often sell melons for about $75 or more. 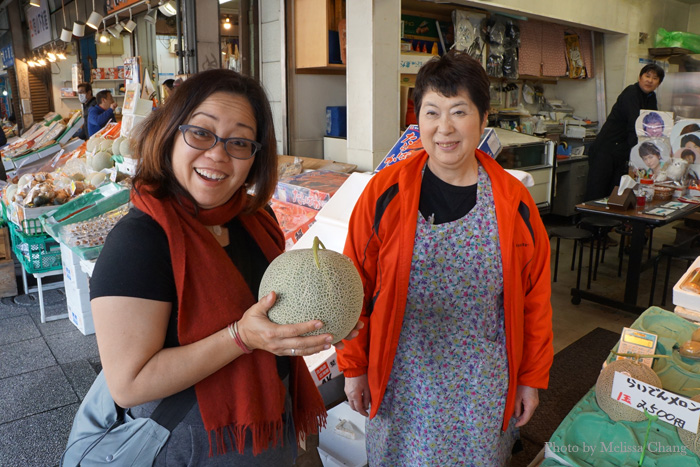 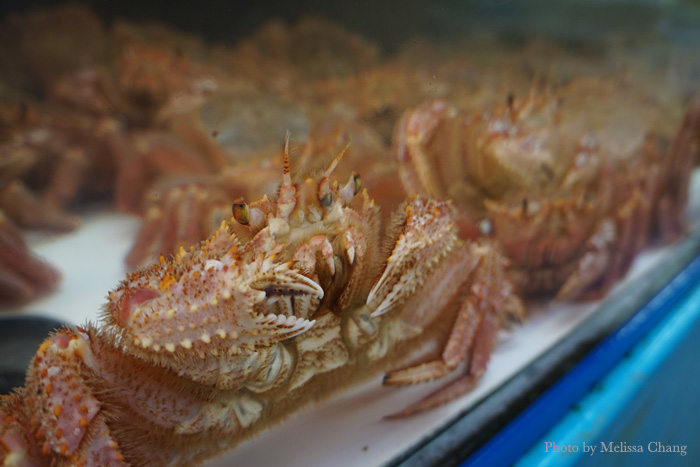 There’s a huge variety of live seafood in Nijo, which is why it’s a popular spot for breakfast. 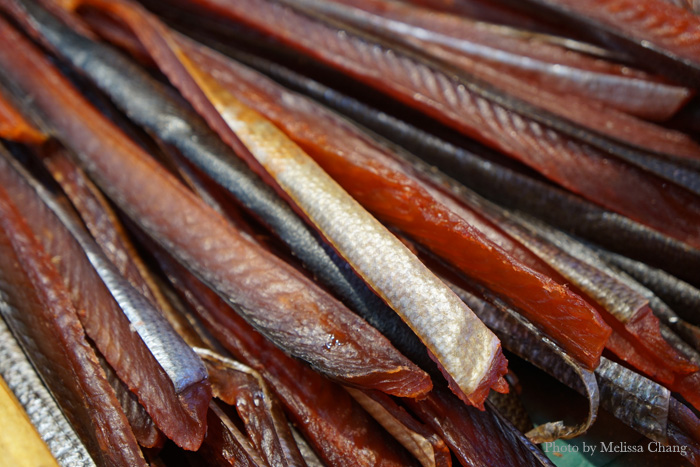 Dried salmon is a popular treat to bring home for omiyage. 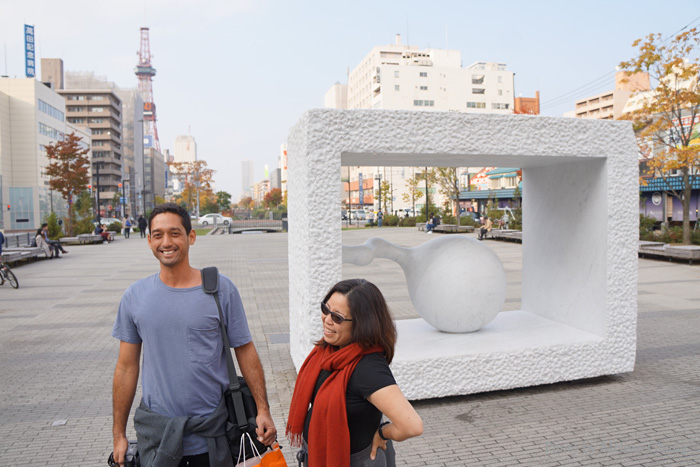 Just outside of the market, Kini and Deb found an art piece that depicted a fetus attached to a uterine wall. Um, okay. 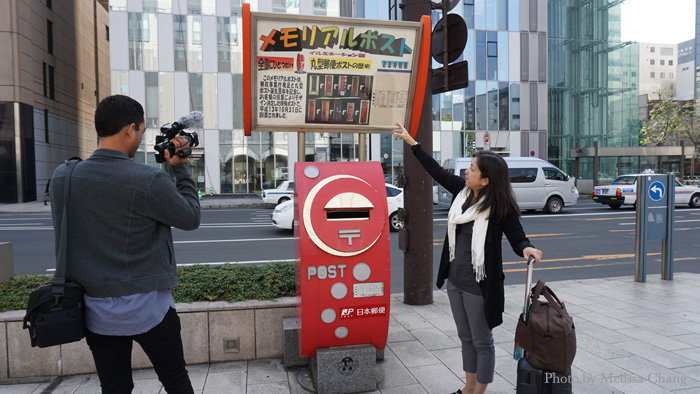 Yumi tells us about this mailbox outside of JR Sapporo Station, created to commemorate the 100th anniversary of the post boxes in Japan. It’s the only one of its kind and is actually used to receive mail.

You could spend an entire vacation at JR Sapporo Station and the adjacent shopping complexes above and below ground. Here’s a look at some eats in and around the station, and then a few blocks away. 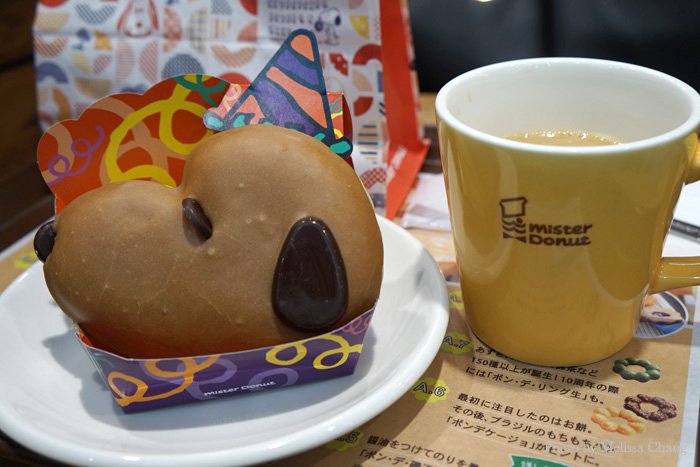 Just inside the station, you’ll find a Mister Donut shop at the North exit. Every season, they offer different promotional pastries; this past fall was the Snoopy donut, in vanilla and (I think) butterscotch. It was a little hard to bite into this cute face. 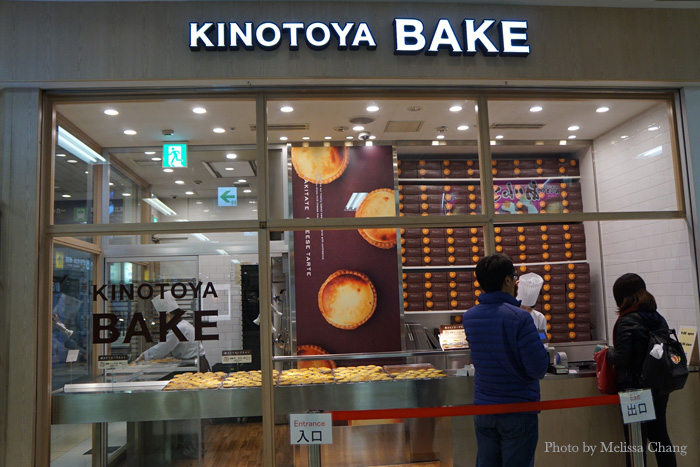 In Tokyo, the lines are long at any of the famous Kinotoya BAKE cheesecake outlets. But here in Sapporo, where the tarts originated, you can walk right up to the counter at any time with no wait. 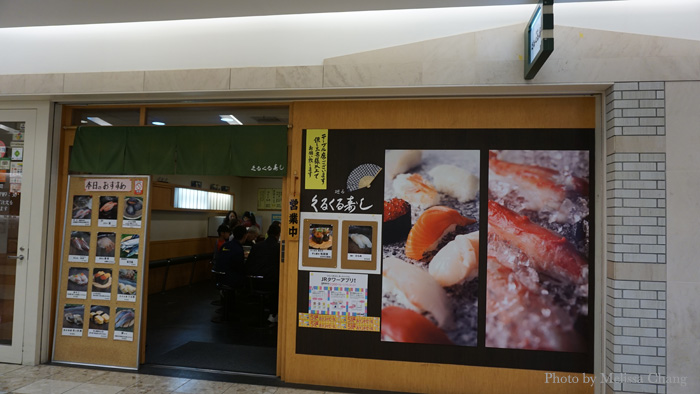 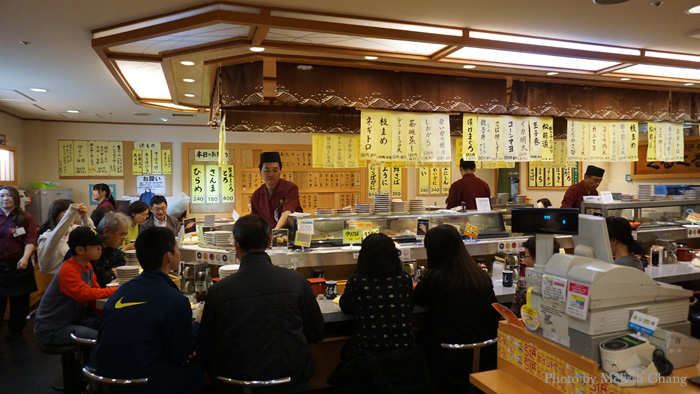 Everyone knows about the restaurants on the sixth floor of Stellar Place, the shopping complex above the train station. And, there is a long line to get in to Hanamaru, the reasonable, delicious conveyor-belt sushi restaurant there. Ain’t nobody got time for that! Yumi took us down below to the subterranean maze, and we discovered Kuru Kuru Sushi, a hotspot that was just as delicious and reasonable. The funny thing was, this was Kini’s first time trying ikura!
Kuru Kuru Sushi
APIA Joyfull walk B1F
011-209-3440 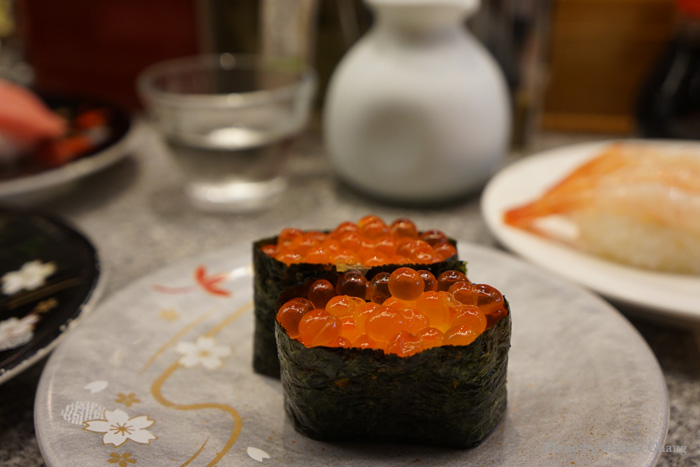 Breakfast of champions: ikura and sake. Actually, everyone else had beer. 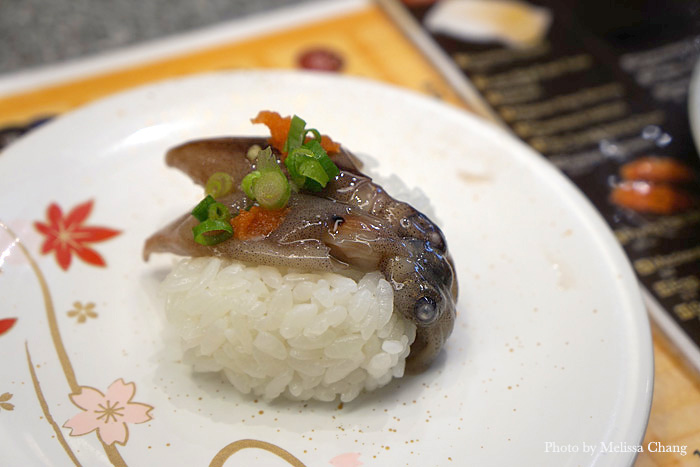 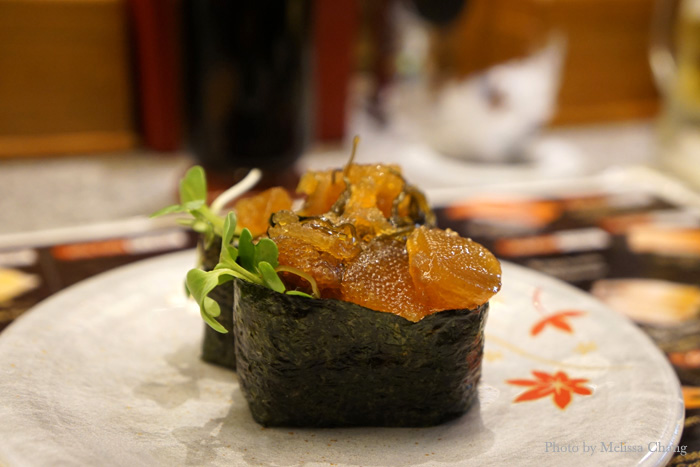 A different kind of fish roe, seasoned and cut to make nigiri. Oishii! 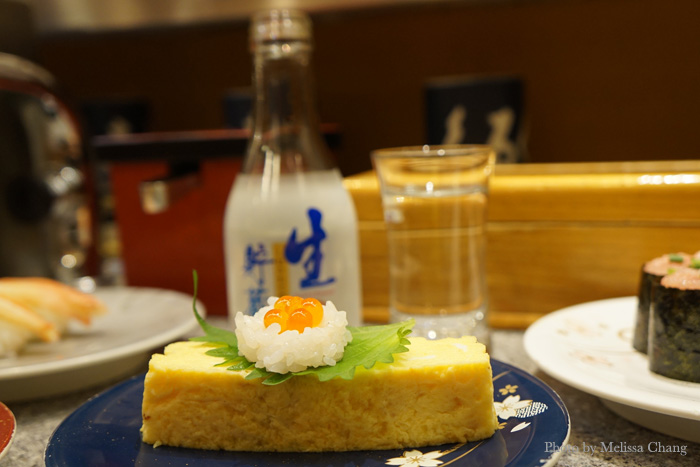 One of my favorites was the chef’s special, an omelette stuffed with shiso and a tiny bit of rice, then topped with ikura. 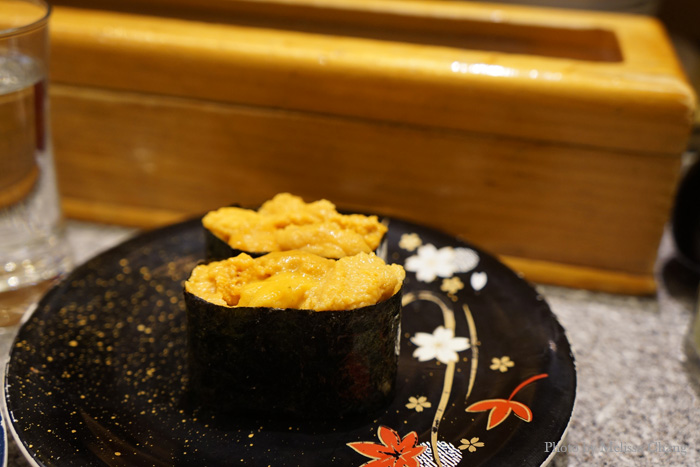 Even from the conveyor belt, Hokkaido uni in Hokkaido tastes amazing. 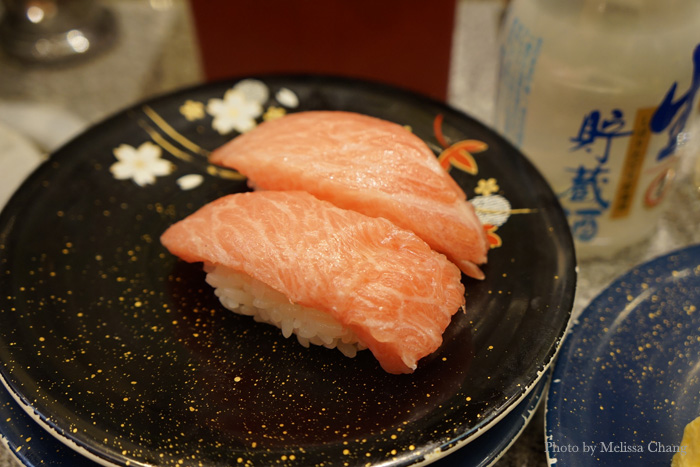 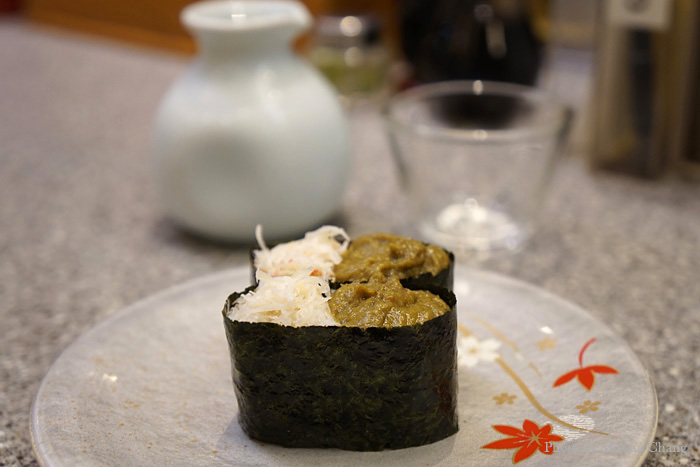 Kani (crab) miso nigiri! I’ve never seen this at home, so definitely get this when you’re on vacation.

I bought breakfast for four of us — including alcohol — and it came to about $100 or so. Yes, the high-end sushi bars are exquisite, but you can still get a high-quality sushi meal in Sapporo for a song. I liked it so much, I came back to have my birthday dinner here.

And finally: I’ve blogged about Umi Hachikyo before, but it’s so noteworthy that I had to do it again. We went there specifically to video for Doko Ga TV, and we got to go in before they started service so we could get some really great photos. 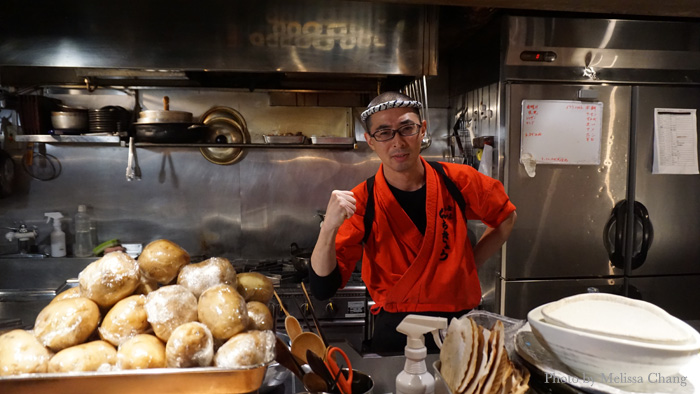 All the men on staff at Hachikyo have shaved heads and pose the same way for photos.

The owner is a man with a close-shaven head who, in order to make his staff appreciate the hard work fishermen do, actually sends them out for training on a fishing boat. Working conditions for fishermen are harsh and so dangerous that it’s not unknown for lives to be lost.

The thing to order here is their special ikura bowl, which is just $20 and is served with a big ceremony, below. To show gratitude and appreciation for the food the fishermen provide, it is forbidden to leave even one grain of rice in your bowl when you order their special ikura. Customers who do not finish their ikura bowl must give a donation to Hachikyo’s charity.

You are allowed to share the bowl, so don’t be too scared to order it! 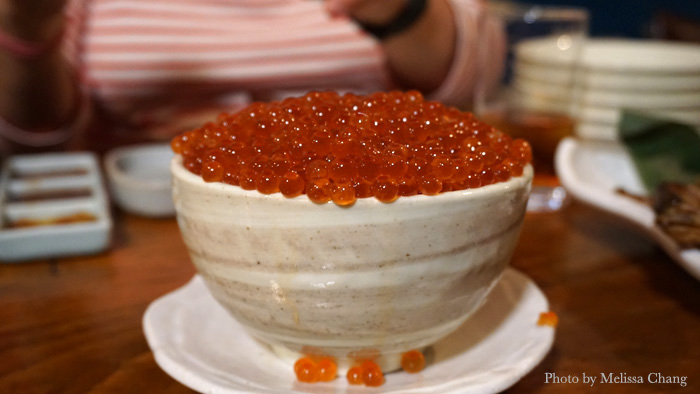 Of course, there are other things on the menu, all of which are excellent. 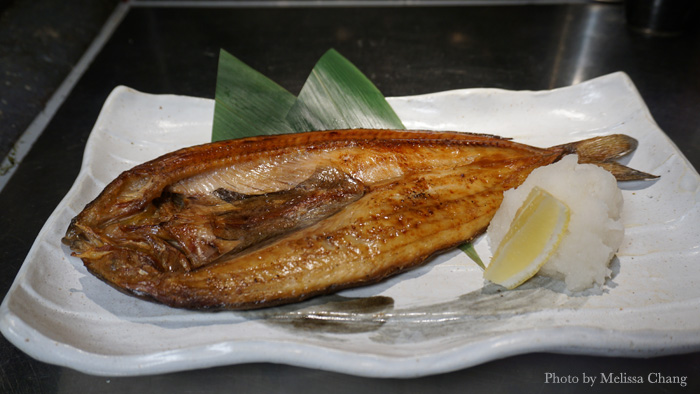 You’ll see Pali describe this fish in his episode of Doko Ga TV — it’s popular in Japan, but markedly larger in Hokkaido. 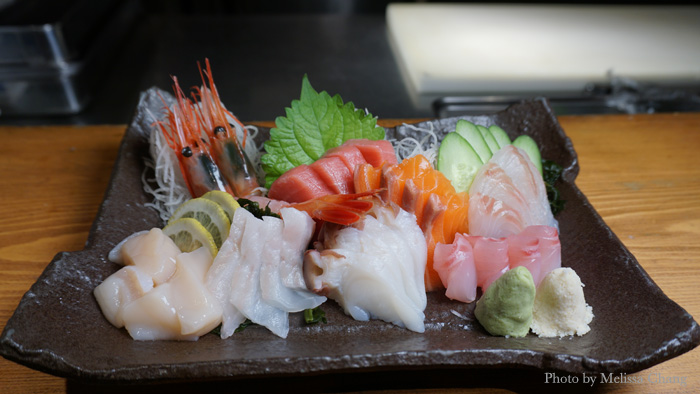 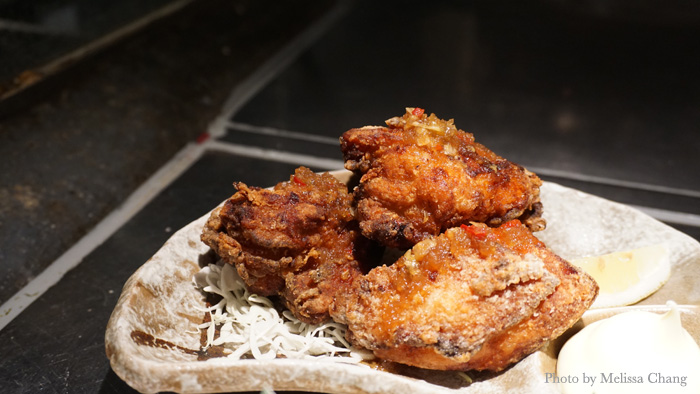 Hachikyo’s famous fried chicken isn’t quite karaage, since the pieces are so large. The chicken is moist, crisp, and drizzled with a sweet, spicy sauce that is very addicting.

Of all the restaurants in Sapporo, I’d have to say that this is one that is well worth finding. There’s no English menu, but if you know what you want, you can order — heck, just print out this blog post and show them the photos! It’s a very Japanese experience and the ikura ceremony is unique, not to mention everything is delicious.

And that is the end of our group activities for Doko Ga TV! Our Hokkaido adventures will be aired on Doko Ga TV starting December 4 at 11:30 a.m. on KBFD Channel 4, or HD 1004.

If you watch Doko Ga TV (doko ga means “where is..”), you know that Pali films all over the country. This tour, however, was provided by Hawaiian Airlines and the Hokkaido government to tie into his being named Hokkaido’s “Smile Ambassador” from Hawaii as they work to promote a sister state relationship. Hawaiian Airlines offers direct flights from Hawaii to Sapporo every other day, so it’s pretty easy for us to hop over there and see what Hokkaido has to offer. Mahalo to Hawaiian Airlines for flying us there; and mahalo to Love Hokkaido television and the Hokkaido government for their help in getting us around.

Up next: My solo adventures in Hakodate!

If you want to see all of the photos from this trip, click here. 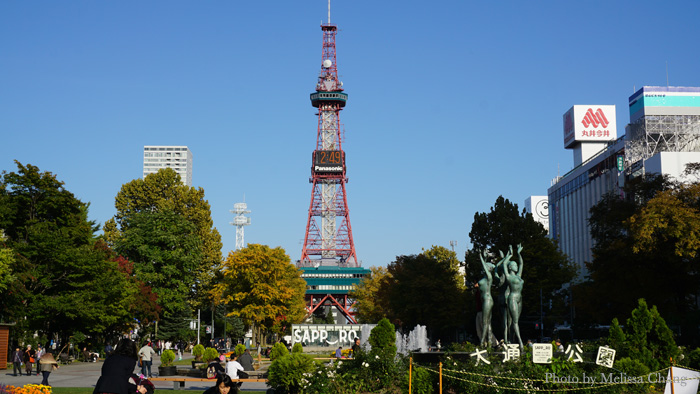