I’m constantly amazed to see how Maui’s culinary scene is evolving — a little different from Oahu, of course — and last weekend, the scene got kicked up another notch with the inaugural Maui Chefs Invitational. 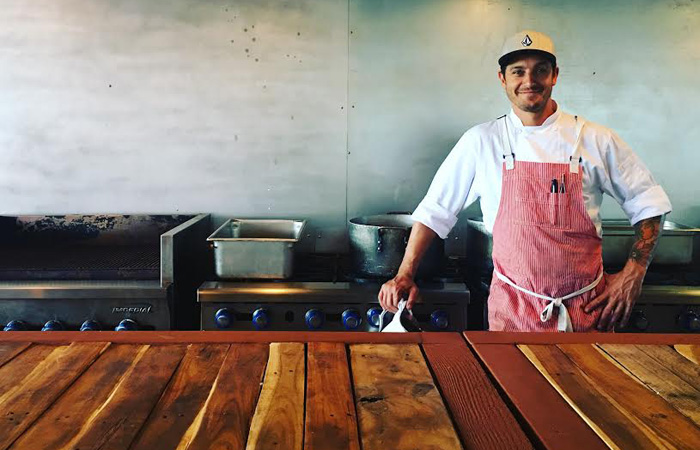 Mill House’s chef Jeff Scheer brought the event to Maui after participating in Portland’s “Chef’s Week PDX” last year. On the mainland, they’ve had about 30 chefs, but Jeff started small with eight chefs and hopes to grow the roster gradually.

If you didn’t hear about it, it wasn’t for lack of publicity; the Maui media was all over it, and the event’s cult following had people flying in to the Valley Isle just to attend, which helped them sell out all three days. I was fortunate that Dania Katz and Edible Hawaiian Islands magazine flew me in for the day to experience one of the dinners.

First, some behind-the-scenes prep with the chefs: 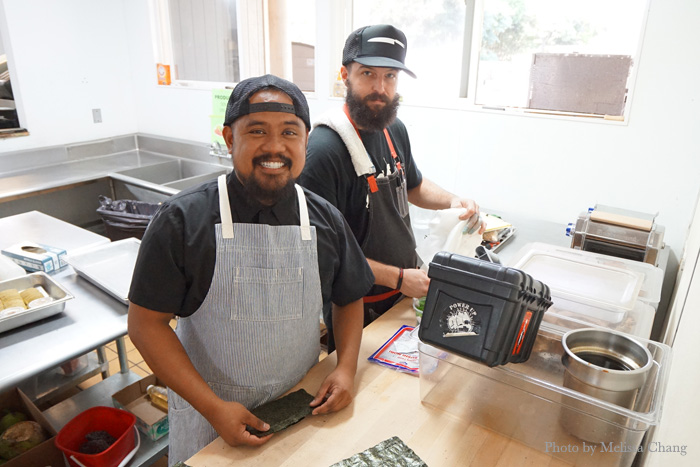 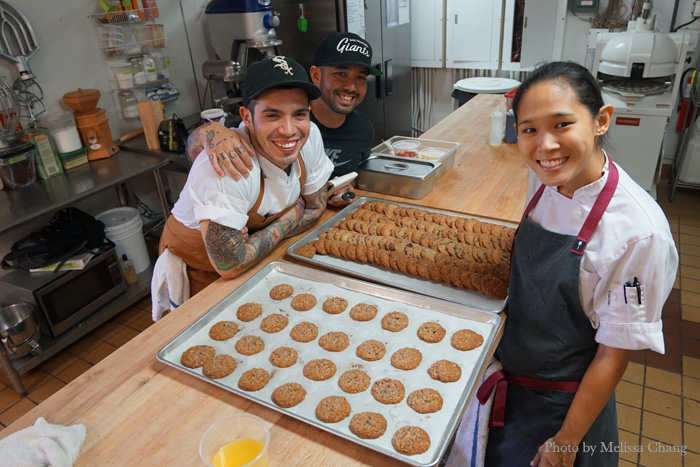 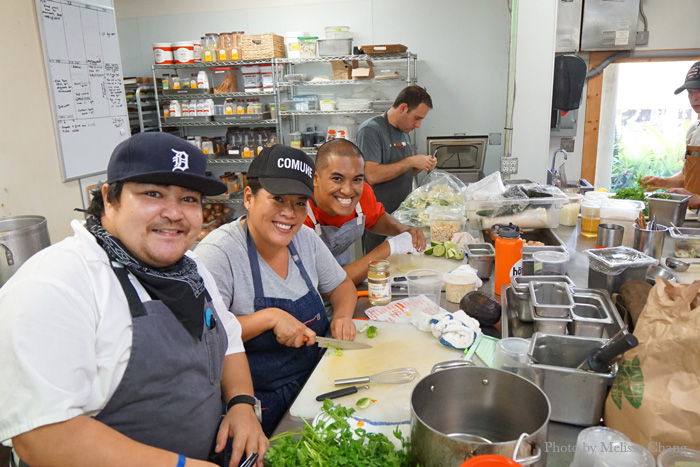 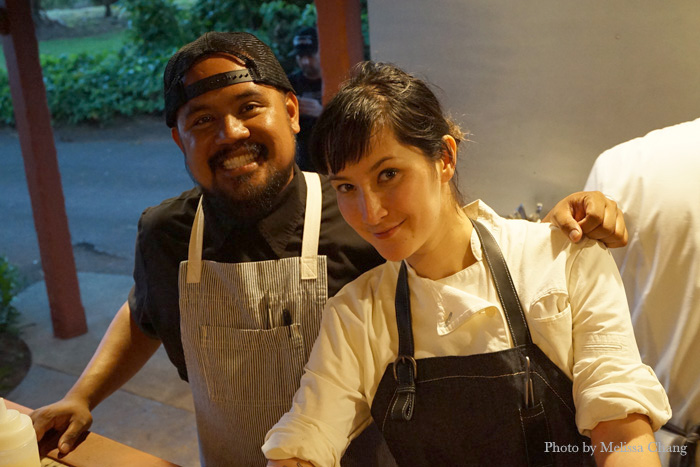 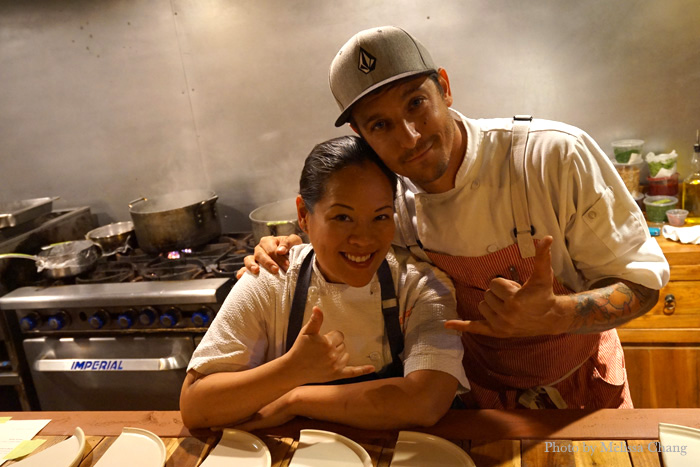 And then, our amazing dinner: 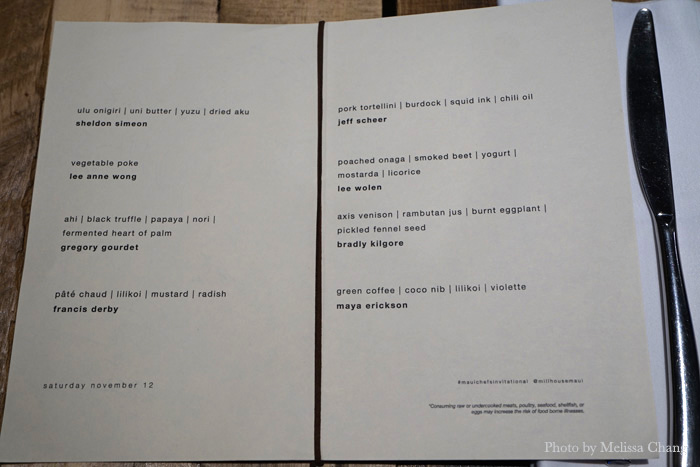 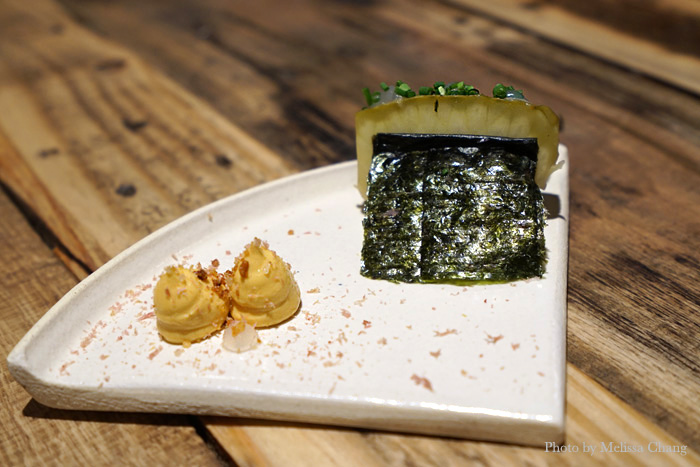 When Sheldon Simeon said he was making breadfruit onigiri, I was a little dubious. But this was so delicious, I wanted two! The breadfruit had a nice, slight smoky flavor and the uni butter added richness, while the dried aku gave it just enough saltiness. The yuzu was a nice finishing touch to add a slight brightness. 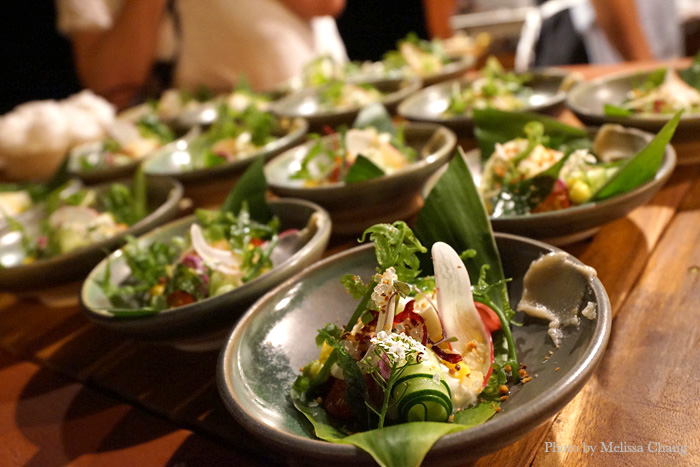 Lee Anne Wong’s vegetable “poke” had 26 ingredients and was almost too pretty to eat. But once I got into it, I couldn’t stop. The finger limes were a nice touch, too. 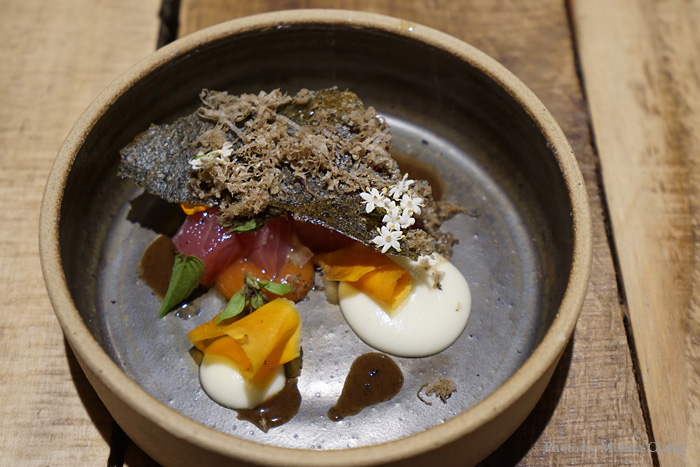 Gregory Gourdet has Haitian roots, so he’s familiar with poke. Here, he took fresh ahi cubes and put his twist on it with fermented heart of palm, nori tuile, paper-thin slices of dried papaya, and a sprinkle of black truffle “because I feel like celebrating.” It was definitely a celebration in my mouth! 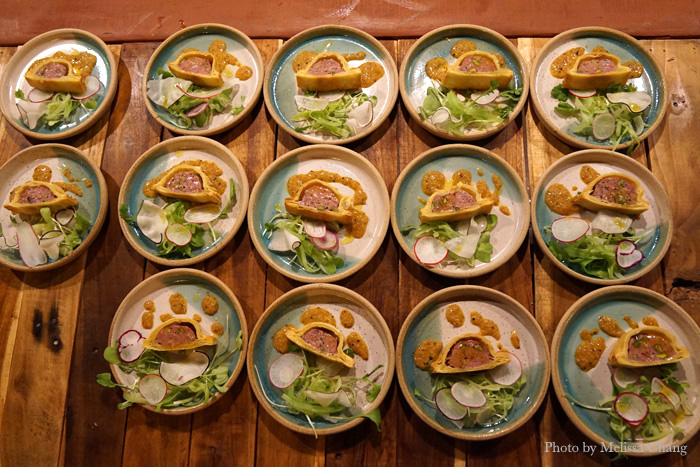 Francis Derby took a Malama Farms Berkshire and made pate chaud over little salad of radish and lilikoi mustard. That mustard was beautiful, with balanced sweet-tart heat. 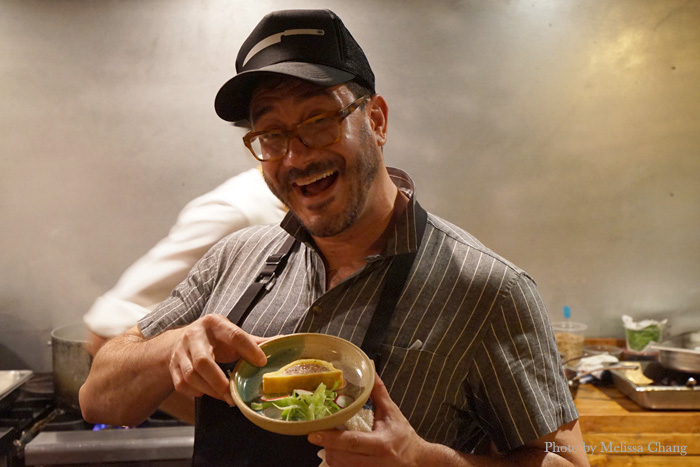 Okay, the pate itself was terrific, but that lilikoi mustard needs to be bottled! That really pulled everything together. 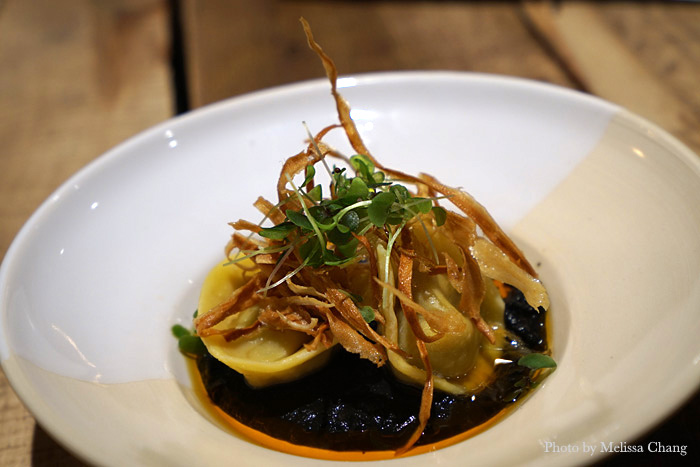 Jeff Scheer did a great job with his pork tortellini, which was topped with fried gobo. It sat on a bed of gobo puree, which he made more attractive with squid ink, and then drizzled chili oil. Put this on the Mill House menu! 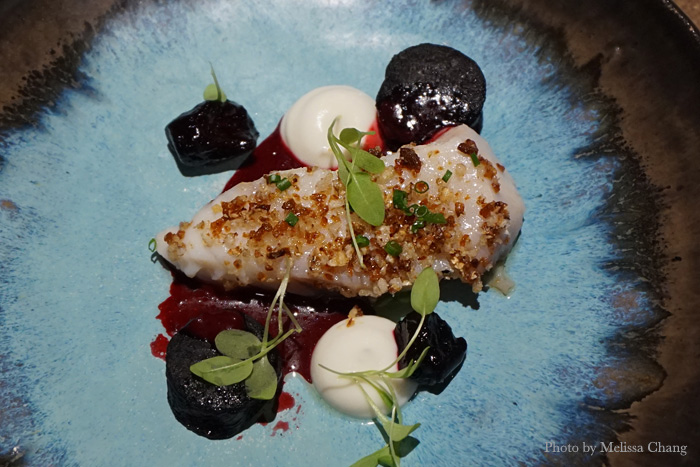 One of my favorite dishes was Lee Wolen’s poached onaga, served with smoked beets, yogurt, mostarda and licorice. What? No, this really did work well together, and he tempered each ingredient so their flavors were more subtle. Everything was executed perfectly. 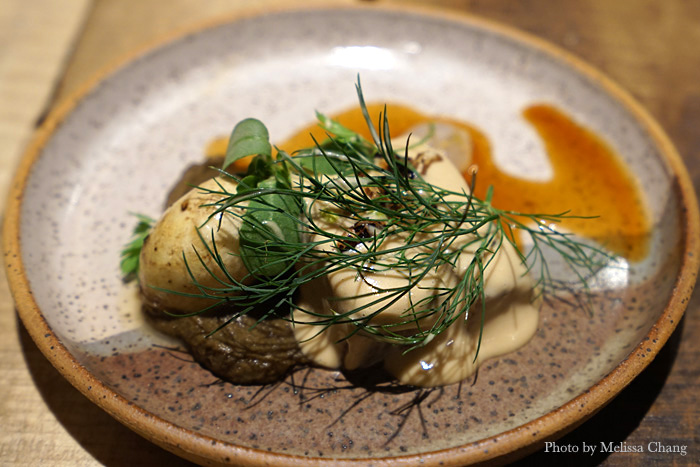 Bradley Kilgore massaged the Maui Nui Venison axis deer with coconut milk to get the gaminess out, then served it with a rambutan jus, pickled fennel seed, burnt eggplant and a salt-roasted turnip. Now, the dish itself was delicious, but see what he’s done with the dill and purslane? He made the deer look like it was in the woods. Very thoughtful presentation. 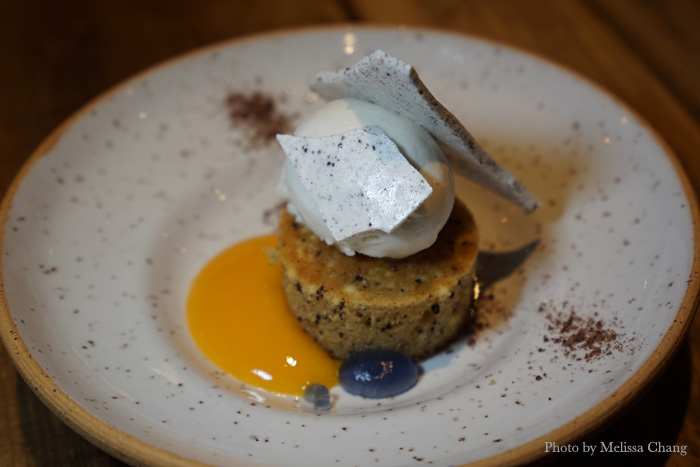 And, finally, 24-year-old Maya Okada Erickson, one of the best pastry chefs in the country, challenged herself with an ingredient she’d never heard of before: Green coffee. Usually, green coffee tastes like gravel to me, but she made it into ice cream to bring out its grassy, vanilla flavor. It’s on a coconut cake with lilikoi sauce and violette gel, with cacao salt to bring out the flavors.

I can honestly say, that was one of the best dinners I’ve had in a while. Everything was innovative, delicious and well-portioned. Sometimes in cooking for large groups, the quality of the food can be compromised, but here it wasn’t affected. 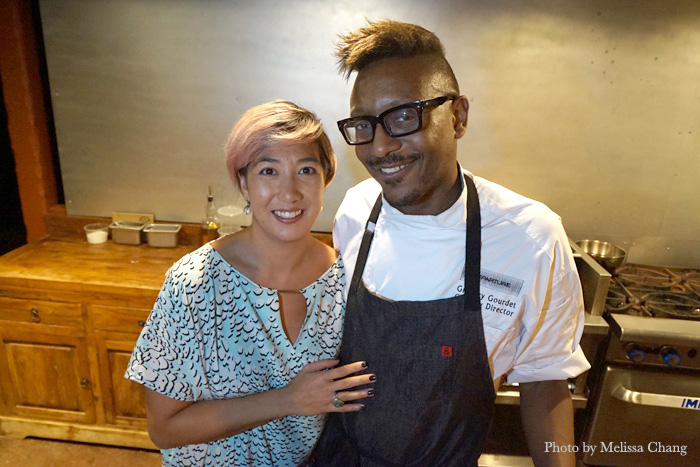 Jeff based his Maui Chefs Invitational on Chef’s Week PDX, with the help of Top Chef finalist Gregory Gourdet of Departures in Portland, and Tia Vanich (who, incidentally, has Hawaii ties and is on her way to Waimanalo as you read this). Tia produces festivals and events for the music, food and art world, and created the Chef’s Week PDX as a means for like-minded chefs to collaborate and celebrate their talents. It’s got elements of some of your favorite reality shows: about 30 chefs share the same house or hotel, like Real World; and they use local ingredients to make secret, all-new dishes with their flair and expertise, like Top Chef (but without the drama).

If you want a seat for next year, keep checking with Maui Chefs Invitational. See you there!