When people think of lodging in the far north, they often envision the famous ice hotels and glamping igloos. Well, guess what? There are no ice hotels in Iceland! You can only find them in Canada, Sweden, Japan, Finland, Norway, Romania and Switzerland. 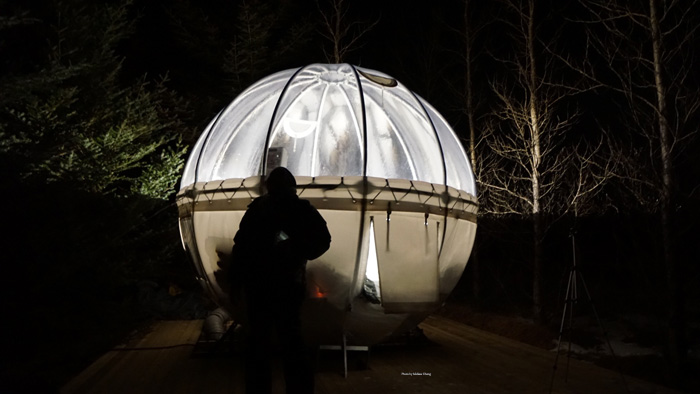 Deb in front of our Buubble!

My resourceful travel buddy, Deb Aoki, found something similar and warmer in the Buubble (yes, that’s how it’s spelled), a transparent, round tent in a forest that enables you to sleep under the stars. You can choose to book the accommodation by itself, but since it’s very remote, you get a better deal by booking the whole Golden Circle Tour package. Accommodation only is about $280, total. The whole Golden Circle Tour package is $500 per person, but since you will be booking a Golden Circle tour anyway at some point in your trip, you might as well do it all at once.

We were booked with a trio from New Jersey — Melanie Jawa, her daughter and friend — and at the end, we agreed it was well worth the money, especially for first-timers to Iceland. We were super lucky, as the forecast said it would be cloudy, but the skies were clear the whole time. Here’s how the day went: 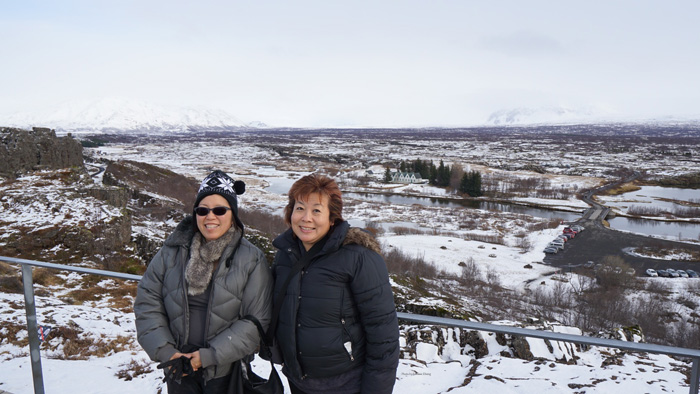 The first stop is Thingvellir National Park, also known as “the parliament fields.” Back in the day … oh, about year 930 or so, the general assembly was established and the island residents would come in from every region to convene until 1798. Remember, this was back in the old Viking days, so it took some people two weeks to get here. Laws were passed, people were judged, and many major historical events happened in this place, so Icelanders hold this area in high esteem. You can read more about the history, here.

Thingvellir is one of only a few places on Earth where you can observe a continental drift valley between the North American and Eurasian tectonic plates. 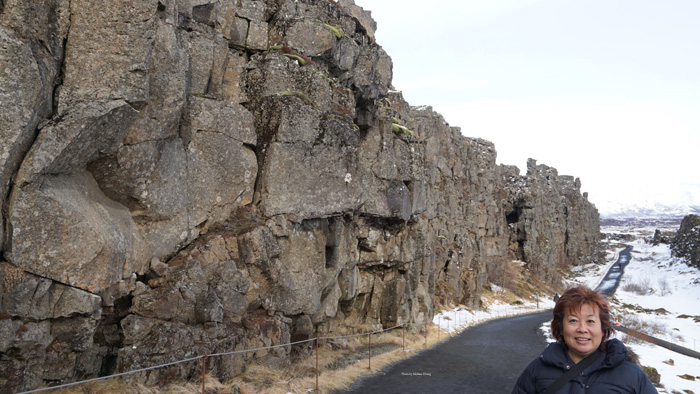 And for those of you not into history, this area is apparently a film site for the popular “Game of Thrones.” I don’t watch the show, but there are companies that offer “Game of Thrones” tours. 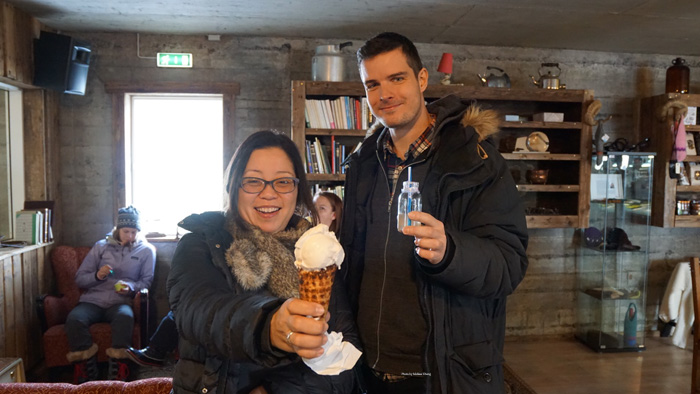 Deb with our guide, Attila the Hunk. He’s drinking a whey protein shot from the farm, which is mildly tart and very good for you.

We took a little detour to get ice cream at Farm Hotel Efstidalur, which makes fresh ice cream and other dairy products. Remember, most of Iceland is very rural, so you can often get farm-fresh products. 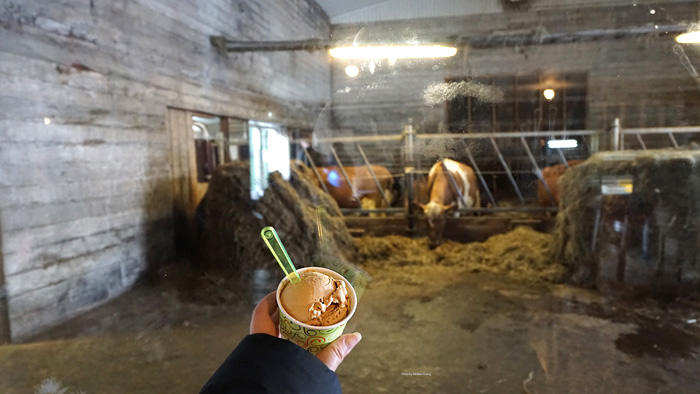 You can eat your ice cream while watching the cows in their barn. 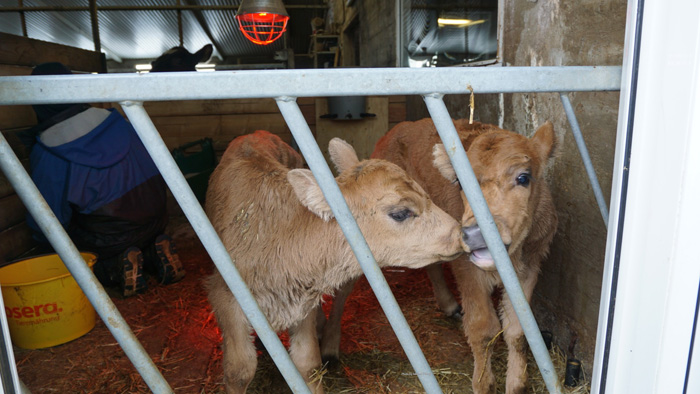 These calves were born just one or two days prior. They were still learning to walk and very curious.

From there, we headed out to the famous Geysir hot spring area in the geothermally active valley of Haukadalur. The most active geysir (note: geysers take after the Icelandic name) is Stroker, which spouts every five to 10 minutes. It’s fun and not terribly exciting, but it’s interesting to learn about the geological shifts that create these natural wonders. 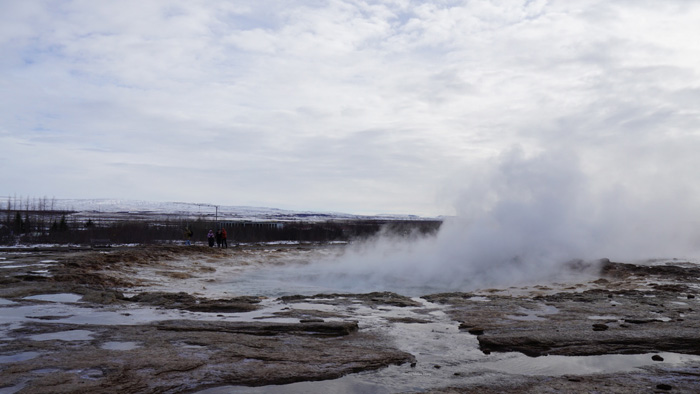 Steam billowing from one of the hot springs in Geysir.

We didn’t have time to take a horse riding tour, but at least Attila stopped at a farm along the way so we could spend a little quality time up close with Icelandic horses. Their hair looks coarse, but it’s actually really soft! 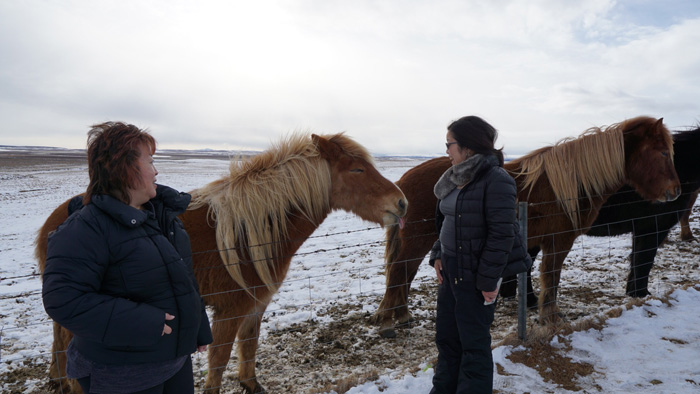 “Hello, Thor, how do you feel about having 2 million visitors invade your island home this year?”

Icelandic horses have been around for centuries (since around the 800s) and through selective breeding and natural selection, they developed into the unique breed we see today. They also display two additional gaits not seen in any other horses in the world. Due to the fact that they’re so special, and have few diseases, Icelandic law prevents other horses from being imported and exported animals are not allowed to return.

Note: If you decide to take a horse riding tour, book it early in your trip. Extreme weather conditions may force your tour to be cancelled and you’ll need to re-book. 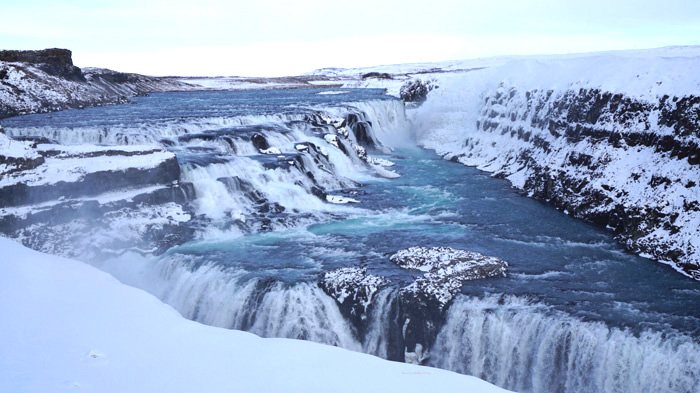 One of the highlights of our trip was visiting Gulfoss (Golden Waterfall), one of Iceland’s most famous waterfalls. There are waterfalls all over Iceland, but this one is particularly spectacular, and if you’re lucky, you may see a rainbow form above it on a nice day. It’s located on the Hvítá (White) river, which is fed by Iceland’s second biggest glacier, the Langjökull. 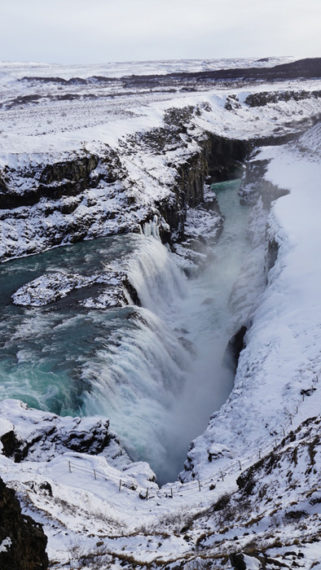 The national park service has set it up to view it from below and above, so you can see the three-tiered “staircase” of the falls and the subsequent canyon it flows through. My photos aren’t super sharp because there is a constant mist and intermittent winds blowing it at you; since it’s so cold, a lot of the mist turns to ice and sandblasts your skin.

Gullfoss is significant in Iceland’s history for launching their first environmental activist: In the early 20th century, foreign investors wanted to harness the power of Gullfoss to produce electricity. In 1907 an Englishman named Howells tried to buy Gullfoss from Tómas Tómasson, a farmer who owned Gullfoss. Tómasson declined Howells’ offer but later leased it to him. Tómasson’s daughter, Sigriður Tómasdóttir, protested and tried to have the rental contract voided, hired a lawyer in Reykjavik to defend her case (for several years), even threatened to throw herself into the waterfall. Her attempts failed in court, but the contract was eventually voided due to lack of rental payments. Sigriður’s environmental activism is memorialized in a plaque near the waterfall. 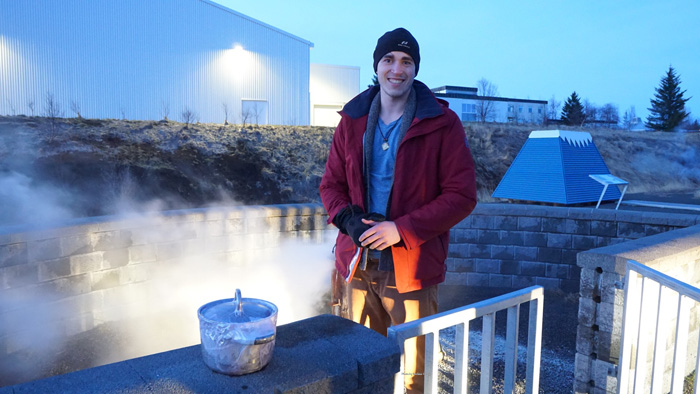 On our way out to dinner, we stopped to visit Peter, who was baking Icelandic rye bread in a hot spring. This is actually one of the ways the residents can cook using natural energy, since there are hot springs everywhere! It takes about 24 hours to bake this bread, though: They put the dough in a heavy metal pot and wrap it tightly, then lower it into the hot water.

We then headed to Mika, a popular local restaurant in Reykholt. Dinner isn’t included in the tour, so that is an added cost. Everything was good — nothing mind-blowing, but all fine. Keep in mind, this is a typical local family restaurant, not fine dining. Now look at the prices, which are also typical. 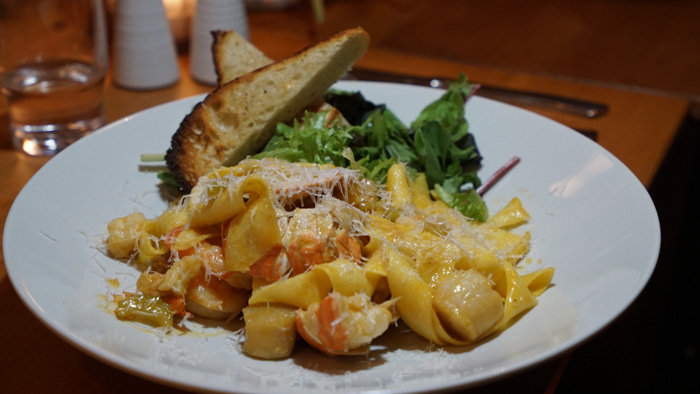 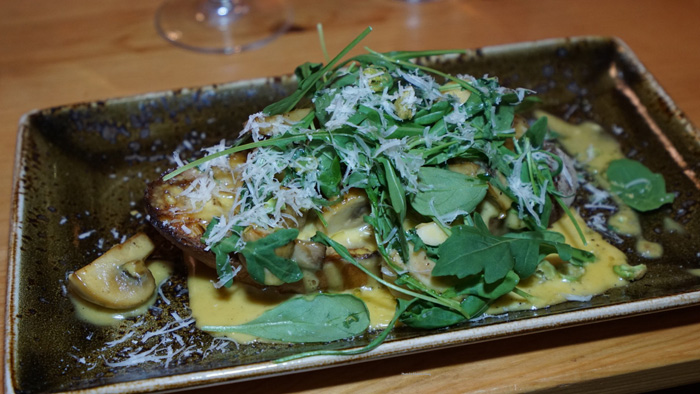 Bruschetta topped with mushrooms from a local farm, blue cheese and arugula (1690 KR, about $16). 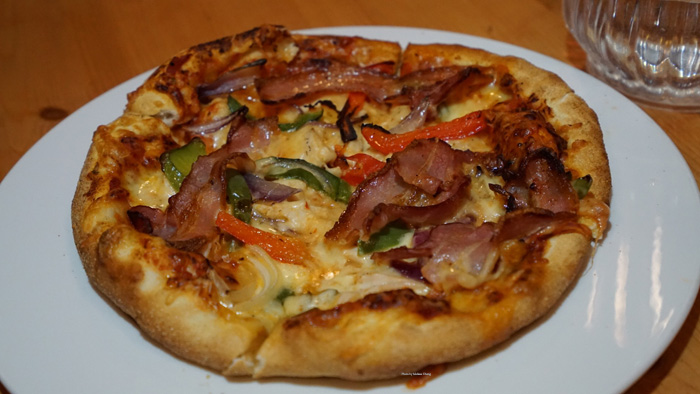 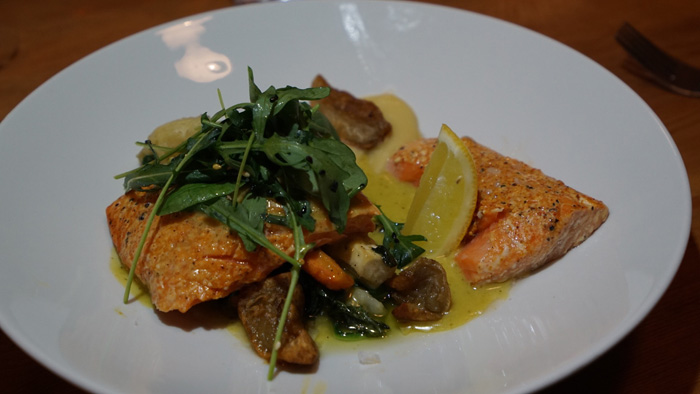 Attila’s fish of the day, which he said is his favorite. But it’s “market price.” 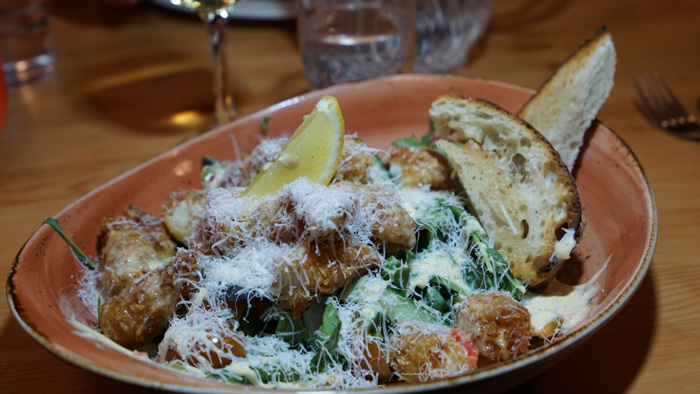 Langoustine salad: Crispy langoustines with mixed vegetables and a white chocolate-chili sauce (3890 KR, or about $38). 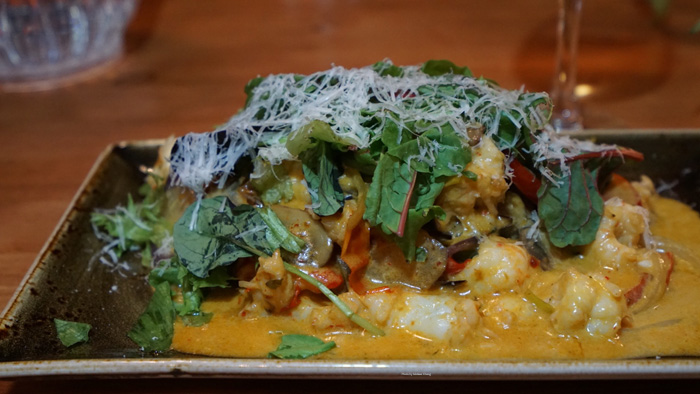 Bruschetta topped with langoustines and rucola (2890 KR or about $28).

Just to remind you, it’s cheap to GET there, but it’s very expensive to BE in Iceland. The prices at Mika are no different from anyplace else, except the hot dog stand. More on that later.

Our final stop before heading to our Buubble was the Secret Lagoon, a local hot spring facility. They cater to tourists, but since it’s so remote, it seems like a place that quite a few residents frequent. 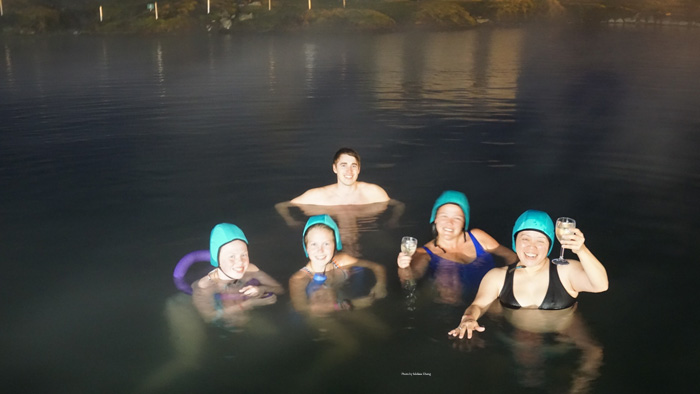 Remember the bread baker, Peter? He was also our personal pool boy, and provided us with prosecco, water and underwater massages. Yes, that’s included in the package. Although it’s easy to back float on your own, the swim caps we used were actually better for floating during the massage and helping with underwater acoustics, since they pipe in relaxing spa music. 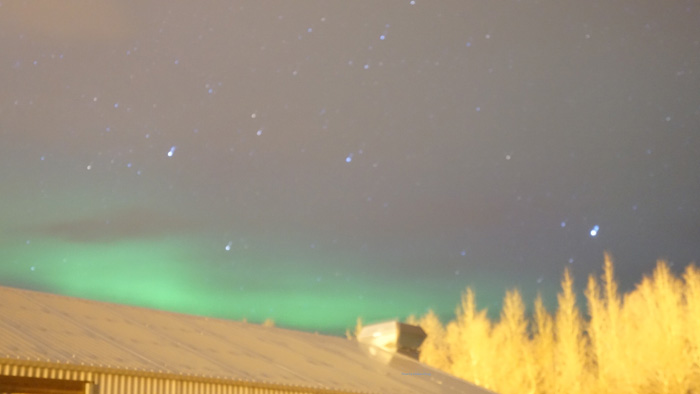 While we were still soaking, the aurora borealis came out. Attila started running around excitedly with his camera, yelling and very pleased that we got this bonus on our tour — the weather forecast had showed that we wouldn’t be able to see it.

It was 25 degrees, I was soaking wet in my swimwear, and didn’t know if I had time to get dressed before the light show disappeared. So I ran in, got my tripod and camera, and hastily set it up in the dark. I had previously printed out instructions on how to set my camera for the aurora borealis, but since I was freezing, wet, and rushing, I had no choice but to shoot and pray. As you can see, my only “decent” photo of the lights is just as shitty as the one I took five years ago when I was shooting with no tripod in my pajamas in Alaska.

But you know what? It’s all good. I got to see the aurora borealis twice in my lifetime. This show was actually better than the last one, and lasted quite a while, maybe 20 minutes or so.

TIP: You usually can’t see the colors of the aurora borealis with your naked eyes. The colors come out in photos, and only shot with a camera, not a phone. So Google the proper aurora borealis settings for your specific camera before you go. 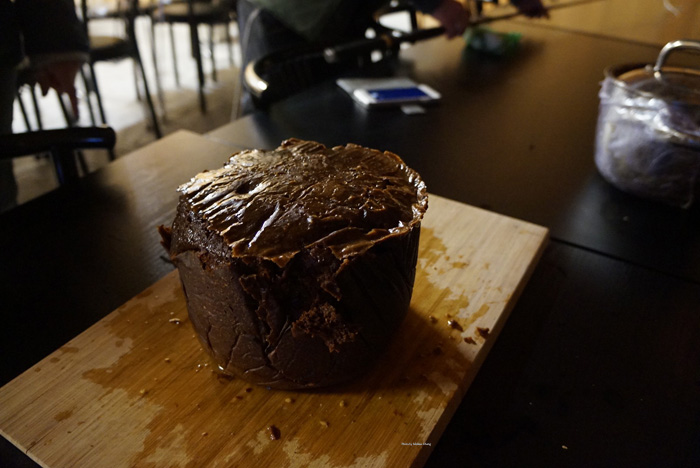 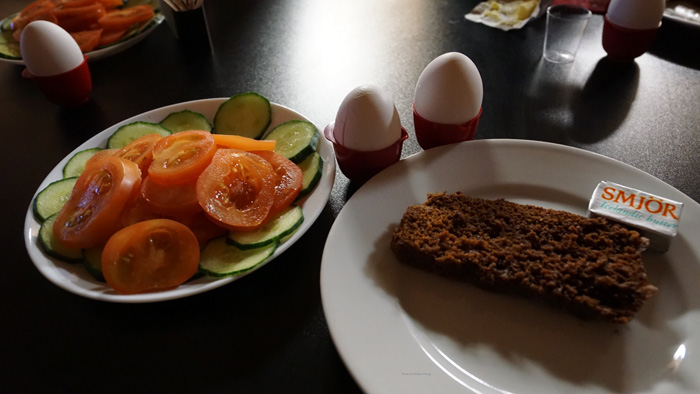 After showering and changing, we took some eggs out to the hot spring on the side, which is hotter than the one we soaked in, and made six-minute eggs. Then Attila cut the bread they baked in the hot spring and served it with butter, plus vegetables from local green houses. We absolutely loved this snack! The eggs were boiled to perfection, and the bread was soft, but chewy, and had a nice, mild flavor (kind of like squaw bread). 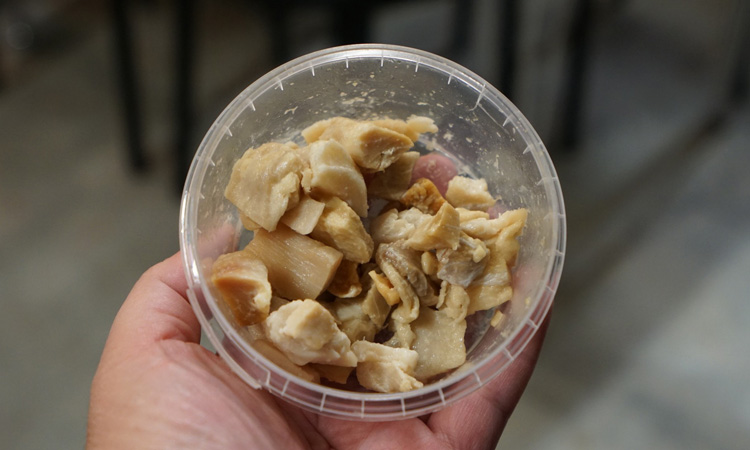 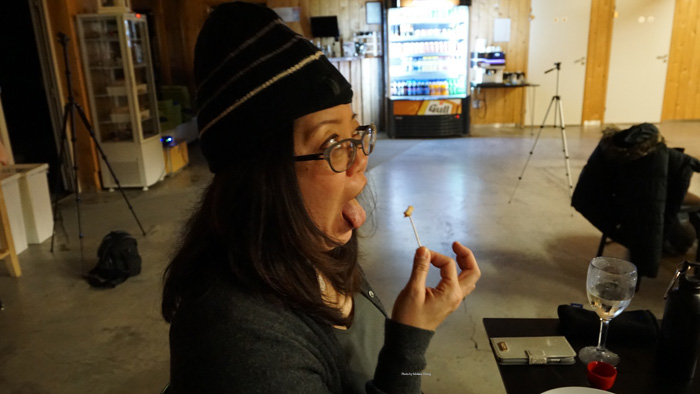 And then … the dreaded fermented shark. You’ll see this on a lot of Icelandic menus, and it’s apparently not something locals eat anymore. But it is sold everywhere, probably for the tourist novelty. Attila opened a container of it, and the smell was so strong, I nearly fainted. I hardly ever decline to eat anything new, but I almost passed on this one. It was worse than durian, I think. But oddly enough, it didn’t taste anywhere near as putrid as the smell — it was slightly vinegary, and had the consistency of abalone. Maybe. We all washed it down with Brennevin, which is Iceland’s exclusive vodka. Yes, all of that is included in the package! 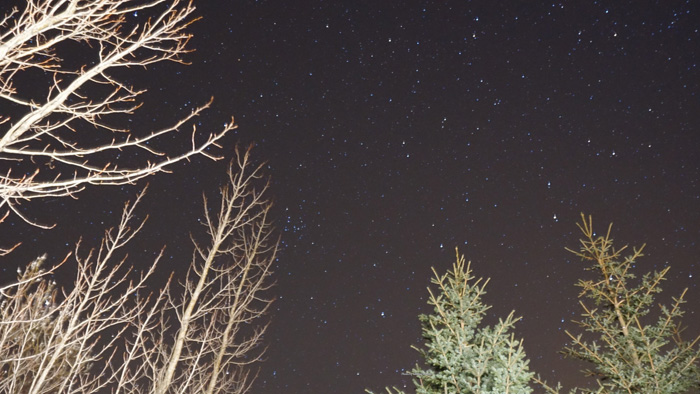 We ended our night by sleeping under the stars in our buubble — this is the view.

The globes are actually glorified tents, so the whole thing is basically taken up by the bed. Ours fit two people comfortably, but we could probably squeeze one more person in. The trio from NJ slept in a larger buubble. There is a separate “service house” nearby with bathrooms, showers, a mini kitchen and a table to sit on, as well as electric outlets for recharging. Your buubble also has a couple of electric outlets, but they are used for the heater and (if you need it) electric blankets. It was comfortable for Deb, but I had four blankets piled on me and I was too lazy to plug in the electric blanket, so I froze (it was 22 degrees). All the buubbles are situated far enough from each other that you get complete privacy.

But what about the polar bears? Isn’t camping in the wilderness risky? There are no wild animals in Iceland. The only animals you’ll find are sheep, mink, Arctic fox, horses, deer, and maybe some cows. Iceland is definitely the safest place on earth! 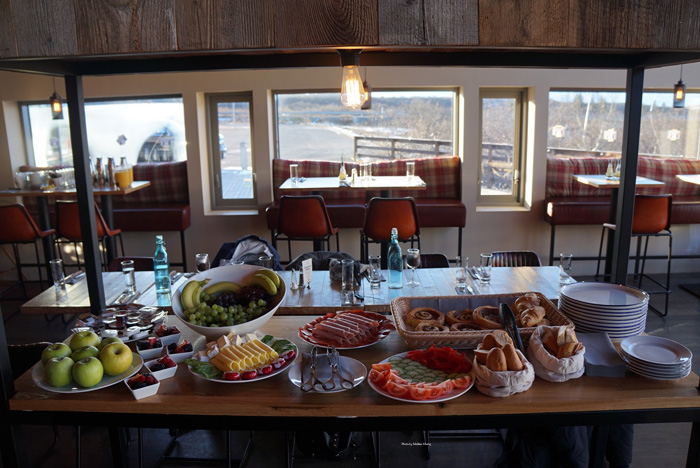 This is our view and breakfast at a hotel along the way home. Not bad!

For more information on the buuubble, click here. No one paid me for this review, but as you can see, Iceland is so expensive that I wish they did.

Up next: The trek to Jökusárlón glacier lagoon and ice cave. To see more from our trip, click here or check out the #AlohaIceland hashtag on Instagram.