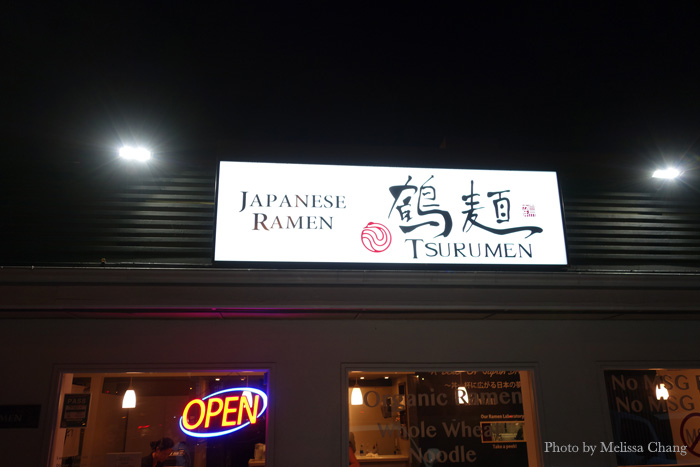 When Tsurumen first opened on Kapahulu more than a year ago, I went for lunch but wasn’t going to do a blog post. It was too soon, and the food didn’t seem ready yet. But so many people asked about it, I did a quick review. It was lukewarm at best, and I never felt compelled to go back since there are so many other good ramen spots in Honolulu.

Well, owner/chef Masuo Onishi realized there was a problem. His friend, beautician Izumi Nagahama, was pretty straight with him about the fact that she didn’t like his ramen: the broth was weird, the noodles gummy. So in January, he overhauled the menu and improved the broths, reworked the noodles and created a higher-quality product. The biggest change, which makes him unique, is his elimination of all MSG from the restaurant. 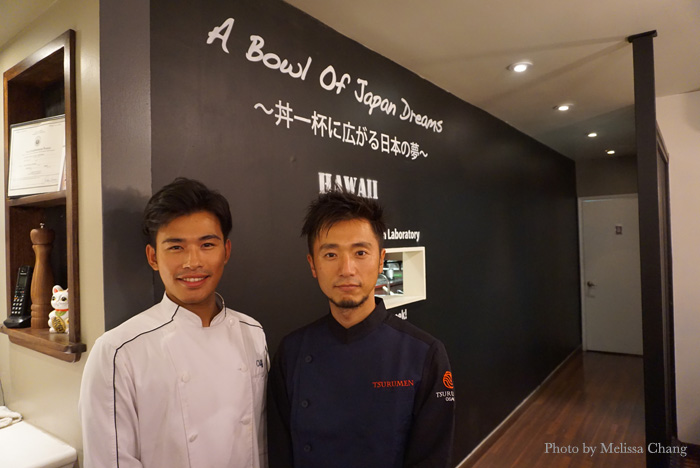 Izumi went back, and found that his ramen had greatly improved, but business was still slow. Remember, the chef is a ramen artisan, not a marketeer, so although he had extensively changed the menu, no one knew about it. He had been thinking of closing, but Izumi told him to give it one more shot — after letting some foodies know about it. So, she invited me and some others for dinner — which was perfect, because we could order everything on the menu (below) and just take a taste of each. 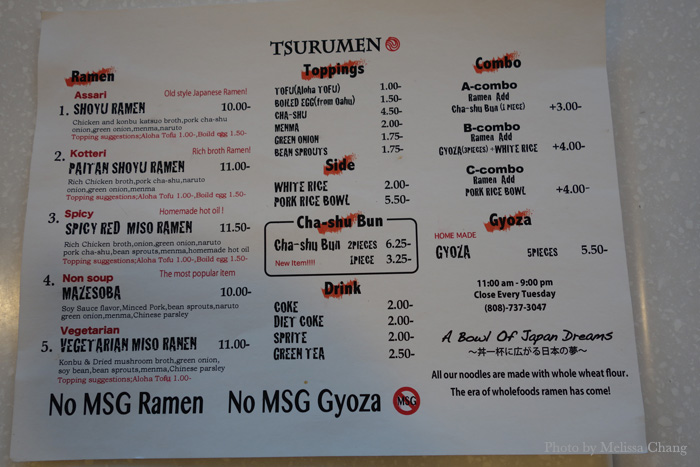 The new menu at Tsurumen. Whatever you ate before, doesn’t exist.

All noodles are made with whole wheat flour by Sun Noodle. 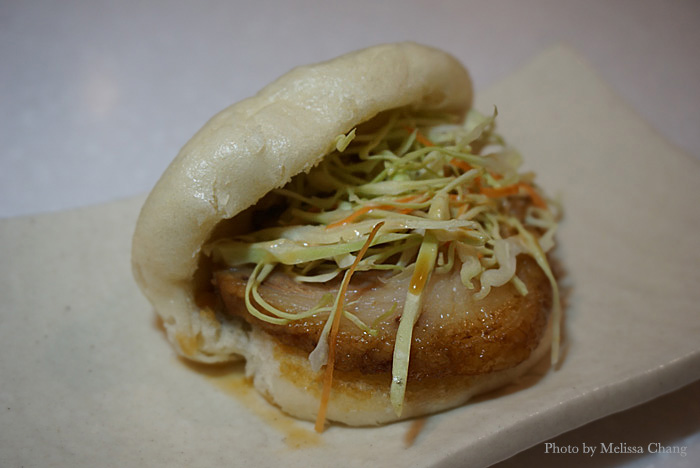 You’ll probably start with the pork chashu bun, which is dericious. I’m not sure it’s worth $3.25, but if you get caught up in the frenzy as we did, you’ll order it and forget the price. It’s got great flavor, and the slaw helps to counter the rich, fatty pork. 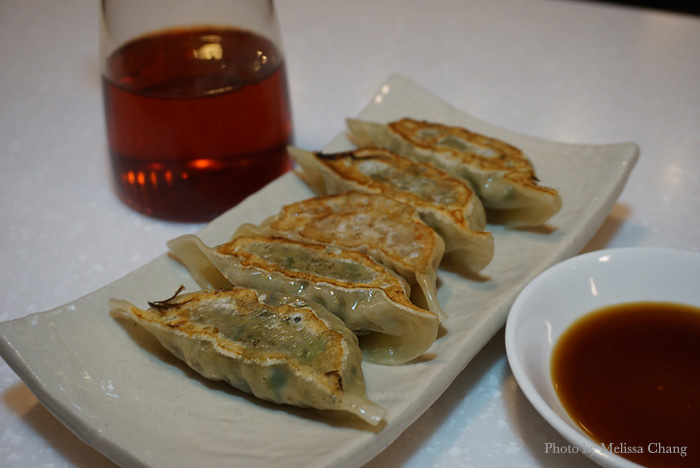 I really liked the gyoza. These are packed with chives, ginger, onion, and pork, so although it’s more vegetable-y in flavor, you still get good pork essence in each bite. You can dip it in shoyu and vinegar, and add some of the house-made chili oil. 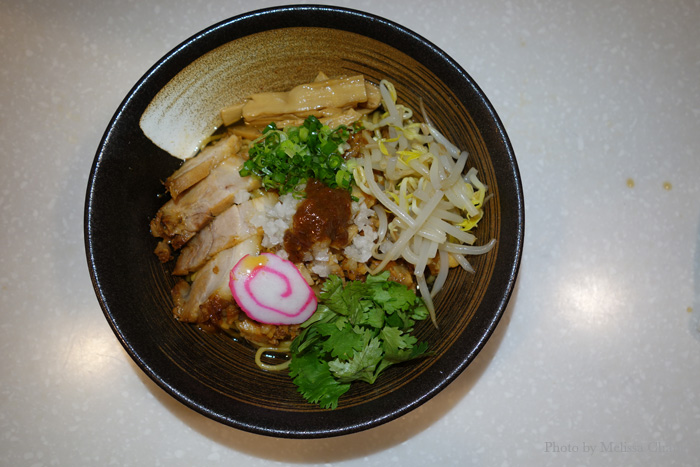 I’m going to jump to our favorite of the night, which was a surprise to us all. The soupless mazesoba, also known as abura soba, is noodles with sprouts, pork, fishcake, cilantro, bamboo shoots, white onions and green onions. You mix it all up, then eat. You can add some rice vinegar, which actually adds a little tartness and brings out the sweetness; then add some chili oil. This is really tasty, full of flavors and textures. Our Japanese friends told us this dish is popular in Japan. 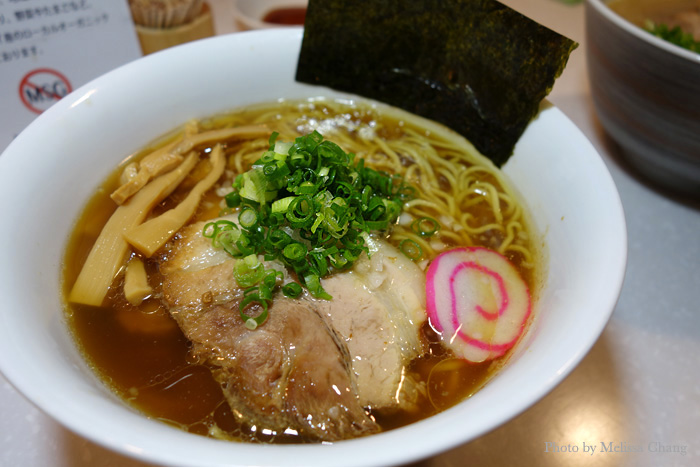 If I had to eat a bowl of soupy ramen myself, I would probably go with the shoyu ramen. I don’t usually order this, but Tsurumen’s broth has richer flavor than other restaurants (see video, below), yet is still light so I might be able to finish the whole bowl. The noodles are thin, not gummy, and easy to slurp. If I have this again, I’ll order it with a boiled egg. 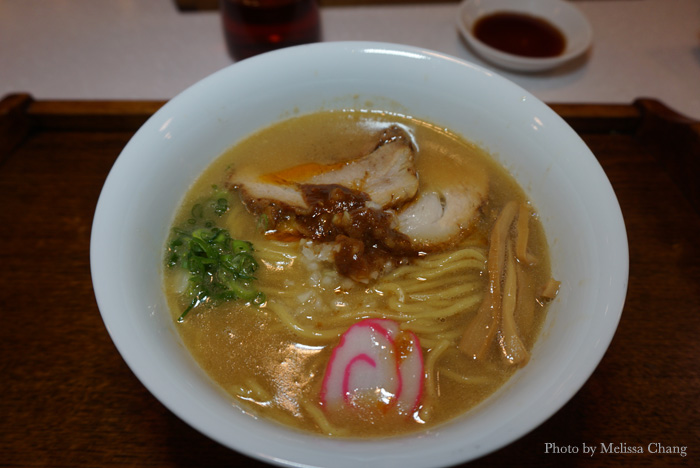 The guys favored the kotteri paitan shoyu ramen, which is a rich, thick chicken broth with all the fixings. I liked it, too, but I don’t think I can eat a whole bowl because it’s so hearty. I could probably split this and get gyoza. 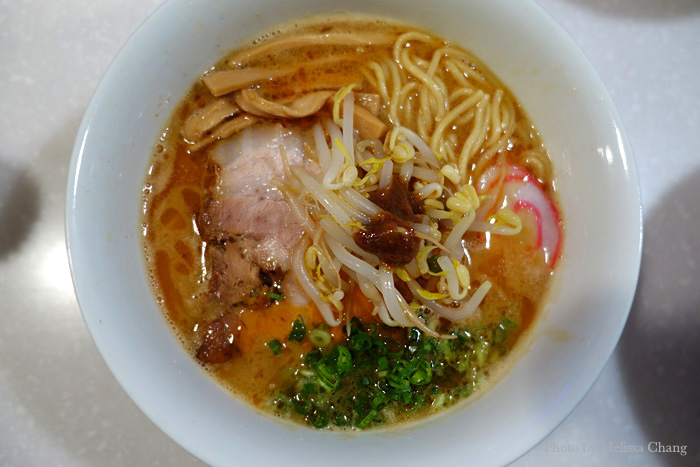 I enjoyed the spicy red miso ramen, but I would want the option to turn up the spicy heat if I wanted. It had a kick, but I think they were careful not to make it too strong so it wouldn’t overwhelm the other flavors in the bowl. Don’t get me wrong, this was delicious — but I know people will want to raise the spice level. 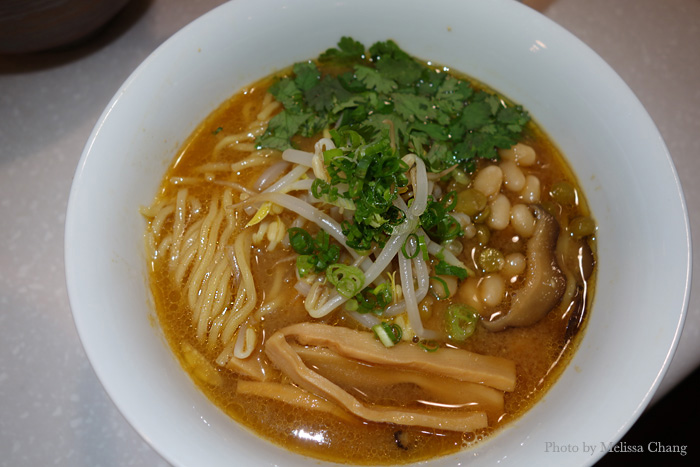 The vegetarian miso ramen was good for what it was. It’s got a konbu and dried mushroom broth, with green onions, soy beans (not nuts!), bean sprouts, bamboo shoots and cilantro. It’s a good option for our veg friends.

As you can see, the prices are competitive with other ramen restaurants in town, and now the quality is improved so Tsurumen can actually enter the arena with the others. They’re open for business daily, but there is a media event on July 18 from 12 to 3 p.m. and 5 to 8 p.m. where chef Masuo Onishi will be on hand to meet people and answer questions. (Regular customers can be there, too — there’s nothing unusual going on at the restaurant.)

Here’s a clip of chef Onishi making two of our bowls: