The latest Korean movie to play in local theaters is a real head scratcher. Based on the true story of a world famous children’s choir composed of Korean War orphans, “A Melody to Remember” seems like it should be an uplifting and inspirational tale of hope.

Taking place during the heart of the Korean War in the early 1950s, the film follows the story of two orphan siblings Dong Gu and Soon Yi who’ve lost both of their parents. They are sent to an orphanage in Busan where a young Lieutenant named Sang Ryul, an orphan himself, decided to form a choir to help provide some inspiration and direction for the camp’s children whose lives have been ripped apart by the war. If this film was made in Hollywood it would undoubtedly be marketed as family friendly fare. 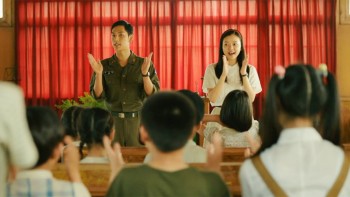 Yet the Koreans are never afraid to take even the seemingly most pure and innocent story and introduce dark elements to it. The film opens with a graphically violent and intense battle scene where soldiers are killed with explosions, bullets to the head and are stabbed repeatedly. As the opening scene that could rival the beach raid from “Saving Private Ryan” unfolded, I wondered if I actually was watching the right movie. It definitely wasn’t the film I was expecting. Then later, a character is introduced who is a pedophile and tries to seduce a couple of the young female orphans.

What the hell was I watching?

With such a tragic history, Koreans love to show their mettle and prove how much tough they can be to endure the harshest of circumstances. This is evident in many of their greatest films. As with anything else, that kind of struggle has its time and place and I’m not sure a film about young children singing their way into the hearts of the world is the right venue to portray such dark story elements. 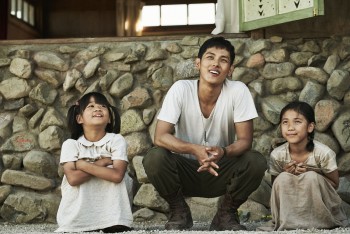 I honestly think there was a great story to be told here, especially knowing that this was a true story, but the film just couldn’t find its focus. The children should have been more of a focal point but they are treated almost as an afterthought and act merely as a vehicle to serve the meandering plot. There is hardly any time spent showing how Sang Ryul teaches the orphans how to sing and we don’t get to really know any of them outside of the two main children.

Then there’s the villainous character named Hook, who is introduced for the sake of having a “bad guy” type in the film. He was injured in battle and runs a shantytown where he uses the orphans for his own benefit. The film would lose nothing if he ended up on the cutting room floor, as he only takes screen time away from the main story line.

What's on the menu at Saturday's Korean Festival