If you go to Dubai, leave some time to take a day trip to Abu Dhabi, which is about an hour and a half drive away. The main attraction there is the Grand Mosque Sheikh Zayed, which blows away all of the other mosques in the area.

You see, since it’s a very conservative, religious culture, there are mosques everywhere in the Middle East, to accommodate people who need to pray … and they need to pray several times a day at specific times. Citizens still have to deal with the hustle and bustle of every day life, so instead of planning their day around prayer, they can pray where they are — they even have the call to prayer broadcast over the public address system in the malls — with convenient prayer rooms and small mosques. 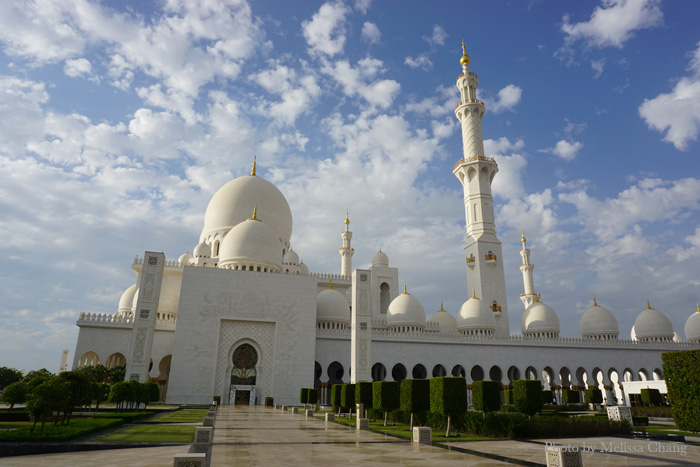 The Grand Mosque Sheikh Zayed during the day.

Abu Dhabi is the capital city of the United Arab Emirates (UAE) and is considered to be the key for worship in the country. The Sheikh Zayed Grand Mosque (Arabic: جامع الشيخ زايد الكبير‎) was built from 1996 to 2007 by the late UAE president, His Highness Sheikh Zayed bin Sultan Al Nahyan, who wanted to establish a structure to unite the cultural diversity of Islamic world, the historical and modern values of architecture and art. Of course, it is the largest mosque in the UAE, measuring about 960 feet by 1,380 ft., covering an area of more than 30 acres (not counting the exterior landscaping and parking lot). 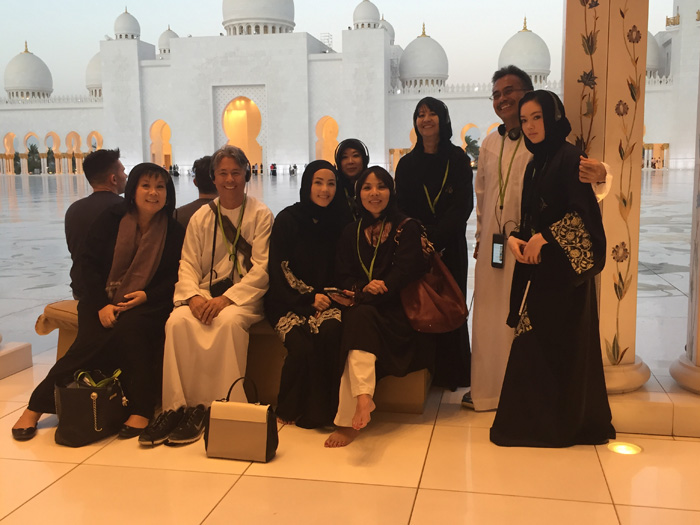 Our group in appropriate prayer attire.

If you’re not Muslim and don’t have the right clothes, don’t worry. They have separate areas for men and women to borrow the right robes. It’s best, though, if you are conservatively dressed underneath, to be sure every bit of skin is covered — Selena Gomez was criticized recently for allowing her ankle to show. Men are given a kandura (the white robe) but aren’t required to wear a guthra (the head covering). Women are given an abaya, which comes with a hood so you can cover your hair, but you can bring your own shyla, which is the scarf you see many Muslim women wearing. 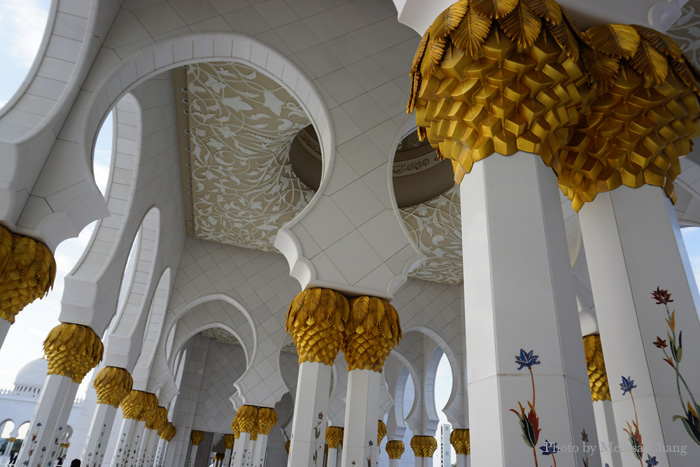 The intricate pillars look like pineapples, and are inlaid with semi-precious stones that create flower patterns throughout the mosque. 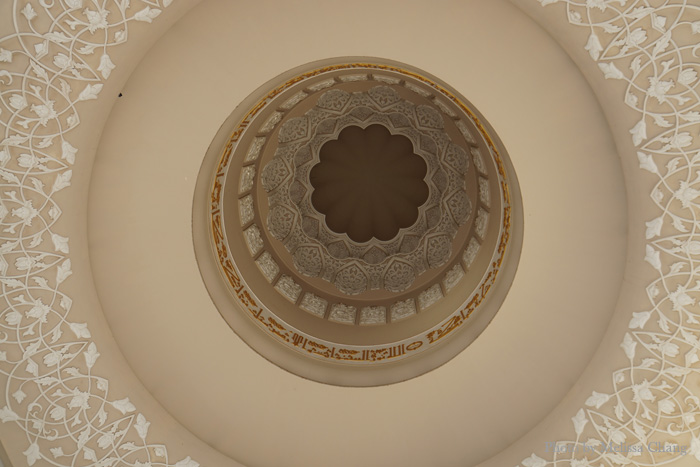 The lettering in the domes are so ancient and intricate, that many people cannot read them. 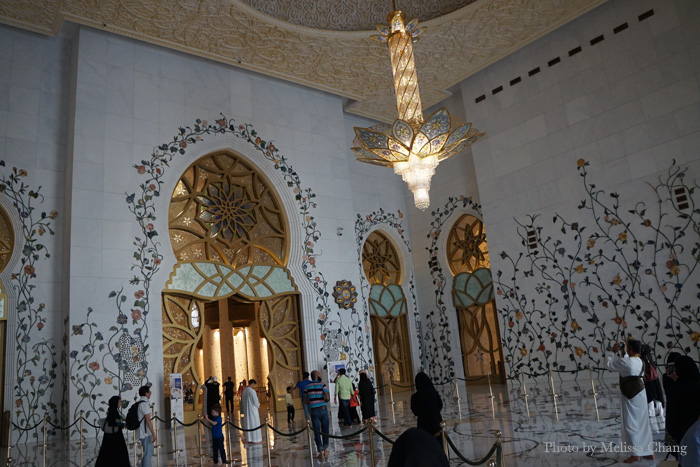 The foyer leading to the main prayer room. 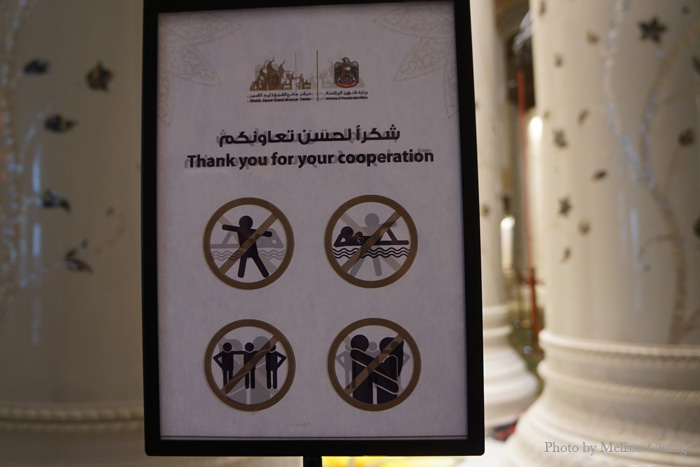 Don’t you love the tourist warning signs? We actually saw some tourists violating these rules while we were in the prayer room!

The carpet in the main prayer hall, designed by Iranian artist Ali Khaliqi, is the world’s largest carpet at 60,570 square feet. It was made by about 1,200 to 1,300 carpet knotters via Iran’s Carpet Company with 2,268,000,000 knots within the carpet. It took approximately two years to complete. There are some distinct lines on the carpet that look like seams, but they are actually markers to show you where to kneel.

There are two smaller prayer halls, each with capacity for 1,500 people, of which one is exclusively for women. And, there are several giant prayer clocks to let you know what times of day today you need to pray, so there’s no mistaking when your next prayer is going to be.

I couldn’t catch the whole call to prayer, as it caught me by surprise, but here’s a partial recording so you can get a sense of the ambience when it happens. Most places have a normal sounding man calling people to prayer; here, the guy is definitely a trained operatic professional. 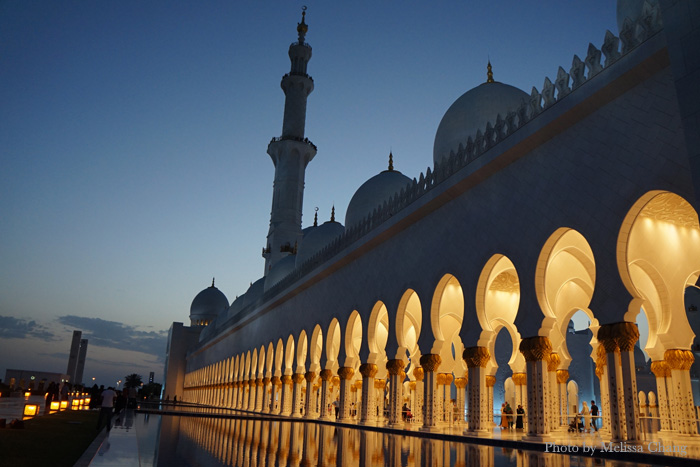 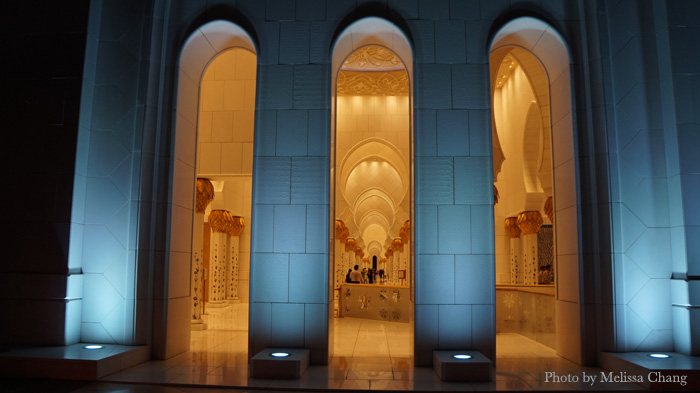 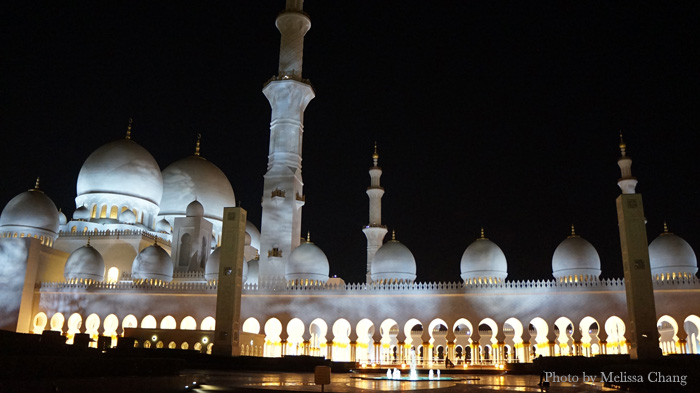 The best time to go is probably about 4 or 5 p.m., so you can tour the mosque until sunset. Then you can get some fantastic shots from a different perspective.

Abu Dhabi isn’t all about worship; there are some hedonistic things to do, as well. One of the main attractions in Abu Dhabi is Ferrari World (Arabic: عالم فيراري أبو ظبي‎), the first and only Ferrari-branded theme park and has the record for the largest space frame structure ever built. Of course. 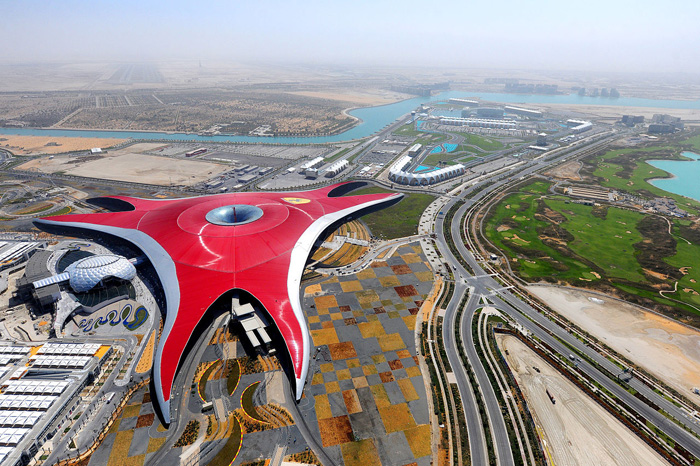 In addition to go karts, rides, and restaurants, there are four roller coasters, including the Formula Rossa, the world’s fastest (a fifth one is slated to be finished this year). Kyle and Val had to — had to! — ride these multiple times, since Kyle is into roller coasters. 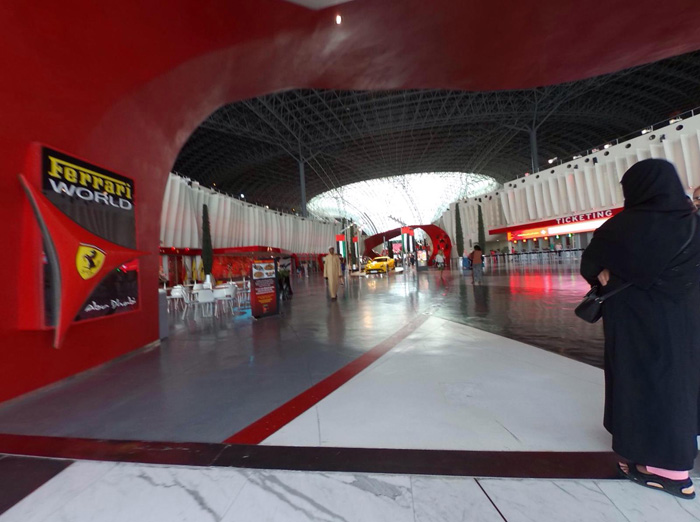 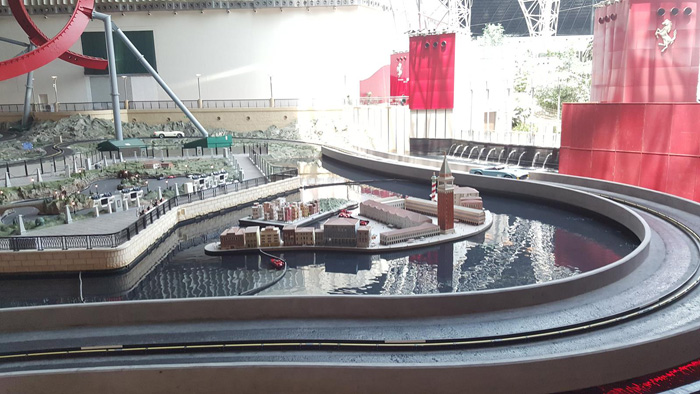 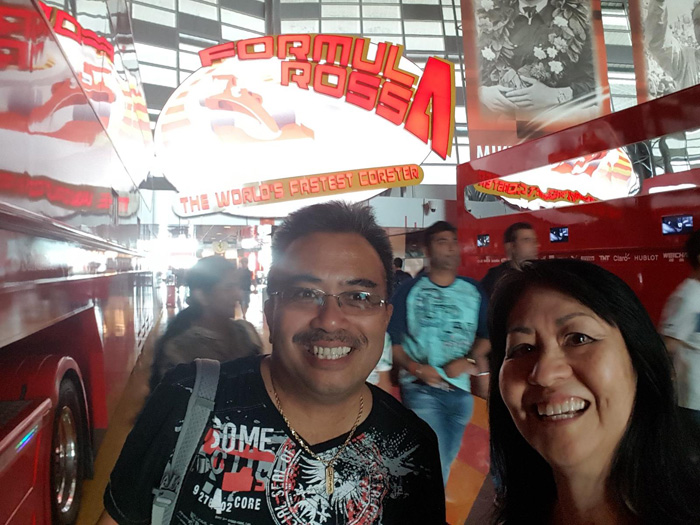 These photos were taken by Kyle. I, on the other hand, am not into roller coasters, so headed off to find the souqs with Nadine. 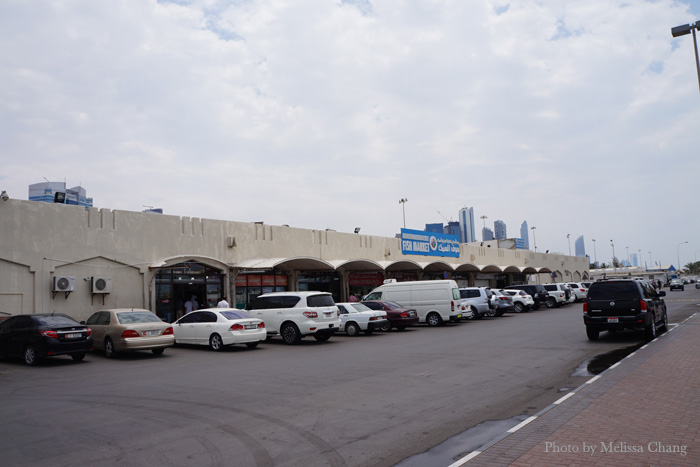 The main fish souq is at Mina Zayed, by the main port area. It’s about 15 to 20 minutes from Ferrari World by cab. I’ll tell you now, this isn’t really worth the cab ride unless you are super into it, or going shopping. If you have your own car, then maybe it’s worth a look. There’s not enough variety in the market to make you want to stroll around. 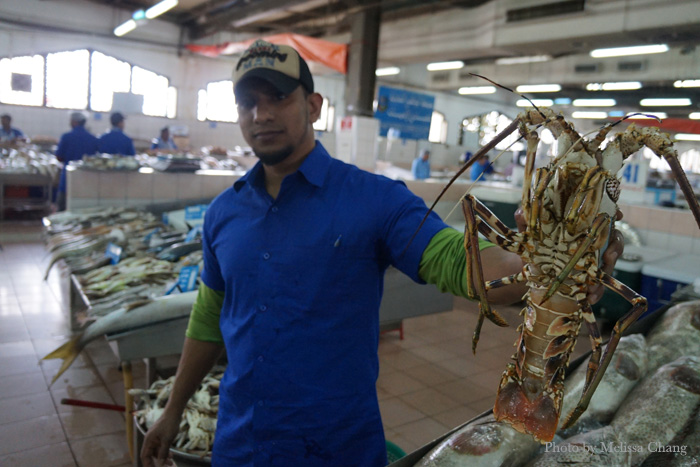 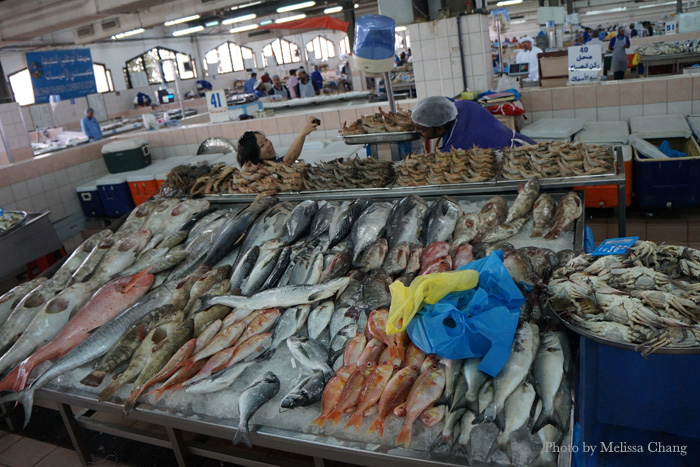 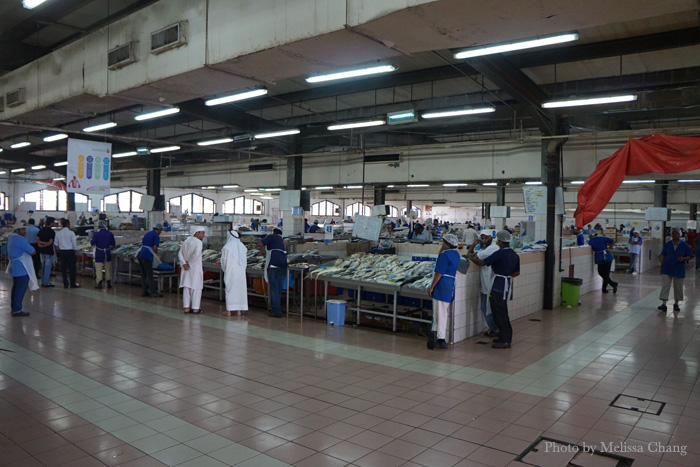 The market is a huge sales hall, and the salesmen here are almost as pushy as the ones at the spice souqs. But once we explained that we were tourists and not interested in buying, they were happy to show us their fish and pose for photos. 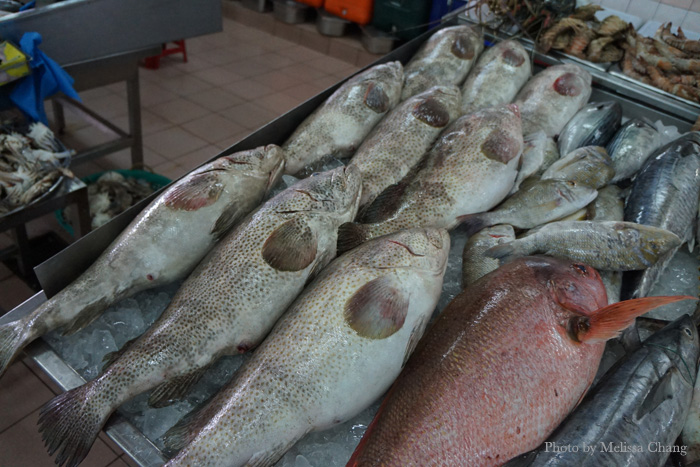 These are the hamour fish that are popular in restaurants. 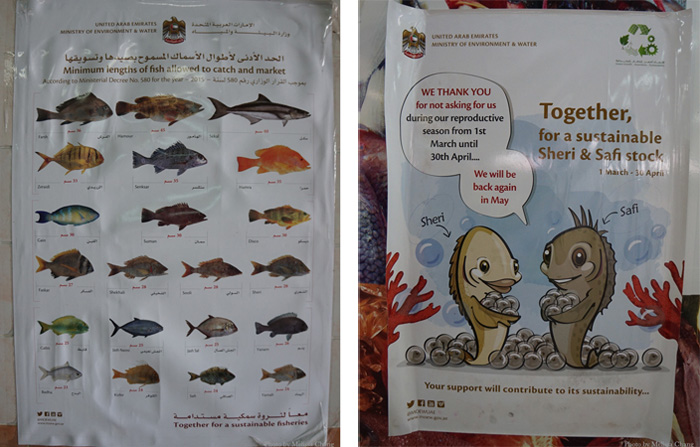 I thought it was neat that they had a sustainable fishing poster, much like the one we have here at the United Fishing Agency. 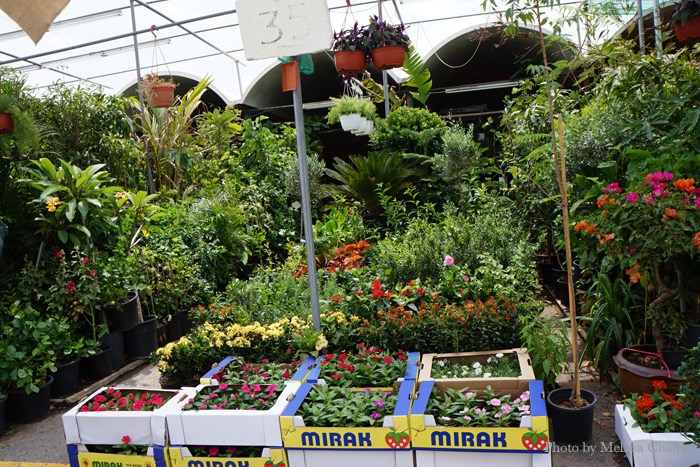 Across the gravel lot, you’ll find a plant souq with mellow salespeople, but who can’t help hassling you as you walk by. 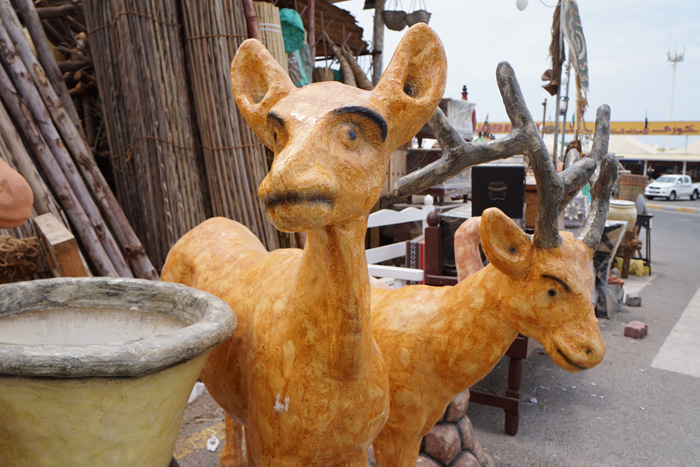 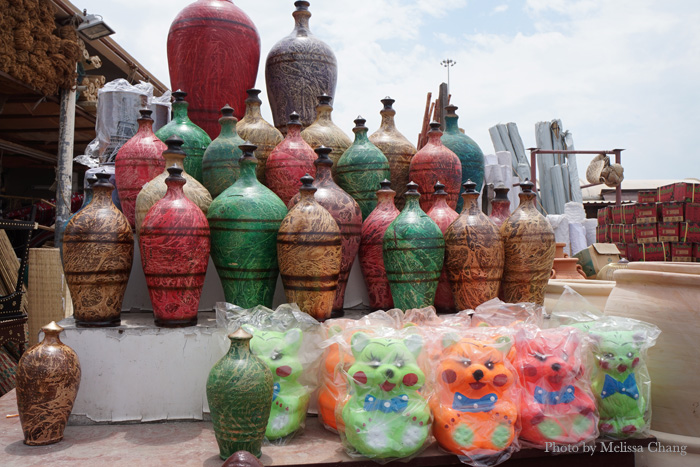 They also sell hideous landscaping accessories. But I had to show you! 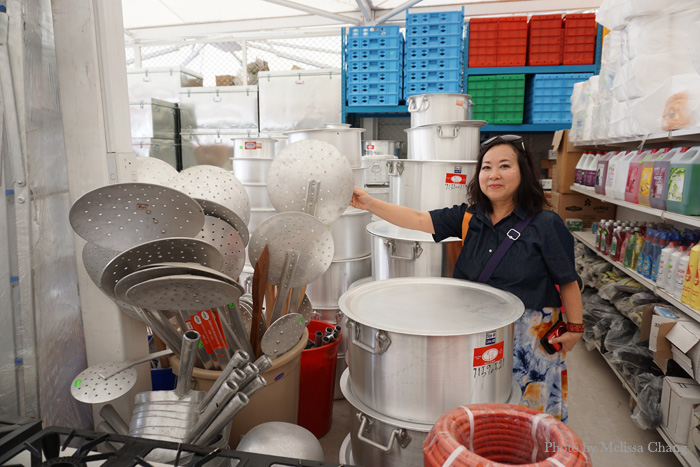 And across another lot from that, you’ll find a market with household goods, like pots, pans, glassware, utensils, stools, and more. They have a whole section for industrial-sized cooking vessels and utensils. 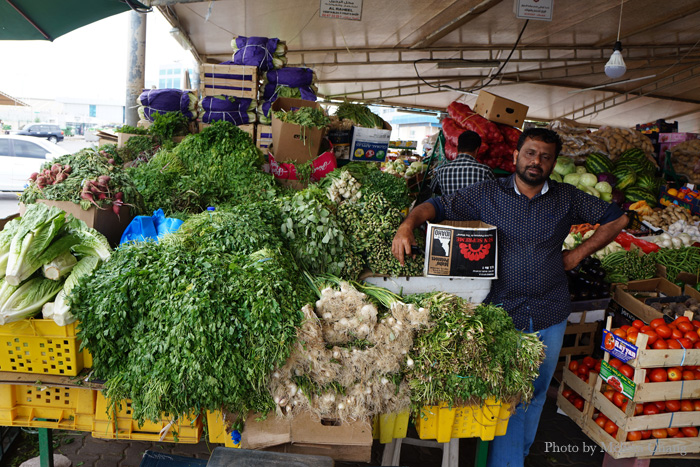 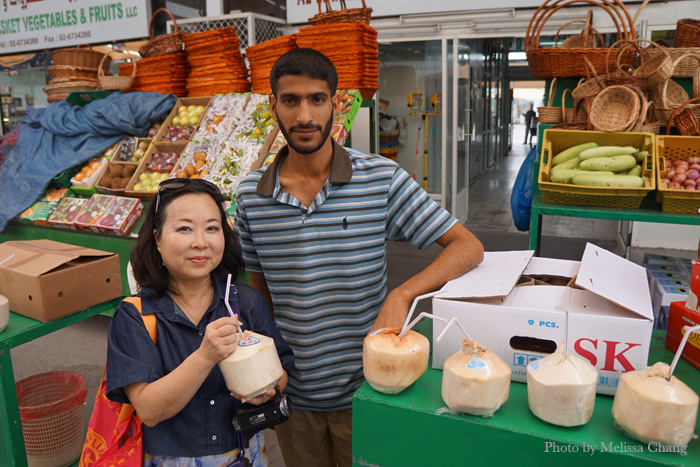 If you go back out the road toward the port authority, the fruit and vegetable souq is another 10 minutes away on foot. They seem to import most of the produce sold here, though. One interesting thing in the Middle East that is different from Asia: Whether you’re buying something or not, if you ask them permission to take photos, they ham it up and ask you to take several. 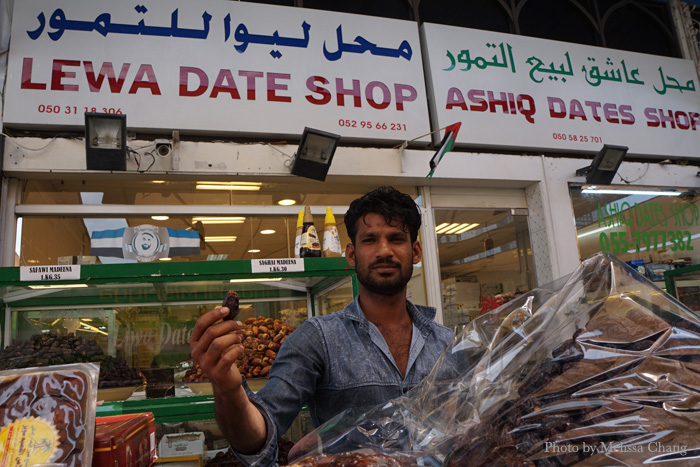 The extensive selection of dates is from the area, so you can sample and buy a lot of that here.

And that was our day in Abu Dhabi! The souqs were kind of a bust, so if you go with a group and sit out Ferrari World, you can always shop at the adjacent Yas Mall and do fine.

Up next: Flying Emirates Air and touring their kitchen, plus some Dubai travel tips!