If you never thought you would see this day, believe me, I didn’t either. That’s why my brain nearly exploded Monday night, when I snuck into the Nonstop content management system for a peek at the lineup for today’s Eat the Street April, and saw the words “saimin OnoPop.”

To be honest, the entire line about new items from the gourmet popsicle maker read, “Kava coconut water Onopop; limited number of Spam and saimin Onopops.” And the corresponding reactions in my brain were “Oooh. Hmmm.” And then total incomprehension. 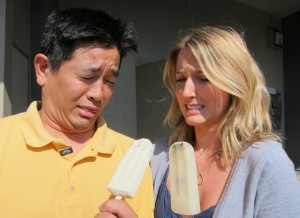 I mean, not to put down saimin (who, me?), but who gets inspiration from a bowl of saimin? It’s obvious somebody does, quite literally, because do you see what’s in this OnoPop? Fishcake (real and rubbery), green onion (real and fresh) and char siu (that part is good). I don’t have to coax much expression from the people in this photo.

OnoPops’ Josh Welch emails back. He says the idea came up when they were looking to get into Spam Jam last year. “Now when I think of the local spam palate, how I most like spam growing up here, the first thing that comes to mind is saimin. Crispy spam heavily sprinkled with shichimi togarashi and floated in home made dashi. And yes, no packet — I made my dashi old school — from konbu and bonito and Oahu tap water. Then comes the texture of a popsicle, which needs at least a little sugar to keep from being icy. So I soaked the crispy, diced shichimi spam, char siu and green onion in raw cane syrup. Dashi is sometimes sweetened with honey in traditional Japanese food (from my reading of Shizuo Tsuji’s ‘Japanese Cooking’), so we used Big Island mac nut blossom honey for that.

“The punchline is when we got into the event this year, and pitched our saimin pops, we were told they were not ‘spammy’ enough. My first suggestion to my brother was to adapt Heston Blumenthal’s bacon and egg ice cream recipe, but once he found out that would require liquid nitrogen, he told me to stop being mental, and just do a candied spam sweet cream ice cream. That’s what Joe’s good for, to encourage me to do things the simple, delicious way sometimes, instead of crazy experimental.” 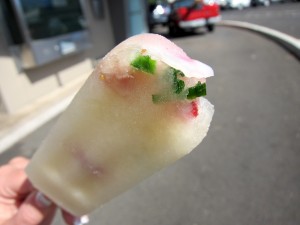 Wow. Good tale of two OnoPops. One complex, thought out and researched. The other, not so much.

Now imagine a hot sunny day, melting on the asphalt of an urban parking lot, and three of you are looking at two icy treats. Spam OnoPop is a non-issue: Everybody wants it (candied Spam? Well, this is Hawaii). Or maybe you all want it because the other choice is saimin.

At any rate, I’m here to report the saimin OnoPop tastes exactly like saimin: wheat, salt, smokey fish … with lots of sugar and fishcake and green onion and fatty, meaty, sweet char siu. It’s bon dance eats on a stick, in a universe turned upside-down. Try it if you dare. It’s the funniest thing you’ll eat all year.

As for Spam? Not as funny. Tomorrow is Spam Jam, after all, and the streets of Waikiki will be flooded with, uh, gourmet Spam delights. Spam OnoPop rightly takes its place among them. It’s creamy and butterscotchy, a perfect flavor backdrop for a candied meat product.

You can find (a limited number of) both saimin and Spam OnoPops at tonight’s Eat the Street April, right on South Street kitty-corner from Restaurant Row, from 4 to 9 p.m., and at tomorrow’s Spam Jam, from 4 to 10 p.m. along Kalakaua.

Me, I’ll be fine. Right after I get this image of the saimin OnoPop out of my head. I still feel weird about the meaty pleasure of chewy char siu in sugary ice. At least I’m still laughing. And I know that the next bon dance I’m at, when I see that Styrofoam cup of hot saimin at a food booth, I’ll wish it were an OnoPop.