In the week since my I hate saimin blog, I learned something important: Saimin doesn’t have to taste good to be good.

What a concept. Not one day has gone by that this lesson hasn’t been hammered home. When islandgirlinnc wrote that saimin was a treat growing up on a plantation on the Big Island, that her mom used to make her saimin for lunch and now she makes it for her son, and then ended with, “It’s okay to not like saimin Mari,” I almost cried.

See also: What is it about saimin? 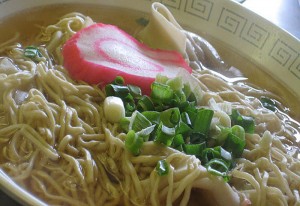 I wasn’t gentle on saimin, berating broth, noodles and toppings with blatant disdain. @dkMOMUS, whom I’ve briefly met twice, tweeted me his friend’s comment: “WTF is Mari’s beef with saimin?”

@ParkRat, whom I’ve also only met once or twice, on Wednesday gleefully tweeted a pic of his dinner. “EXTRA LARGE SAIMIN! No green onions. Want some @nonstopmari?”

When today rolled around with no word from @ParkRat, I began to worry. I was beginning to miss my daily saimin abuse. Luckily, one of my best friends called.

“Mari! I don’t know if I can be your friend any more, now that I know you hate saimin.”

“All these years and I never knew that about you. You cannot hate saimin. That’s sacrilege!”

So I’ve realized. But come on, you really think saimin tastes good?

“That’s not the point. Saimin is the ultimate comfort food. You can eat it when you feel miserable, and it’ll make you feel good.”

Yeah, I got it already.

I understand now there’s a whole category of food whose goodness doesn’t register on the palate so much as in the heart. Leaning over a steaming bowl and breathing in the scents of wheat, broth and green onions whisks people subliminally to a place of security and love. Ed Morita, whose parents took him and his sister to Boulevard Saimin every week until they moved the family to Aiea, said his first taste of the broth as an adult years later made him teary.

Who doesn’t inherently think of their family when they eat a bowl of saimin? Who doesn’t remember fun times with friends before life got serious? And even with jobs and mortgages and other cares, who doesn’t want to pass on that steaming bowl of happiness to their kids?

Saimin belongs in a subcategory of comfort foods that I promise never to diss again. This includes anything you were raised on that melts your heart but boggles the taste buds of others, like ochazuke, or plain jook, or really sour poi.

So I still hate saimin, but I’ll keep it to myself. There’s a whole list of other foods I can sink my blogger teeth into that aren’t hallowed and are vastly overrated.