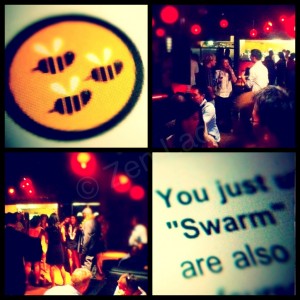 A social media first for Hawaii happened last night at the Nonstop launch party held at Ka Restaurant and Lounge. No it wasn’t the the launch of Hawaii’s newest food, events, and nightlife site or that Nonstop reached the one-million page views milestone less than a month after launching. It was Hawaii’s first ever “Swarm!”

For those of you not familiar with the term “Swarm,” it is an achievement badge from the popular location based mobile app, Foursquare. The “Swarm” badge can be earned by checking into a location on Foursquare with 50 or more people. A simple task that is a lot harder to accomplish than it sounds.

Event planner, Toby Tamaye, who organized the launch party for Nonstop, has been trying to get a “Swarm” badge for a long time. However, no matter how many people attended his events, there were never enough people on foursquare to get the badge… until last night.

Thursday morning, I wake up and check the launch party invite on Facebook to find that over 230 people have RSVP’d to attend. And, it wasn’t just your average club going crowed. These were social media people who not only were active on Foursquare, but other location based apps like Gowalla and Yelp. It was then that I realized that this was as optimal an opportunity for a Swarm than any event before in Hawaii. So, Nonstop started to get the word out that we would be attempting to get a Swarm going at the launch party.

At this point, the entire crowd is a “buzz” about achieving a Swarm. Toby holds his phone above his head and starts dancing in the circle. Then the kitchen doors swing open, and the owner of Ka comes running out saying, “We got the ‘Swarm’ badge!” At the end of the night, 63 people were checked into Ka Restaurant & Lounge on Foursquare making the Nonstop Honolulu launch party the first official Swarm in Hawaii.

As geektastic as achieving the first Swarm in Hawaii was, I’m still a little unfulfilled. Someone pointed out to me that there is a “Super Swarm” badge that can be earned by checking into a venue on Foursquare with 250 or more people. There was an estimated 300 people at the Nonstop launch party Thursday night. A “Super Swarm” could have easily been achieved if everyone there were on Foursquare. Now that Hawaii has achieved its first “Swarm”, the “Super Swarm” is within reach. At the next Nonstop party perhaps? Don’t forget to check in!